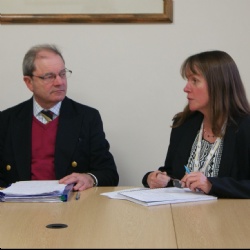 On Friday 3 March, Headteacher, Chiquita Henson, invited The Cotswolds‘ MP, Geoffrey Clifton-Brown, to meet with her and other local headteachers to talk about the government’s recent consultation papers ‘Schools that work for everyone’ and the proposed national funding formula for schools.

At the meeting all of the headteachers made the point that the newly proposed national funding formula was anything but fair. Mr Evans – the Head of Farmor’s School – said that on current projections, if he did not lose teachers within three years, teachers’ salaries would eventually consume 105% of his budget.

There was unanimity that if the current proposals go ahead unchanged, schools will not only lose teachers – who are likely to be experienced with high salaries – but they will have to drop subjects, further narrowing curriculum choices for pupils. This will result in increased class sizes for the remaining subjects.

The four headteachers stated that whilst pupils with special needs – deprivation, low attainment and English as an additional language – will benefit under the proposed new formula, a far larger number of pupils without extenuating circumstances will be unfairly disadvantaged.

Finally, the maximum 3% floor that any school can lose in funding will further enshrine the 59% differential in funding between the highest-funded and lowest-funded local authorities. Currently Hackney receives £7,219 per Key Stage 3 pupil whilst Gloucestershire’s schools will receive only £4,312 under the proposed funding formula. This will further push Gloucestershire down the funding league table from 108th to 116th.

Mr Clifton-Brown further stressed the importance for all teachers, governors and parents to  contribute to the Government’s consultation on the proposed new funding formula by 22 March. Alternatively, he would encourage all of those affected by the proposed formula to forward all submissions to his parliamentary office at cliftonbrowng@parliament.uk.

The Headteachers have subsequently drafted the attached joint letter setting out their concerns about the direct impact the proposed changes will have on their school budgets and urging parents to respond to the consultation before it closes on 22 March 2017.

Commenting after the meeting the MP said: ‘It was hugely important that I was able to meet and have highly constructive discussions with the heads of some of our biggest academies in The Cotswolds to hear first-hand the dire effects that this national funding formula will have on our schools in the Cotswolds if it goes ahead. These discussions were of particularly timely so that I can raise individual examples of the Cotswold’s schools’ unhappiness with the Prime Minister when I meet her later this month.’

Chiquita Henson, said: ‘We appreciated the opportunity to talk frankly about the unfairness of the government’s funding proposals and share our concerns about the real impact these will have on our schools and the learning and life chances of young people in The South Cotswolds. We were reassured by Geoffrey Clifton-Brown’s commitment to fairer funding and hope that the evidence we were able to give him will lead to a more equitable distribution of the funding available for all schools.’