On Monday 4 July 42 geographers from our new Year 11 and the Class of 2016 joined Miss Lillington, Mrs Buckley, Ms Henson and Mr Johnson on an Icelandic adventure. For the 23 new Year 11 pupils it was an opportunity to find out more about some of the geographical processes which we have studied in class and will be exploring more of in future modules. For the pupils from the Class of 2016, who have already sat their exams, it was an opportunity to travel to one of the most amazing countries on the planet and to reflect on their time at Deer Park.

The focus of the trip was on geography and the geomorphology of a unique country famous for its volcanoes, lava fields, glaciers, dramatic coastline and spectacular waterfalls.

The actual adventure began on Monday 4 July with a coach journey from Deer Park to Heathrow and as we boarded our flight with Iceland Air, Mr Johnson reminded us all of the benefits of having such spacious seats! After a patient wait at passport control and collecting our bags we met Ingo, our Icelandic bus driver for the week. Our first stop was one of the must see attractions in Iceland, The Blue Lagoon. In addition to sitting on a divergent plate boundary, Iceland also sits on a hotspot or magma plume, and this feature creates the geothermal hotsprings for which Iceland is famous.

After we had experienced the geothermal waters, steam rooms, saunas, face masks and slushies, we headed to our accommodation for the first evening – The Hotel Cabin in Reykjavik. Travelling in July we had the chance to make full use of the 21 hours of daylight (and sunshine). After dinner we explored the local area, including a beautiful nature reserve, our first volcanic beach and a sculpture park. After a busy first day we closed the blackout blinds and got a good night of sleep in preparation for the busy week ahead. 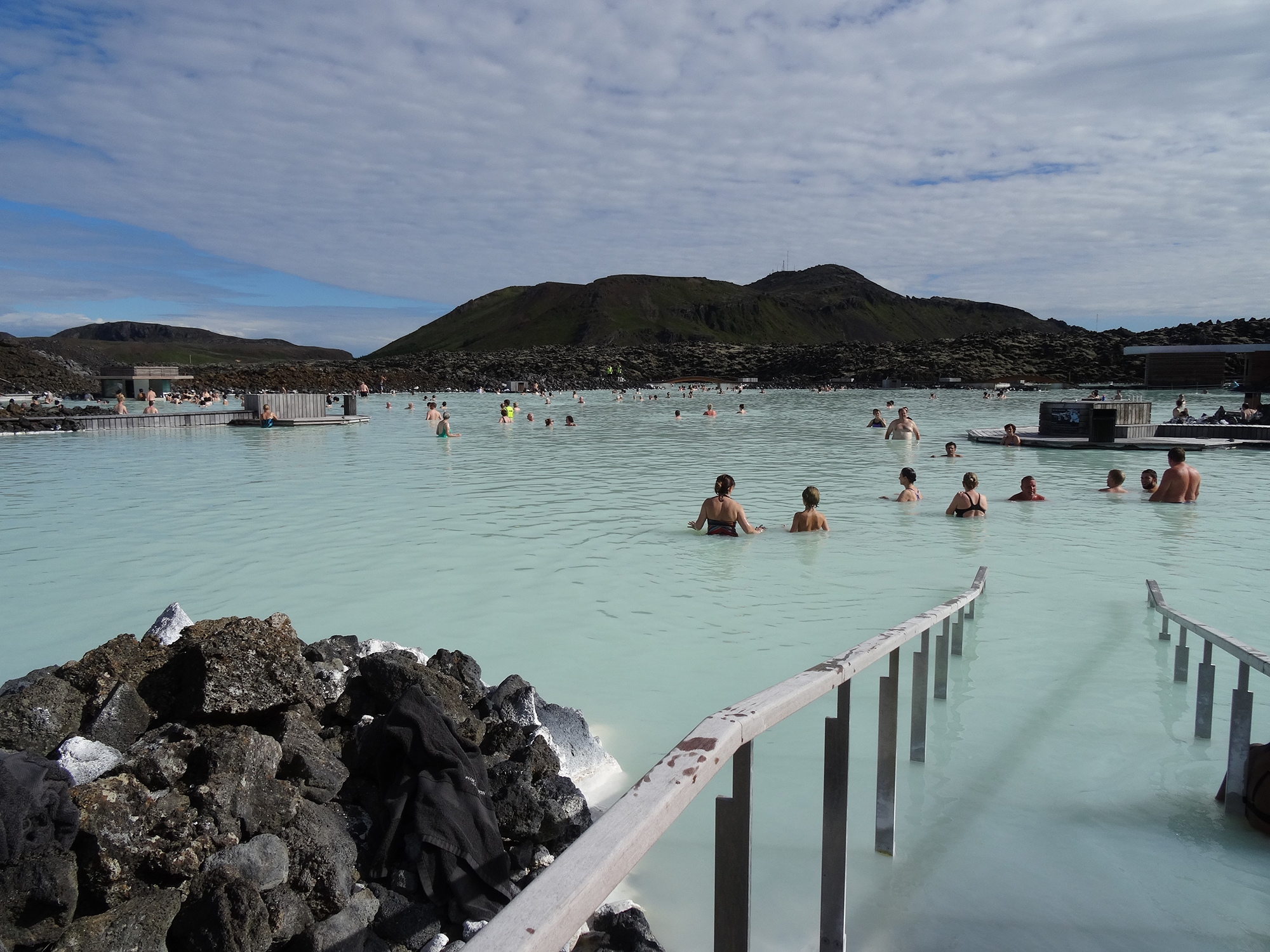 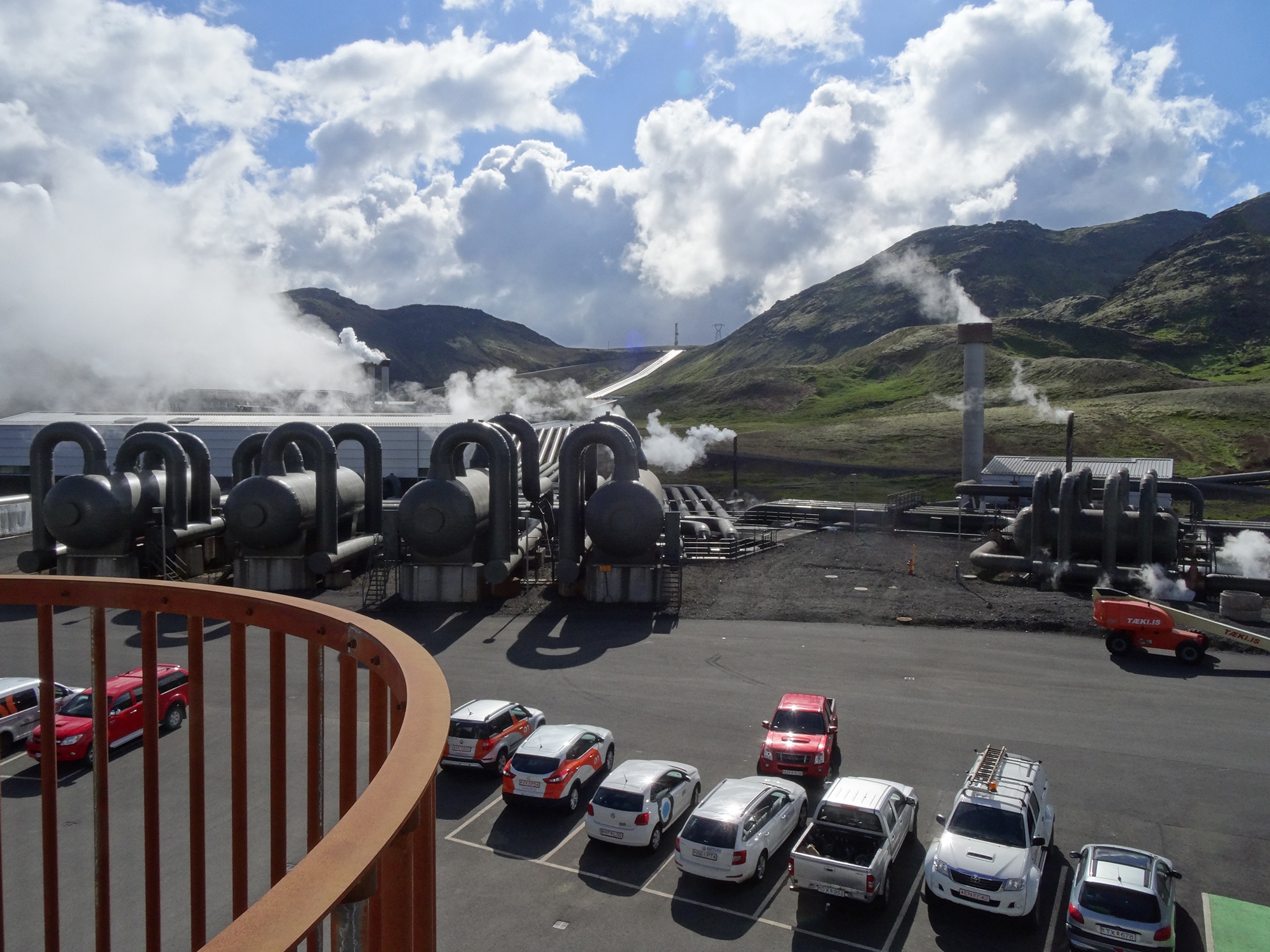 At breakfast on Tuesday morning we met our Icelandic guide for the week, Aga. Aga’s knowledge of Iceland was phenomenal and over the week she shared stories with us about Icelandic culture, food, wildlife, folklore, history and geographical processes. Our first stop of the day as we travelled east was at the Hellisheioi power station, the world’s third largest geothermal power plant sited in a high temperature area just east of Reykjavik. At the power station we had the opportunity to discover how the power of the planet can be harnessed to make Iceland self sufficient in terms of electricity and also a key player in the global fight to reduce Carbon Dioxide emmissions.

We then travelled across the Eyjafjallajokull flood plain, the area affected by the jokulhaup (glacier burst) which was a consequence of the 2010 eruption of the sub glacial eruption. Visiting the Eyjafajokull visitor centre gave us an insight into the impacts of the 2010 eruption on the local community, particularly the local farmers. The centre featured breathtaking images and an interesting film documentary about how the local farming community dealt with the tectonic disaster.

Following the visitor centre we then travelled a few kilometres to our first waterfall stop, the magnificent Skogafoss. Skogafoss is a wide waterfall which falls from a height of 60 metres. Pupils were divided on whether the best views of the waterfall were from the top or from the photo, and lots of photographs were taken to try and capture the waterfall’s magnificence and rainbows. Jack and Sophie were both celebrating their birthday, so we thought that this would be a great place to share the birthday cakes and sing Happy Birthday! 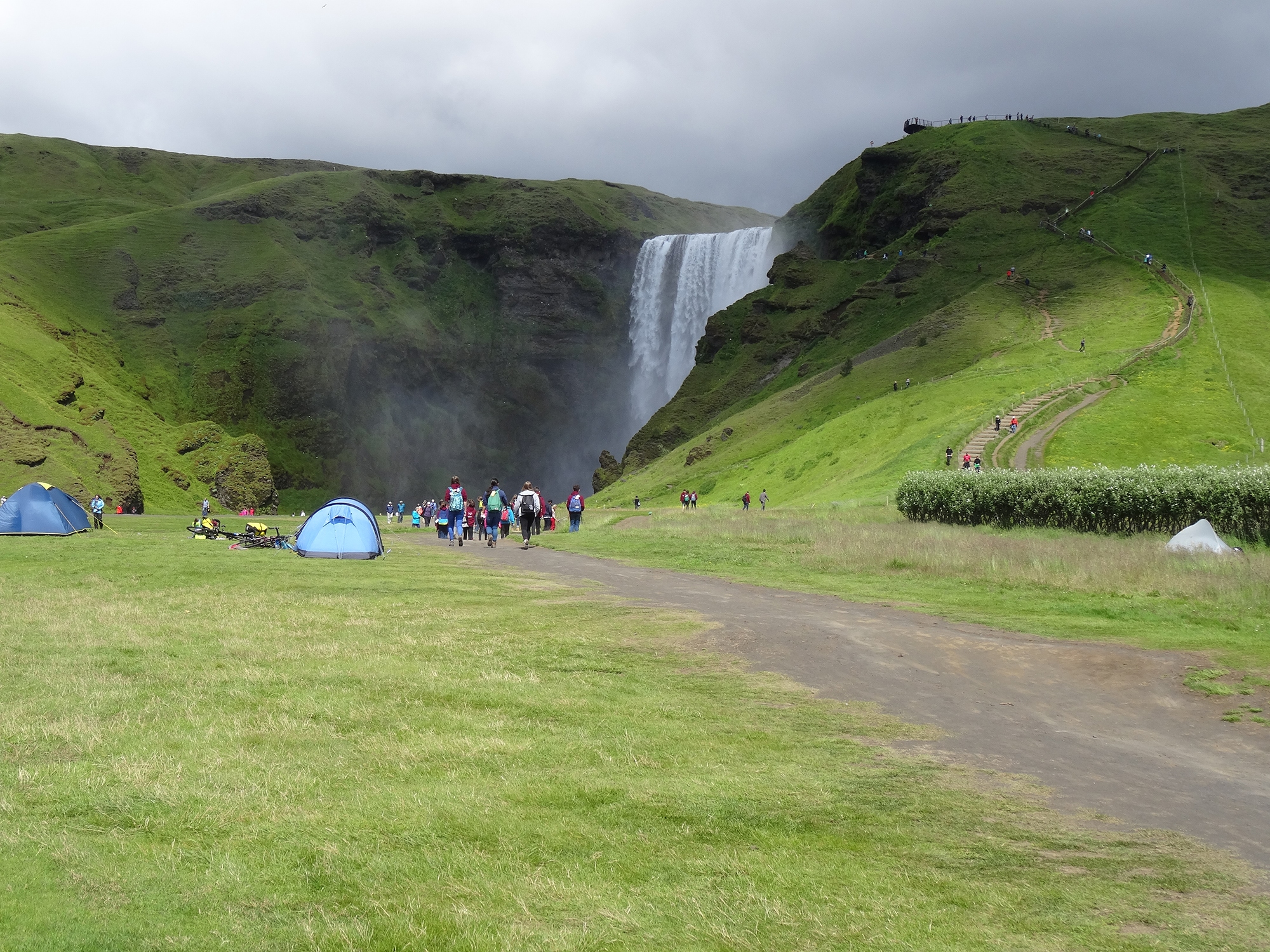 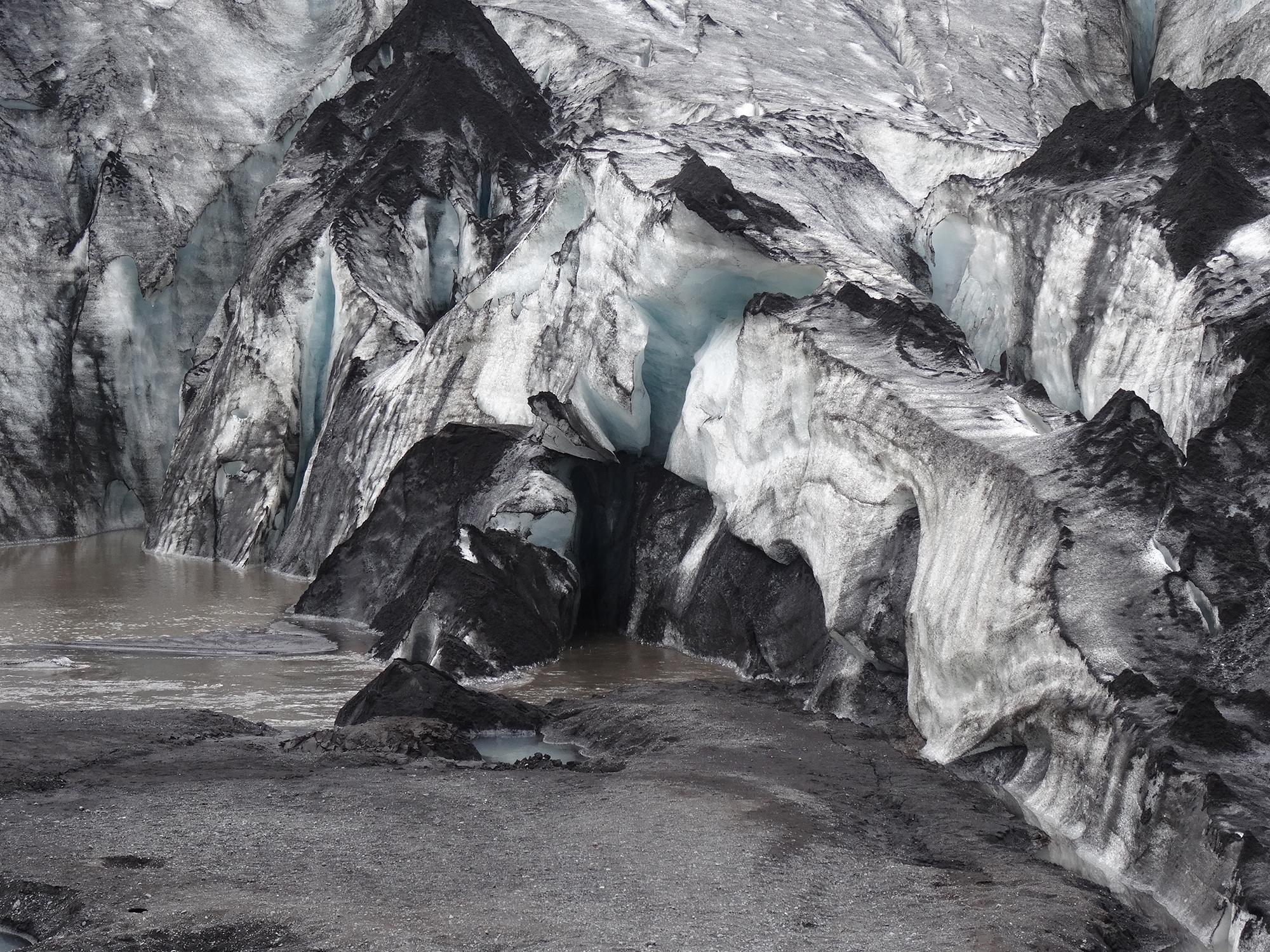 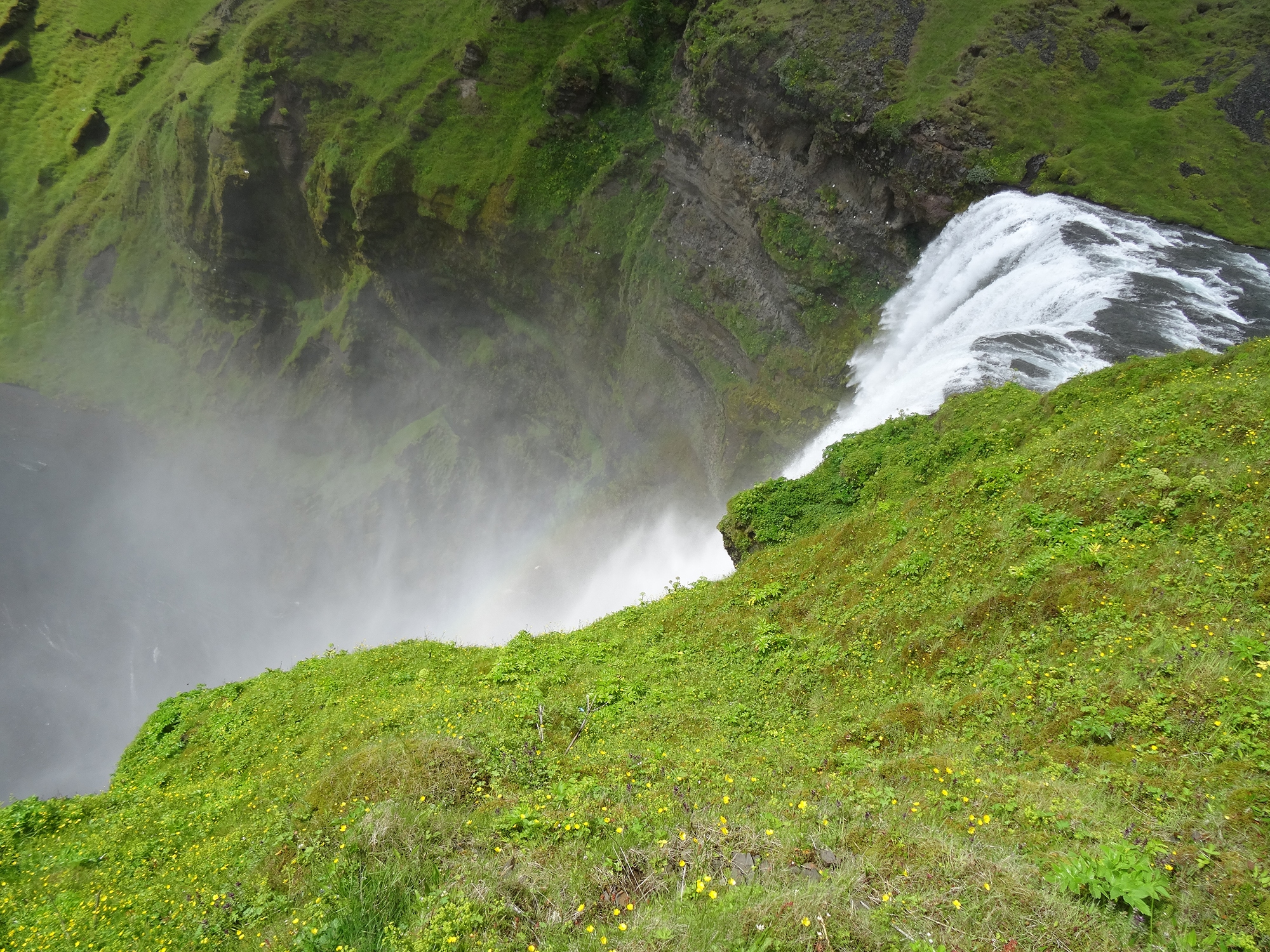 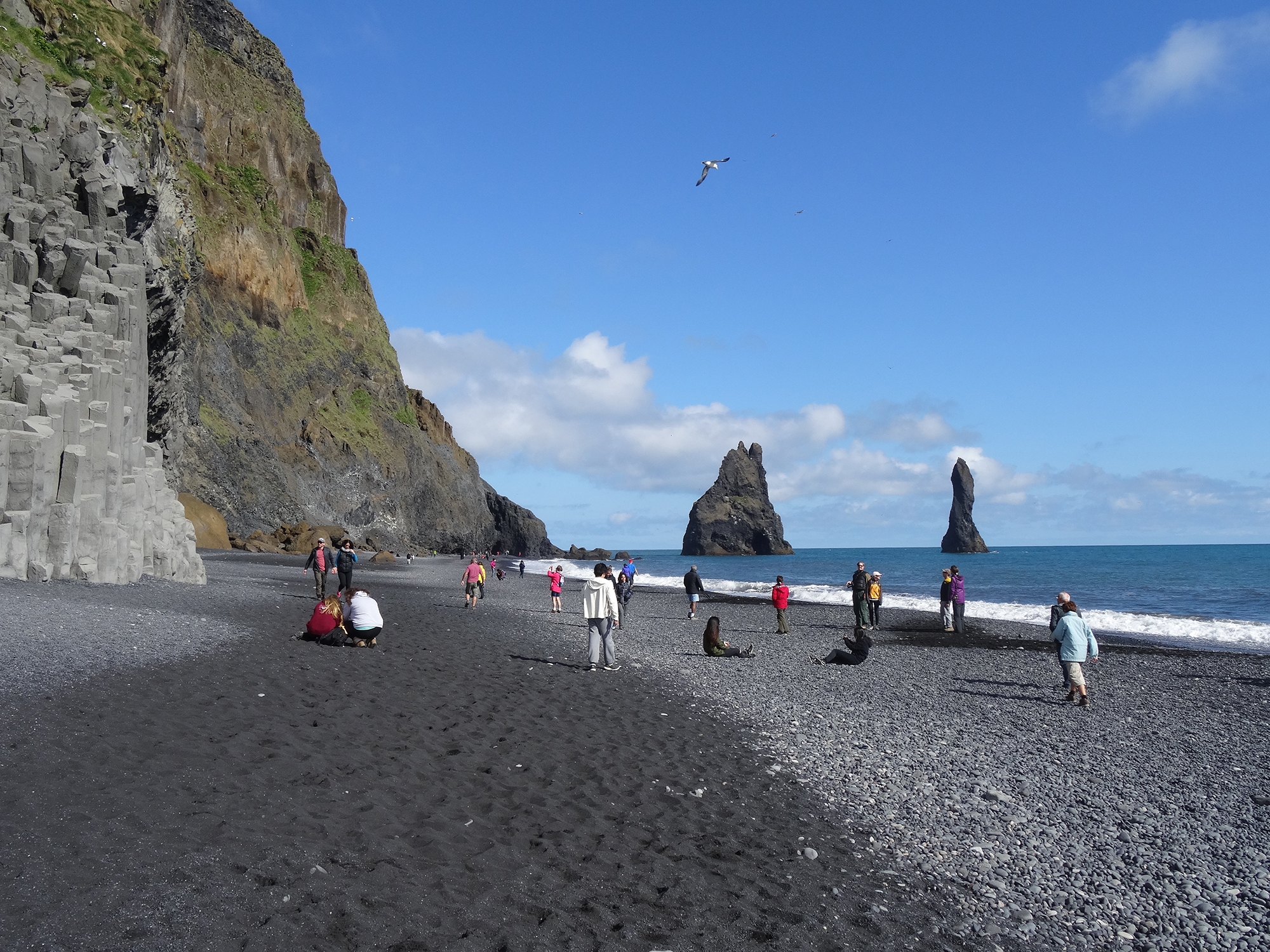 The next geographical feature, was argued by most as being the most spectacular, Solheimajokull or the sun house glacier. The glacier has been retreating since the end of the 19th century at a rate of around 100m per year. A walk down to the snout of the glacier gave us the chance to appreciate its size, the crevasses and the impact of the 2010 eruption in terms of the piles of ash that can still be seen today. The glacier showed both the power of ice in carving out landscapes, whilst at the same time reflecting the fragility of the landscape due to the impacts of climate change.

So, after fire and ice we headed to our last geographical feature of the day, the spectacular Icelandic coastline. The coastline featured many of the coastal landforms recently studied in class including spits, caves, arches, stacks, stumps, destructive waves and even a tombolo! The basalt columns created by the fast cooling lava provided a spectacular back drop to the black beaches and also a perfect habitat for Iceland’s national bird, the puffin.

Our second night was spent at Hotel Hvolsvollur, where we ate a typical Iceland dinner and enjoyed an evening in the sunshine with spectacular views of Eyjafallajokull and the flood plains.

"I enjoyed the glaciers as I had never seen one in real life. Iceland looked as if it was out of a catalogue." Harry

"I really enjoyed the naturally heated Blue Lagoon as I found it both fascinating and beautiful. I also learnt so much about the culture and geography of Iceland." Emma

"Seen so many pretty places and I’m so glad I went on this trip. I don’t think I’m going to see any other places as good as Iceland and for a last school trip it has to the best. I have really enjoyed myself and I don’t think I have ever taken so many photos in a week!" Jess

"Iceland was a beautiful place with many outstanding waterfalls and large snow capped mountains and volcanoes, seeing this in real life and having the pleasure to experience it is just amazing and I’m grateful that I had the chance to come." Owen

"One of the best places I’ve been to, definitely going to return. I thoroughly enjoyed it!" Ellen

"Iceland’s landscape is absolutely breathtaking and I’m so lucky to have had the chance to experience it. It’s also been a great opportunity to meet new people and I would definitely come back to see more of this magnificent country." Sophie

Possibly one of the most awe-inspiring school trips I have ever done. I genuinely ran out of words to describe everything we saw. I have no doubt everyone on the trip has come back with an experience that will last in memory forever.

It was a privilege to travel to Iceland with our Geographers. The country and its dramatic landscape, experienced in full sunshine, definitely didn’t disappoint and it was a joy to share in the collective sense of awe and wonder. Truly memorable. Thank you.