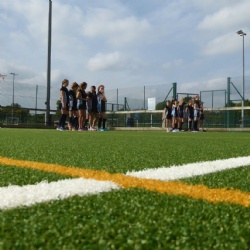 When thinking of school sport, there are definite associations with the different seasons: Rugby and Netball in the Autumn/Winter term, Football and Hockey in the Winter/Spring and Athletics, Cricket and Rounders in the Summer. Obviously at Deer Park our pupils have the options to participate in many other sports during the school year, whether it be basketball, trampolining, table tennis, gymnastics, fitness training, tennis, handball, badminton, gymnastics and volleyball. Key Stage 4 pupils who have chosen GCSE Sport can also use sports on the syllabus like skiing, dance and swimming and will have an opportunity to visit Bath University for a revision trip.

Girls Rubgy has been prominent during the Autumn term with coach Bianca Blackburn from Gloucester Rugby coming in to coach our Year 7 and Year 8 pupils on Tuesday lunchtimes. The girls are keen to participate in a Rugby Festival in March.

Each year we hold Key Stage 3 Inter Tutor Group Tournaments with points tallied over the year and tutor groups competing to be the top sporting team of the year, which is announced in July. Rugby and Netball take place in October, Hockey in January, Football in March, Rounders in June, and in July, Tennis and Athletics (Sports Day). You can read the results of 2016-2017 in Summer Sports below. The first competitions of this academic year took place in October, with tutor groups are gaining valuable initial points towards sporting tutor group of the year.

You may already have heard about our new artificial playing surfaces, installed over the Summer and early Autumn. Mrs Hacker, Head of PE, said "The new surfaces are far superior to the ones we had before and are excellent to play on. We are so lucky to have this great facility." You can read more below.

Our Year 10 Games Captains and Year 9 Young Sports Leaders are an integral part of our primary sports offering, helping our PE Faculty organise and run sports events for our local family of primary schools. In return, they have the opportunity to coach, inspire and lead many of the events. Many of our Young Sports Leaders and Games Captains go on to study GCSE PE and beyond.

This Autumn term we congratulate the following pupils:

X-Country: Beth, Katie and Zaak (Year 7), Tanwin (Year 9), Luca, Ameer and Luke (Year 10)  ran successfully in November and were selected for the District team. Well done Luke, Luca, Tanwen, Katie and Beth who competed at the County Schools’ Cross Country Championships in Newent at the start of December; and our congratulations to Luke who is through to the South West Championships in February.

Netball: Ailsa and Lily (both Year 8) selected for satellite/district teams.