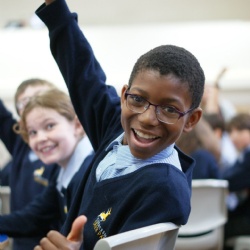 Each September it is a delight to welcome new pupils to Deer Park, especially those in Year 7, all bright-eyed and bushy-tailed, eager to learn and smart in their new uniforms!

This September we welcomed over 170 children from over 45 primary schools, many of them being the only children to join us from their primary school.

Our two Induction Days held in July saw them all making friends, meeting teachers and staff, learning to find their way around the site and generally beginning to get used to life at Deer Park. Amongst other subjects, they joined in with lessons in Science, PE and Drama.

These two first half terms have seen so many achievements and personal triumphs, children overcoming initial nerves and rising to some of the challenges. They have thrown themselves in and had a go, adapting to new timetables, meeting new people and taking on new subjects.

The whole school cheered when the boys Year 7 Basketball team became the District Champions, a massive achievement and we are hugely proud of them. The boys have worked hard, under the guidance and tutelage of Mr Schlaefli, and their skill and determination has certainly paid off.

The Carol Service held in Cirencester Parish Church on Tuesday 12 December saw 40 of our Year 7s attending during the evening, despite the weather! Personal triumphs include Sean playing piano for the Key Stage 3 Choir and, as Music Teacher Miss Faux said, "we couldn’t have managed this without him", he was brilliant, as was Beth and her solo Flute performance. Great achievements showing skill and resilience.

A decision was taken earlier this year when discussing our next whole school musical Legally Blonde Jr that the performances would not be on stage until February 2018, rather then the more usual November, three months after our new pupils join us. Having the extra time to rehearse, and the opportunity to perform at our Legally Blonde Jr Taster Evening, has really benefitted the Year 7s involved, including lead dancer Joe. We hope you will be able to come along to see the show 21-23 February.

In May many pupils will be travelling to Belgium on our annual Private Peaceful Trip, following in the footsteps of characters in Michael Morpurgo's moving book. During Enrichment Week at the beginning of July, the whole of Year 7 take part in 'Aim for the Stars' activities, which have been chosen to help develop team building and communication skills and to give individuals a challenge.

Senior Year Leader Year 7, Mrs Hannis says "It has been a pleasure getting to know this year group, joining them at the beginning of their journey. I look forward to the year ahead and seeing what 2018 holds for us all."

In September we hold two Learning Conferences for Year 7, one for pupils during the school day, followed by a separate event for parents. The latter is a great opportunity for parents to meet other new parents and to find out what and how their children will be learning during their first year at secondary school.

Parents can expect to receive three reports each year which are sent home with pupils over the course of each year’s study. In Year 7 the first two reports will show grades achieved by pupils and the final report will also include written comments, which will be 'next steps' indicating what the pupil needs to do to continue to progress in each subject. In addition to the regular reports, in December of Year 7 we hold a Parents'/Tutor Meeting and later in the academic year there will be a Parents’/Subject Teachers Evening, the latter providing an opportunity for parents to meet their child’s teachers and discuss any aspects of their progress.

We encourage parents to sign up to our weekly email newletters, which keep parents informed of letters, current and upcoming events and opportunities. We also recommend reading our regular Latest News stories here on the website and posts on Twitter: @CDPStoday, @CDPSsport, @CDPSdogs.