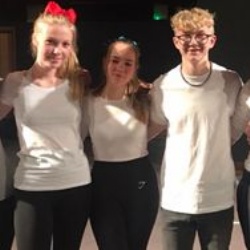 Another week another practical Drama exam! Year 11 GCSE Drama pupils did not disappoint with their scripted performances on Thursday 10 December 2020.  Every performance group had the audience gripped and fully committed to each performance, whether that was through the creation of a heated argument, hilarious impersonations or haunting monologues. As part of the GCSE Drama course, pupils must plan and rehearse extracts from a published play which they are assessed on whilst performing to a live audience.

Due to restrictions with social distancing, this event could not allow an external audience to watch the performances in our drama studio, so, like the Year 10 Drama exam evening a fortnight earlier, we live streamed the performances, so friends and family could watch at home.

‘We were thrilled to have so many audience members watching remotely, the pupils were really grateful that this could happen. A lot of people watching at home would not have been able to attend the event in person if that was possible, we were live streaming as far as Portugal!’ Mrs Gleed, Head of Expressive Arts

Pupils performed extracts ranging from 10 to 20 minutes from three different plays. ‘Two’ by Jim Cartwright, a play about a married couple, pub landlord and landlady, with a tragic story, ‘Teechers’ by John Godber, a comical story of 3 school students putting on a play about their school teachers and ‘Find Me’ by Olwen Wymark, a story portraying different perspectives of a family living with a child with severe learning difficulties. Some of these scenes required a lot of skill to portray the emotions that these characters were feeling, as well as the change in characterisation needed. Many performers were multi-roling, and so, for example, in one scene they were playing an excitable child, and then an exhausted mother in the following scene.

Year 11 Year Leader, Mrs Stubbs attended the exam to support the pupils and was really impressed with what she saw from all pupils: 'I had the privilege to be one of 5 staff who made up the physical audience for our Year 11 GCSE Drama performances on Thursday 10 December. The air was filled with excitement, tension and apprehension when I arrived – pupils were busy preparing props, sorting costumes and rehearsing lines. For the next 3½ hours my mind was blown away – tears of laughter and emotion were shed by myself and supporting pupils whilst we watched the most fully charged performances from each and every child. Their team work, techie support and transition into role was outstanding and professional. Live streaming allowed immediate feedback and was very much appreciated by the pupils. As I drove home I felt like I had spent the night out at the theatre and felt so very proud of them all.'

Clara who performed extracts from ‘Find Me’ said ‘It was a really amazing evening. It was very emotional! I thought everyone performed so well. The atmosphere was buzzing! I want to say a big thank you to all the teachers that took the time to stay and support us throughout the evening.’