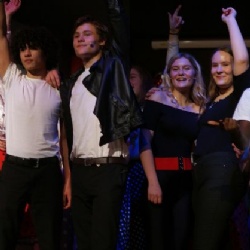 Grease is the word...

During the week ending Saturday 29 February 2020, Grease the musical was on stage at Cirencester Deer Park School, and what a week of performances! Each ones was a showcase for the incredible talent, energy and commitment of our pupils. The Expressive Arts team has been overwhelmed by the amount of positive feedback received, all stating that this has been the best production Deer Park has ever put on.

Don’t just believe us though, here is a selection of messages we have received from parents, other teachers and members of the audience:

"Please pass on our thanks and our congratulations to the staff and students involved in the Grease production. 120 pupils from Year 5/6 at Cirencester Primary School attended the dress rehearsal and we were absolutely blown away by the quality of the singing, the live music, the acting, the direction, the costumes and the scenery. And to double-cast! Twice the work for you but an excellent opportunity for talented children to shine.
This is by far the best production Deer Park have done yet and I hope you feel very proud of the children and staff involved - what an achievement!" Year 6 Teacher

"I am a retired teacher who previously participated in these productions and fully know, and appreciate, the considerable hard work, for months, that goes on to make a successful production: involving direction, acting, singing, dance, music, technology, costume, make up, props. Many students will be studying for external exams at this time too and are to be congratulated. I always used to say to our cast - if you make me cry you know it's successful. You made me cry Cirencester Deer Park! Absolutely wonderful each and every one of you!"  Retired teacher

"WOW! I mean, WOW! If you need a showcase for all that is outstanding about the school, the pupils and the teachers, then THIS IS IT. 3 well deserved standing ovations!" Year 7 and Year 8 Parent

"Wow! Wow! Wow! What a show, we all had such a lovely evening my 10 year old son and his friend loved every minute and can’t wait to come to Deer Park in 2021. Well done to each and every one of you, you are all awesome."
Parent of Year 5, Year 8 and Year 10

"Wow, what a talented bunch of young people who did you proud.  I can now see how putting something as polished as this together was 10 months of graft.  You led an exceptional team of staff in putting the show together and you must be really very proud of what you’ve achieved.  You don’t have to do shows as big as this, you don’t have to give every Year 7 a place on stage, you don’t have to cajole 100 youngsters and then put on a show like this.  The fact that you do, the fact that you have that ambition is symptomatic of why we chose Deer Park when there are 5 secondary schools closer to us."  Year 7 Parent

"Please pass on our praise and admiration to your amazing young actors who performed the Grease production. My friend and I took our daughters to let them see what the school could offer in the Drama department, should they get into the school. I am really pleased to say that my daughter now has a place in September and cannot wait to start! The children were totally amazing and it was a great example to set showing that amongst all the homework and hard work, these individuals still make time to learn all of those lines, songs, dances etc and still have fantastic fun by the looks of things along the way.  They were absolutely amazing." Year 6 Parent

Putting on Grease has been the culmination of a long journey that started with the first plans to stage the musical in February 2019, through to the final performance on Saturday 29 February 2020.

This is what Headteacher Ms Henson said about the decision to put on Grease:

It was about this time last year that Mrs Gleed came to see me about doing ‘Grease, The Musical’. She was very persuasive and she needed to be! For sixteen years as a headteacher, I resisted the show, but given her and the team’s determination to make it work and our commitment to addressing the issues it raises through our wider curriculum, I finally caved in and agreed and I am incredibly pleased I did.

Once the decision was made to stage Grease, the Expressive Arts team needed to tell the pupils and get them excited about the production. The announcement of our next musical is always highly anticipated in the school, so the team decided to spend a week publishing some cryptic clues as the what the musical may be, some of which were deliberately supposed to put pupils off the scent too! This created a real buzz around the school as pupils tried to decipher what the clues all meant. We regularly had pupils knocking on our office door with their guess. Read more...

Once we announced we were putting on Grease the next step was for pupils to audition. It was then that we knew Grease was going to be a big production as we had a huge number of pupils attend both the initial workshops and the auditions. This is when the idea of double casting all of the lead parts was first discussed. We had so many fantastic performers who could act brilliantly, sing beautifully and dance with energy and precision. It became impossible to cast just once! This left us with another problem as we usually only do three evening performances; an extra Saturday performance was added to the diary and we had two casts who would each do two performances.

Then it was time for the announcement of all our casting decisions; at this point pupils weren’t aware that we were double casting as we had never done this before. After the initial shock, pupils were receptive to the idea that they would have a performance double to work with throughout the whole rehearsal process.

Talking of the rehearsal process… the whole cast has worked absolutely tirelessly to make the show as fantastic as it was. At times the rehearsal schedule was gruelling, but it was a great deal of fun too. The pupils and staff worked solidly for about 8 months, week in week out, to perfect the music, the singing, the dancing, the acting, the technical aspects of the show, all of which had to come together in time for the show to happen.

In November 2019 an array of pupils in brightly coloured costumes and greased back hair took to the stage, giving the audience at our Grease Taster Evening a first glimpse of our whole school production of this iconic musical. Read more...

In February 2020, after half term rehearsals and a full dress rehearsals to local primary schools, our production was on stage from Wednesday 26 to Saturday 29 February. Both the 'Rockers' and 'Rollers' casts performed for two nights and our 'Grease Megamix' on the final night was performed by the combined casts - everyone on stage - and received long standing ovations!

Joanna aka Rizzo and Max aka Doody (Year 11): "We have loved the experience of taking part in Grease. It has been a good way to get away from some of the stresses of being in Year 11 at school, and we have looked forward to every rehearsal. We have gotten a lot closer to people that we wouldn’t usually talk to and made lots of new friends. We wouldn’t have been able to enjoy it or create such an amazing production without the teachers. We will really miss Grease now that it is done. It has been an experience that we will never forget."

"What a 6 months it has been! When we decided that Grease would be our next show, we knew it would be popular, but never imagined the enormity of what it has become. Despite double casting the show, the pupils have all worked really hard as one big team. It is fantastic to see everyone from all year groups, working together and having fun! Putting on a show is hard work but it is worth it, which we are sure the pupils can see. We would like to thank everybody in supporting the pupils. It has been an absolute pleasure to work with the cast. It’s great to see so many pupils in Expressive Arts during lunch and after school. We are not sure the pupils will know what to do with their time once the show is over!" The Expressive Arts Team

Louis aka Danny (Year 11): "I was initially torn whether to audition for the band or to be part of the cast for Grease as I loved playing the drums for Legally Blonde two years ago. However, my friends, teachers and sister all persuaded me to audition for a lead role and I am so glad they did as I have loved being part of the cast. I want to thank Joe, Tui and Rory for helping me learn lines and also my mum for all the lifts." 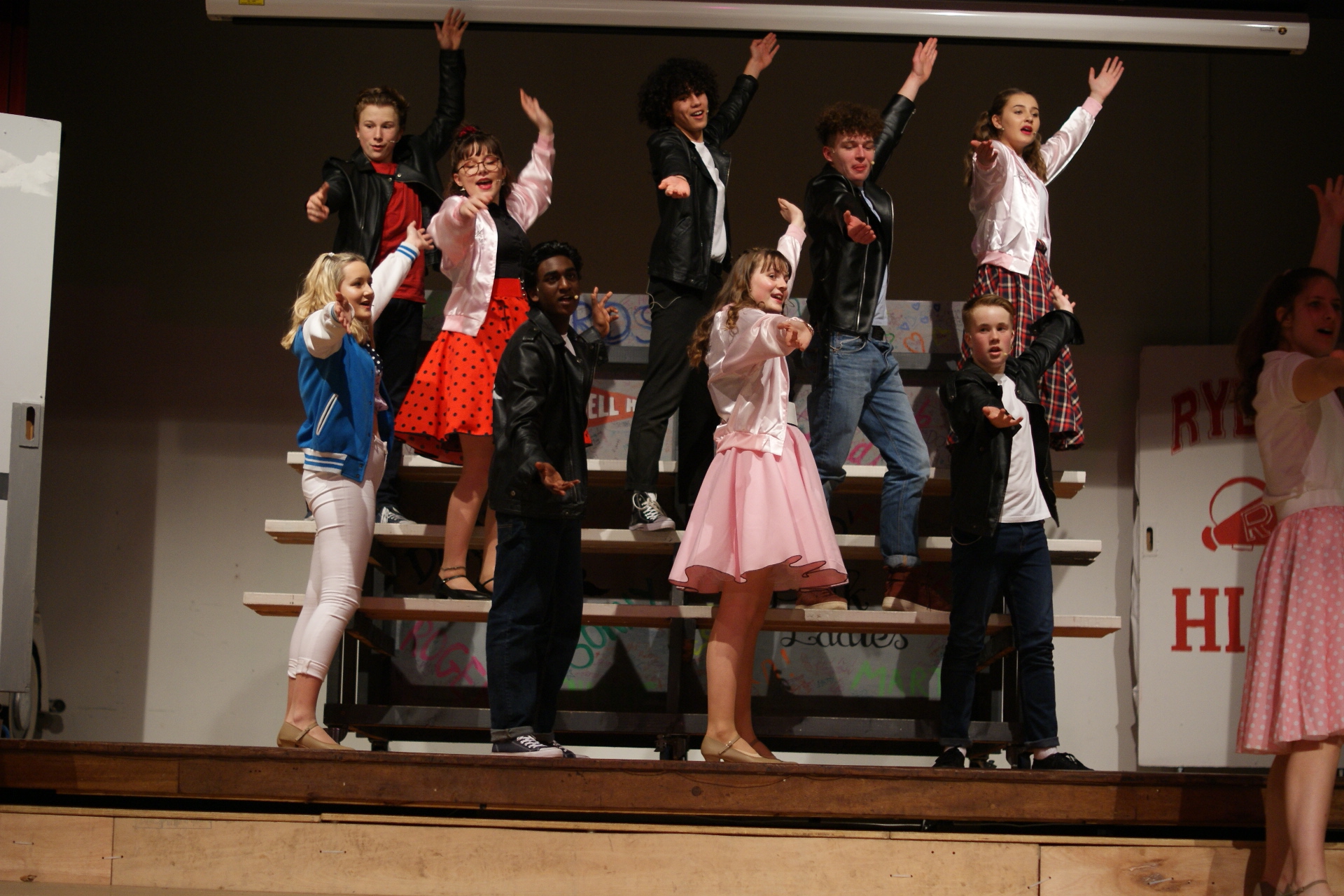 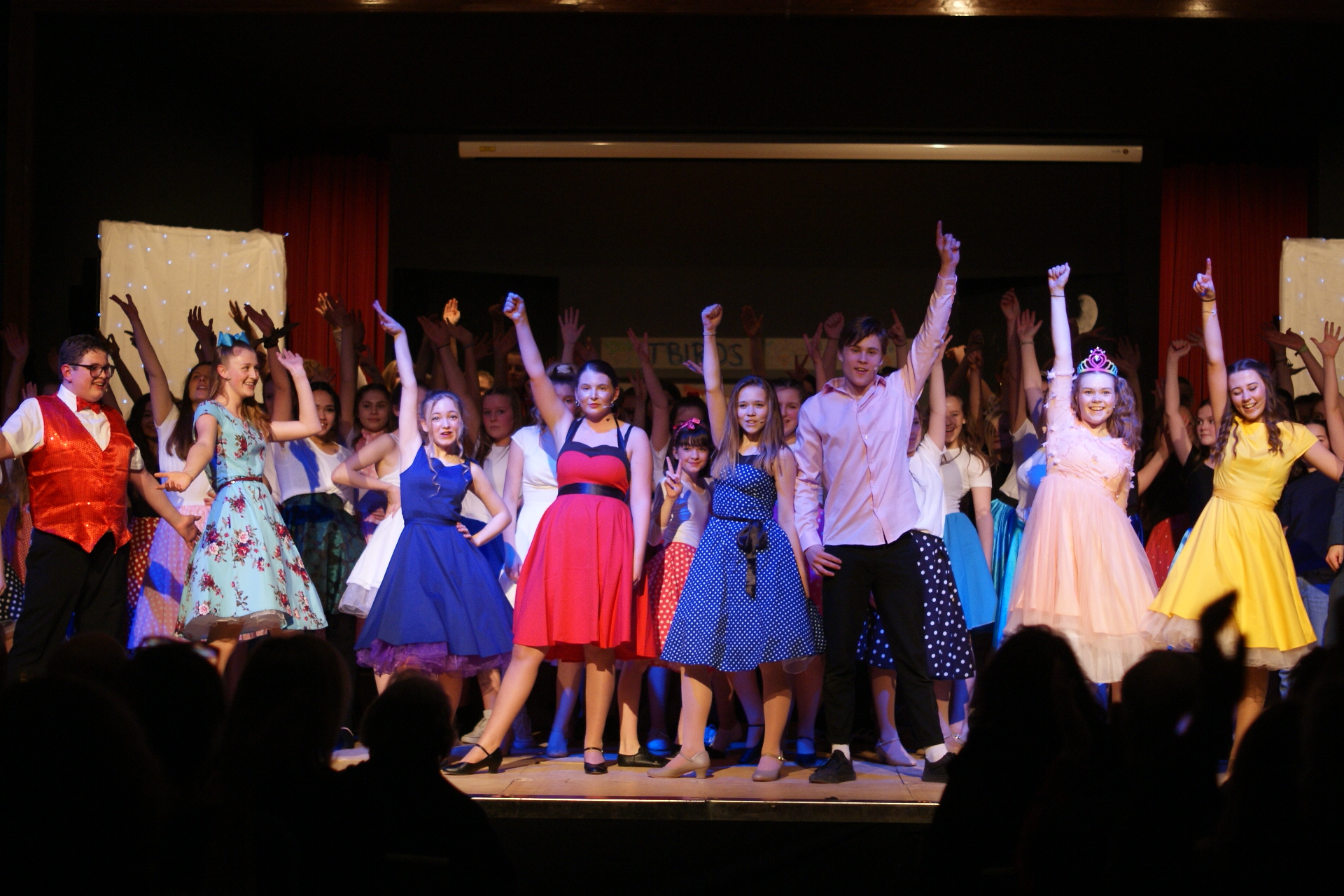 Isla (Year 7): "I really enjoyed Grease. The casts and all the staff have put in so much effort in to the performance." Look out for a Gallery which will be publised next week.

On behalf of all of the team in Expressive Arts we would like to thank everyone for their hard work and dedication. Firstly, all members of the whole cast who gave up a significant amount of their time and brought their positive energy to rehearsals. The band who are all fantastically talented musicians and learnt all of the songs and transition music and performed night after night without missing a beat. The pupils who helped Mrs Gleed with choreographing some dance routines. The pupil technicians led by Mr Milsom, who took responsibility to make sure all of the sound equipment did what it needed to do. Pupils who brought in or made props, helped us with the set design, their parents who helped source costumes and in one case collected and returned the stage car for us. Pupils who took photographs during rehearsals and performances. All of the teachers in the school who gave up their time to help with supervision of the cast and front of house duties. The Maintenance team of the school who built the band platform and stage, Mr Gleed who was roped in to making the bleachers and the bed. The Friends of Deer Park for organising refreshments. Lastly anyone else who helped us out that I have forgotten to mention.

The Friends of Deer Park would like to say a huge thank you to everyone who bought refreshments during the Grease performances and of course a special thank you to all the volunteers who helped sell drinks, refreshments and ice creams. "We raised just over £1,500 in total which is fantastic! This money will be used to fund projects and initiatives that will enrich pupils' learning at school. Well done to all the pupils and staff who were involved with Grease - what an incredible show!"