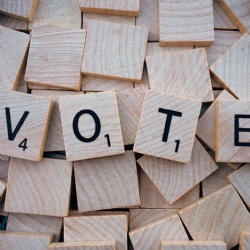 On Thursday 12 December 2019 voters in the UK will be returning to the polling stations in a General Election.

In the run up to this date, pupils at Cirencester Deer Park School will be looking at the General Election process in their Global Citizenship and PSHE lessons. One of the questions recently raised in parliament is whether the voting age should be lowered to allow 16 and 17 year olds to vote? As of May 2019, all the main parties, with the exception of the Conservatives, back reducing the age to 16. What do you and any young people you know think? It is important that we work with our young people before they are old enough to vote, to increase their awareness of the process and the issues, so that when they are eligible they can register to vote and feel able to participate in future elections.

According to a YouGov survey after the 2017 General Election, less than 60% of 18-24 year olds voted in the last general election. Social media campaigns in 2019 have led to large increases in the numbers of young people registering to vote. Did you know that students can register at two addresses - e.g. both their home and term time address - but can obviously only vote at one of them.

At school we have been looking at:

To encourage interest in the election process, you could look at and discuss the following sources of information:

Some voters may vote tactically in this general election, i.e. they won't vote for their preferred candidate/party but will vote for one with a better chance of winning locally, in order to help get an preferred overall election result.

We encourage all of our pupils to be active citizens, to get involved in their local communities and democracy at all levels, from towns to cities to nationwide activity. In the past, pupils from Deer Park have represented their local area at the UK Youth Parliament and we have a number of pupils who are actively taking action about the climate emergency. Other pupils are working together to raise money for a local homelessness charity - The Big Yellow Bus Project - and as a school we will be collecting food donations for Cirencester Foodbank at our Christmas Jumper Day on Thursday 19 December.