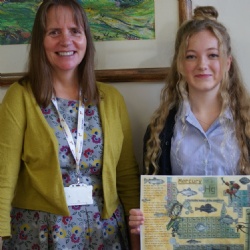 Did you know that 2019 is the International Year of the Periodic Table?

150 years ago Russian chemist and inventor Dmitri Mendeleev developed the Periodic Table, one of the most significant scientific achievements to date. To celebrate this, UNESCO named 2019 the International Year of the Periodic Table (IYPT).

During the Summer Term, our Year 10 GCSE Chemistry pupils were challenged by their teachers to enter the Future Forum competition to create a poster on a single element, describing why their chosen element is the most important in the world we live in today.

We were delighted to discover that Hazel, now in Year 11, was one of 5 students shortlisted nationwide for her entry! Her Science teacher, Dr Simpson, said: "Hazel's poster featured numerous and incredibly interesting facts about the element Mercury. For example, that it is a liquid at room temperature and that it has been used in dental fillings, batteries and light bulbs. It was also interesting to read about how the term ‘mad as a hatter’ originated from mercury use during Victorian times and that the Egyptians used the metal in beauty products.  Hazel’s poster was not only informative but a delight to look at, a true example of Science meeting Art."

Hazel: "I decided to choose Mercury because it is a unique element in its properties but also dangerous within food chains. I thought it was an element that I could work with creatively to produce an interesting poster with different features such as ‘mercury globules’, the Mad Hatter, Victorian mercury medicine books and the Roman God, Mercury.  I believed it was also an element that not many people know about so I wanted to shed some light on it."

‘I was delighted to congratulate Hazel on her achievement. She clearly rose to the challenge in the competition. I was impressed by the depth of her research and the creative way in which she chose to share her knowledge and understanding.

What do YOU consider the most important element?

Find out more about the International Year of the Periodic Table...