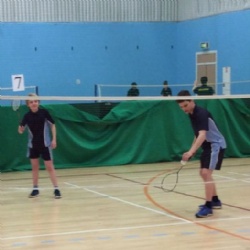 On Tuesday 5 February 2019, Cirencester Deer Park School competed in the annual School Games County Badminton Finals in Cheltenham. This year we successfully qualified in first position from the Cotswold District for the U14 Boys, U14 Girls and U16 Girls.

Each team faced 4 other schools from the 4 other Districts in Gloucestershire - Stroud, Forest of Dean, Cheltenham and Gloucester. The teams played singles and doubles games to 21 points. The following order of games occurred:

“It was good because the games are quick and intense. It was a lovely atmosphere." Gaby, U16 Girls

It was competitive playing the opposing teams. I have thoroughly enjoyed playing with the team." Ben, U14 Boys