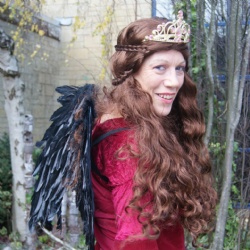 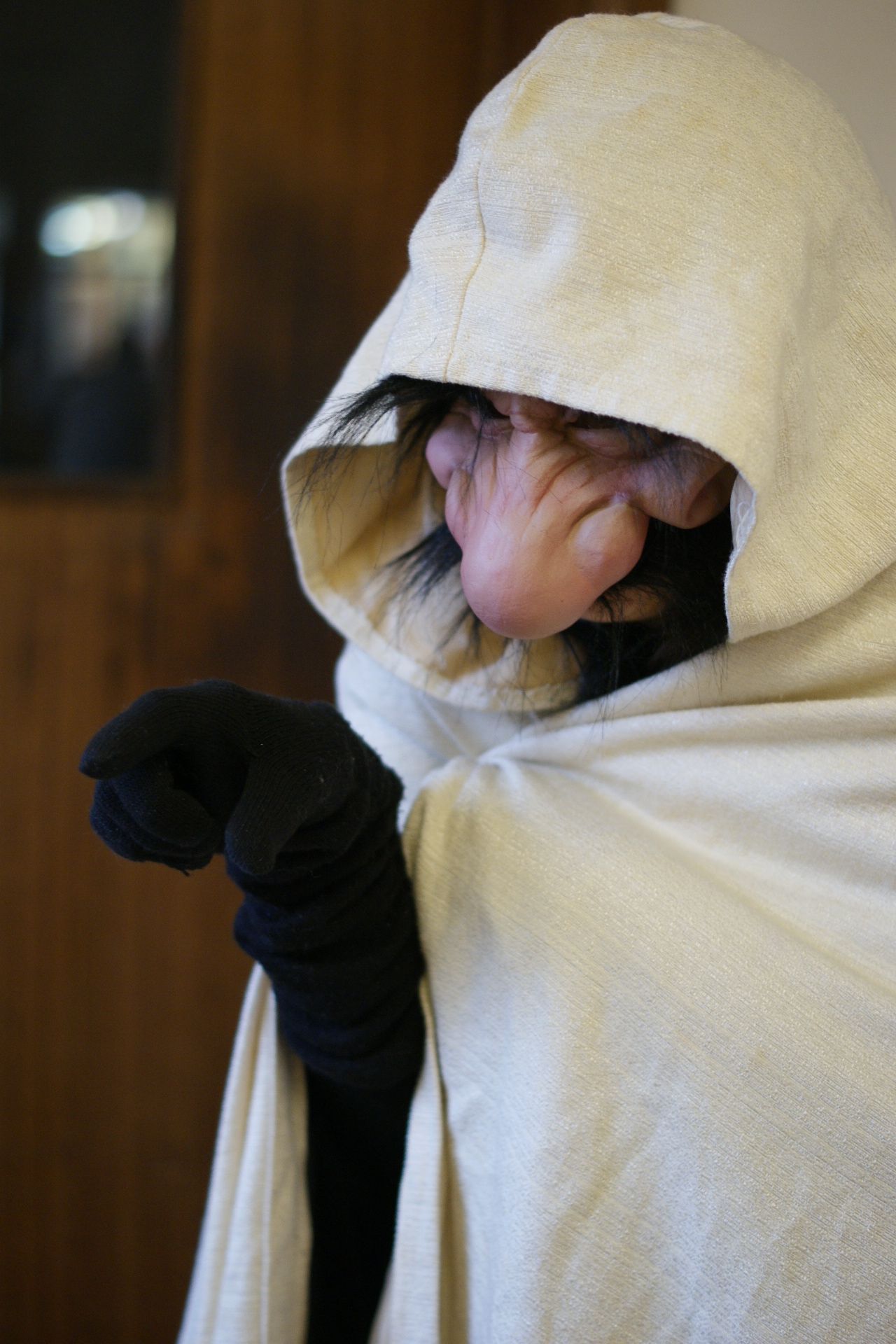 It was not all frights and scares however as we also gave the pupils plenty of opportunity to win prizes for their work. First was our Key Stage 3 Animals in Literature Quiz, which saw a great many entries, the winner being Mima C (8DE). Questions included:

All of Key Stage 3 took part in an Apocalypse mini-saga writing competition, which saw pupils taking part in a lesson designed to teach them to pack numerous linguistic techniques into just 100 words. There were some remarkable efforts and the judging was tough; our winners were Caitlin W (7JE), Tamsin H (8DE) and Thomas D (9FR).

The final competition was our Year 7 Inter Tutor Group Reading competition. As a tutor group, pupils have been logging their reading on our Accelerated Reader programme to see which groups have read the most in a 2 week period. All tutor groups are eager to win, with the current leaders having read over 200,000 words in the last fortnight alone! We look forward to sharing the results when they are in.

Key Stage 3 are not the only ones to benefit from the focus on English as our Year 11s have sat three GCSE English mock papers in the last three weeks. To complement their study of poetry, we will be taking a group of Year 11s to a poetry conference in January and the whole year group will have the opportunity to see a production of Dr Jekyll and Mr Hyde in February.

On Wednesday 28 November we took a group of our Year 11s to see The National Theatre’s production of Macbeth in Bath Starting in the New Year, Macbeth will be the final text that our Year 11s will study before their GCSEs and as such this has given them a valuable insight into the play and its many interpretations. Read about the Macbeth Trip...

Continuing with the dramatic arts, Christmas can truely begin now that the famous Dickensian tale of Scrooge and his ghostly visitors has been told. We would like to give a big thanks to Ginificent for gracing us with their production of A Christmas Carol on Friday 7 December. Our Year 8s were enthralled. This year was particularly special as we were able to host two of our partner Primary Schools within the Corinium Education Trust, Kemble and Siddington, an invitation that we hope to extend for the foreseeable future. 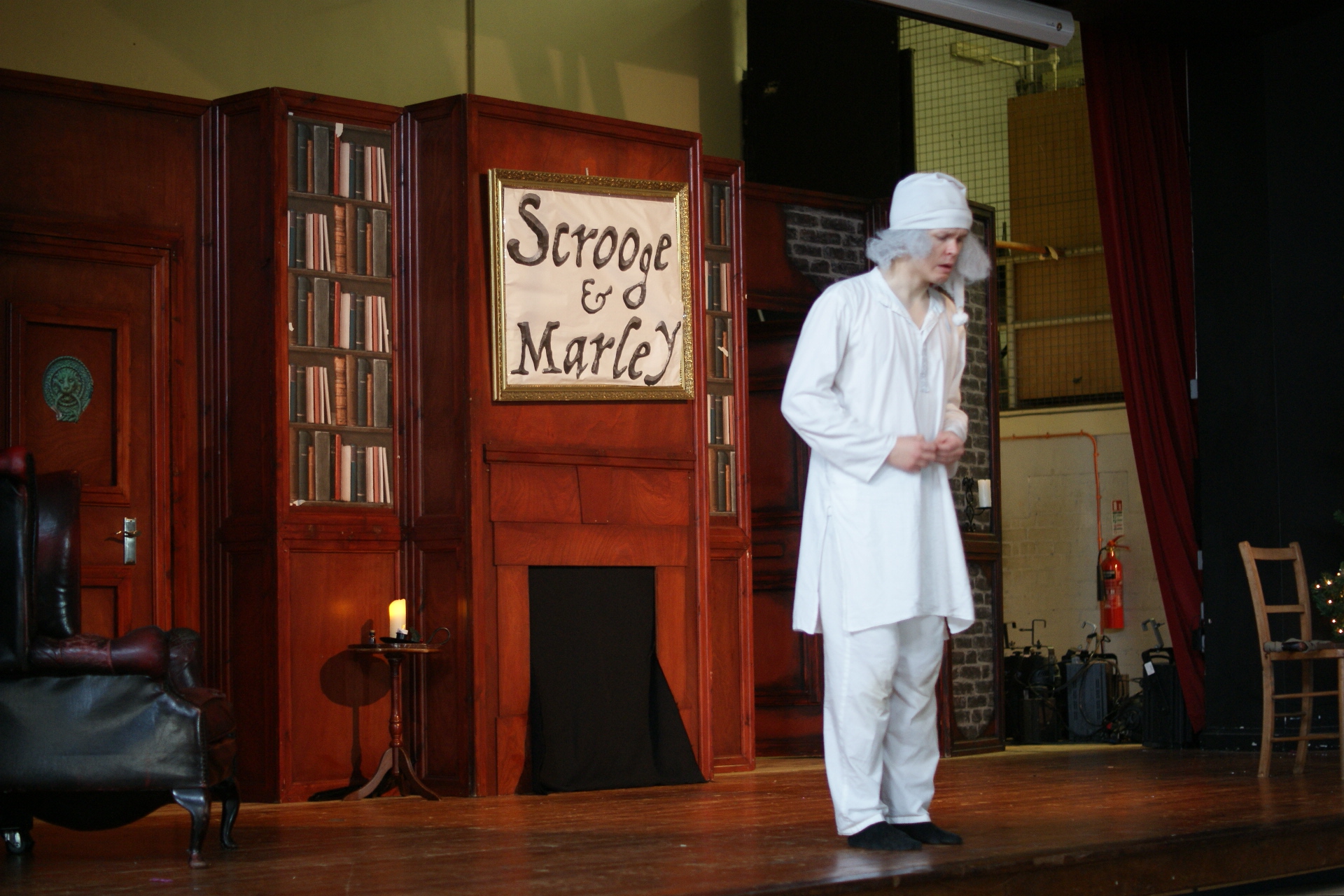 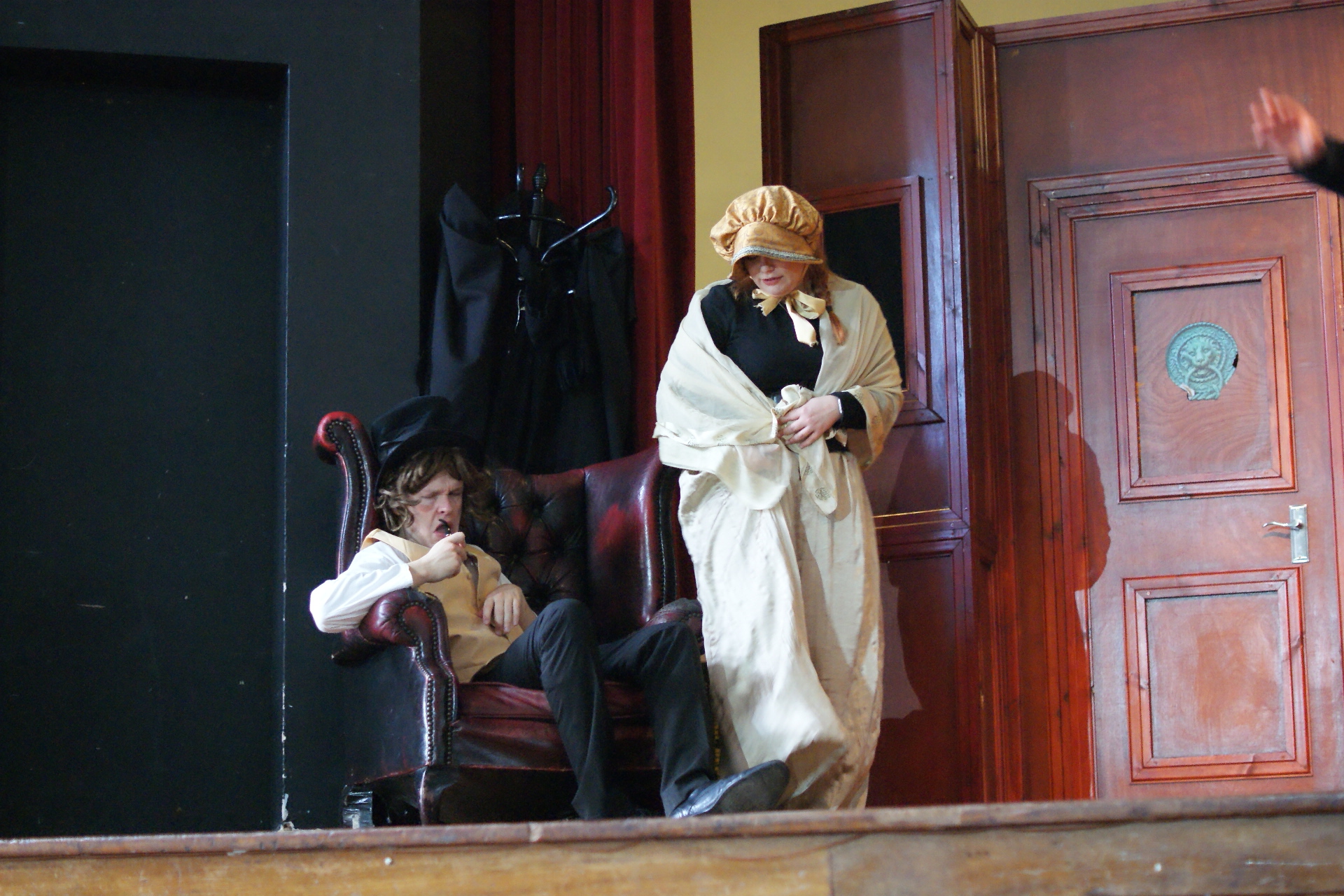 ‘The acting was wonderful and it was very amusing, entertaining and interactive’. (anonymous)

‘The performance was amazing- it did not matter who was playing who they made the part come alive.’ Lily W 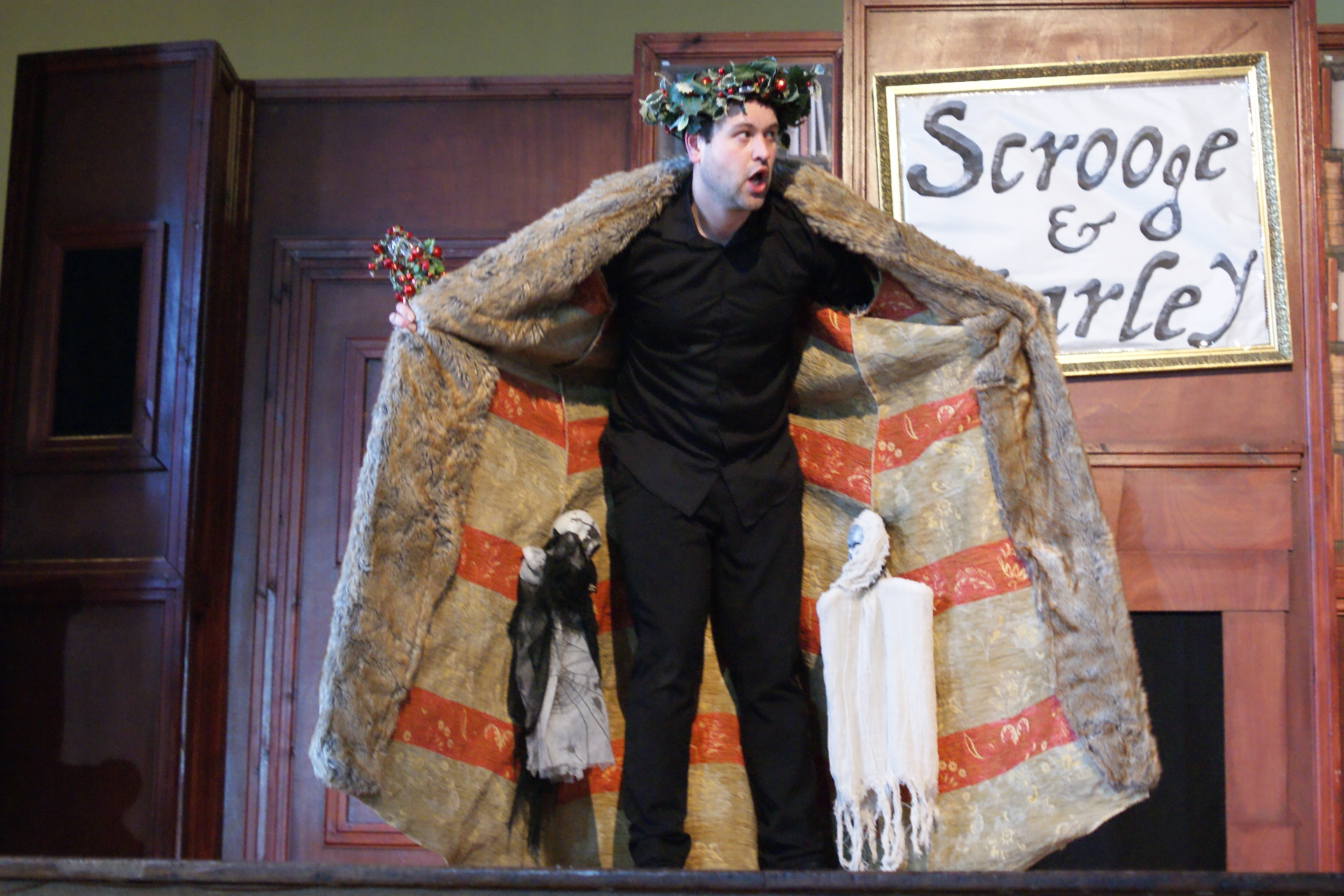 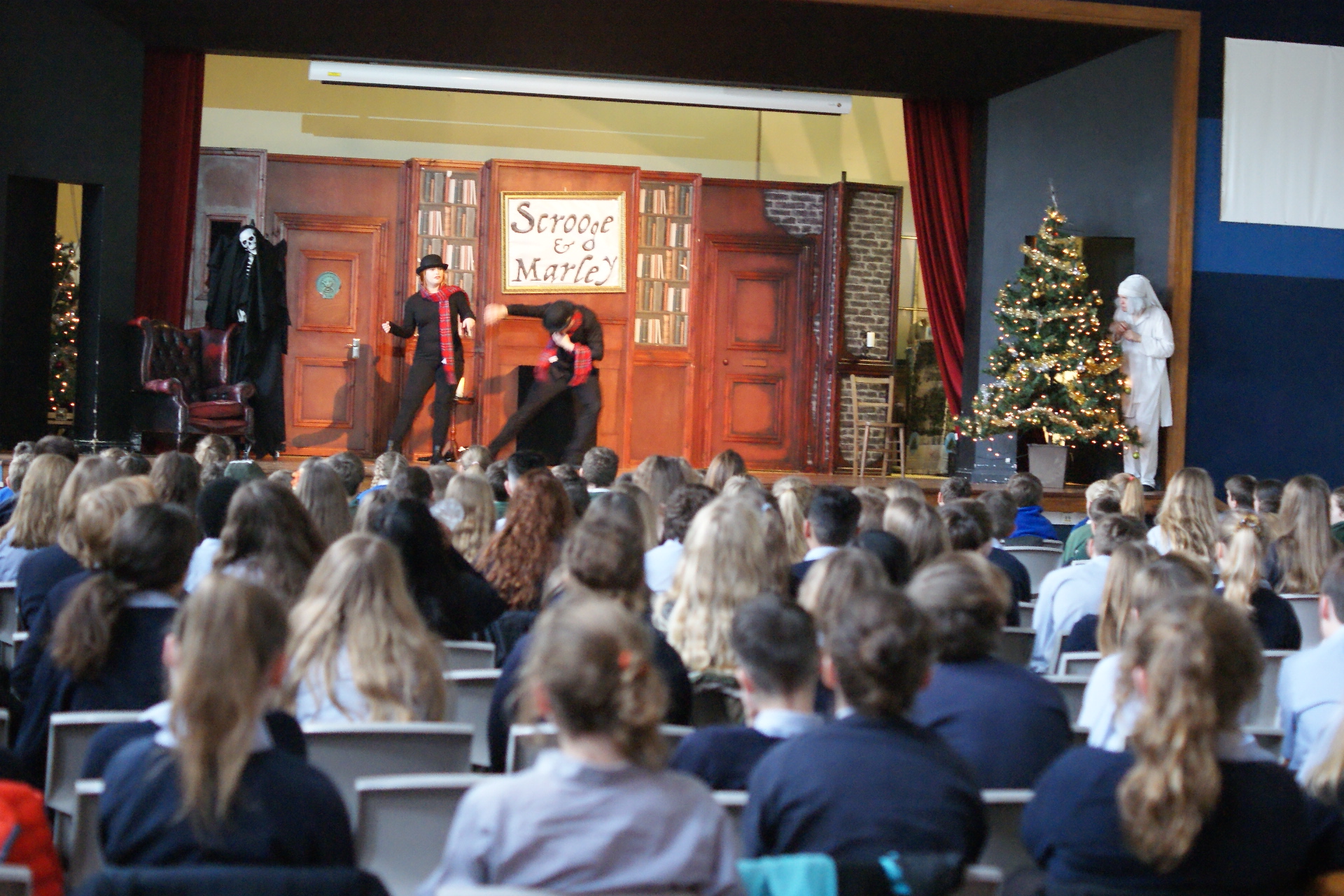 ‘The play was cool because the characters used expressions and a lot of movement. It was full of joy and fun.’ Oscar S

‘I really enjoyed it - they interacted with the audience. I found it really funny - it is my new favourite play.’ Chloe A

It would not be an English Faculty in Focus without some fancy dress! As you can see below, our English Faculty staff and Year 7 pupils were eager to dress up on Thursday 29 November as literary characters in texts that pupils study in Key Stage 3, including Private Peaceful, A Midsummer Night's Dream, Oliver Twist, A Christmas Carol and Much Ado About Nothing. There was a great energy around the school and much questioning as pupils tried to work out who was who! 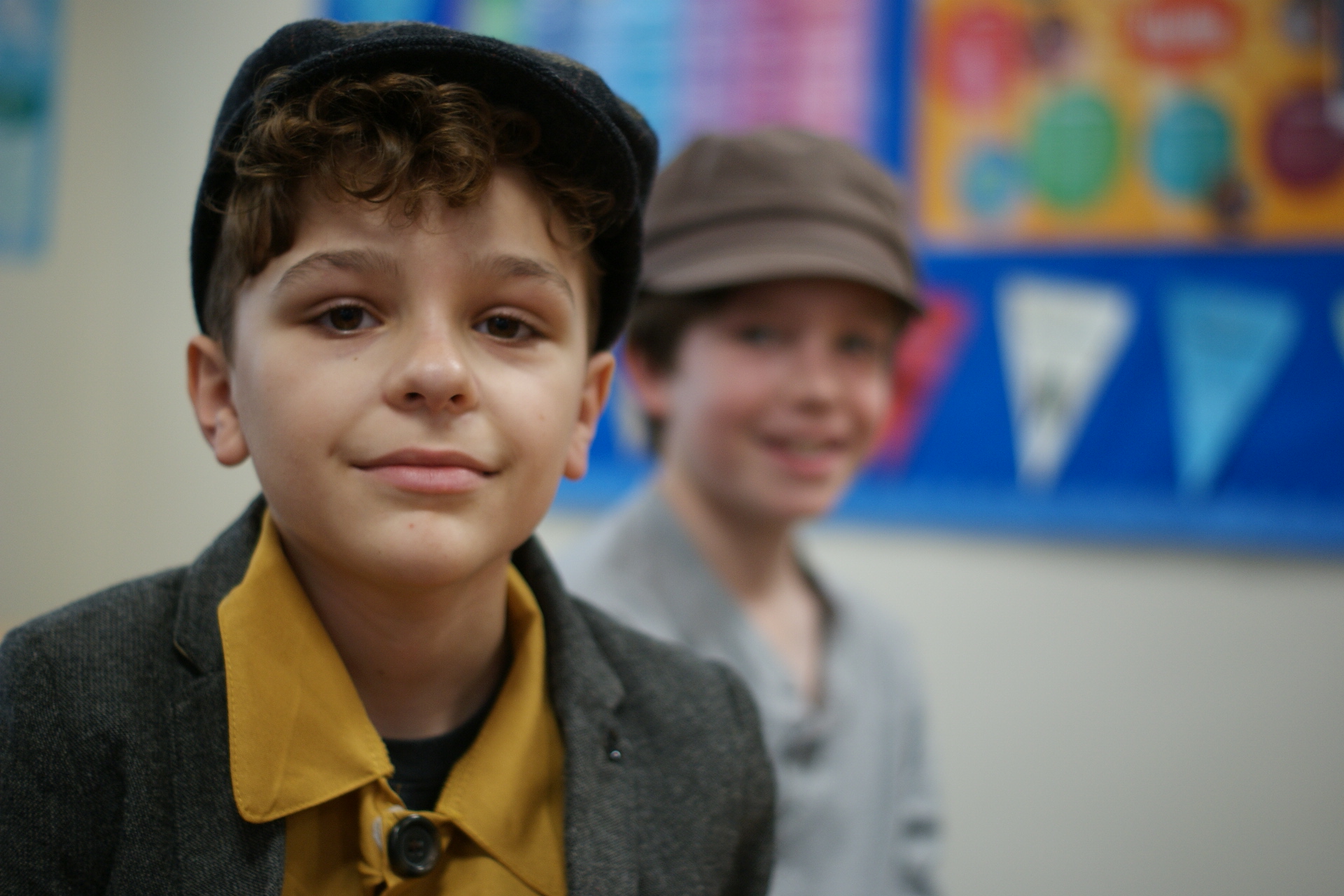 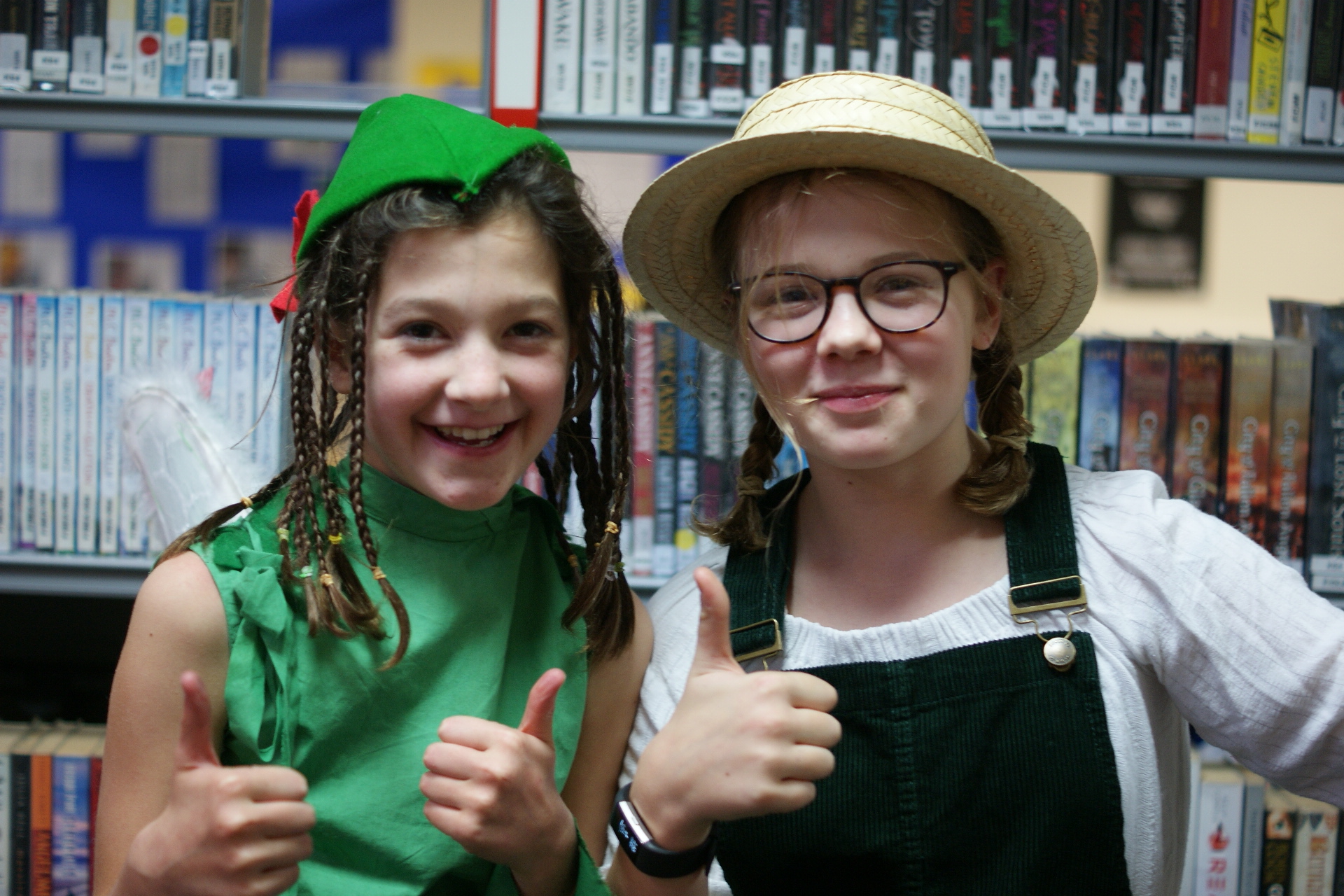 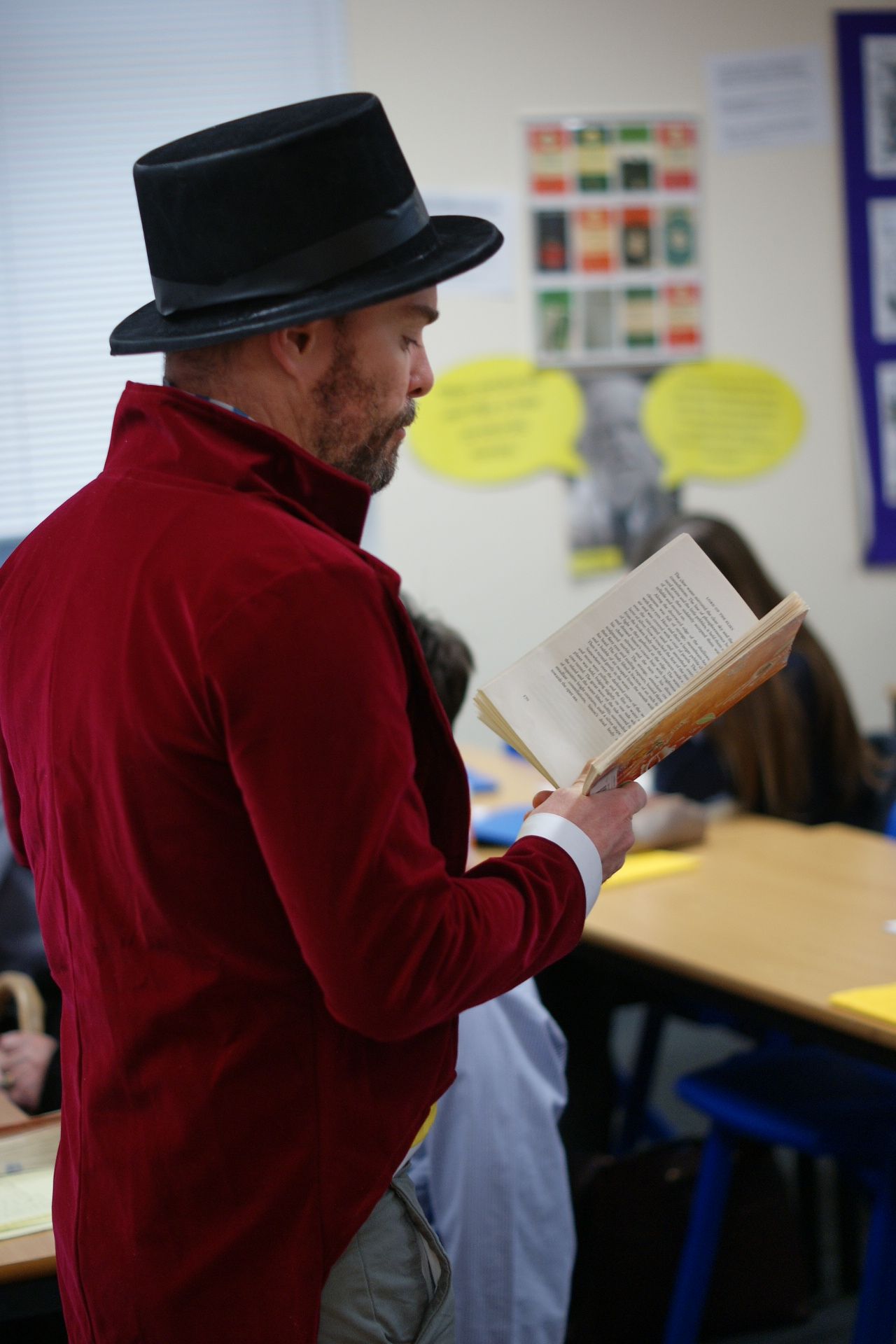 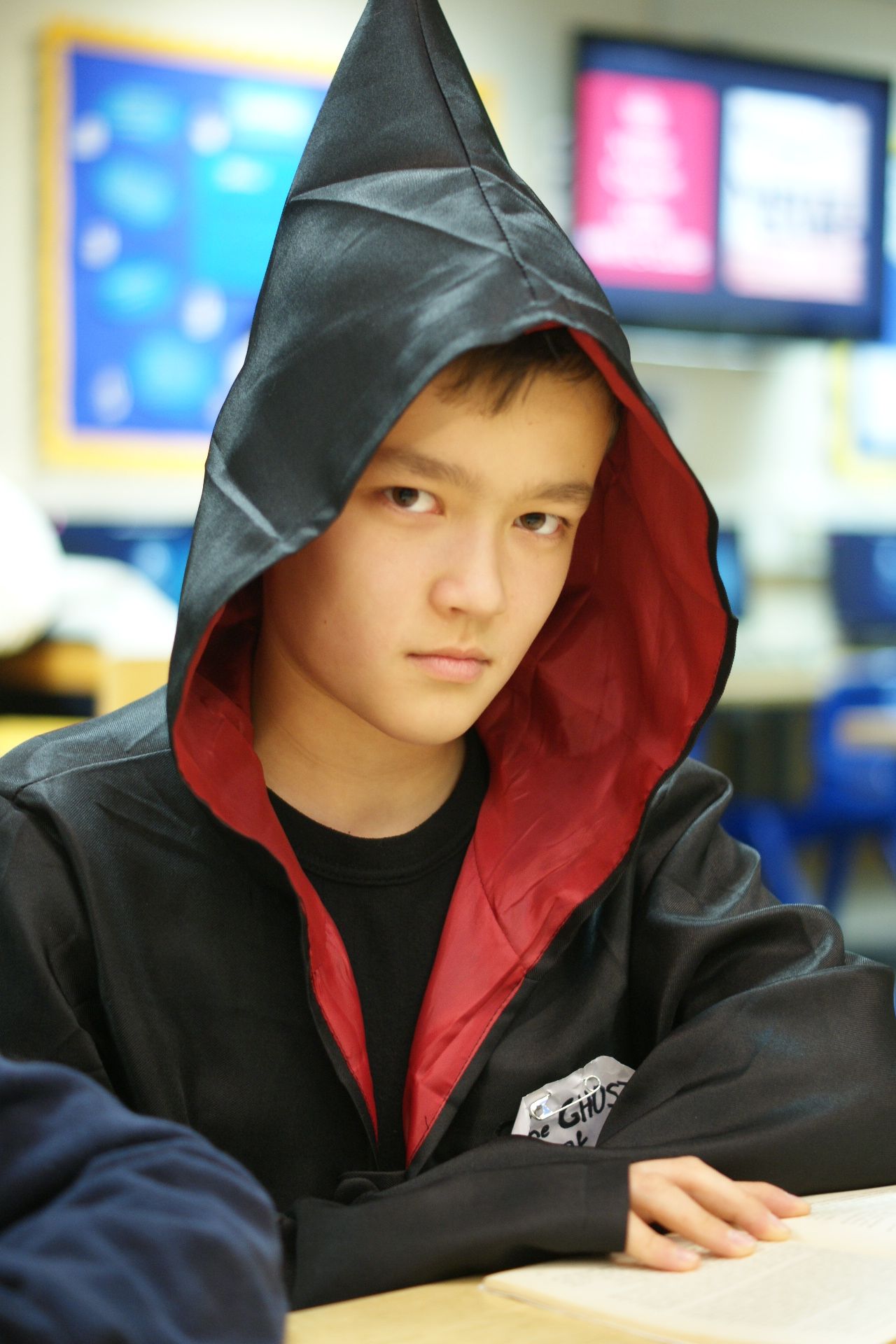 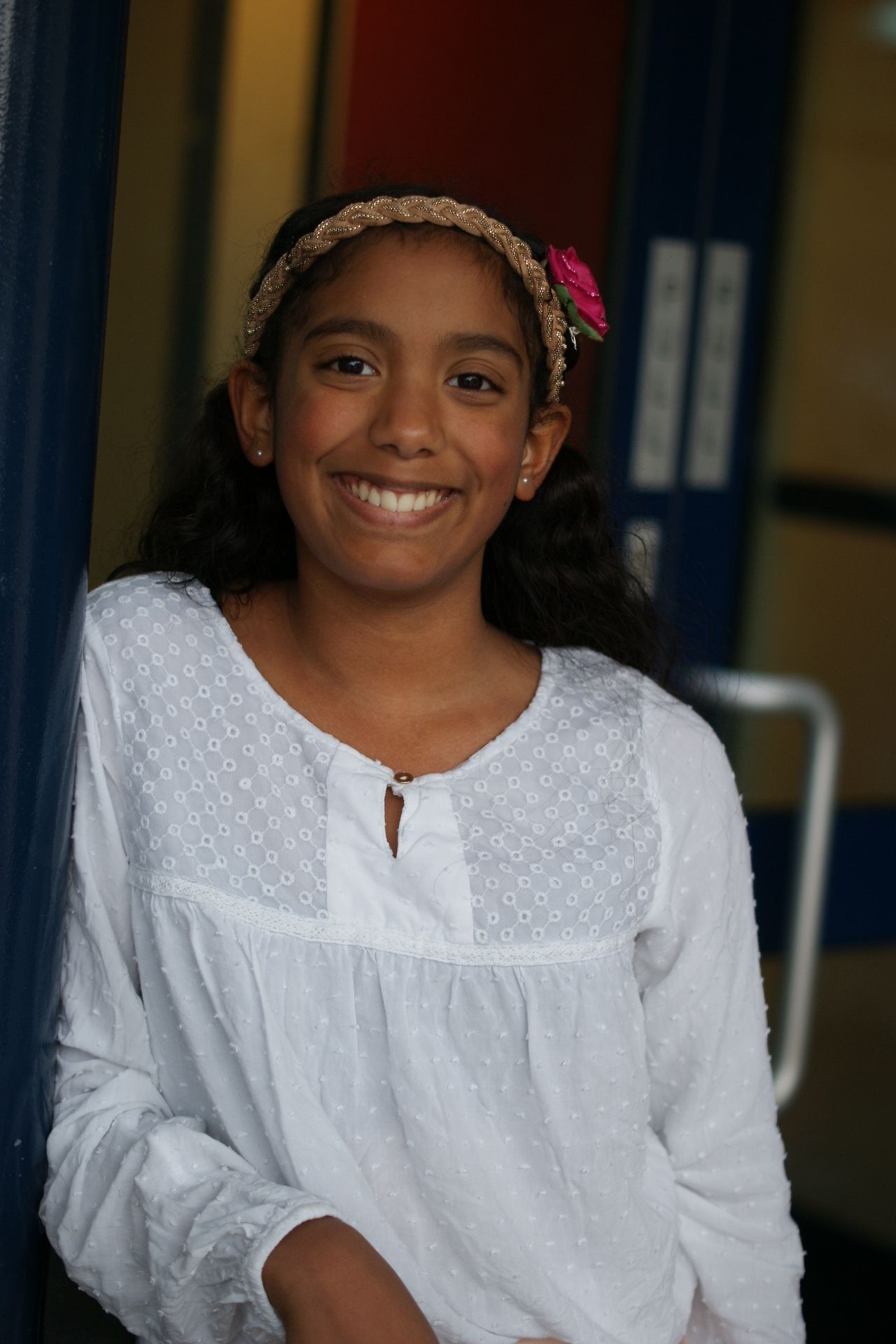 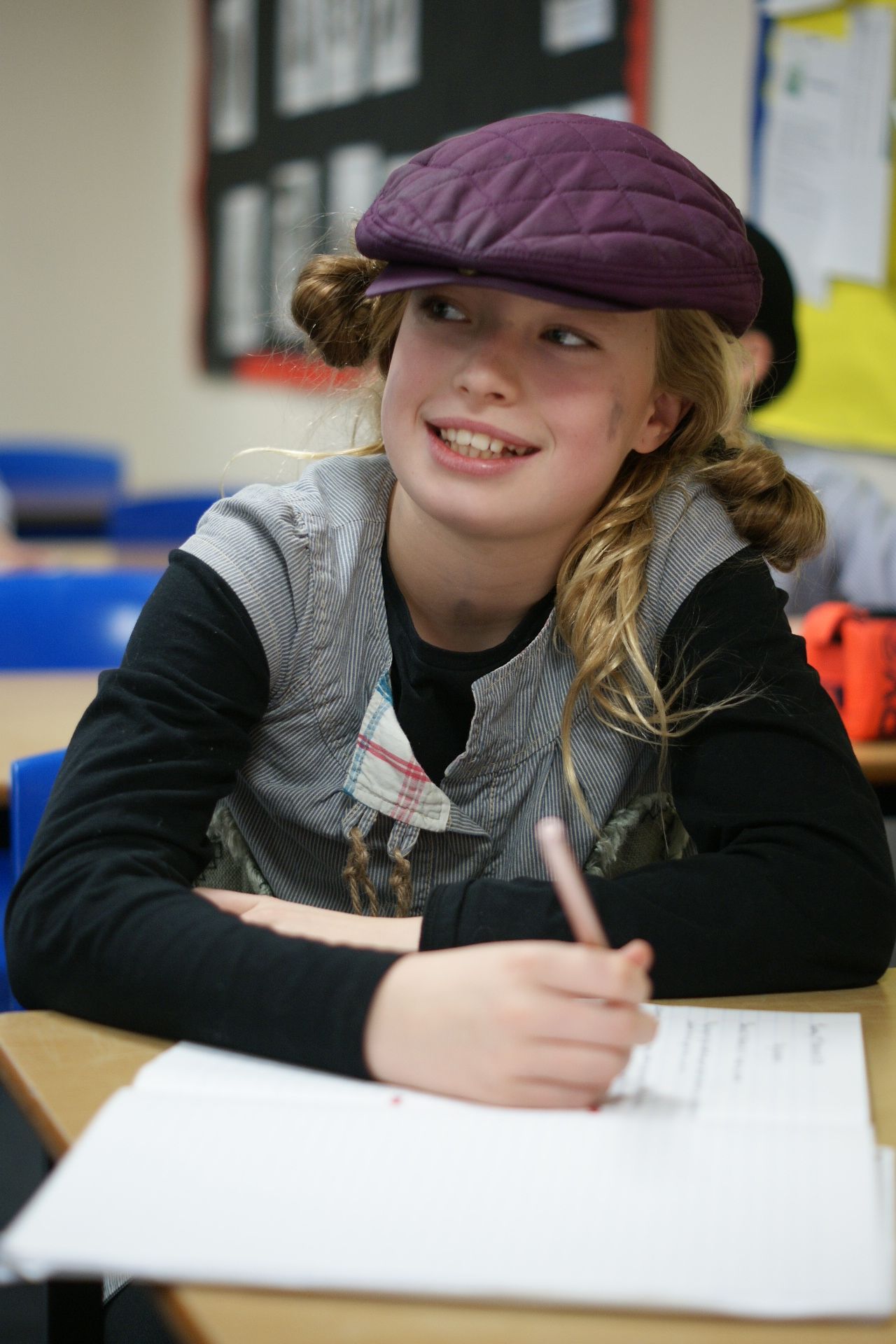 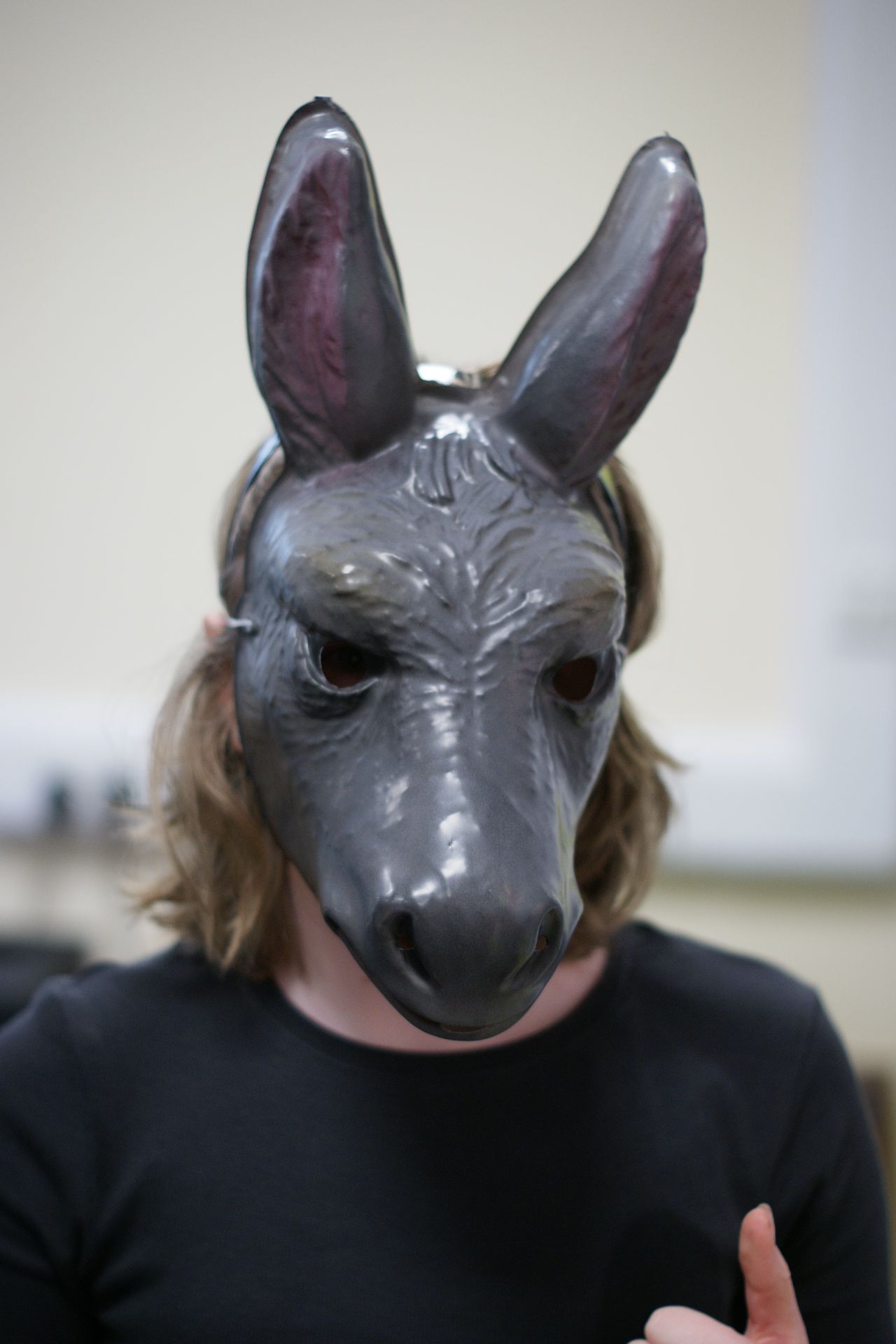 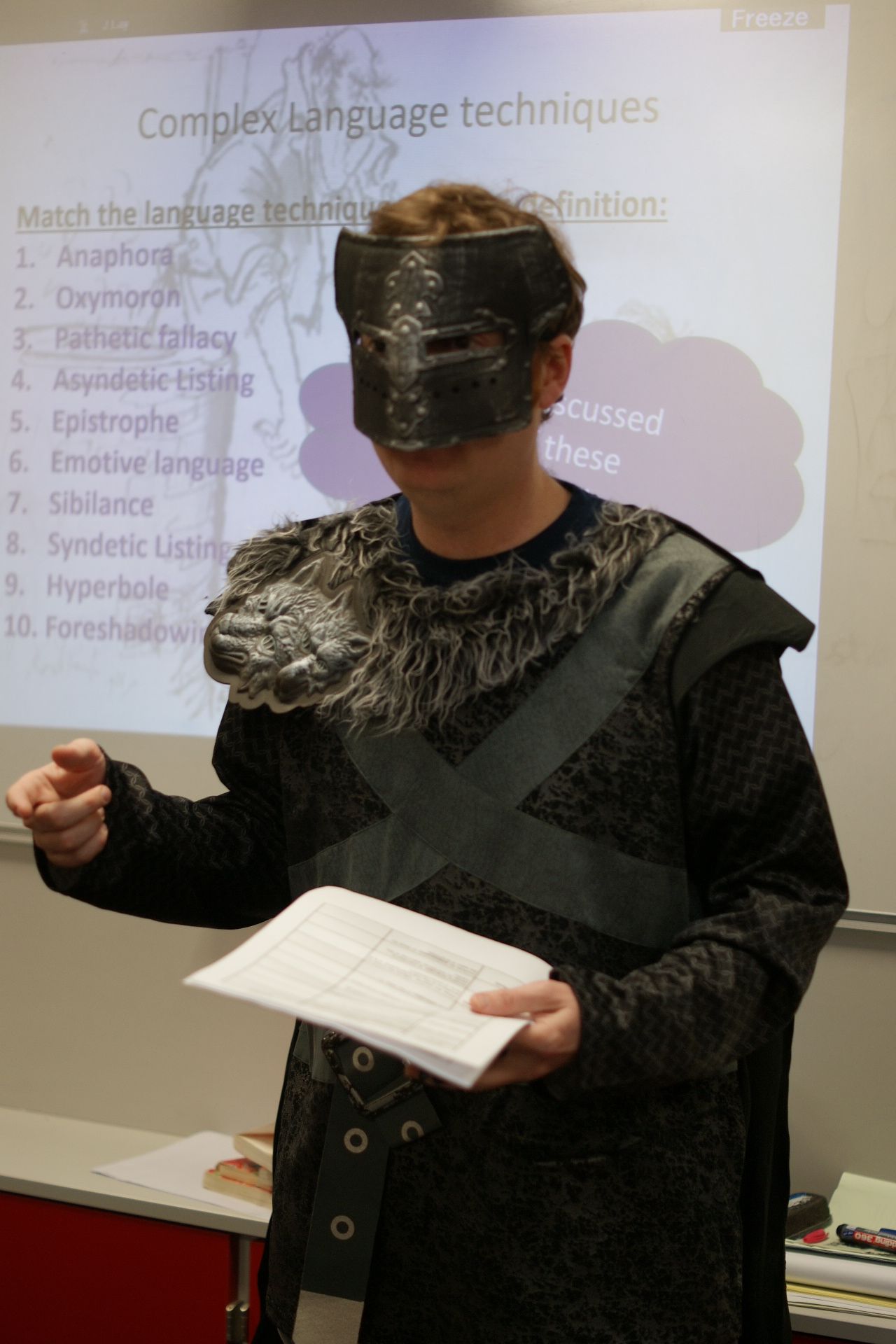 Our final week was rounded off with a special one-off Slam Poetry lesson for all pupils in Years 7, 8 and 9. This expressive form took hold of pupils’ imaginations and it was not long before we had passionate performances discussing deforestation, feminism, climate change and many more important issues close to their hearts. Two instances in particular stick in my mind after teaching this lesson: one in which a beaming Year 7 approached me after our lesson to ask if I was a feminist - my response earning me a crisp high five; another when a pupil eagerly rushed up to me at lunchtime, asking to go and get her book, so that she could show her Religious Philosophy teacher her poem. 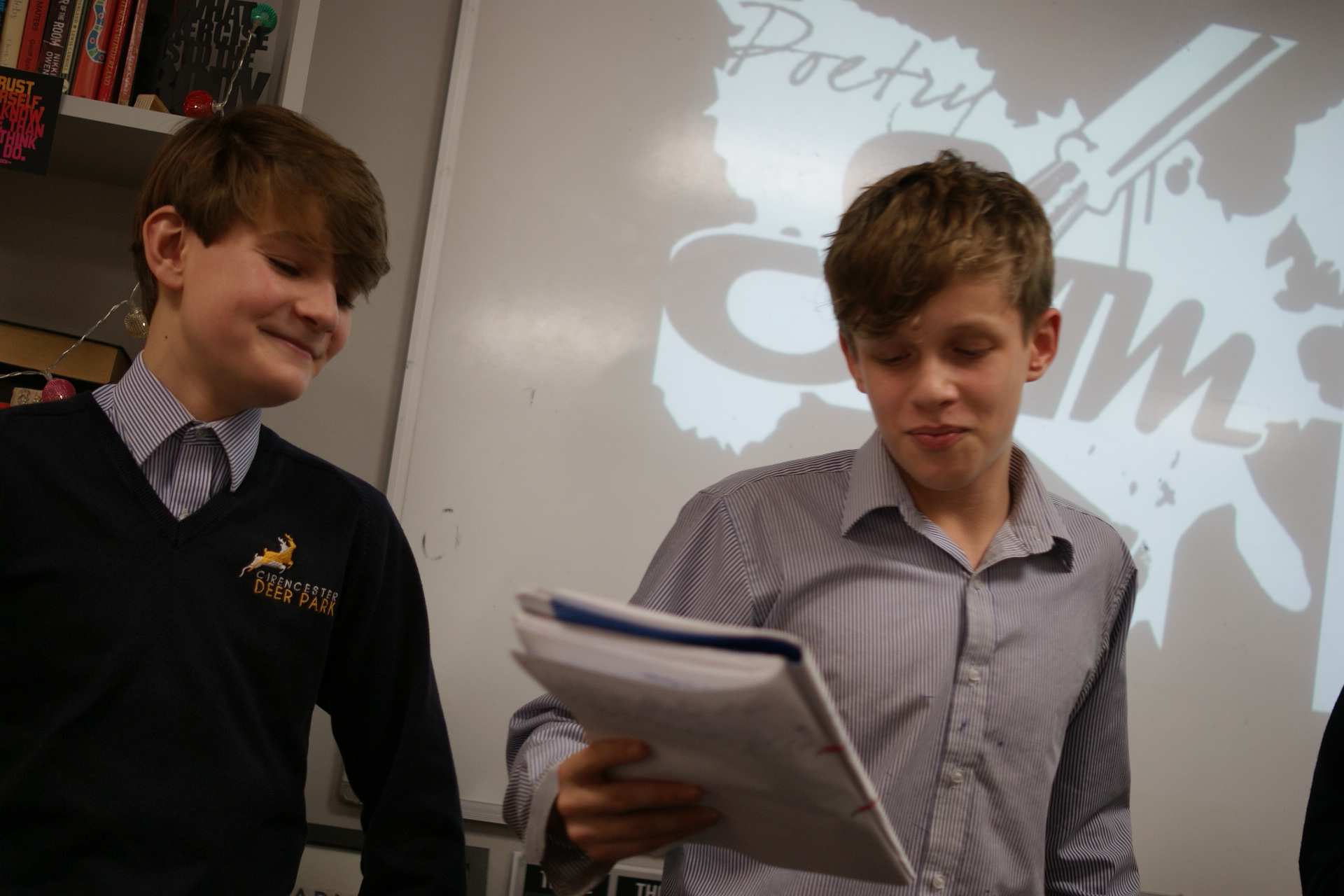 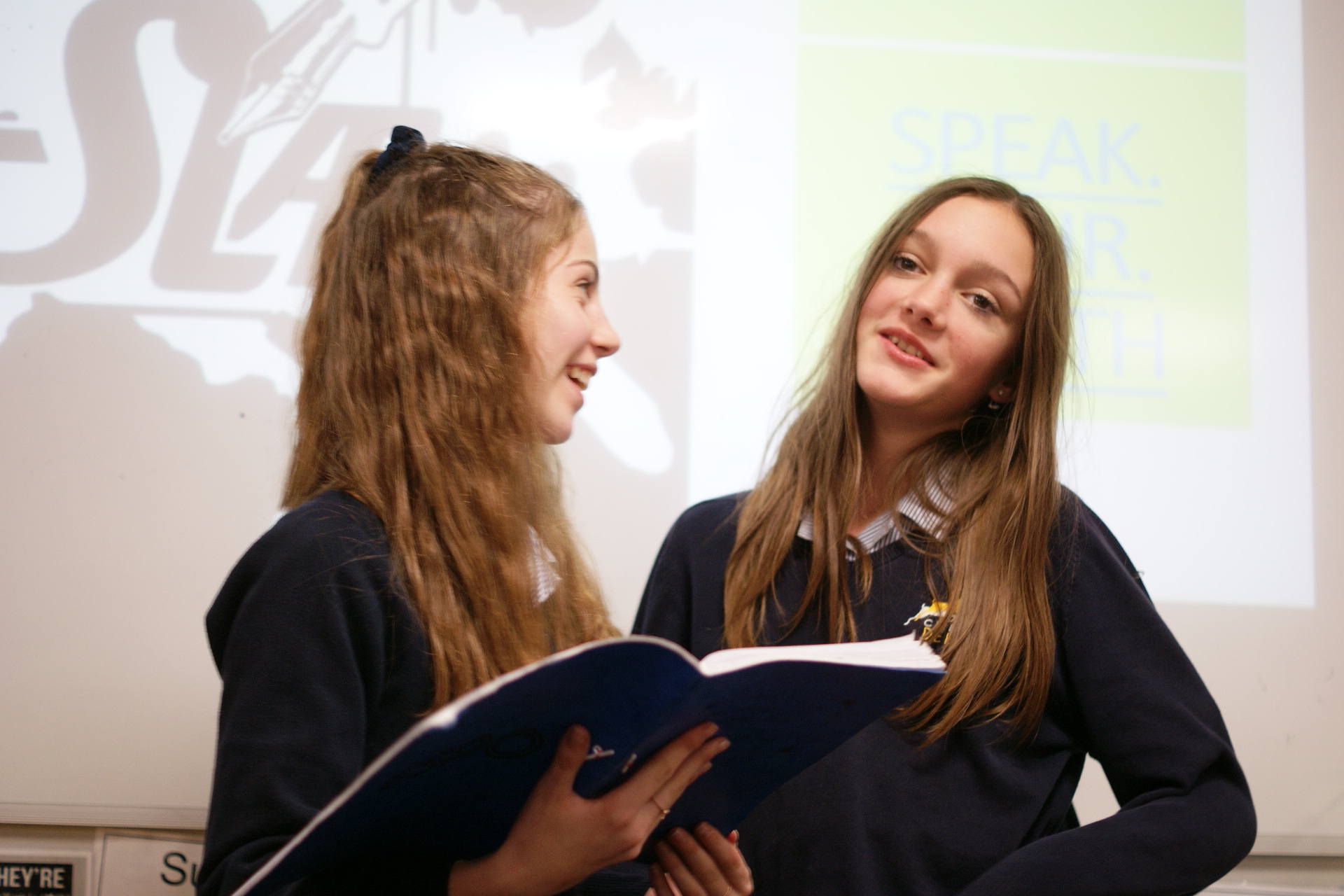 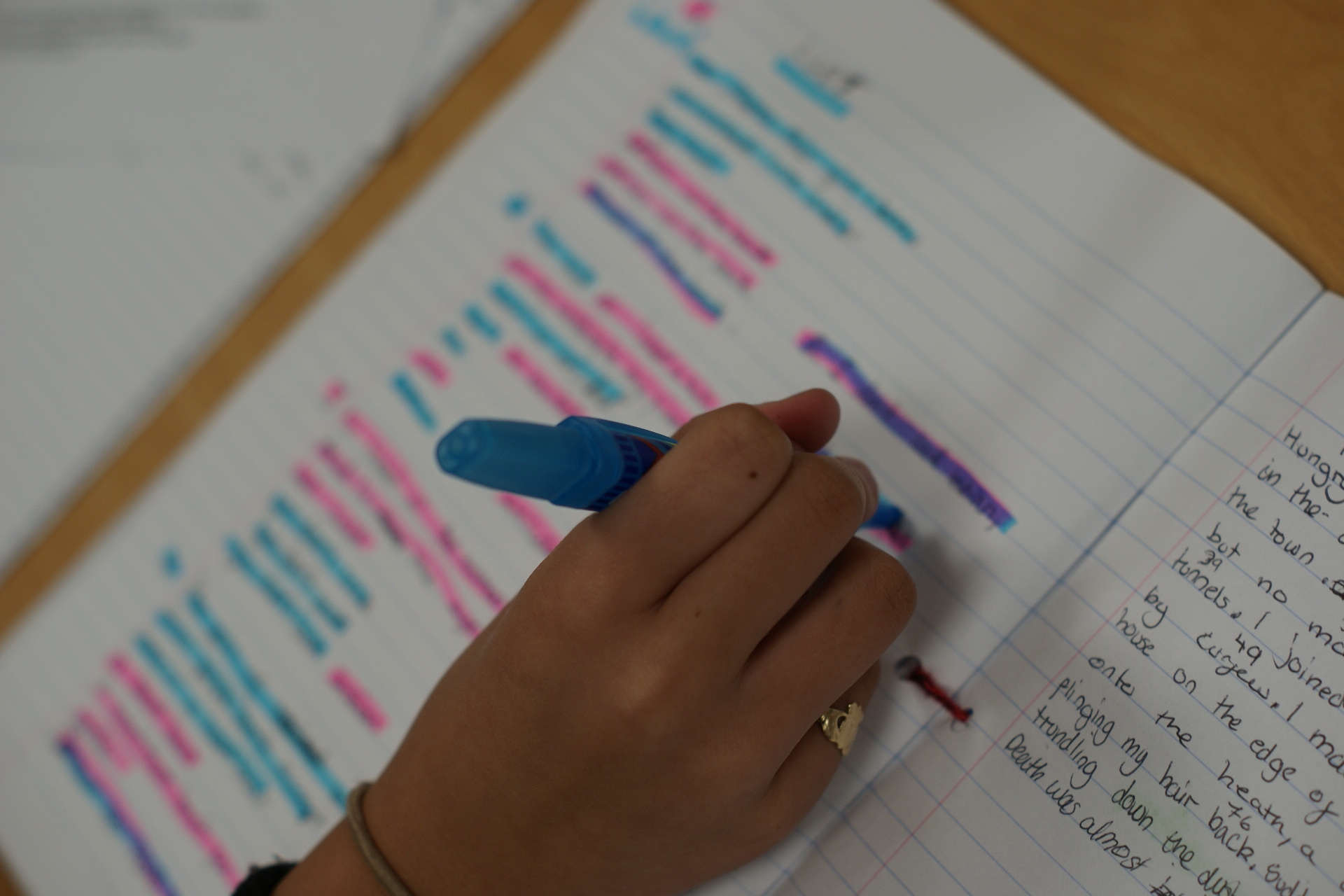 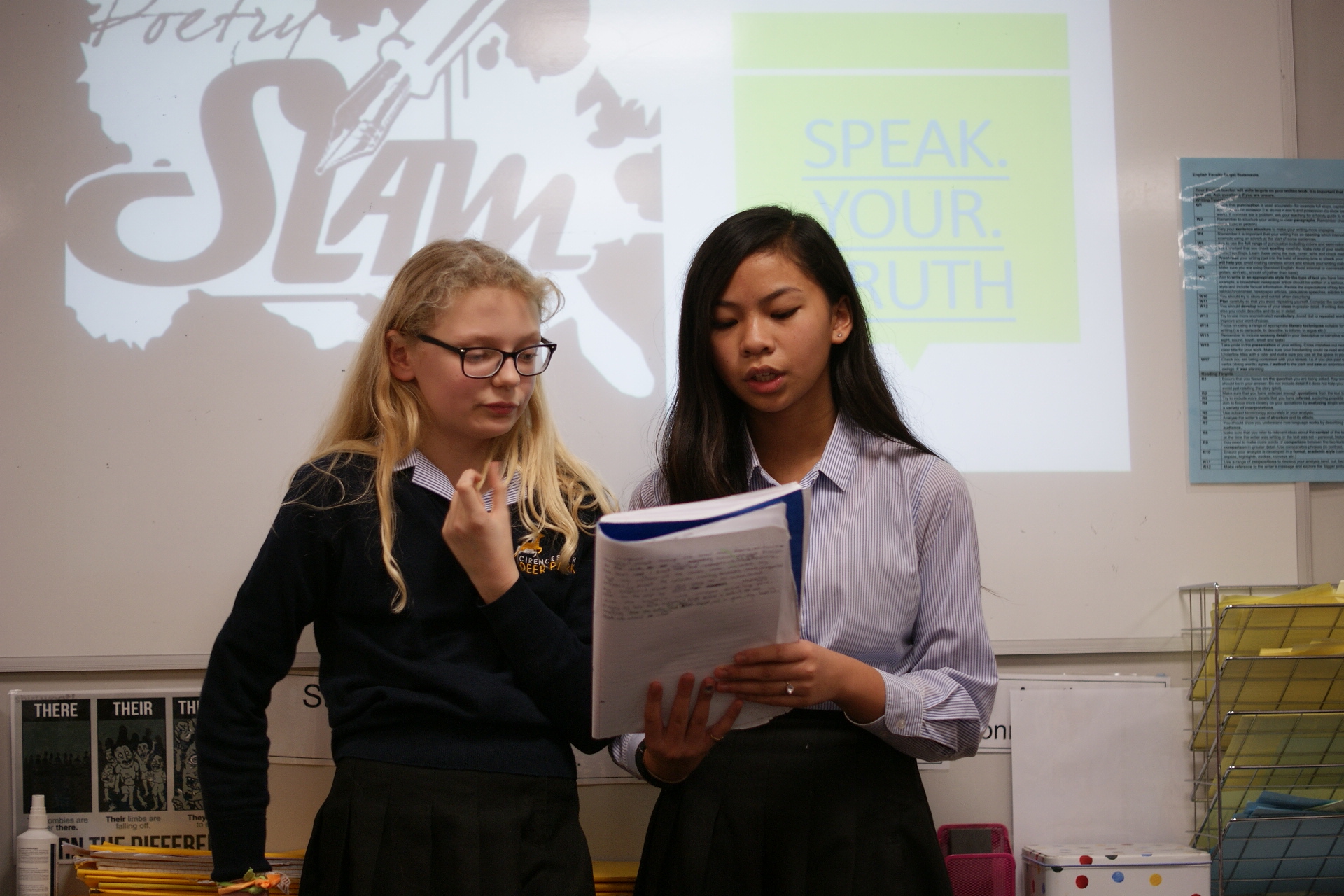 "For me this is at the heart of why we hold the Faculty in Focus events here at Deer Park -  whilst engagement in lessons is a clear way to tell a pupil is interested in learning, it is when they continue to be excited afterwards that you know you have truly made an impact." Mr Morgan, English teacher

Mrs Davies, Head of Faculty, recommends 'Regeneration' by Pat Barker: The novel explores the experience of British army officers being treated for shell shock during World War I at Craiglockhart War Hospital in Edinburgh. I love the fact that its main characters are based on real individuals, poets Siegfried Sassoon and Wilfred Owen, who were hospital patients. The psychiatrist treating them, William Rivers was also a real person. Barker's novel is about the shocking effects of War on both individual identity as well as the structure of society.

Mr Morgan recommends The Carpet People by Terry Pratchett: A Lord of the Rings-esque adventure set on a carpet.  The world is being devastated by a phenomenon known as the Fray, a great sweeping that destroys Snibril's village. Together with his brother, the tribe's leader, they must travel the world in search of a new home. From the great penny to the caverns of the Underlay, Snibril must gather allies from across the Carpet to help defeat the Fray worshipping Moul's: fearsome, animal-like creatures from the dark unswept regions at the edges of the Carpet.

Mrs Farbus recommends How to Stop Time by Matt Haig: Tom Hazard has a dangerous secret. He may look like an ordinary 41-year-old, but owing to a rare condition, he's been alive for centuries. Tom has lived history--performing with Shakespeare, exploring the high seas with Captain Cook, and sharing cocktails with Fitzgerald. Now, he just wants an ordinary life. So Tom moves back to London, his old home, to become a high school history teacher - the perfect job for someone who has witnessed the city's history first hand. Better yet, a captivating French teacher at his school seems fascinated by him. But the Albatross Society, the secretive group which protects people like Tom, has one rule: never fall in love. Brilliant!

Mrs Voss recommends is the biographical book Not Without My Daughter by Betty Mahmoody, detailing the escape of Betty and her daughter, Mahtob, from Betty's abusive husband in Iran.

Miss Tricker recommends Northern Lights by Phillip Pullman. Lyra Belacqua, an orphan, who lives with the old scholars of Jordan College, Oxford. Together with her daemon Pantalaimon, Lyra's uncomplicated life is about to be turned upside down with an amazing and terrifying chain of events, beginning with her uncle Lord Asriel's visit to the College to plan an expedition to the Northern Lights. His goal is to find the source of 'Dust' and a possible gateway to another world. Brilliant book if you love fantasy!

Mrs Sinden recommends Birdsong by Sebastian Fawkes: One of my all-time favourites. A young Englishman Stephen Wraysford passes through a tempestuous love affair with Isabelle Azaire in France and then enters the dark, surreal world beneath the trenches of No Man's Land, crafted from the ruins of World War 1 where tragedy and love intermingle! Totally absorbing!

Mr Reed recommends Station Eleven by Emily St. John Mandel: Set in the Great Lakes region of North America, the novel tells the story of how society recovers after a swine flu pandemic. In a post-apocalyptic world, the only way for the human-race to re-establish some form of civilisation is to tour Shakespeare’s plays to the disparate communities which begin to pop-up in the aftermath.

Mr Lay recommends A Monster Calls by Patrick Ness: A poignant book about loss and grief told in a sensitive and beautiful way. It is book that will lead you through a gamut of emotions as you follow the story of Connor,  a lonely boy who meets a creature that both comforts him and forces him to confront his fears.

Ms Constant recommends All The Light We Cannot See by Anthony Doerr: A story of childhood interrupted by war. Two children—a blind French girl Marie-Laure LeBlanc and a German orphan Werner Pfennig—are caught against their will in the unrelenting destruction of World War II. This is a story of their lives, until the brief moment in which they meet during the summer of 1944. It is told in lightning-quick chapters alternating between the moments from their childhoods and adolescence until the fateful day they meet during the bombing of a French city.