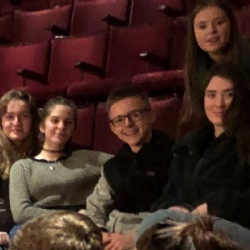 On Wednesday 28 November 2018, members of the Cirencester Deer Park School English Faculty introduced our Year 11s to Macbeth in the way the great bard intended: by taking them to the theatre. Despite being midway through the first week of their mock GCSE exams, the energy was clearly still high on the coach as we were treated to a range of songs on the way to the Theatre Royal Bath.

The performance, as you can see from the newspaper quote above, was a wonderful tour de force of acting with a post-apocalyptic twist to the classic tale. Our tragic hero was now a resistance leader with the high towers of his castle swapped for a set of gritty bunkers. The witches brought to life with some delightfully terrifying acrobatics, masks and costumes. Throughout the entire show the pupils were rapt with attention and represented the school perfectly. Afterwards a member of the audience approached one of our teachers to ask which school we were from. On replying that we were Cirencester Deer Park, they simply replied: “Perfect, much quieter than other schools!”

A final testament to the incredible work ethic of our Year 11s is that even though many of them did not get home until past midnight, they all diligently turned up to continue their mock exams the following morning, still buzzing with excitement from the night before, if a little bleary-eyed.

"It was really great to see the play come to life. The acting was amazing." Charlotte B

"I really enjoyed the play especially the realistic action when MacDuff and Macbeth fought." Georgia O