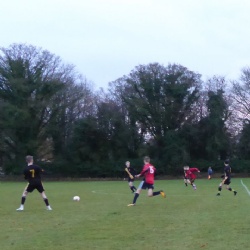 Round 4 of the ESFA Under 16 Premier League Schools' Cup

Unfortunately, on Wednesday 21 November 2018, our Year 11 Football team lost to Marling 2-1 in Extra Time. This Round 4 match of the English Schools' Football Association Under 16 Premier League Schools' Cup was of high quality and extremely well contested and competitive in very difficult, wet conditions.

In the first half we played some really good football and had a couple of excellent chances to score but their keeper made some miraculous saves. Unfortunately, out of nowhere Marling caught us on the break with a ball over the top. Their striker was clearly in an offside position and the flag went up. However the referee decided to ignore it and play on - they capitalised on this and scored. Extremely unfortunate! Our side was understandably rattled for a few minutes but to the boys' credit, they quickly picked up the pace once more and put Marling under pressure. This led to some fast flowing football either side of half time with Luca R and Luke P proving really dangerous in possession of the ball.

In the second half, a sweeping move quickly followed, involving Luca and Luke, plus Brad R down our left hand side, which led to a good team goal, finished off by Adam H. In this period of the game we were stronger than Marling and probably should have scored again to take the lead. But unfortunately we could not quite get the break through, which proved costly.

As the match went into the latter stages, spaces naturally opened up as both teams were tiring and chances went begging for both sides. This included strong penalty appeals, which were not given. Leo K and Connor K were fantastic in this period of play, showing unbelievable determination in defence and goal. The score stayed at 1- 1 and went into extra time.

With penalties looming, Marling eventually scored on the break with a snap shot from outside the box, which was initially saved but the rebound was knocked in from a tight angle. We pushed really hard for the equaliser but even an outstanding half volley from Ben C in the last minutes wasn't quite enough to score.

"The boys and I are gutted about the result but they should be really proud of their performance and outstanding results this year. We will be highly motivated and looking to beat Marling in our district matches after Christmas next year. Thanks to the whole squad, everyone's support of the team and Orlando H for his brilliant leadership as Captain. The team have been fantastic and a pleasure to coach!" Mr Schlaefli, PE Teacher

Congratulations to Marling – good luck in the next round!

Men of the match: Leo K and Luke P.

Orlando: "Absolutely gutted to lose as I thought we were the better team".

Aaron: "We need to remember this feeling and make sure we learn from this and beat Marling next time in our district matches."