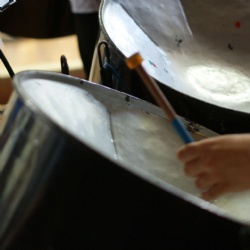 On Tuesday 9 October 2018, 32 pupils in Years 3, 4 and 5 from Brimscombe Primary School visited Deer Park for a Steel Band Workshop.

The primary pupils have been learning about the world and some of the cultures and music. Last year one of their teachers borrowed a steel drum for the pupils to try out, but this year we thought we would go a step further and give the pupils an opportunity to experience what a whole steel band sounds like.

The session started with Music Teacher Mr Cook asking the young pupils what they knew about steel drums and where they come from. He was pleased to discover that they did know that steel drums originate in the Caribbean; they were not aware, however, of how the drums were made or from what, so Mr Cook shared with them that they are made from old oil barrels and that, with expertise and a brass hammer, those oil barrels are tuned to make the sounds the pupils were hearing that day.

The Deer Park Steel Band, which incorporates pupils in Years 10 and 11, played two pieces from their repertoire. They had chosen a couple of popular pop anthems - Ah-Ha's Take on Me and There She Goes by the La's - which went down very well with the pupils but also with their teachers who, unlike the pupils, had actually been born when these songs were in the charts!

Having listened to the music, we then moved on to the main part of the workshop: playing the drums. Mr Cook had made two simple arrangements of pieces for the Brimscombe pupils to play: Bob Marley’s Three Little Birds and The Lion Sleeps Tonight by The Tokens. The pupils were divided into groups so that they could take turns to play the different steel drums and also sing to accompany the band.

Amy (Year 11), one of the senior members of the Deer Park Steel Band, who plays the tricky Soprano drum, said of the workshop: "It was a very enjoyable morning and it was interesting to see how challenging the primary school children found the co-ordination aspect of play the drum. However, with some resilience they were able to play the part they were given and made a great sound together."

To round off the workshop the Deer Park pupils ended with a performance of Pompeii by Bastille. Nathan, also in Year 11, said of the workshop: "It was a very positive experience to be able to share our unique band with children of other age groups. I enjoyed helping the younger pupils who had never played a steel drum before to have a go. I was very impressed with their enthusiasm."