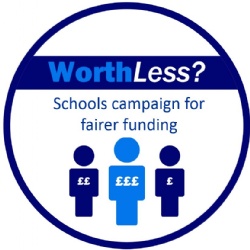 You may have seen on the news and in the press the Headteachers who campaigned for improved school funding at Westminster on Friday 28 September 2018.  Over 2,000 head teachers attended in London with many more supporting their actions too.  At the same time, in Gloucestershire, other local secondary heads and I were meeting with the Local Authority to hear how further savings have to be made in this county from budgets from April 2019 onwards.  The national funding campaign Worth Less? calls upon the government and Chancellor to address the issue of funding for education.

It is clear from the emails that colleagues and I have received, that parents overwhelmingly support the need for much improved investment in our schools.   As soon as we receive a reply from the Chancellor, we will let you know. I am sure everyone will watch with interest to see how he responds to our requests during the Autumn Statement (Budget) on Monday 29 October 2018.

Following recent headlines, Headteachers across the country hope very much that the Government and the Department for Education, in particular, will stop providing parents and the wider public with misleading information about spending on schools.  This week’s scathing letter to the Department of Education from the UK Statistics Authority underlines all of the points that Worth Less? have repeatedly stated to parents over the past three years.

“I am sure you (The Department for Education) share my concerns that instances such as these do not help to promote trust and confidence in official data, and indeed risk undermining them.”  Sir David Norgrove – Head of the UK Statistics Authority 8 October 2018

It is, therefore, wrong to suggest that Government spending on schools is much higher than in other comparable countries, when the Department for Education tries to include spending made by families on university tuition fees (loans to students) and independent (private) school fees.  This adds billions of pounds to headline data but has absolutely no effect on funding received by schools. It is a completely unacceptable way of defending real term cuts.

The Department for Education must now work hard to rebuild trust and credibility. We hope that ministers will apologise unreservedly and put all of their efforts into investing adequately into school funding and supporting much improved recruitment and retention of teachers.

Parents have also asked how they can support the drive for improved funding.  In light of this we are able to let you know that parent groups have lobbied parliament (10 October 2018) and there will also be a national day of parental action on 19 October 2018.  For more information about 19 October, please search #parentsteachersunite on Twitter or Facebook.

We would again like to thank you for your support and confirm that our campaign will remain reasonable and determined with a single goal of ensuring that every school and pupil receive a much better deal in the near future.