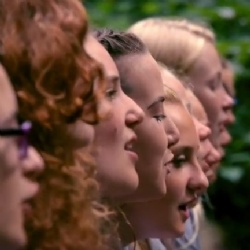 At our annual Open Evening on 26 September 2018, the large audience in the Main Hall enjoyed seeing the first public screening of a song created and sung by Year 9 pupils. The song 'We're What We Become' was the end result of an amazing ten week Songwriting Project, which was run by The Songwriting Charity for 24 Year 8 pupils during the Summer Term. Read about the project...

The lyrics for the song, all written by pupils at Deer Park, are what makes this song so successful and portrays the positive message we instil in our pupils:

Together we are one
together we belong,
forever we'll march on
we're what we become."

The songwriting production was additionally special this year, as all the music was created by the group and then performed and recorded by Year 9 musicians Jaden, Theo and Dylan, bringing a more personal touch to the song.

Jaden (Year 9): "I gained a lot from this experience and opportunity. To be in the process of writing a song from scratch and what it means to write effective music and lyrics has taught me a lot. I am now in the middle of writing my own song with my band for the Talent Show."

Miss Faux, Music Teacher: "I am very proud of all pupils who took part in this year's project, especially getting up and performing in front of the whole school at Party in the Park at the end of the Summer Term. The song is a powerful one which demonstrates the potential and talent we have here at Deer Park."

Ben O’Sullivan, Director of Programmes for The Songwriting Charity commented "This was the loveliest video to edit - I could have made a video of the band on it's own, a video of the singers and a video of them all in and around Cirencester. They were such a joy to work throughout the whole project, pupils really gelling as a whole group, sharing with each other and growing in confidence."