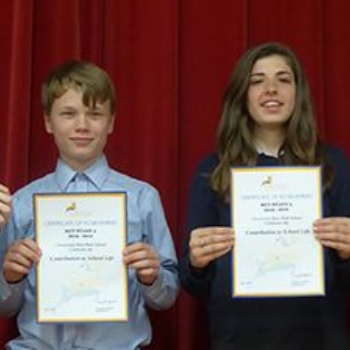 It is always a pleasure to see so many Year 9 pupils and their parents attending our Key Stage 3 Celebration of Achievement Evening. This year's event took place on Thursday 5 May and the evening marks the imminent end of Key Stage 3 for our Year 9 pupils before they move into Key Stage 4 and embark on their GCSE courses in June.

Around 73% of the year group were nominated in the Faculty Awards and further pupils were recognised for their contributions to the wider school community. As Mr Bellamy, Head of Key Stage 3, said "It is a real recognition to merely be nominated for a Faculty Award as this recognises pupils in the top 4% for Attainment, Effort and Improvement." Some of our pupils were nominated by multiple faculties for Attainment, Effort and Improvement and awards also were given for Most Progress. Never have so many pupils been recognised for 100% Attendance as this year; Luke in 9NI was recognised for his outstanding 100% attendance over three years of being at Deer Park.

We seek to challenge our pupils to achieve more than they first think they can and I was delighted to see so many in this year group being recognised for their fantastic achievements, commendable efforts and significant improvements. I am very impressed by their resilience and commitment. Many choose to participate in activities that take them beyond the classroom; over 50 are doing their Bronze Duke of Edinburgh Award and 27 will be volunteering in Ghana in 2017.

A special thank you to Emilie and Evie who performed a stunning piano duet and our thanks too go to our guest, Rich Whincup from The McGuire Programme, for his inspirational words and we hope that this triggered a sense of achievement and resilience with our pupils.

Finally, Mr Bellamy wishes all our Year 9s the very best in the next stage of their education at Deer Park. Remember, think ORANGE!