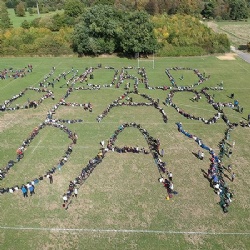 How many jumpers did we tie together?

After months of waiting, the big day arrived! Friday 21 September 2018 marked World Peace Day, a day when the United Nations encourages people to stop and consider how they can promote peace in their own communities and globally. What better day then to attempt a World Record which involves all the schools in the recently formed Corinium Education Trust - Cirencester Deer Park School, Siddington CofE Primary School, Kemble Primary School and Chesterton Primary School.

Chloe D in Year 10 had approached the school back in March 2018 with a fundraising idea for the Ghana 2019 trip: "I came up with the idea when my dad and I were looking for a fun event that everyone could take part in. We researched the world record attempt official website and thought it would be great to do the longest chain of school jumpers." After registering the record attempt, Chloe organised for two independent verifiers for the event to attend - Melanie Scrivens, Community Champion Tesco Cirencester, and Hannah Maundrell from www.money.co.uk. Chloe also enlisted the help of Robert Hamilton, a surveyor from Central Surveying, Cirencester. With the team assembled, it was then a matter of logistics and finding jumpers!

From March to September the team worked hard to raise awareness of the event through assemblies at Deer Park and the primary schools, posters around school, creating and selling peace wristbands, and promoting the event on Twitter and in the local press.

The aim was to beat the current record of 702 jumpers. We knew we had our work cut out, but, with thanks to Lost Property, Friends of Deer Park School, Powell’s School PTA and staff at Deer Park, the pile of jumpers grew bigger.

As a fundraising event for Ghana 2019, the team also looked for sponsorship from businesses. A huge thank you to the following for their very generous sponsorship:

The event itself took place after break on World Peace Day and, following a two minute silence to remember the life and work of Kofi Annan, pupils moved to the back sports field and their designated area to create our giant # WORLD PEACE DAY sign made of pupils and their chains of jumpers. Radio Gloucestershire sent a reporter, Sophia, to report live in very windy conditions for the Anna King show. 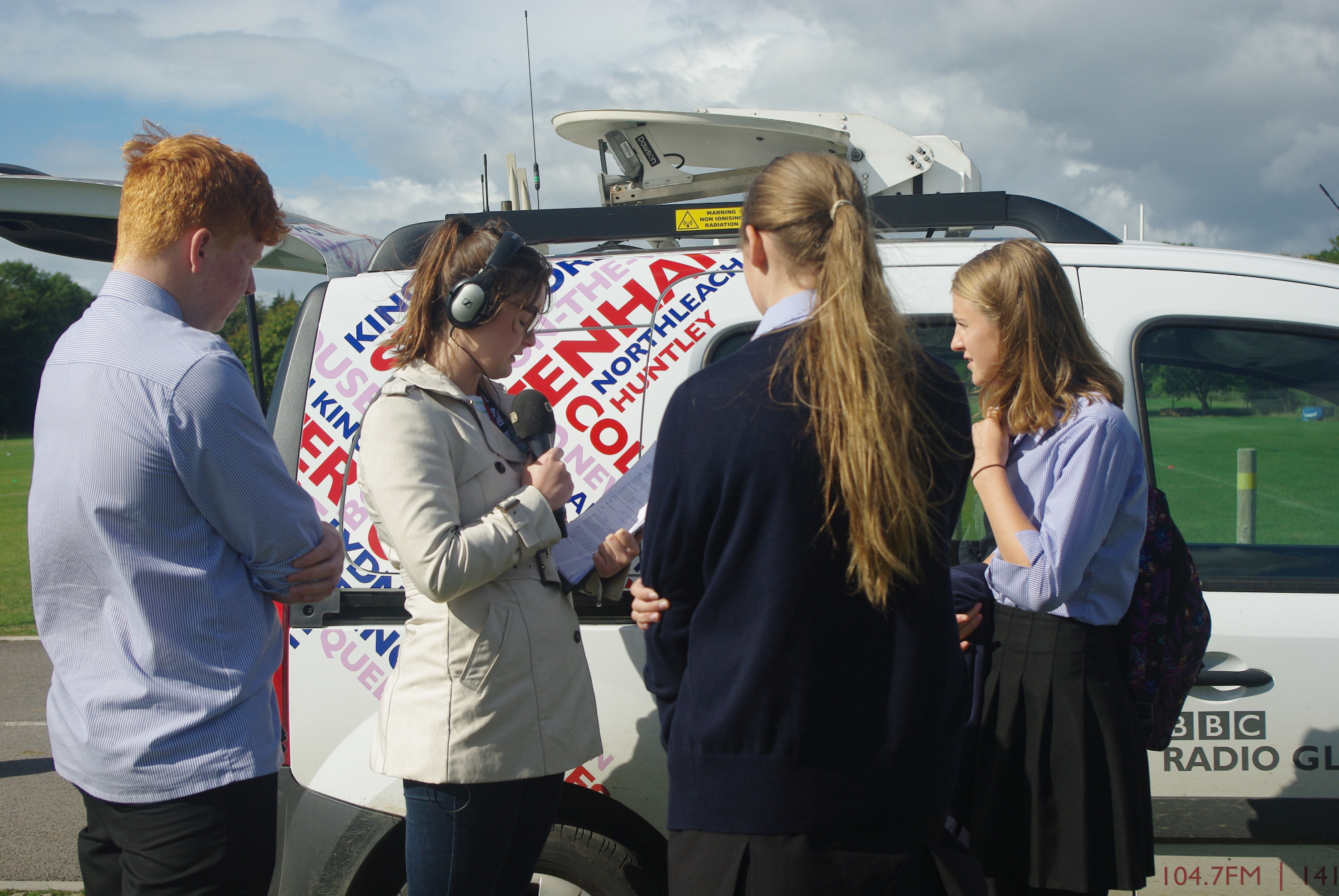 With over 1,100 students taking part, we had to carefully plan who would be going where, but the response from the pupils was fantastic and there was a wonderful sense of co-operation amongst the organised chaos. Once formed we could see a sea of various blues, greens and red, all made up of school jumpers. 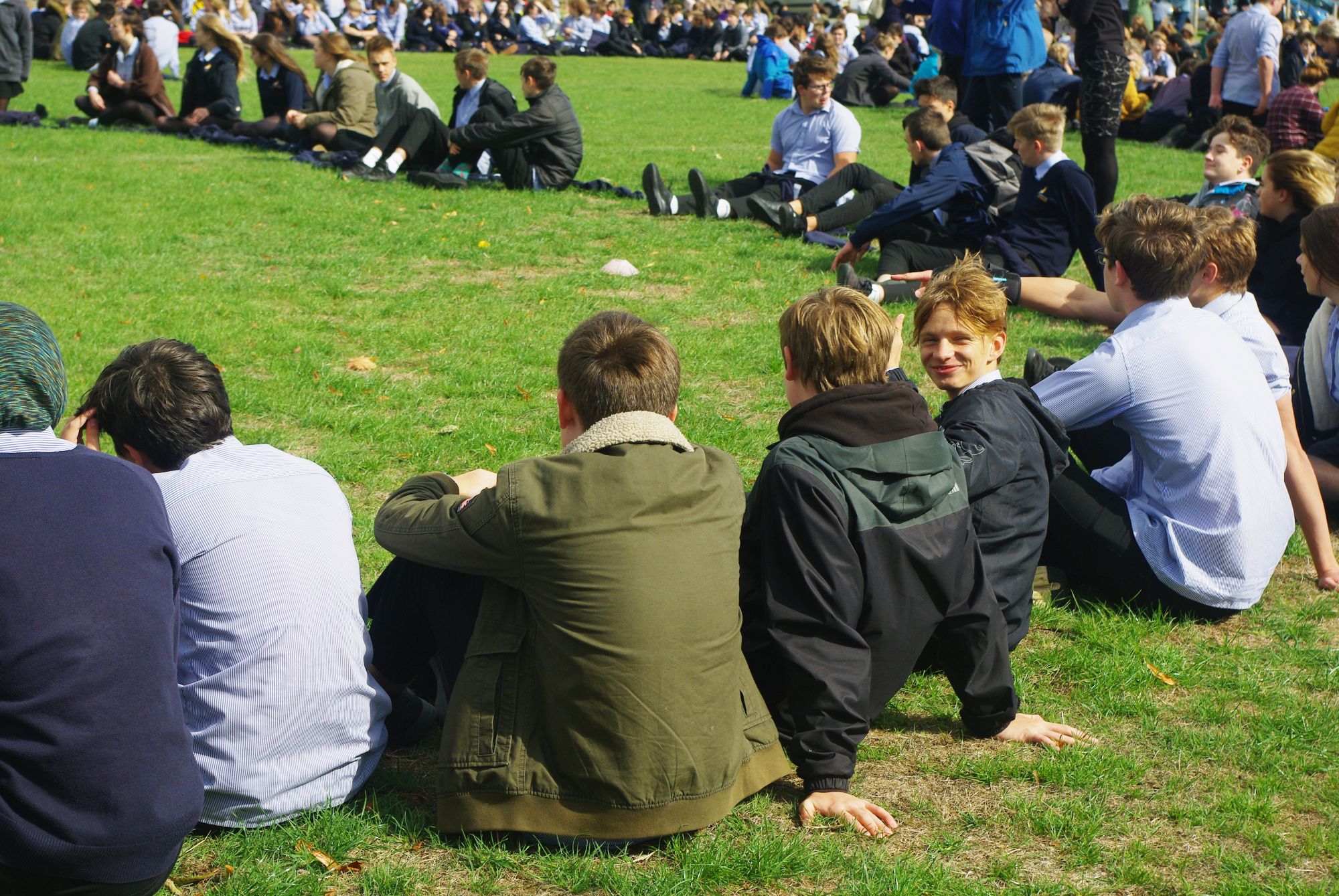 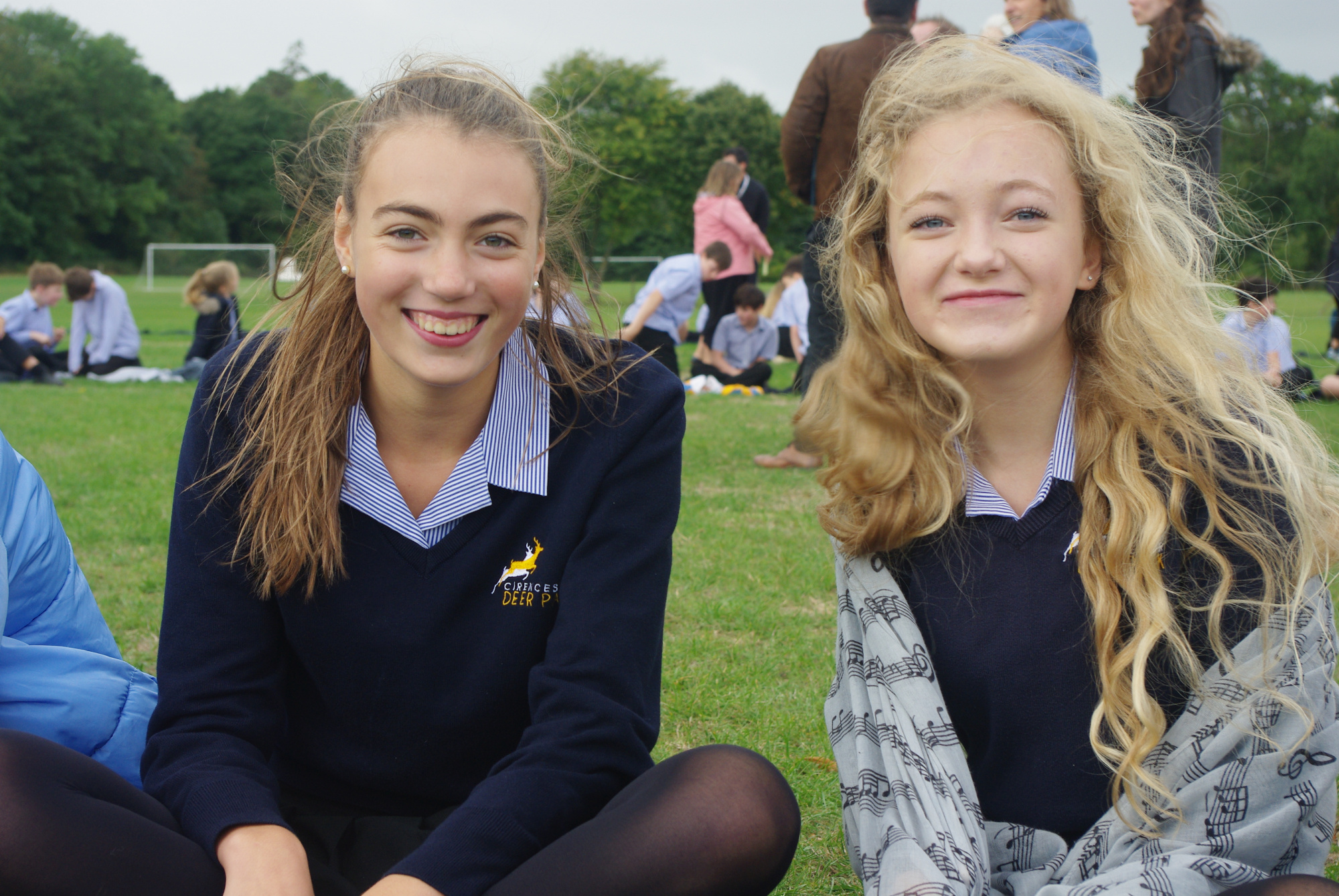 The British weather is famous for being changeable and it did not let us down on the day! Just as the pupils had tied their jumpers and settled themselves on the floor, the heavens opened and we had to make a dash back into the school and Atrium. 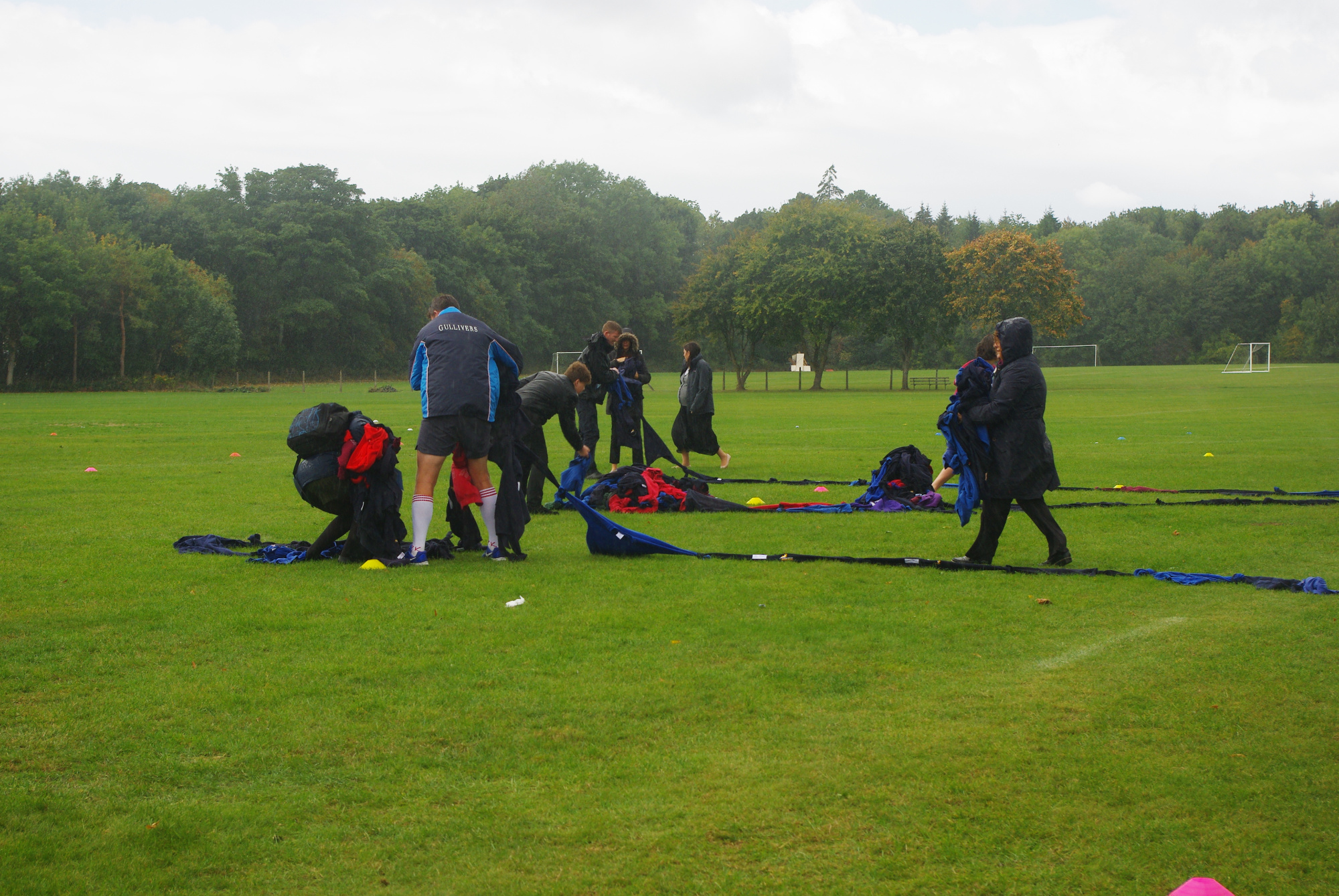 Pupils stepped up by grabbing piles of damp jumpers bigger than themselves to take into the Sports Hall. Once there, the tying together of the jumpers continued and a continuous chain of jumpers (just shy of 1 mile) zig zagged across the Sports Hall and over into the Gym. The counting and measuring began with Robert Hamilton counting the links and measuring the distance with his Trumeter, all under the watchful eye of our witnesses Melanie and Hannah. 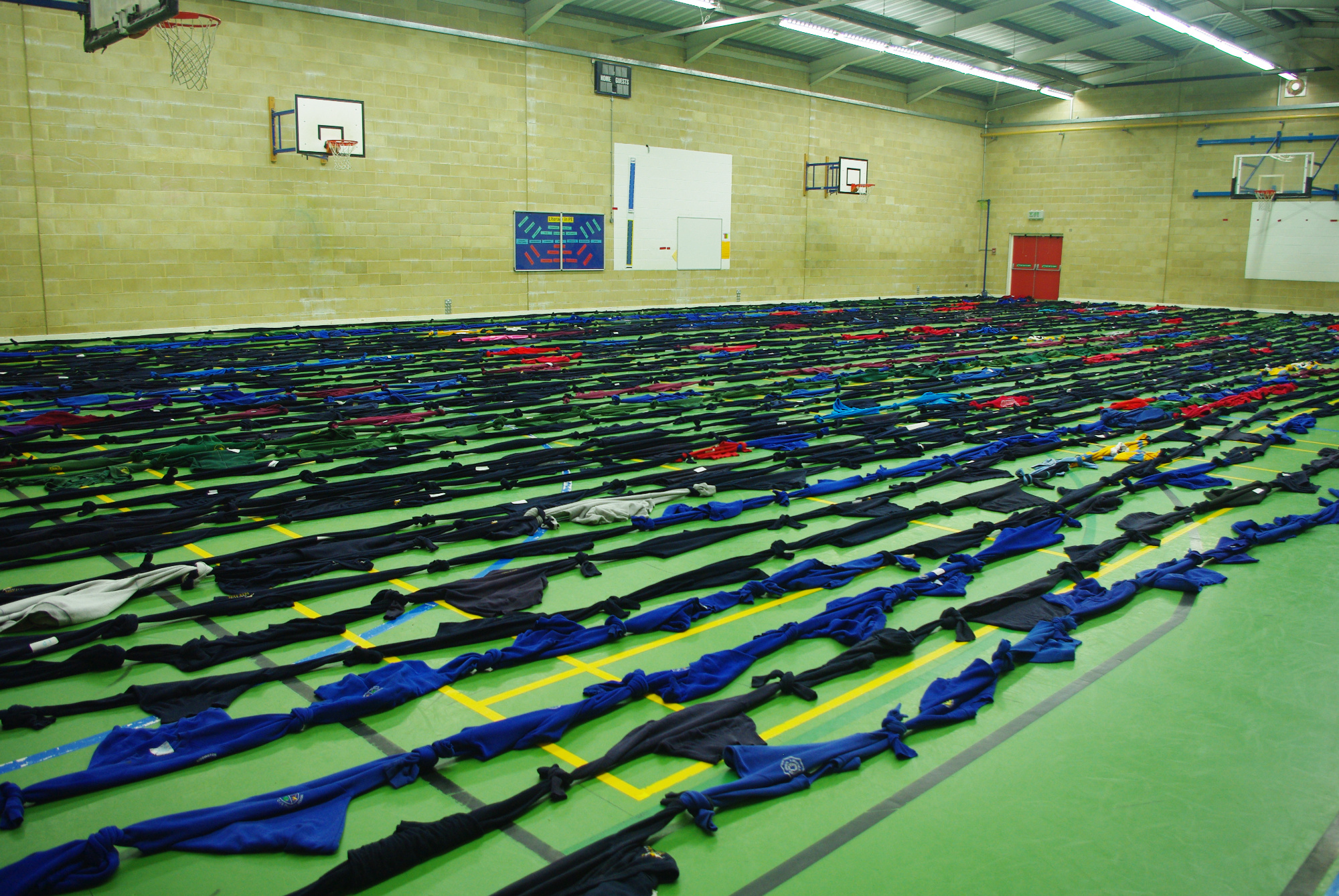 The final count was an astonishing 1,570 jumpers and 1,491m - the record had been smashed! 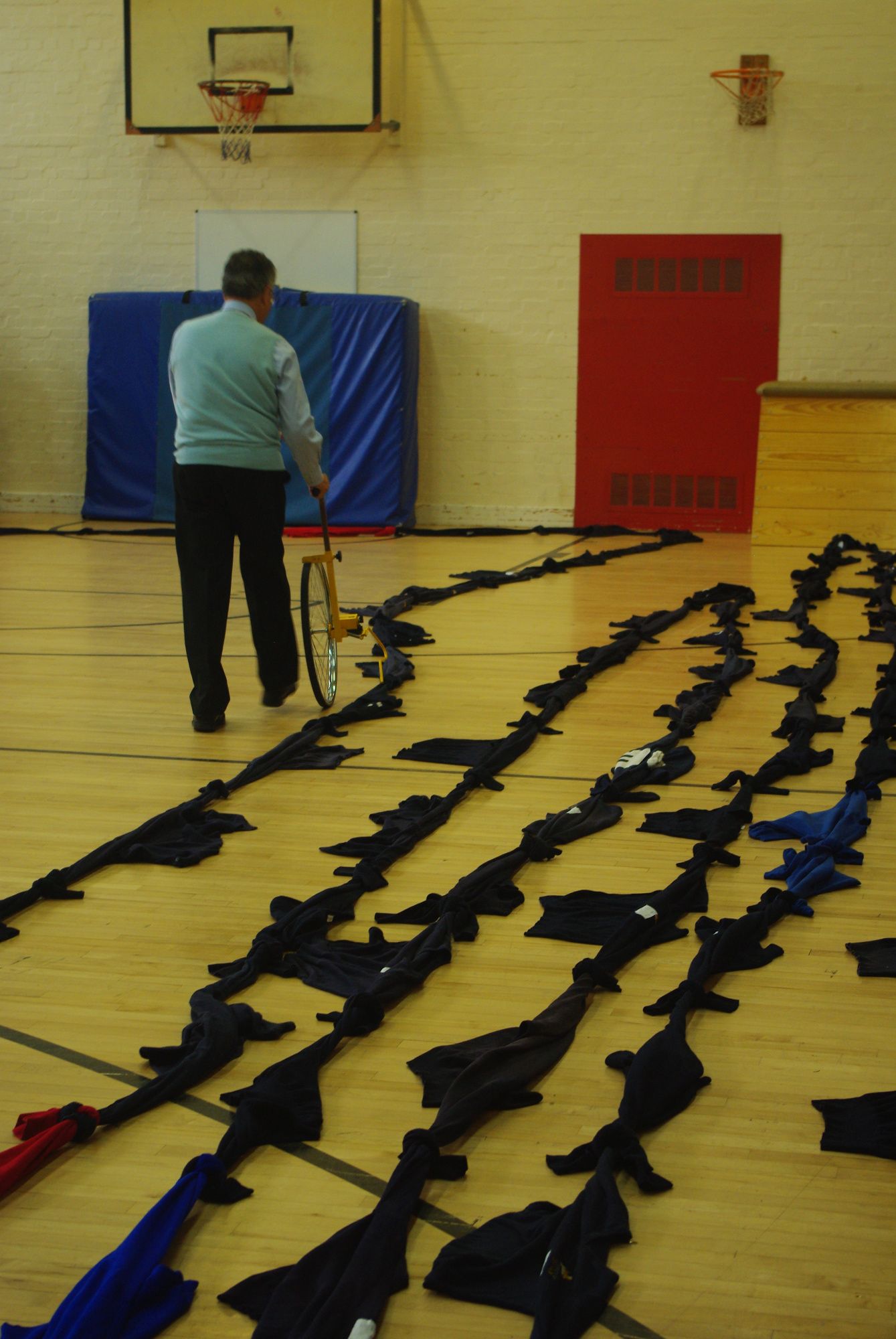 However, there was still work to be done as over 1,100 pupils had to be reunited with their jumpers! Chloe commented: "The world record attempt was a massive success, although it would have been nicer if it hadn't rained!"

"A fantastic example of reciprocity! I am immensely proud of how the Ghana 2019 team worked together on the day and in the build up to the event. Everyone got stuck in, supported each other and showed initiative - what a great foundation to build their volunteering experience on next year. A huge thanks to all the staff involved in the day too, both their organisation of pupils on the field and also in giving up their free time to help with the the jumper tying and count made the event possible." Miss Lillington, Ghana 2019 Trip Leader

The paperwork and video evidence will now be collated and then sent away for verification by the team at Guinness World Records; this process normally takes about 6 weeks, so listen out for further news on whether the Corinium Education Trust are officially record breakers! 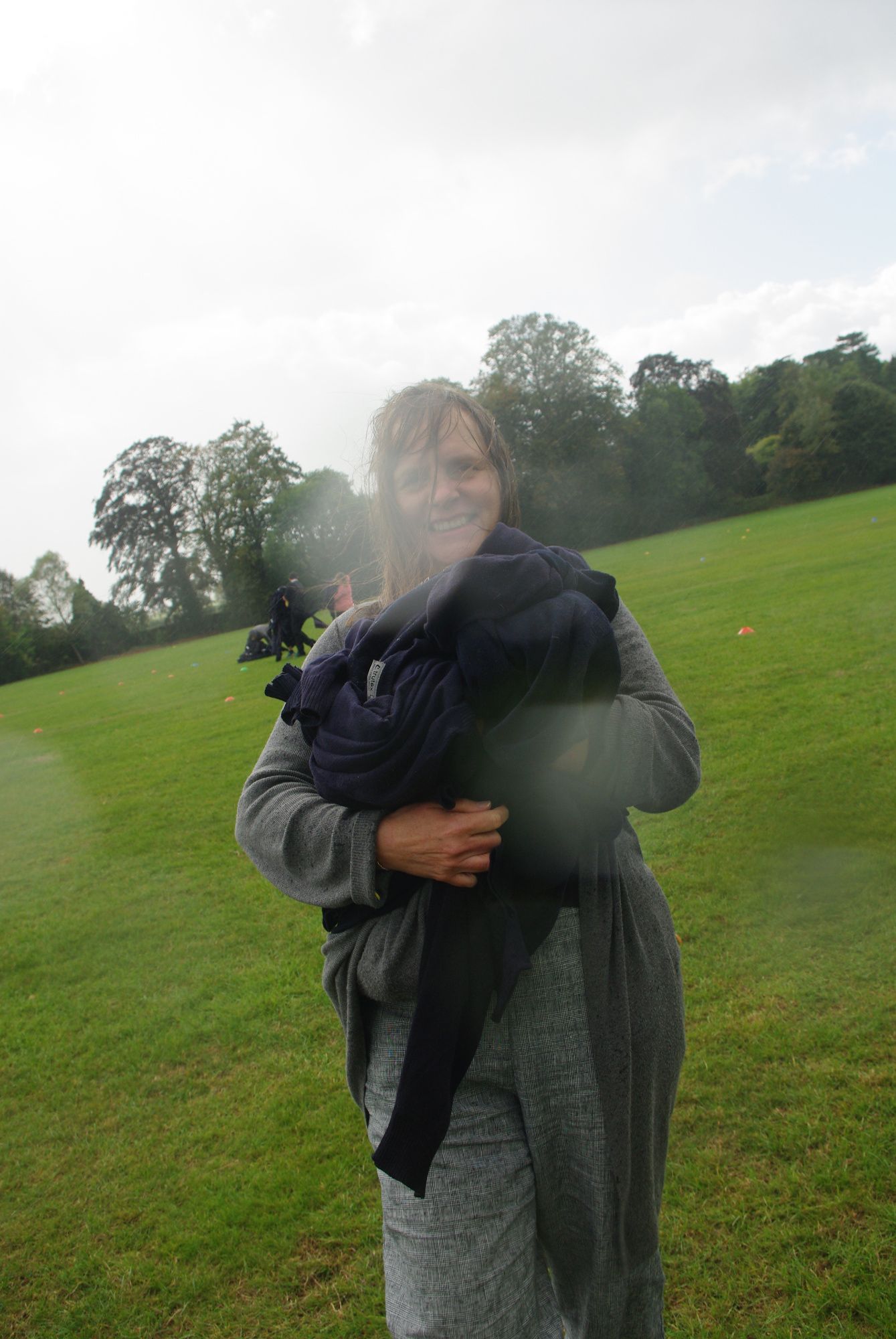 ​"I am extremely grateful to all staff and pupils for the way in which they came together and supported this ambitious project in aid of our Ghana 2019 team’s fundraising. I was delighted we were able to tie our school jumpers together to spell out ‘#World Peace Day’ on the field before the rain came. It was definitely a symbol of harmony and a testimony to our close collaboration reflecting the theme of our standstill day. After our dash in from the sudden shower, the recreation of the final school jumper chain required team work and watching the surveyor measure and count the jumpers with the external witnesses was very tense! I am very proud of our achievement and look forward to hearing whether or not we broke the world record!" Chiquita Henson, CEO Corinium Education Trust and Headteacher Cirencester Deer Park School

One of our independent verifiers, Hannah, commented: "Congratulations to you all for smashing the current world record and organising such a wonderful event which i'm sure the students will remember forever."