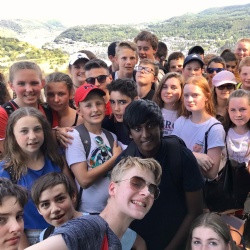 by Mr Morgan, Teacher of English

With the clock just striking midnight on a Sunday/Monday, it would be normal to expect Cirencester Deer Park School to be akin to that of a ghost town. However, Enrichment Week (2-6 July 2108) is no normal time and, as such, the front of school was filled with the buzz and chatter of 43 excited (new) Year 9 pupils eager to board their coach. The destination? Germany and the small town of Bacharach situated on the Rhine.

Our home for the week was Burg Stahleck; a castle-turned-hostel that provided stunning views over the vineyard-littered valleys surrounding us. With many of the pupils sleeping in a medieval tower, it was easy to forget that this was 2018.

As the dawn rays of sun flooded the castle courtyard, our group was up and busy packing their lunch for the day ahead. 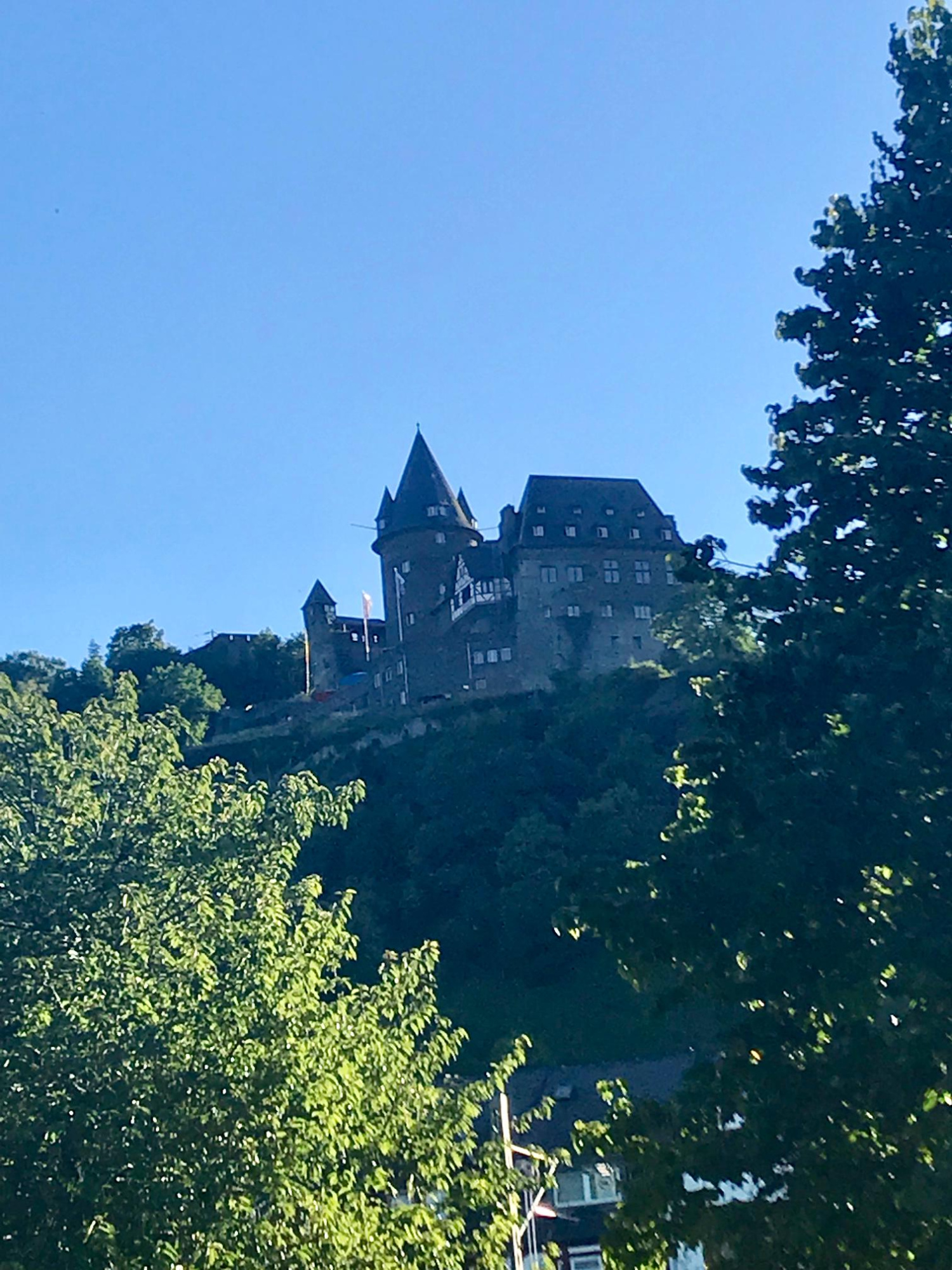 The first stop was Koblenz, where we were immediately astounded by the imposing monument to William the Great jutting out on the Deutsches Eck, at this spot where the Mosel meets the Rhein. 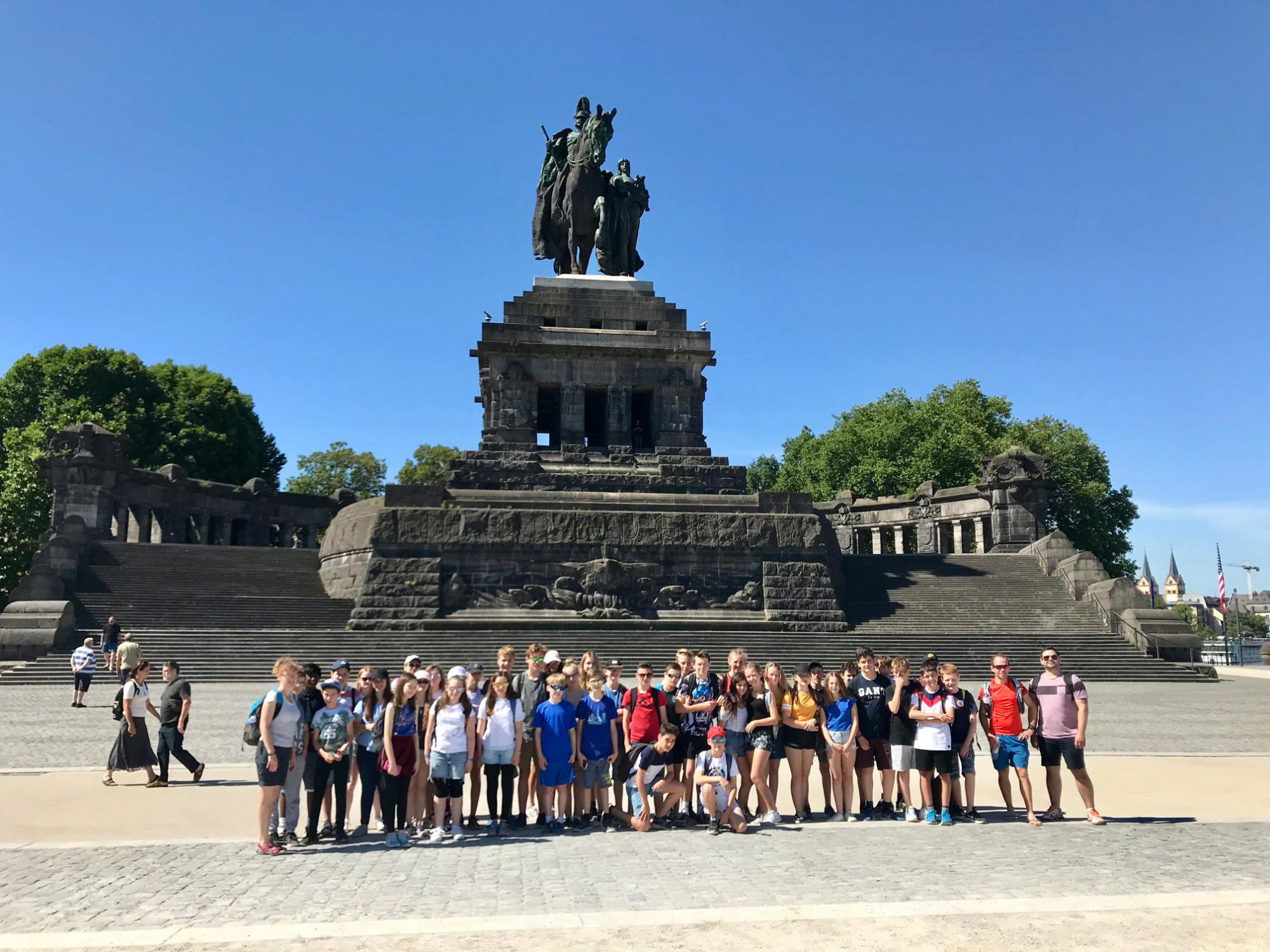 Pupils were given one task before being allowed to roam the area freely: to converse with the locals in German. Judging by the number of souvenirs that were amassed, it was easy to conclude that the Languages Faculty have been doing a sterling job this year.

Next we were off to Marksburg Castle, where pupils were treated to a guided tour looking at Germany’s defences throughout the ages; many were fascinated to learn about the dungeons and the various punishments used back then. Finally, with the 32 degree heat beating down upon them, the group was allowed to explore the town of Boppard, before embarking on a picturesque cable car ride. Being their first opportunity to relax during the scorching hot day, many pupils enjoyed the tranquillity, with one girl even overcoming her fear of heights in the process! 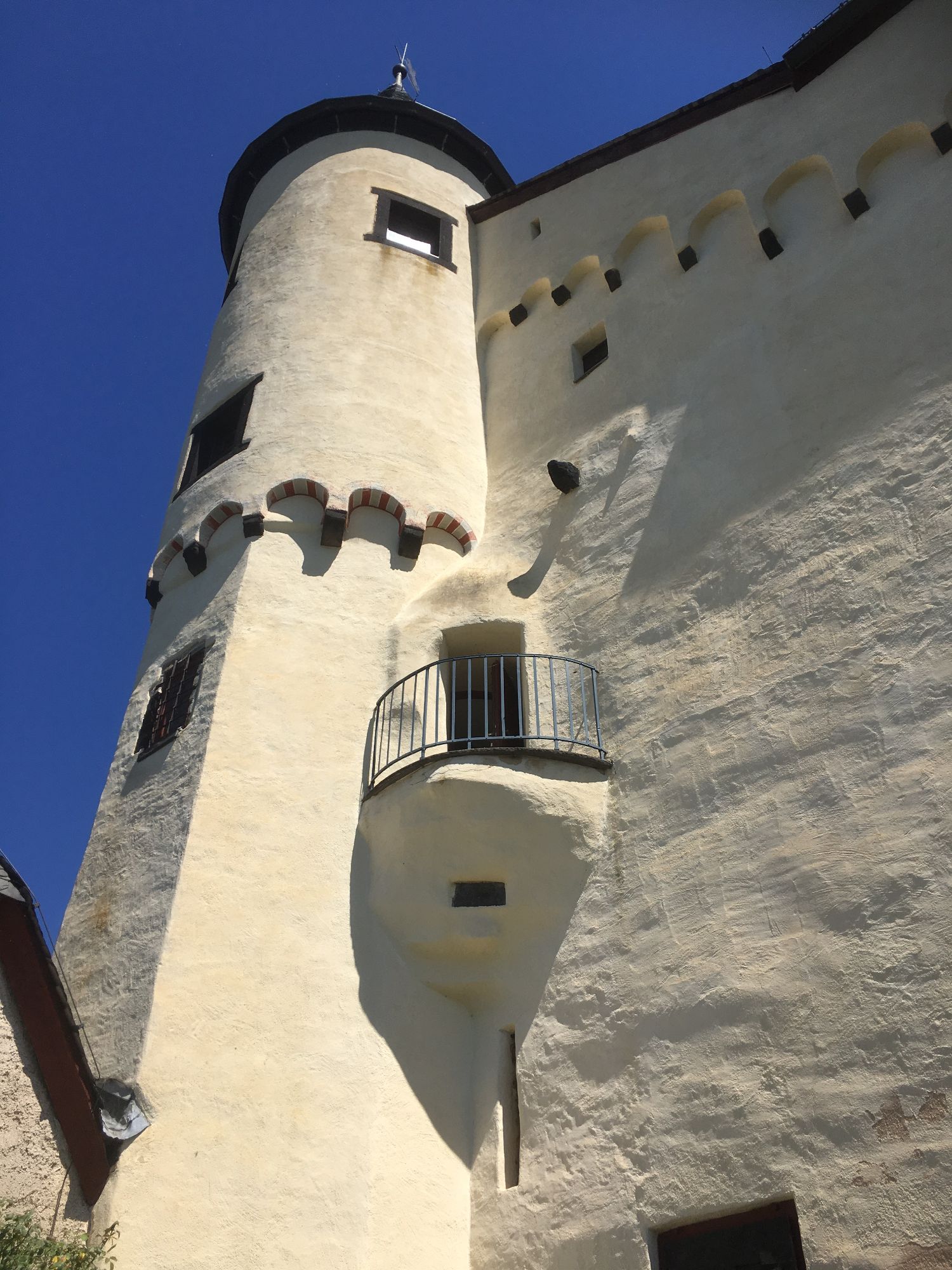 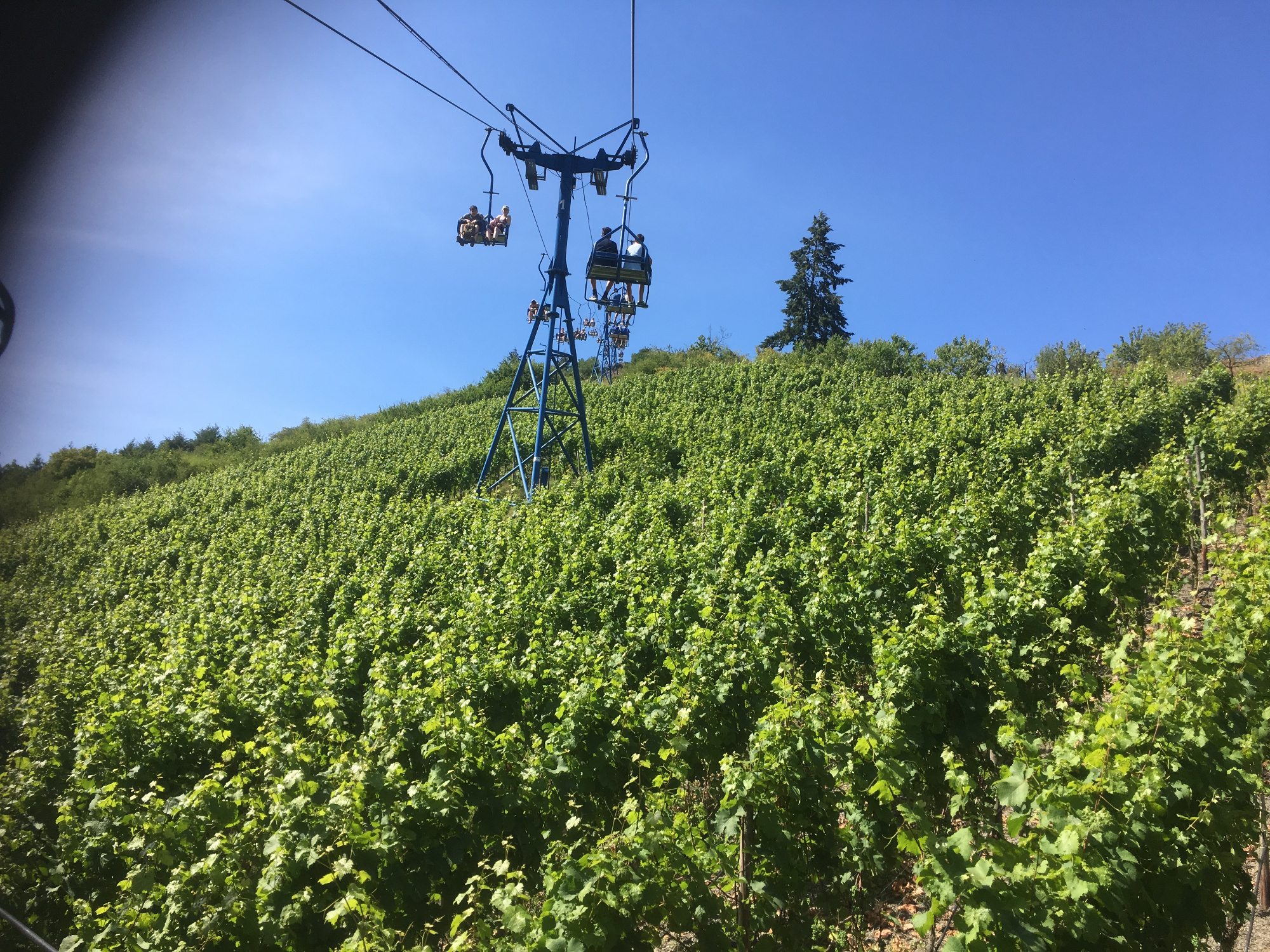 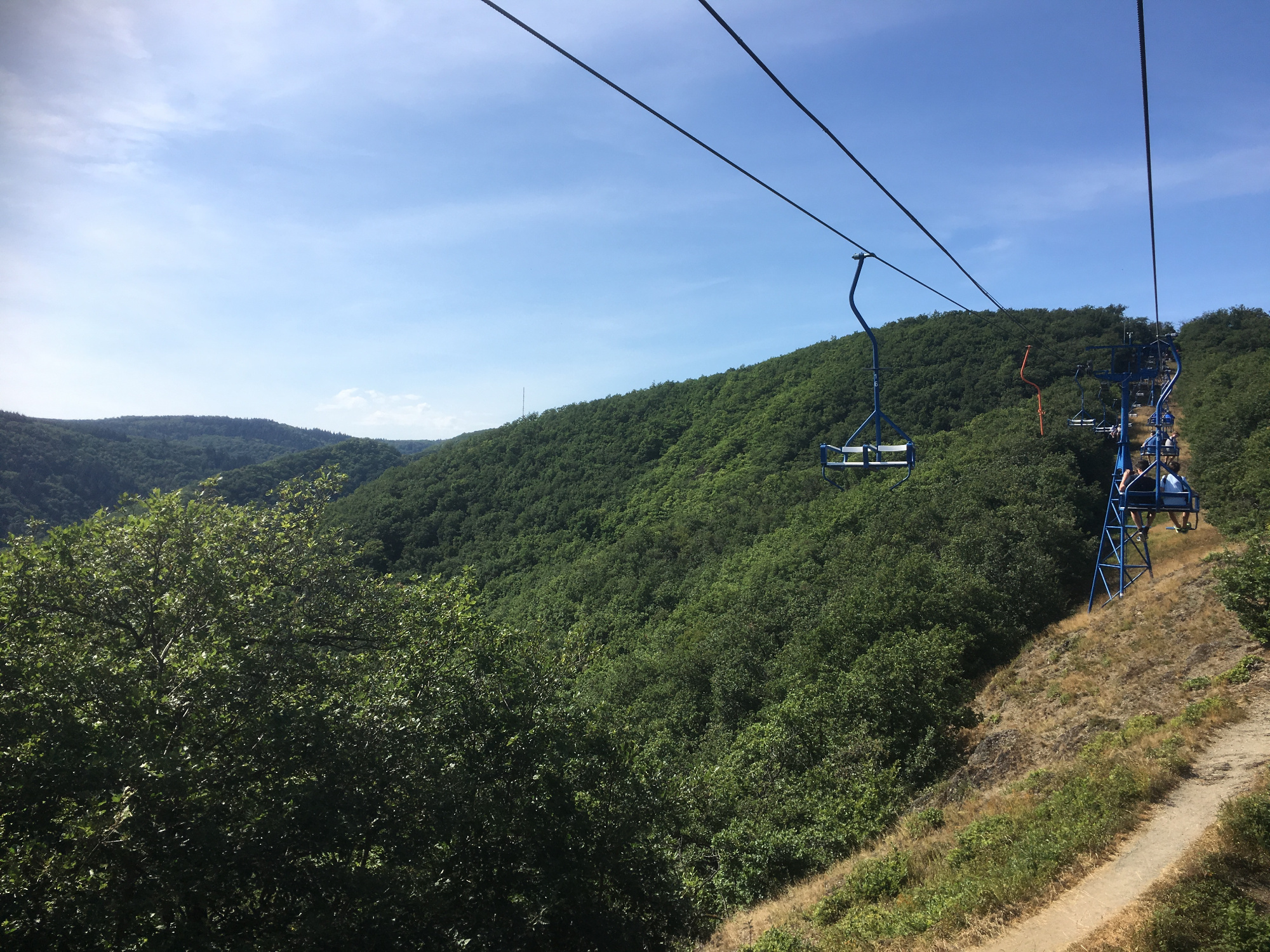 The evenings were action-packed, with pupils being taken down to a local park to play some games to finish off the days. Rounders quickly established itself as a popular choice with a 3-day running tournament which had the majority of pupils, staff and even Tony, our coach driver, getting involved in the action. If that was not enough to prepare the pupils for Sports Day (11 July), then the twice daily descent from and climb to the castle certainly would. Mrs Pennington, living up to her role as Head of Maths Faculty, counted 368 steps, although this teacher can testify that it easily felt like twice as much! 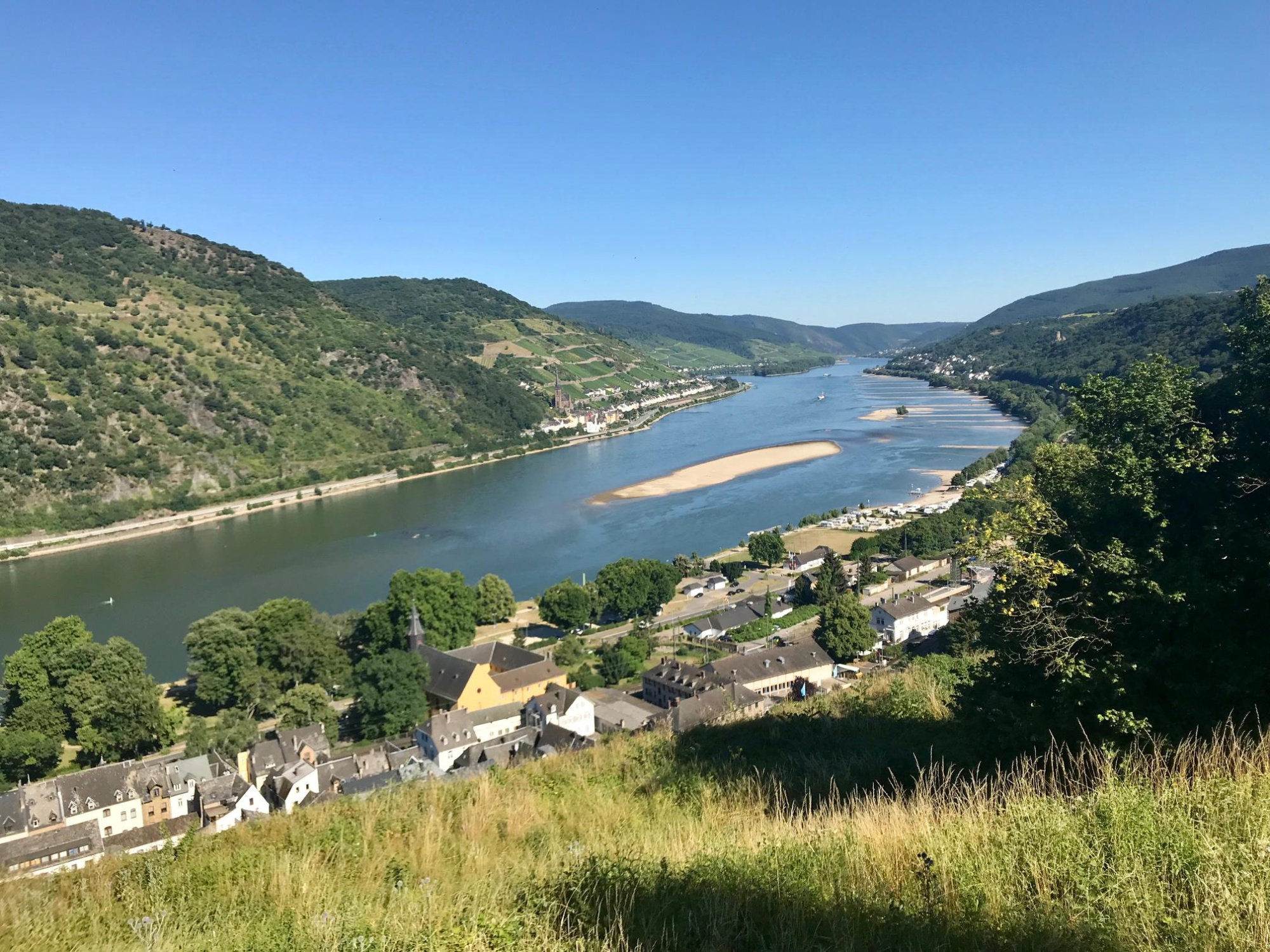 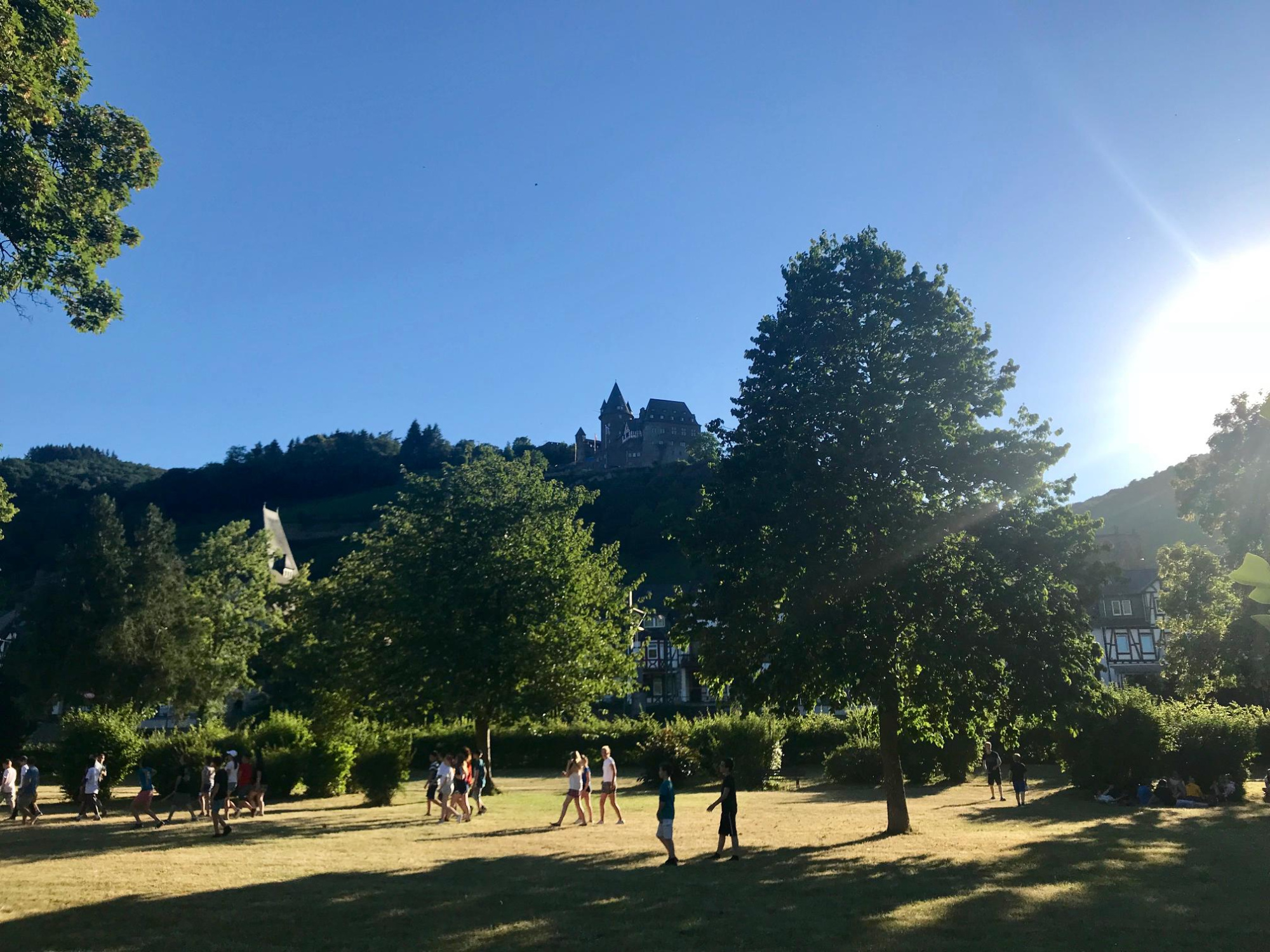 The next day we visited the J.Koll & Cie Winery which, at 68 degrees, has Germany’s steepest vineyard. Pupils learnt all about the fermentation process and how the wine is stored. There were also some tasting lessons - worry not, this was tasting of grape juice not wine! The day ended with a visit to Rüdesheim before embarking on a cruise up the Rhine back to our hostel. The pupils were particularly excited for this as it was the night of the England-Croatia game and Trip Leader Mrs Lang was kind enough to allow them to stay up and watch it. I’m sure I don’t need to tell you how that went… 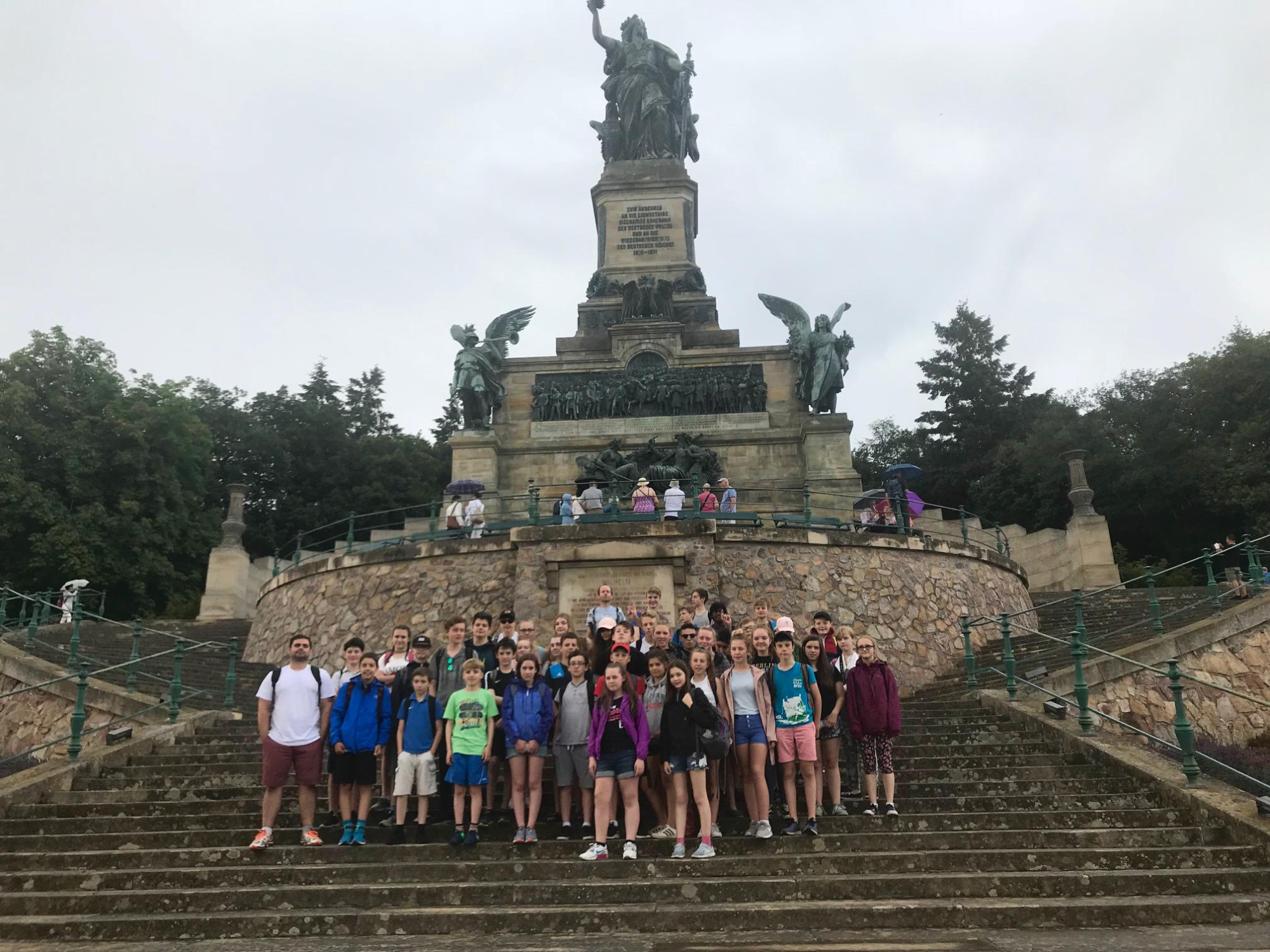 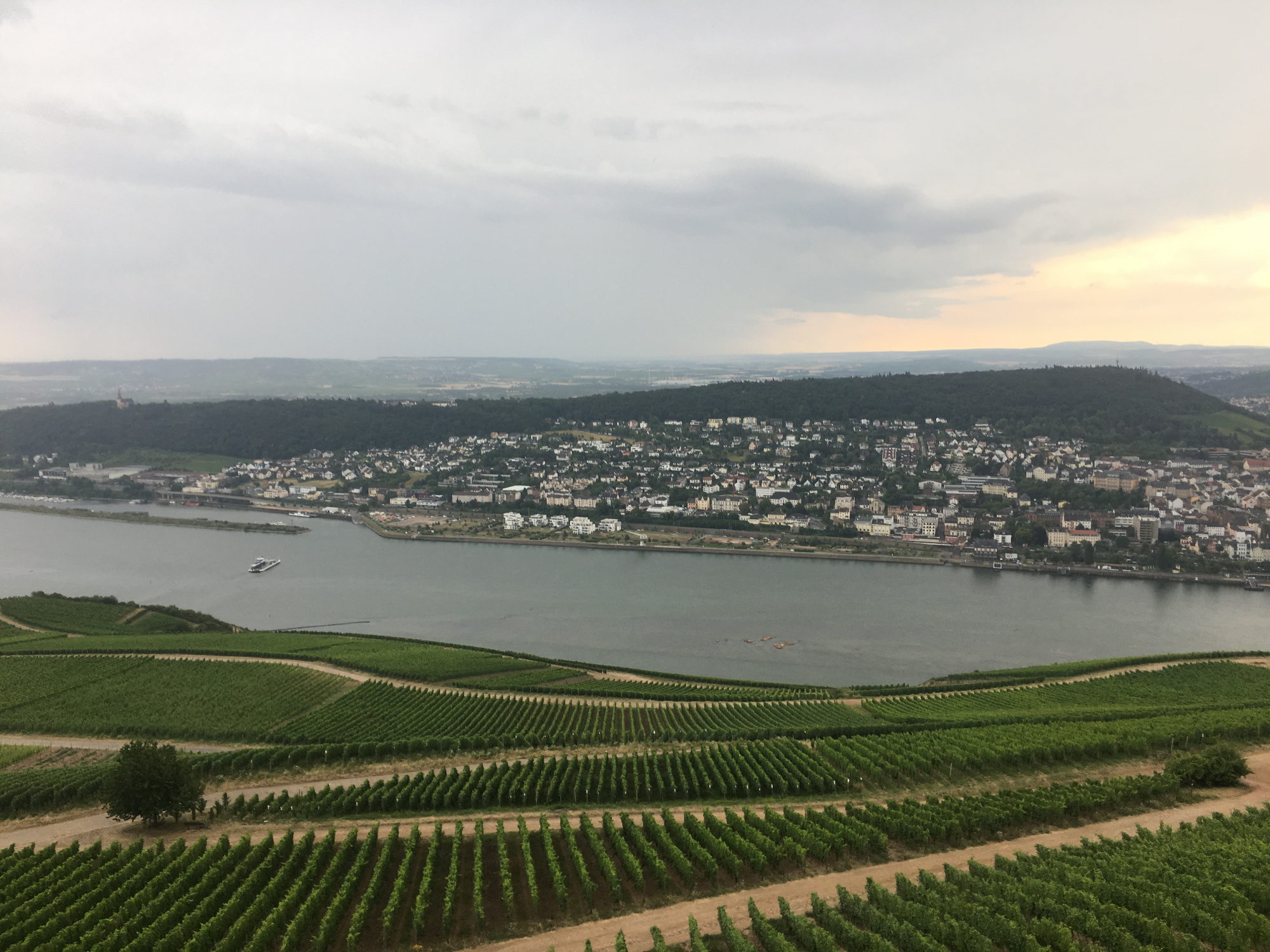 Our final day had just one activity planned: PhantasiaLand, Germany’s most popular theme park. The pupils were eager to explore and go on as many rides as possible, although possibly none quite so keen as Mr Morgan and Mr Carmichael, who disappeared in a puff of smoke the millisecond Mrs Lang said they could go. Many pupils confessed to having never been on a rollercoaster; Jaden and Liv decided to start on a high point by going on Europe’s fastest multi launch rollercoaster, Taron. ‘That was amazing!’ shouted Jaden afterwards with windswept tears running down his face. 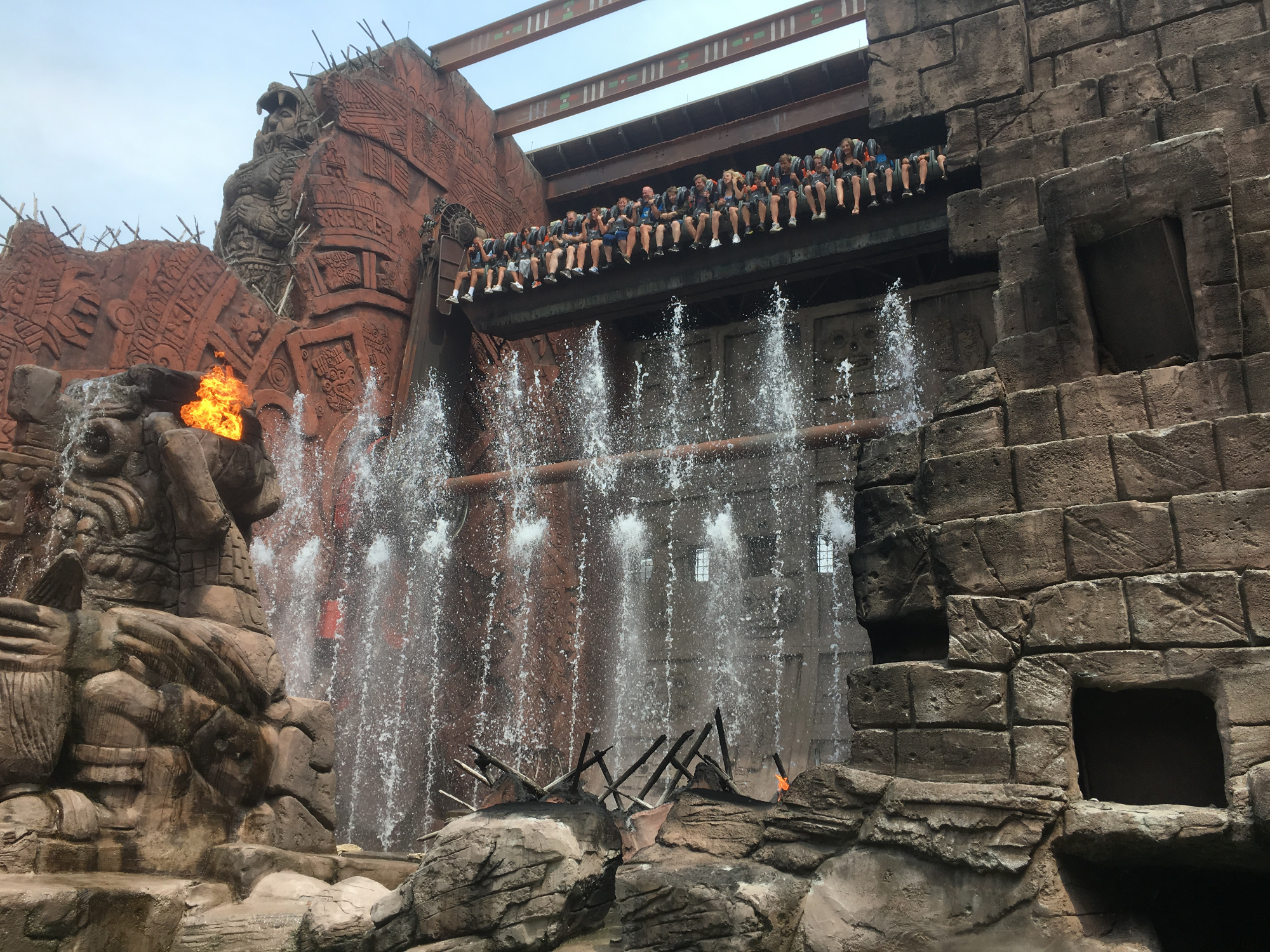 Despite a 15 hour coach ride back home the next day the pupils were in high spirits as they recounted their various adventures from the week. I was struck by how there had been no complaints about the early mornings or the vast numbers of stairs climbed. All the staff agreed that our pupils had excelled and truly displayed the high standard of behaviour that we come to expect of them here at Deer Park, it was even remarked upon by some of the locals who were impressed with what they had seen.

All in all, the pupils learnt a lot, had loads of fun and have created memories that they will never forget. Not a bad way to spend a week really is it?

"It has been an amazing experience and a great adventure." Oliver P

"We had such good teachers with us." Theo R

"The trip was fun." Coral N

During our stay in Bacharach, pupils were given the task of completing a booklet about their time in Germany. Studiously, they answered some quiz questions, filled in diary entries for the week and explained what they had learned about Germany during their Enrichment Week. The pupils produced some amazing booklets, so it was extremely difficult to choose a winning booklet and four runner up booklets. We are pleased to announce the following pupils have a prize: the winner is Jasmine and our 4 runners up are Elodie, Jaden, Kadie and Hugh. Well done everyone!