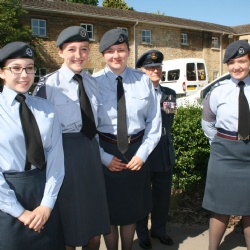 On Monday 25 June 2018, Cotswold District Council hosted a flag raising ceremony in Cirencester to commemorate Armed Forces Day. Four of our pupils who are military cadets attended the event at the Trinity Road offices of CDC, together with representatives of the British Legion, South Cerney-based 29 Regt, Royal Logistic Corps, the Royal Gloucestershire Hussars Squadron (Royal Wessex Yeomanry), the public, and members and staff from the Council.

Mrs Stubbs, Senior Year Leader, who went to the ceremony said "Cirencester Deer Park School is very proud of all our cadet pupils and thank those in particular who attended the flag raising ceremony. We are honoured to attend this significant annual event hosted by Cotswold District Council and this year is particularly poignant because many people at home and abroad will soon be commemorating the 100th anniversary of the end of the First World War."

"The girls looked so smart in their uniforms and were proud to represent both the school and their regiment at this important community event. As a school we are committed to supporting our  endeavours outside of school and it is important that we show our respect and gratitude to those who serve our country in the armed forces." Ms Henson, Headteacher

"It was a really good experience.  It was very nerve wracking at first because there were so many people but I felt honoured to be part of such an important event. It was really nice to be in the presence of actual serving officers and reservists.  Everyone was very appreciative and lovely to talk to. I feel like everyone did an amazing job and I felt so proud to be representing not only my unit but also Cirencester Deer Park School." Holly, Air Cadet in (new) Year 11

"I was honoured to take part in the flag raising ceremony to celebrate Armed Forces Day. I was proud to represent both 1245 Cirencester Air Cadet Squadron and Cirencester Deer Park School at this prestigious event." Ella, Air Cadet in (new) Year 11

2018 is particularly poignant for everyone as it marks the 100th anniversary of the end of the First World War, described by HG Wells as 'the war to end wars'. Armistice Day on 11 November marks the day that the armistice was signed between the Allies and Germany, bringing an end to hostilities on the Western Front, at the eleventh hour of the eleventh day of the eleventh month, in 1918. Remembrance Day, commemorating members of the armed forces who have died in active duty in all conflicts over the last century, also takes place on Sunday 11 November this year.

At Deer Park on Friday 9 November, we will be commemorating this important event by holding a whole school 2 minutes silence during a commemoration ceremony. This is an important opportunity for our pupils to reflect on the loss of men and women to violent conflict over the last century, to remember relatives that may have been affected by war and to reflect on how to make the world a more peaceful place over the next 100 years.

When pupils join us in Year 7 they study the very moving Michael Morpurgo book 'Private Peaceful' in their English lessons. These pupils are then offered the opportunity to travel to Belgium the following May, to gain a better understanding of the background to the book and to the sacrifices that so many young people made during 1914-1918. Read Private Peaceful Trip 2018...

Armed Forces Day takes place on the last Saturday of June, which this year is Saturday 30 June; the national event will be held in Llandudno, North Wales. The day is a chance to show support for the men and women who make up the Armed Forces community: from currently serving troops to Service families, veterans and cadets. Find out more...