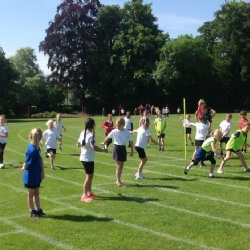 “All the schools were amazing, they took part really well and they all showed good sportsmanship.” Deer Park Young Leader

“I have been to this event 3 times and this one has to be by far the best and most well run one.” Primary school teacher

The events were brilliant, ranging from speed bounce to skipping. We had 50m and 600m running, skipping and relay, throwing, speed bounce, triple jump and long jump.

It was a fun, jam-packed three hours for the Young Leaders and Games Captains who did an outstanding job. Not to mention Mr Cummings, who was fantastic!

“The Deer Park pupils were really nice and encouraging whilst I was running. One even ran beside me all the way!” Kemble pupil

“The atmosphere and cheering really helped me during my race.” Pupil from Powell's

Our next primary schools event is the Area Athletics on Tuesday 26 June. Follow our PE Faculty on Twitter: @CDPSsport