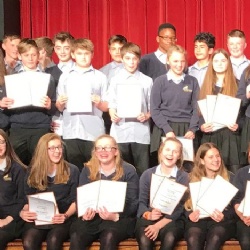 On Thursday 10 May 2018, we celebrated the end of Key Stage 3 with Year 9. It was lovely to see so many pupils and parents at their Key Stage 3 Celebration of Achievement Evening, before they move into Key Stage 4 and embark on their GCSEs courses after the May half term.

Over 80% of the year group were nominated for Faculty awards. As mentioned by Mr Bellamy, Pastoral Team Leader, that evening, being nominated for a Faculty award means being recognised as in the top 4% for attainment, effort or progress. We also recognised the extra commitment that some pupils make to the school through roles such as School Council, Sports Young Leaders and the Tech Team.

There were some fantastic awards for 100% Attendance and never have so many pupils been recognised. Two pupils, Mia B and Jessica O, were recognised for their outstanding 100% attendance over 3 years of being at Deer Park. The Headteacher's Award was given to Tanwen B and Tui R for their outstanding contribution to school and academic achievement.

A special thank you to Molly S for such a stunning performance on the evening, singing to her year group. Our thanks too to our guest and former pupil, Alex Olodade, for her inspirational words and we hope this has triggered a sense of achievement and resilience with the pupils, as they face the next stage in their journey.

It was a joy to see so many pupils receive awards for different reasons and to feel the warmth and support they showed for each other during the evening. I congratulate all who were nominated in each category and across all subjects and highly commend them on the qualities have shown us as developing learners, emerging leaders and good citizens within our school community

Miss Mulcahy, Head of Expressive Arts, commented: "It is not an easy task to get up and perform in front of lots of people, and as a year group, you have shown a strong interest in just that. You have demonstrated some extraordinary talent over the last 3 years, and as a Faculty, we have been really impressed by your enthusiasm. We think this year group are a credit to the school."

Mrs Hacker, Head of PE, said: "To be successful in PE you need to develop good team work, co-operation, resilience, communication, creativity, and ability to abide by the rules. These life skills have been demonstrated continuously by this year group. You have been great in terms of your attitude, enthusiasm and ability and it has been lovely to see you grow and develop over the past 3 years."