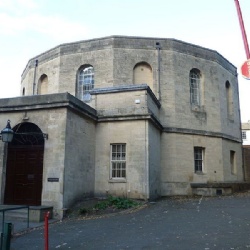 On Friday 27 April 2018, twelve pupils from our Year 11 GCSE Citizenship Studies class went to Gloucester Crown Court to watch a court session in action as part of the Getting Court programme initiated by the High Sheriff of Gloucestershire.

The pupils were taken into Court 2 where the Court Usher, Ian, shared the history of Gloucester Crown Court and explained that some defendants bring a suitcase to court because they are likely to be taken immediately to prison. The Court is an impressive Grade II listed building, dating back to 1816. Until recently it had a close link to Gloucester Prison but that obviously ended when the prison was closed in 2013 under “reform” by Chris Grayling, the Conservative Justice Secretary. We could not tour the court cells in the basement as they were being used to hold defendants.

Judge Cook from Taunton outlined the types of cases that the pupils would be witnessing.

The first case was a young person making an appeal against his punishment and he represented himself in court. The next case involving an appeal on the grounds of health, with a video link to a prison. The pupils heard witness statements in another case. At midday we went into Court 1 to listen to a presentation by Fuzz Asghar, senior mentor from Great Expectations - this intervention programme is aimed at preventing young people from making decisions that may have a negative impact on their future. Fuzz talked to our pupils about his experience of life in prison and the impact that it has on the individual and their families. Finally, pupils engaged in a very useful Q&A with the judge.

The morning proved to be a valuable revision session in preparation for their upcoming GCSE Citizenship Studies exams.

Courtnay: ‘I really enjoyed my time at the court; it helped me to understand the way it works. More importantly, it made me think about society today and how we should thinking very carefully about our actions.’

Libby: ‘The court visit has been very helpful as it gave me a  greater understanding of the different type of trials that take place in a crown court.’