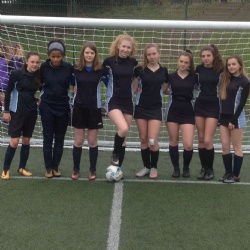 The Under 16 Girls Football team have had a excellent season this year, finishing 3rd in their group in the Gloucestershire County finals tournament.

The team qualified for the County final by finishing 3rd in the Stroud and Cotswold District League tournament at Rednock School on Wednesday 21 March 2018. They improved game by game during the tournament as they got used to the structure of playing 7-a-side. They demonstrated particularly strong defending, combined with good passing in attack. Their results during the District tournament included a 1-0 victory against Stroud High School for Girls, 0-0 draws against Rednock and Maidenhill Schools, a 1-0 loss to KLB School and a 1-0 loss to Thomas Keble School.

The Gloucester County final took place at Rednock School the following day, Thursday 22 March. The girls did not lose a game on the night, showing resilient defending and good attacking skills. Results included a 1-0 win against Five Acres Academy and three 0-0 draws against KLB, Tewkesbury and Churchdown Schools.

Team captain Libberty said she was “proud of the team's efforts because it is the best we have done in four years of playing school football.”

Well done to the following players who have represented the team this season: Libberty, Mia, Charlie, AR, Ella, Eve, Neve, Bo and Emily.