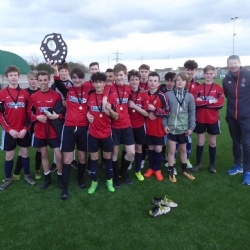 After an injury hit season, the Deer Park Year 10 Football team incredibly beat Marling School 3-2 in the District final on Monday 26 March 2018. A brilliant team performance in an exhilarating match, where we took the lead three times but Marling, to their credit, kept coming back at us.

However, our final goal was the decisive moment -  a brilliant team goal from defence into attack -  and the icing on the cake to a fantastic and fully deserved win against last year's champions. Our team created the more chances, kept the ball superbly and defended as a solid unit. Goals from Ameer (2) and Ben. Man of the match: Dan H.

Ameer led the line with strength, movement and two great finishes. Aaron, Dan D and Freddie worked tirelessly on the wings with great technical quality. Luca's gile and accuracy of passing was second to none. Ben, Sam and Orlando held their shape and discipline in front of the defence way beyond their years. The back four of Lewis, Dan H, Leo and Brad were solid as a rock and showed tremendous unity and leadership, while Reuben demonstrated composure and great handling skills in goal.

Mr Schlaefli, PE Teacher and Year 10 Coach, would like to thank everyone who supported the team and also his substitutes Sonny, Aaron, Oli and Conor who did not play this match. Congratulations to the Year 10 football team and well done too to the captain, Orlando, for leading the team to this victory. They will be playing in the County Quarter Finals after the Easter holidays.

Orlando: "We played like a squad of leaders and I am incredibly proud of every single player in the squad."

Leo: "The team were fully committed in defence and we kept the energy all through to the final whistle, with some wonderful goals."

Sam: "We played brilliantly as a team in attack and defence and thoroughly deserved our win."

Parent: "What an exciting and close match! Football at its best - great teamwork, inspired footwork, resilience, plus high levels of fitness and energy."