On Tuesday 27 February 2018, 44 Year 10 pupils braved the freezing winds and snow to attend a GCSE Science in Action event at the Emmanuel Centre in London.

The well-known speakers included Marty Jopson from the BBC's One Show, Professor Carole Mundell from the University of Bath and BBC Breakfast News and Greg Foot who regularly appears on the BBC and YouTube. Pupils found Greg’s presentation on deep sea diving particularly interesting and engaging and he was able to show them his time on board a submersible, plus footage from the boat he was on during filming of BBC Blue Planet II.

In the middle of the day there was an interesting talk on exam techniques and revision from a retired teacher, with an interesting slant on the top tips to fail!

Science presenter Steve Mould was very enjoyable and pupils enjoyed looking at why nappies don’t leak water back out!

The final speaker of the day, Marty Jopson, was able to show a sonic boom, using a bull whip moving at 3 times the speed of sound, and calculated if he would be able to chop through 3 pieces of pine with his bare hands using the kinetic energy equation, which he then proceeded to do!

The overall feedback from pupils was that they enjoyed the day despite the weather. One pupil even bought Helen Pilcher's book on De-Extinction whilst she was presenting as they were so impressed; he received a tweet from her saying she hoped he would enjoy the read!

Mr David, Assistant Head of Science, commented: “It was a pleasure to take such a polite and well mannered group of students away for the day. They were well behaved and attentive throughout and a credit to the school.” 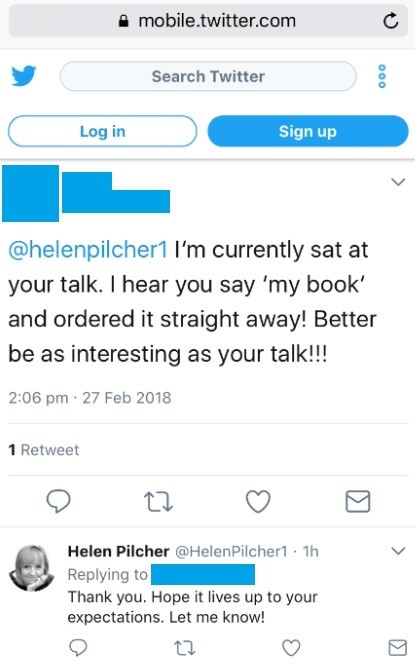 “This gave us new insights into Science outside of the GCSE. The best parts were the polymers and dangerous equations!”