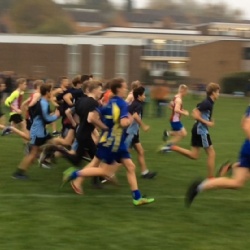 Another week, another cross country race in less than perfect conditions.

There was a feeling of deja vu for our Cross Country team on Wednesday 18 October 2017 - another Wednesday and another cross country race in the rain and mud - see Cross Country (I) for the previous week's report. This time the Deer Park team was at Archway School but this time it was not simply an inter school race, it was the trials for the District team. The top 12 finishers automatically qualify, with the possibility of 4 more to be added after nominations. The course was very hilly and slippy and, in addition to physical fitness, would require mental toughness to battle the hills.

Firstly, we had 5 girls in the Year 7 girls race with Katie E finishing 13th, Beth C 15th, Tamsin H 18th, Carys C 19th and Lily B 22nd. These were results were a massive improvement on the previous week's race and two girls may still qualify.

In the Year 7 boys, Zaak E came 11th, qualifying for the District with a very determind run, and Oliver came in strongly in 27th place. Zaak said “It was a steep course but I feel proud that I made the team.”

In the Junior category, Tanwen B (Year 9) came 14th and will hopefully make the District Team for the race at Newent on 2 December.

In the Year 10 and Year 11 Inters we had a great presence, one of whom was Niamh S (Year 10), who is running her first XC season and finished in a very respectable 18th place. The 5 boys were all feeling the nerves, of either GCSE assesment or the competitiveness between themselves, as well as eyeing up the opponents. I was expecting a good race but never expected what was was to unfold in front of my eyes...

...Each school had brought the best of the best and the Marling and Wycliffe boys (notoriously good runners) were out in force. As they appeared from the trees, Luke P (Year 10) was fighting for 1st place with 100m to go and, with a Mo Farrah style sprint, he won! What an achievement, not just to qualify, but to be the best. Luke said “It was hard, challenging, surprising but rewarding, I'm tired but really happy!" Within 20 seconds of Luke's finish, Ameer C (Year 10) on his debut run sprinted round the corner for 5th place, followed by Luca R (Year 10), also on his cross country debut, in 11th place. All three gained their place on the District Team. Miles A (Year 11) came in 18th and Olly W (Year 11) in 24th. The strength and support for each other in this team of boys was outstanding.

Cross country is a tough sport that can be very lonely and scary, but it shows an athlete's true courage, resilience and strength of character. Each and every one of our runners should be super proud of what they achieved individually today. They made me so proud!