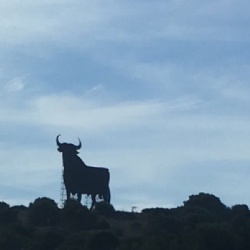 Return leg of Spanish Exchange to Cádiz in September.

"My favourite part of the whole experience was meeting up on the beach after a long day. The days were a lot longer than we'd expected but going to the beach after school was brilliant!" Luca (Year 10)

On Tuesday 26 September 2017, 14 pupils in Year 9 and Year 10 and two members of staff met in Cirencester for an early morning National Express coach to Gatwick, via London Victoria. We flew to Seville - with a delay on arrival after some boys ‘misplaced’ their passports... Ms Wright then found herself carrying lots of passports for ‘safekeeping’! Following a bus journey from Seville, the Spanish families warmly welcomed us to Cádiz and the pupils from England were reunited with their Spanish friends before heading home with their hosts for a very, very late supper before midnight!

The initial leg of the exchange, when the Spanish pupils came to Cirencester in June, helped forge the good relationships between our young people, which was continued via social media over the summer and start of the school term. We were interested to see how our pupils would cope when the tables were turned and they were the ones immersed in another language and culture.

Pupils spent their first full day in Spain, Wednesday, attending 5 one hour lessons at Colegio Argantonio (Cadiz) - school is 8.00am-2.30pm, 6 one hour lessons, with a half an hour break midway - then off to the old part of Cádiz, where we explored the architectural splendour of one of the oldest cities in Western Europe, before walking home for lunch. Later, on the same day, after the siesta, we met up to take a tour of Cádiz, incorporating the cathedral tower (with amazing views), icecream/smoothies (Smooeys), churros con chocolate, and a museum tour to learn the history of Cádiz. The evening, like most, was spent with families and friends. 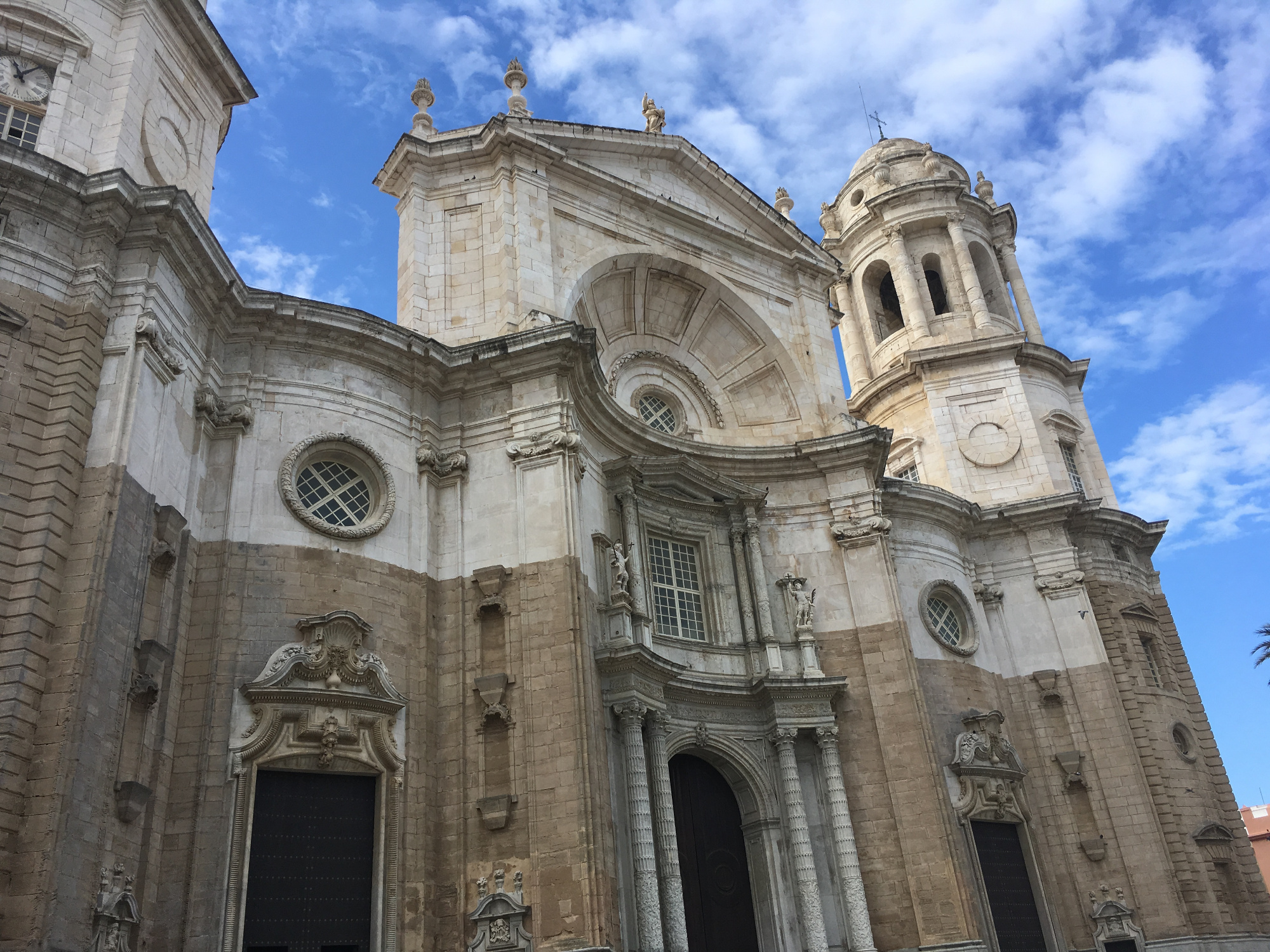 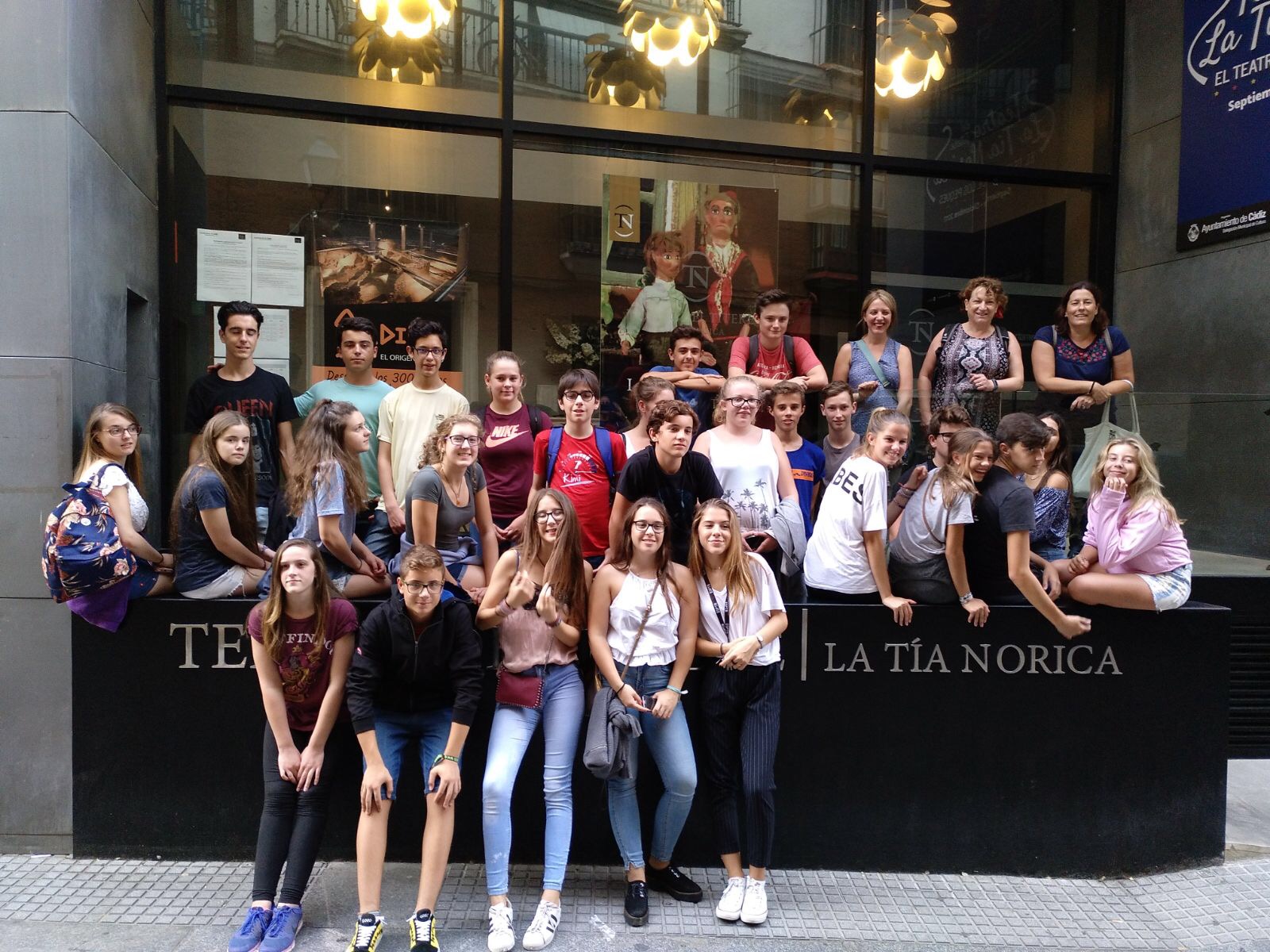 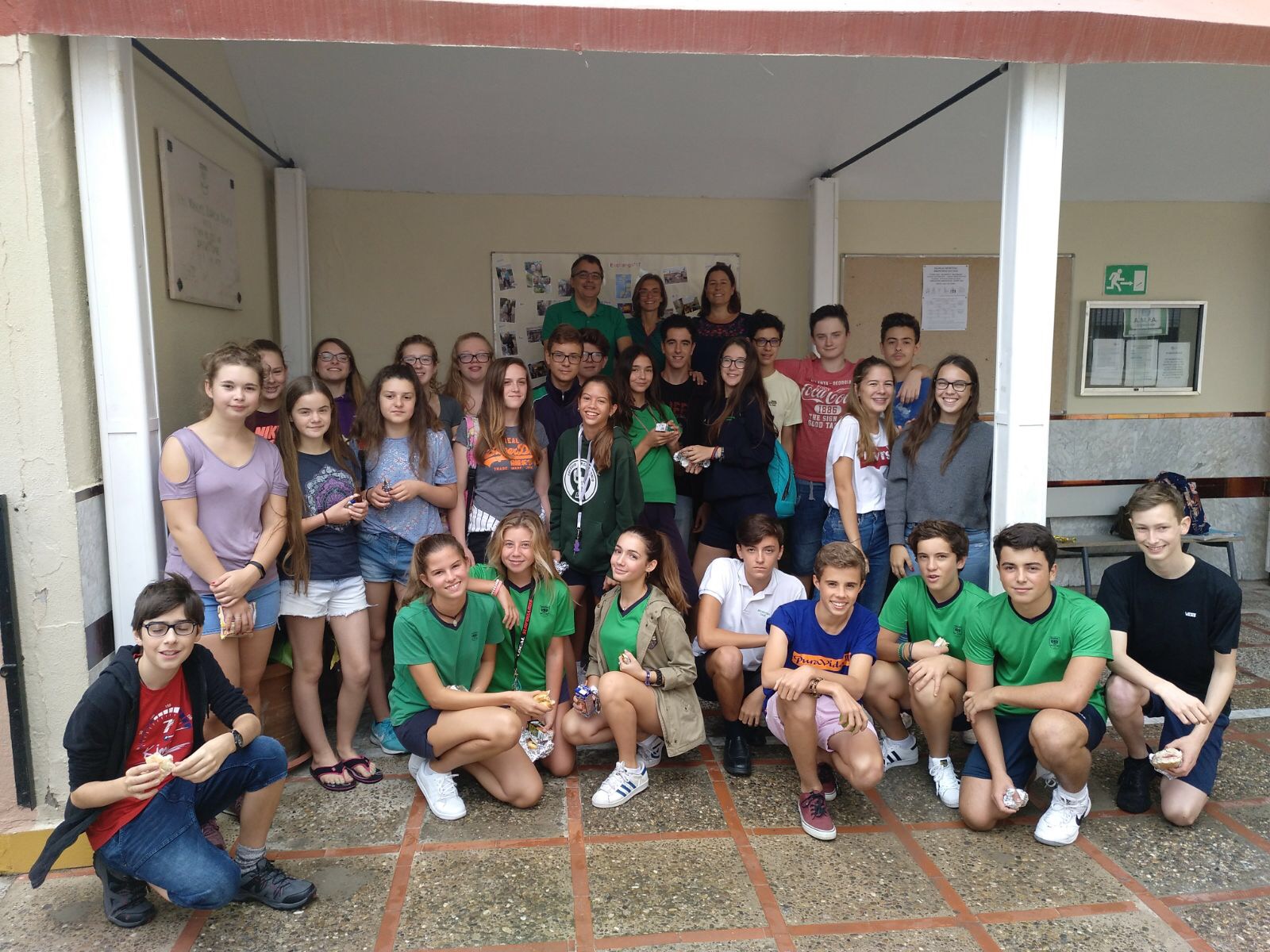 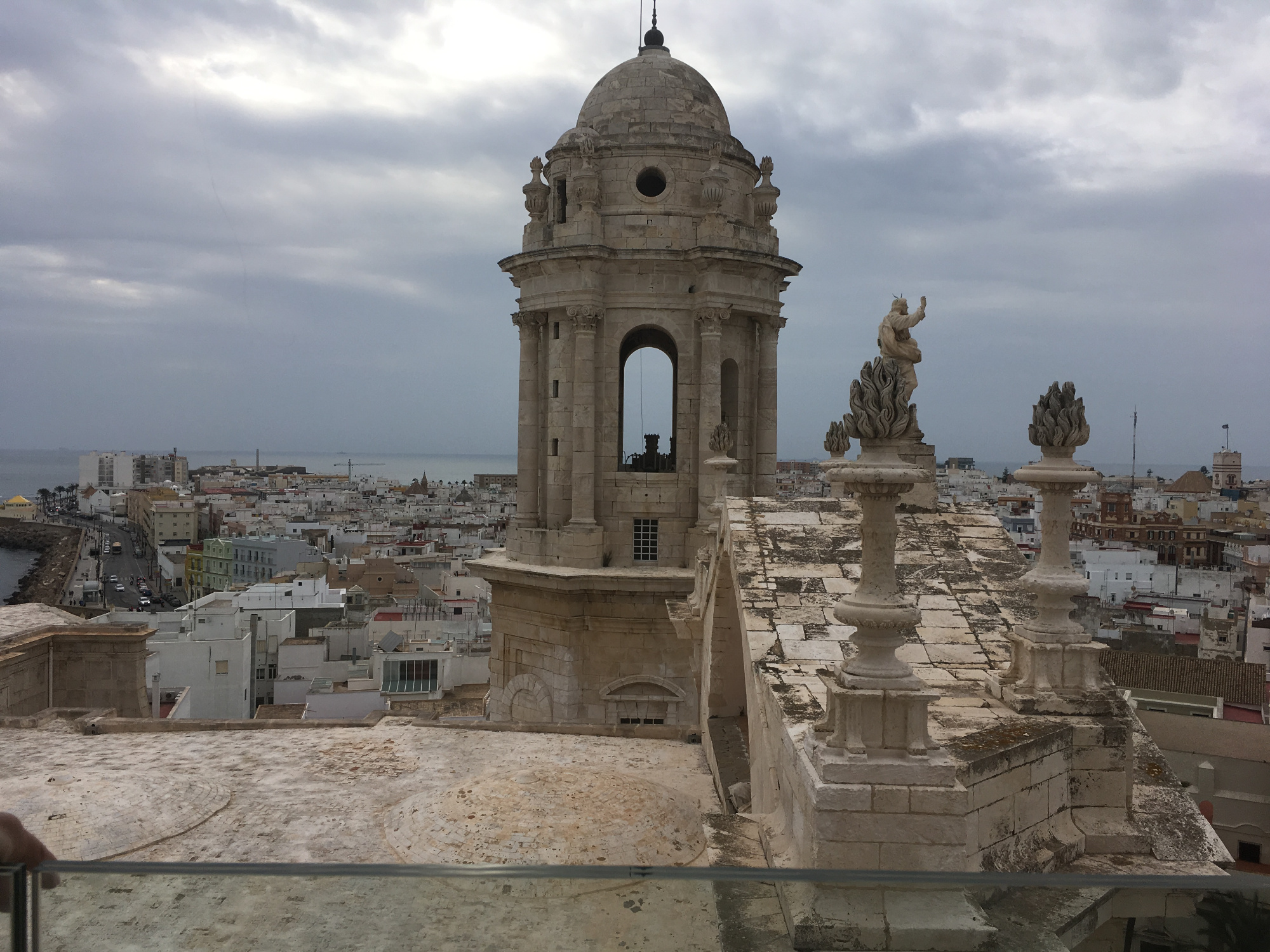 We were in school for Thursday morning, then our pupils took part in a Scavenger Hunt in the city - working in 2 teams, each with either a Spanish guide or Señora Pryor, who had been to Cádiz previously, and Señora Wright, who had not! They had to collect evidence to show they had completed tasks, such as buying fruit or a postcard and stamp plus asking questions, all in Spanish obviously. We met our hosts at lunchtime for a local bus ride to a fish restaurant near one of the beautiful beaches for ‘Pescaito y patatas fritas’. All afternoon we were speaking Spanish and swimming in the sea. 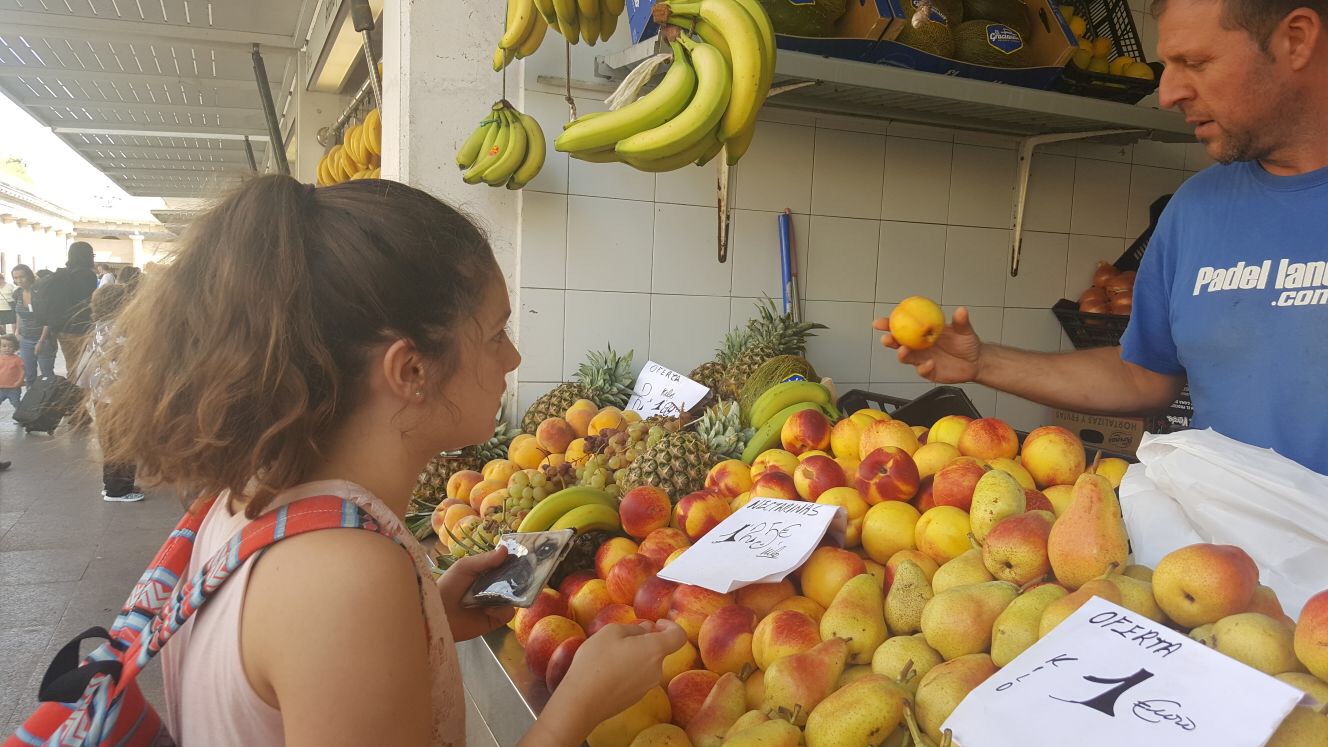 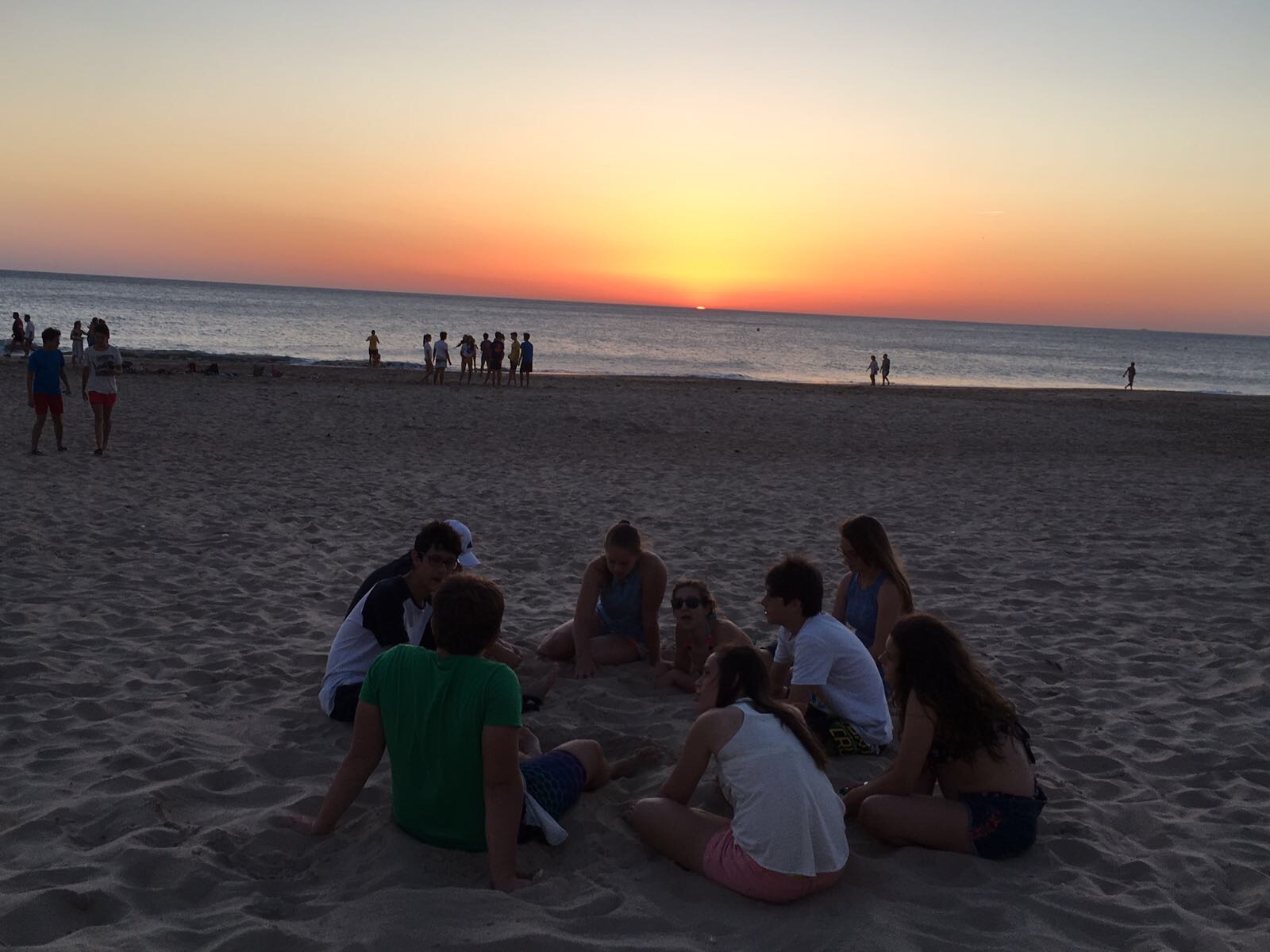 After 2 hours of lessons in school on Friday morning, we went down to the beach to learn to surf. A dry run onshore allowed pupils to get familiar with the technical aspects of surfing, before slapping on the suncream, donning wetsuits and heading into the sea with surfboards. They fell in, of course, but that was part of the fun and the smiles of success, however short or long-lived, were great to see. Later on, pizzas were ordered and delivered to the beach and there was more swimming in the 30 degree heat!

The weekend was designated family time. Saturday involved shopping or being active at a Spanish equivalent of Go Ape, followed by, of course, the beach or the swimming pool at one family's summer house! Lots of socialising as a group and practising Spanish! Sunday morning was time for relaxation followed by a trip for some to Vejer de la Frontera - a little typical Spanish town in the hills. There was lunch at the beach and more swimming in the sea. 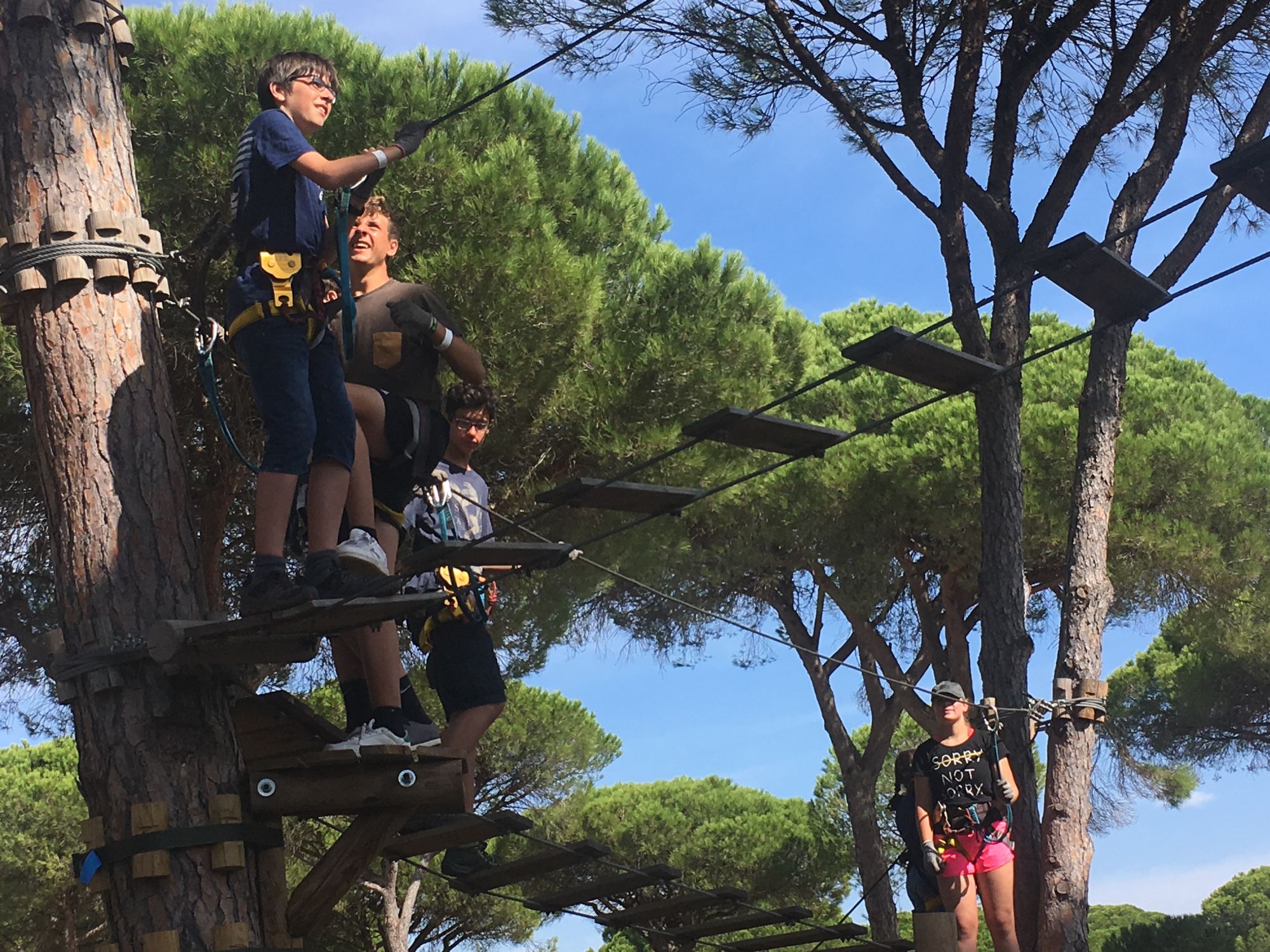 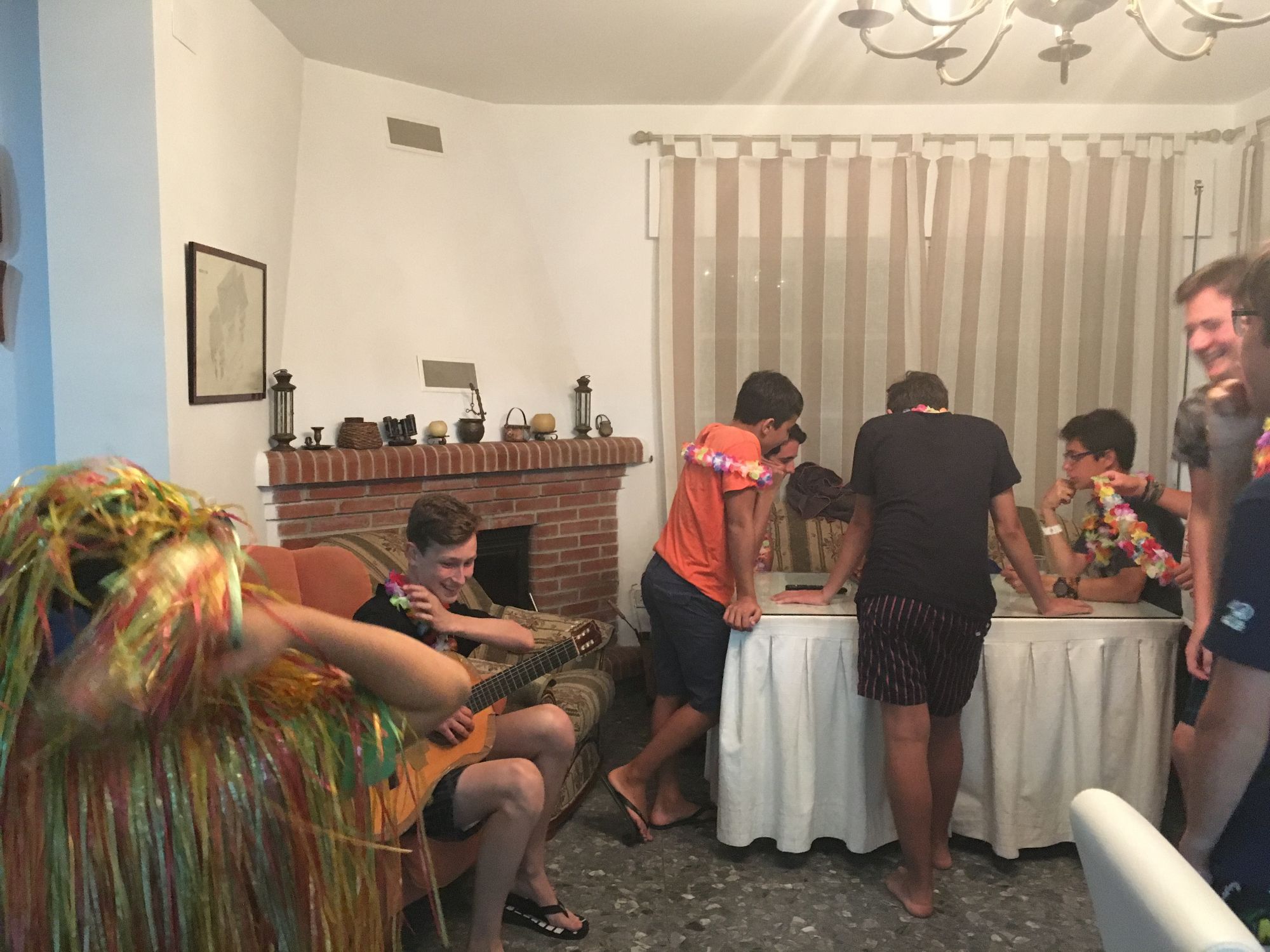 After 2 hours of lessons on Monday morning, we were treated to a Flamenco show by younger pupils at the school and had a lesson in this iconic Spanish dance - so funny! The Spanish students joined in to show us how it should be done! 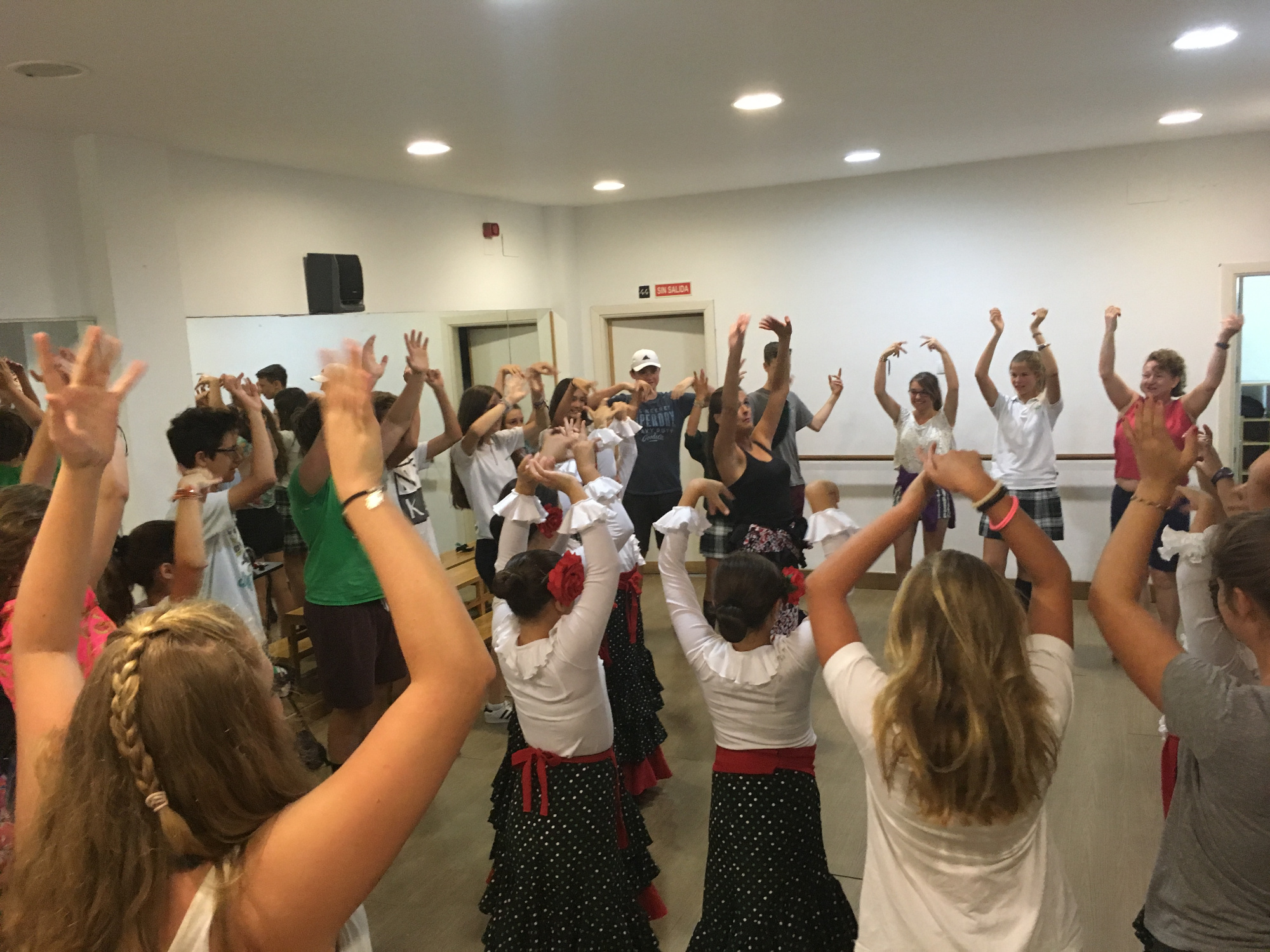 Seville was our final destination on Tuesday. The whole group of Spanish and UK pupils and teachers spent the day together exploring the capital of Andalucia. The glistening sunshine reflected off the tiles in the Plaza de España, which depicts each and every region of Spain. We meandered through the ancient back streets, absorbing the sights including ornate architecture, statues and gorgeous courtyards. The heat was exhausting - temperatures rose to 35c by mid afternoon. 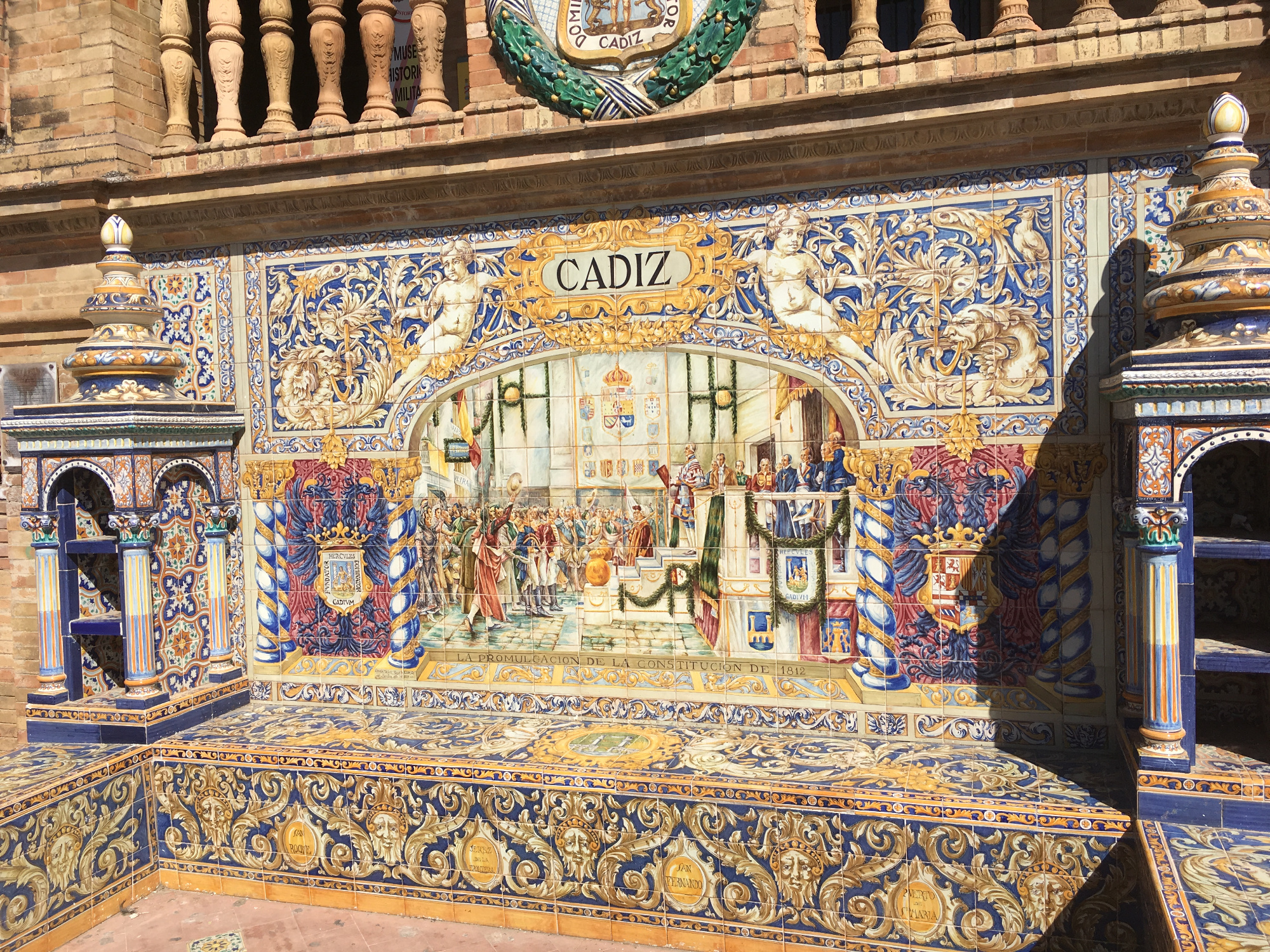 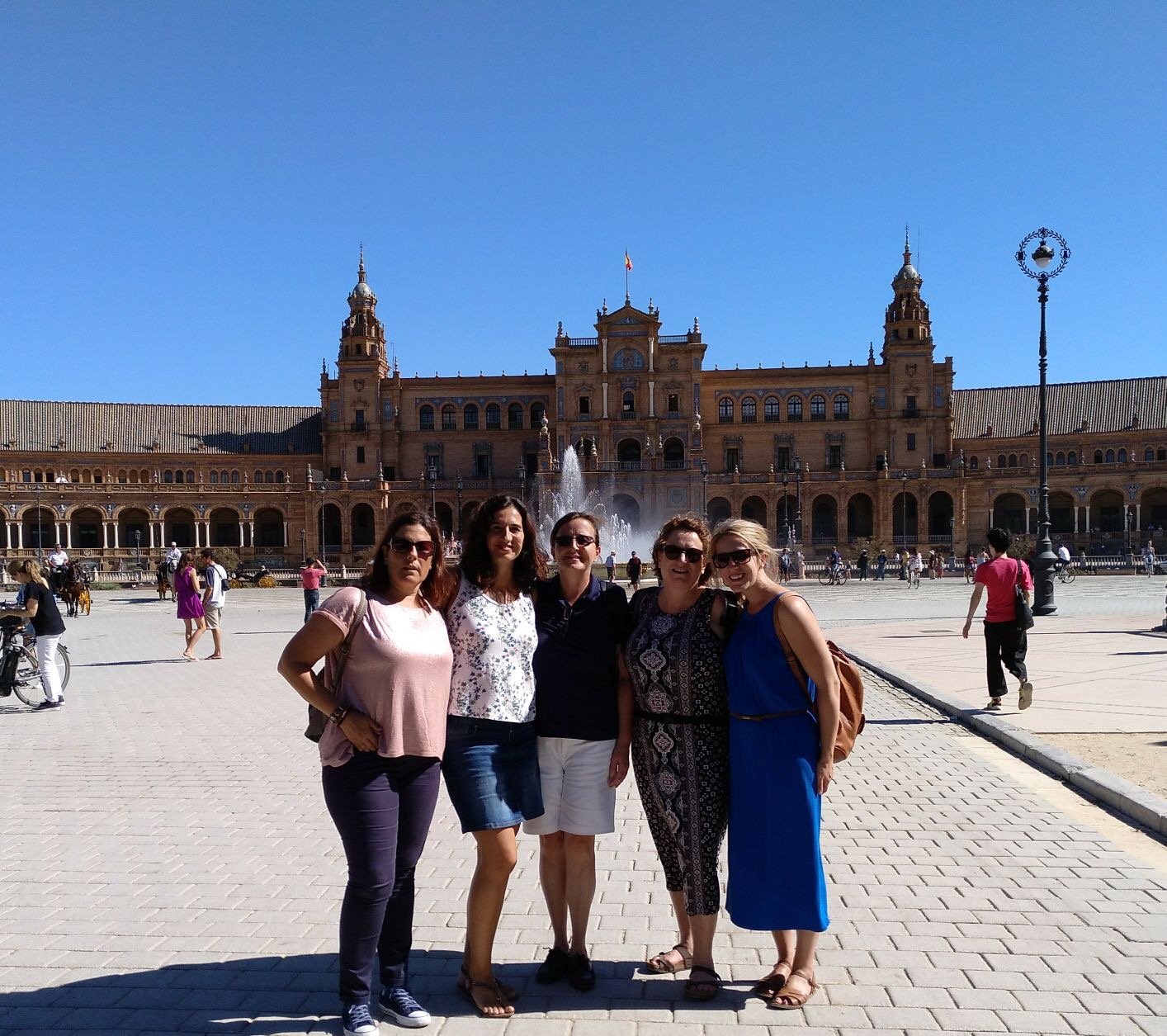 Emotional and heartfelt farewells were exchanged, leaving behind our friends and the start of the end of this year's Spanish Exchange. Some of the Year 10 boys are already planning a return visit next summer to reinforce ties within their friendship group.

Despite arriving back in Cirencester in the early hours of Wednesday morning and a temperature of 10 degrees C, all participants have taken fond and lasting memories from this Language exchange, cementing their original friendships and making new ones, ones which will hopefully be just a starting point and which will develop into life-long and meaningful friendships.

"Andalucía is beautiful, and I have spent a lot of time there over the years, but never have I felt so welcomed and overcome by the hospitality of the people of Cádiz. Nothing was too much trouble for the families and teachers. Such a beautiful city with an abundance of culture - I really had no idea how much I would want to return. A truly amazing week and our pupils have been an absolute credit to Cirencester Deer Park School.” Miss Wright, Trip Leader

"The Spanish Exchange really opened my eyes  regarding family life in another country and trying new foods. My favourite part was definitely when we were on the beach whilst the sun was setting and mucking around in the water. I would highly recommend going on this exchange to anyone who wants to learn about another culture." Alfie (Year 10)

“Yet again the magic of Cádiz mesmerised us all; so beautiful and the people (Gaditanos) are so warm, fun and welcoming. Esther (Spanish Exchange organiser) and her family were fabulous and I can never thank them enough for the hospitality shown to me.” Miss Bryor, Languages Faculty

"The best thing about the Spanish Exchange was hearing and speaking Spanish all day and that the host family cooked us a different typical meal each day." Olivia (Year 9)