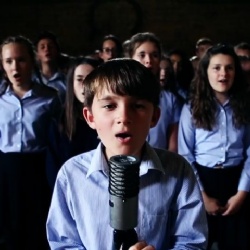 Our pupils' song 'Turn Over The Pages' is released!

Earlier this year we brought you news of our ten week Vocal Songwriting Project with pupils in Year 8. This amazing project was carried out in conjunction with The Songwriting Charity, Make Music Gloucestershire and Gloucestershire Healthy Living and Learning. Read more…

Our pupils worked with the charity Director of Programmes, Ben O’Sullivan, to compose and sing their own song called 'Turn Over the Pages'. Having recorded their song in July at Postlip Hall and then performed it live to the whole school on the last day of the Summer term, we are now very pleased to share their song with you.

Miss Faux, Music teacher says "I am extremely proud of our pupils, the song sounds fantastic and the video is great. Many thanks to the Songwriting Charity and Make Music Gloucestershire for giving our pupils this opportunity."

Ben O'Sullivan from The Songwriting Charity came to our 'Party in the Park' at the end of the Summer term to conduct the songwriting group singing their song. What follows is an extract from his letter to school after the event.

What was extraordinary about Deer Park's concert may be hard to capture in words, but not attempting to would feel something of a betrayal of the positivity and joy I witnessed and experienced first hand that afternoon. Here goes.

Every single student in the school was invited to the concert and the vast majority of them played an active participatory role in bring the concert to life, spontaneously joining in with some of the songs, almost involuntarily applauding the apexes of musical pieces and seeming genuinely impressed and thrilled to see their peers excelling as performers.

The variety of expertise and creative energy on stage was truly astonishing. From individuals performing DJ sets that would not be out of place in a club somewhere in the Mediterranean, to large musical theatre ensembles, singing, dancing and acting to a very high standard. Individual soloists sang with astonishing confidence and the professional attitudes of the staff and students made the whole thing gel together and flow superbly.

In order to accommodate the whole school the show was run twice - once for the lower school and once for the upper school which had the benefit of giving the students on stage the luxury performing everything twice, learning and improving on their performances.

The students in the audience seemed so delighted that they were offered the opportunity to watch their peers perform, and this was encouraged by senior leaders and staff alike who also joined in the singing and rapturous applause. It's so fantastic to see such an atmosphere in a secondary school concert. Academically successful institutions such as Deer Park can easily find themselves at risk of marginalising the performing arts, but this experience showed Deer Park to be a beacon of hope in that regard - that excellence in the arts and academic success can and, at Deer Park anyway, do go hand in hand.