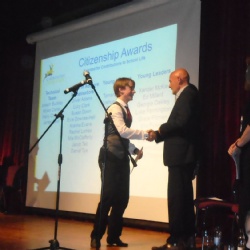 Celebrating the end of Key Stage 3 with Year 9.

It was a pleasure to see so many parents and pupils at our Year 9 Key Stage 3 Celebration of Achievement Evening on Thursday 11 May. The evening marks the imminent end of their time in Key Stage 3 before they move up to Key Stage 4 and embark on their GCSEs after the May half term break.

This year over 80% of the year group were nominated in the Faculty awards and additional pupils received recognition for their contributions to the wider school community. Our Pastoral Team Leader, Mr Bellamy, states "It is a real recognition to be nominated for a Faculty award, as it recognises pupils in the top 2.8% for Attainment, Effort and Improvement." In addition to Faculty awards, pupils received awards for multiple nominations, most progress and academic excellence. Nominees and winners of the awards were celebrated throughout the evening by their peers, parents and staff.

Never before have we had so many pupils receiving awards for 100% Attendance and, in addition, we recognised Anko, Kaylen, Seth and Rosiemai for their outstanding 100% attendance over their first three years at Deer Park. All pupils should be aiming for 100% attendance all the time and these pupils are great role models.

Our congratulations to Ella and Luke who received the Headteacher's Award.

"I just wanted to thank you for a wonderful Year 9 Celebration Evening. It was such a lovely atmosphere and the teachers were so warm and friendly, my daughter and I were inspired by the positivity and energy of all the speeches that were given and we look forward to attending many more events at the school." Year 9 Parent

A special thank you to Cara who performed a solo as an interlude and well done Mia, Olly, and Daniel, aka MOD, who closed the evening with their song and dance routine from our recent MaDD Evening.

Our thanks to guest speaker and former pupil Kate Mackeller-Still for her inspirational words about her journey, which has taken her, via living in China, studying at university, travelling in South America and teaching in a secondary school, to now set up her own company: Alternative Adventures. We hope that her speech showed our pupils what can be achieved with hard work and resilience.

I was tremendously proud of our pupils at our annual Key Stage 3 Celebration of Achievement and genuinely touched by their gratitude as they crossed the stage to shake my hand. It was an absolute joy to learn of their accomplishments and extracurricular commitments and to celebrate their successes. They have risen to our high expectations and demonstrated their potential across and beyond our curriculum. The atmosphere in the Hall was characteristically warm and they were incredibly supportive of each other. It was lovely to see them all on stage at the end!

The following day our Year 9s took their Record of Achievement reports home, which give an indication of their achievements over the past year and provide direction as they make the transition to Key Stage 4. Pupils will begin their new Year 10 timetable after the half term break and will be attending a New Year 10 Pupils' Learning Conference on Tuesday 6 June, which will be complimented by a New Year 10 Parents' Learning Conference on Wednesday 7 June (details to be confirmed).