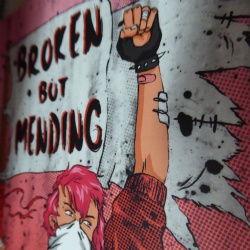 Unfortunately a very small number of pupils at Cirencester Deer Park School face the challenge of dealing with severe illness  - either physical or mental ill health - during their education.

Severe illness may mean that pupils continue their education, for a period of time, with an outside agency such as Gloucestershire Hospital Education Service (GHES). This service allows pupils to keep up to date with their education whilst they undergo treatment or go through recovery and then assists them with reintegration and a smooth transition back to school.

The Gloucestershire Hospital Education Service gives pupils the opportunity to voice their feelings and their challenges in different ways. Beyond Words was a project created with the aim of improving students' writing and their wellbeing - the arts are increasingly being used in medical settings and writing can have a positive impact on mental and physical health. Groups of students met together in a series of workshops to discuss, share, eat and write. Students unable to attend in person were also included, being able to participate online.

In 2016 Cheltenham Festivals published a book of poems and prose from the Beyond Words project called ‘Broken but Mending’. The pieces are a mixture of fiction and autobiography with strong themes of anger, isolation, despair and hope. It is enlightening to see the situation these young people found themselves in, from their point of view. The book's title - Broken but Mending - evokes a sense of resurgence and recovery. Writing published in the book includes work from two of our pupils, see below.

Alone
There she was. Alone. Alone with her thoughts and nothing and no one else.
Although, it didn’t feel that way. It felt as if she was being watched... as if she was a sitting duck at the end of a gun. Aware that her life was in the hands of someone else and could be cut short at any given moment.

It was just as she’d imagined it. A worn down structure made up of a mixture of rust and moss. The slightest touch, or gust of wind could send its fragile frame crashing down into a heap on the dry, cracked soil. Candyfloss clouds formed a thick, grey layer in the sky, giving her the feeling that there was no way to get off this Earth.

Snowy white fur
caked with mud
from endless wandering.
Dark mysterious eyes
ever watching.
Radar-like ears
ever on the alert.
Keen wet shiny nose
forever sniffing.
Immortal sense of adventure
never satisfied.
At one with the wild.
At one with my pack.
I am a wolf.

Furious.
Raging. I’m
Uncontrollable. You can
Suffocate me,
Tie me down, but I would rather you
Rescued me; wrapped your
Arms around me.
Tame me, but never
Ever control me. I’m in
Despair. Can’t you see?

Wild Lands
Here he was, travelling through the desolate landscape of the wild lands. He halted and looked around, observing his surroundings. On his right flank, towering mountains rose up from the ground like spines on a dragon’s back. In front of him lay an impossibly vast lake – who knew what lurked at its bottom? Around him the wind whistled like some eerie phantom and above him the storm clouds rumbled like a hungry bear.
Battered. That’s how I feel. I
Resemble nothing.
Oxygen’s being sucked from my lungs.
Knives dig into my
Ever growing wounds,
Needles poke into my sides in a desperate attempt to fix me.
Bleeding,  l  fall  to  the  ground  as  they  continue  with  their  work.
Unbearable levels of pain start to fade away.
Threads start pulling me together.
My shattered body starts to piece together
Every loose end ties up and the
Needles no longer jab, but
Delicately thread through gaps.
In time,
No
Gaps will be left, but memories will remain forever.