BBC News School Report gives pupils in the UK the chance to make their own news reports for a real audience. Participating schools research and produce their own news reports on interesting things happening in their area. Teachers help develop pupils' journalistic skills to become School Reporters, so they can report on the stories that matter to them and make their voices heard. Last year around 30,000 pupils from over 1,000 schools took part in the annual News Day. 2017 will be the 4th year that Deer Park has taken part.

We will be publishing news throughout the day and hope to have all our stories online by 4pm, so please save this page www.deerparkschool.net/bbcnewsschoolreport as a favourite and return to it later. 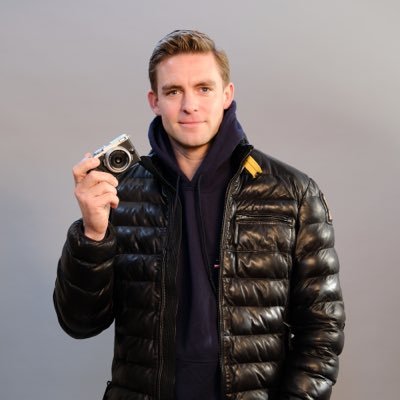 Pete Reed (@PeteReed), former Deer Park pupil and three time Olympic Gold rowing champion, took the time to answer questions from our BBC News School Report team. Thank you! Have you seen the challenge he has set to his Twitter followers? #Bringit2017

by James M and Charlotte (Year 9)

Celebrity cook Jamie Oliver, has been campaigning to combat childhood obesity. When making a speech in parliament, he said that government must “be brave” and create a sugar tax. 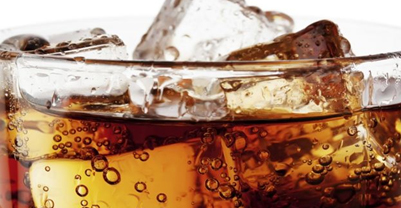 From April 2018 there may be a levy on high sugar content drinks in the UK. It will mean any drink with over 5g sugar per 100ml will be taxed. Sugary drinks have been blamed for a lot of children having a high sugar diet, since the drinks can contain as much as 3 times the suggested daily intake and are often popular among groups of people with already poor diets like teenagers and young adults.

The revenue from the proposed tax, expected to be around £520 million in its first year, will be spent on programmes focused on school sport clubs and improving children's lifestyle in the UK.

Would this tax have any effect though? Are enough measures already in place? The Catering Manager at Cirencester Deer Park School says “I think that people need educating about not giving their babies and young children too much sugar from the beginning...  (it can be) hard to give up.” At Deer Park measures are already in place to prevent sugar proliferation. “We only sell school compliant drinks which are sugar-free or low sugar. We don't sell fruit juices that are harmful to teeth.”  Pupils are also limited to purchasing a maximum of two sweet things per person and can only spend £5 a day maximum.

The tax was first announced in the 2016 Spring Budget by then Chancellor George Osborne. This may become a Bill and be taken to parliament by Summer 2017 and may become law in 2018.

by Susan and Charlotte (Year 9)

The UK Youth Parliament (UKYP) is a youth organisation in the United Kingdom. It consists of democratically elected members aged between 11 and 18. Formed in 2000, the parliament has around 600 members, who are elected to represent the views of young people in their area to government and service providers.

Millie, 15, at Deer Park, is a candidate to be a representative for the Cotswold and Stroud Region. She is a part of the Stroud Youth Council to promote young people’s voices in the community. Her campaign is to give young people in our society more of a chance to be heard.

“Right now,” she states, “I’m working on my campaign and in order to do that I’m speaking to people, doing an assembly and various other events like this interview. At first running for the UKYP was hard, but over time it gets easier.”

If she gets elected, she says she will give young people a voice in the crowd. There will be more information on our website next week. 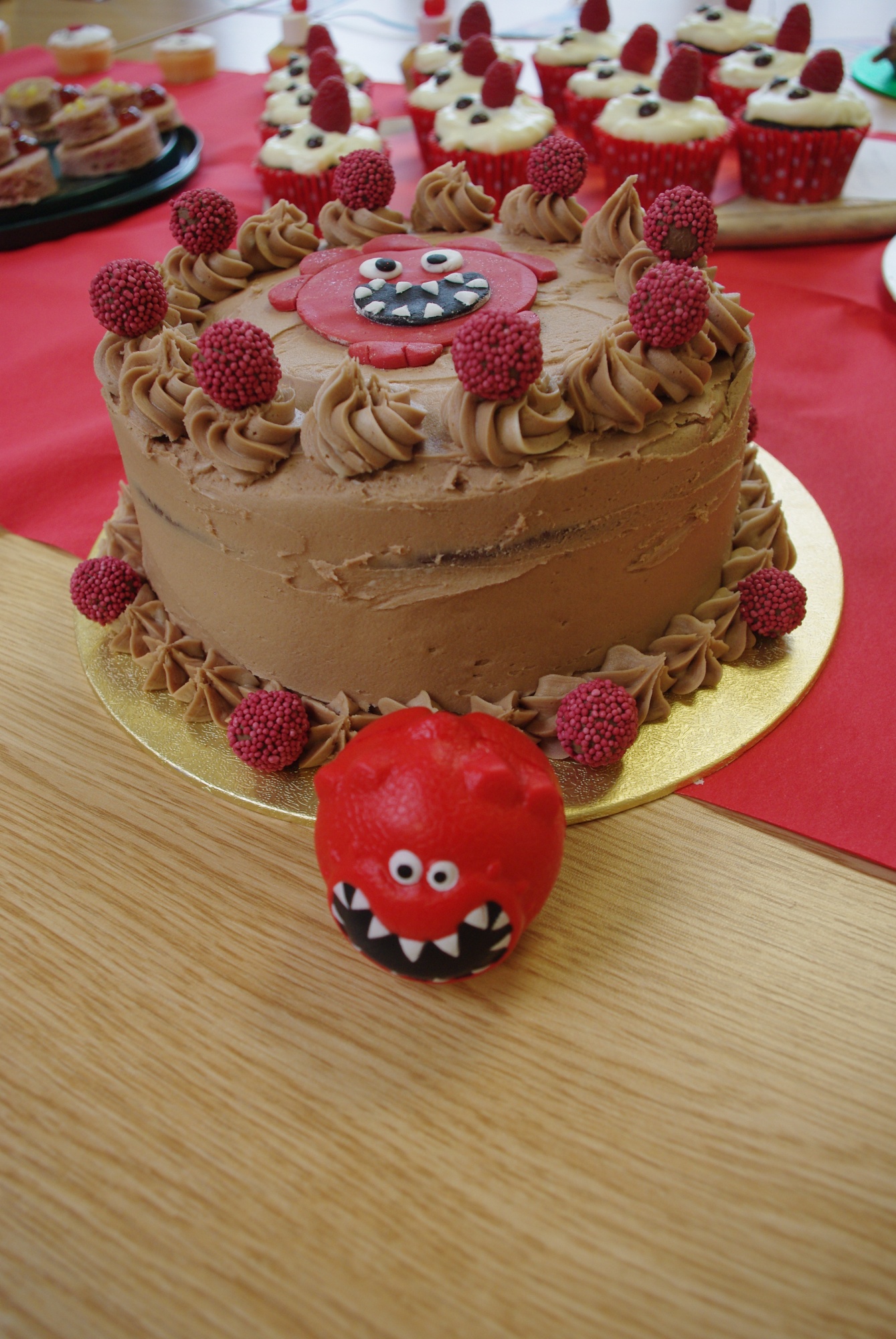 On Tuesday 21 and Wednesday 22 March a large cake bake will be held at Deer Park to raise money for Red Nose Day.

Miss Wood, from our Maths Faculty, has organised the two day Deer Park Bake Off, for Key Stage 3 and Key Stage 4 pupils. They will be making delicious Red Nose Day themed cakes and biscuits. These will be judged by Miss Wood herself and Miss Charleston, also a Maths teacher.

The delicious cakes will then be sold at break and lunch time to pupils, raising money for the charity. Miss Wood said “I am looking forward to seeing all the fantastic cakes and sampling a few!"

At the start of January 2017, a group of pupils in Year 9 at Cirencester Deer Park School were chosen to take part in the Magistrates’ Court Mock Trial Competition. The competition is a national active learning project which helps young people understand how the legal system works.

The competition involves a team of pupils working together as they take on roles such as magistrates, lawyers, witnesses and court staff as they prepare a written case. Schools compete against each other in a live format at a real magistrates’ court. 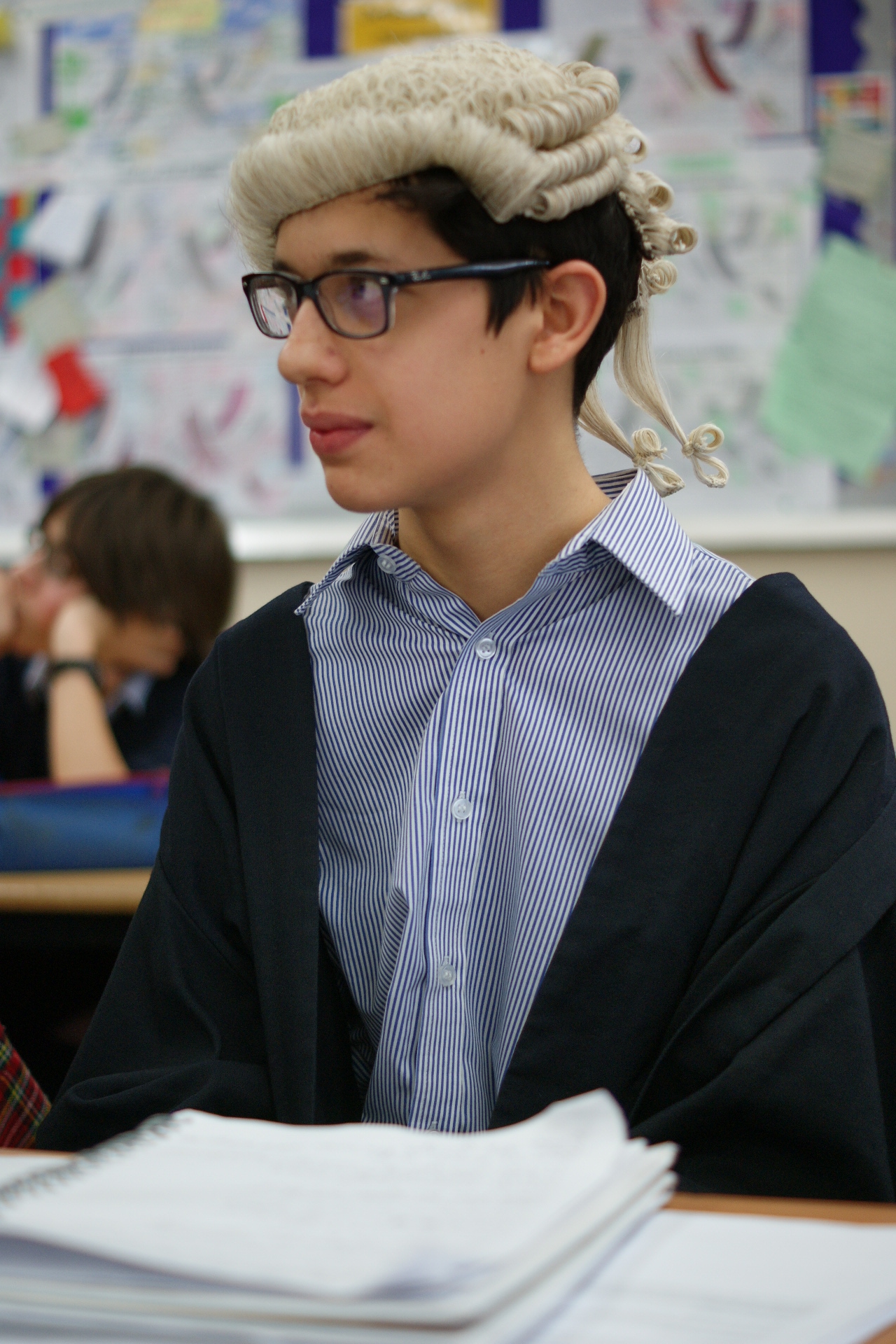 The pupils at Deer Park have been receiving help on the case from a local barrister. They say the tips and advice given has helped them understand the case. “Having the barristers help us prepare our case was really fun and they really helped me learn more about what happens in court,” says Susan who is taking part in the competition.

In January the pupils visited a Magistrates' Court in Chippenham to further help them understand the courtroom procedure. “It was really exciting seeing what happened in court” said one of the Year 9 team.

The Magistrates' Court Mock Trial Competition, which has been running annually since 1994, introduces the legal system to young people in an innovative and exciting way. The competition is helping many pupils develop their communication and presentation skills as they explore what happens at court. In the last 26 years, more than 53,000 students in years 6 to 9 have taken part in criminal mock trials all finding the experience fun and exciting.

"I am really looking forward to my day in court and the Trial this Saturday, 18 March."

Our School Dogs: Cosmo and Denzil 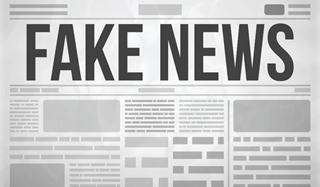 Recently the phenomenon of “fake news” has spread into epidemic proportions amongst the social media. Fake news is a deliberate spread of misinformation, be it via the traditional news media or via social media, with the intent to mislead in order to gain financially or politically. It can also be propaganda.

Fake news has appeared mostly because of social media. Not all sites on the internet are reliable as official news sites; many are focused on re-posts. Those who publish these are, of course, companies who want advertisement revenue. Barack Obama was interviewed after the recent presidential election and he expressed a clear desire to eliminate all aspects of fake news: "everything and nothing is true in my online world" he said, when asked about the widespread impact of global fake news. Fake news has also been confronted by President Donald Trump to be "one of the greatest dangers to modern society".

Research in the US indicates that if shown a fake news story and asked if they considered it true, 40% of students had no doubts about the news story, 20% had little doubt, and only 10% doubted the reliability of the story. If shown a picture or an article that agreed with the first article at a later date, then this almost erased any doubt in the students.

If YOU think you might have been deceived, the experts suggest either a) checking on debunking websites, such as Snopes.com, to see if the website is reliable, b) seeing if the website you are on has any other obviously fake news articles, c) seeing if the website has copied another reliable news site’s style or URL, d) not clicking on the first website result you get from a search engine such as Bing or Google or e) only using reliable mainstream news organisations, such as BBC News. 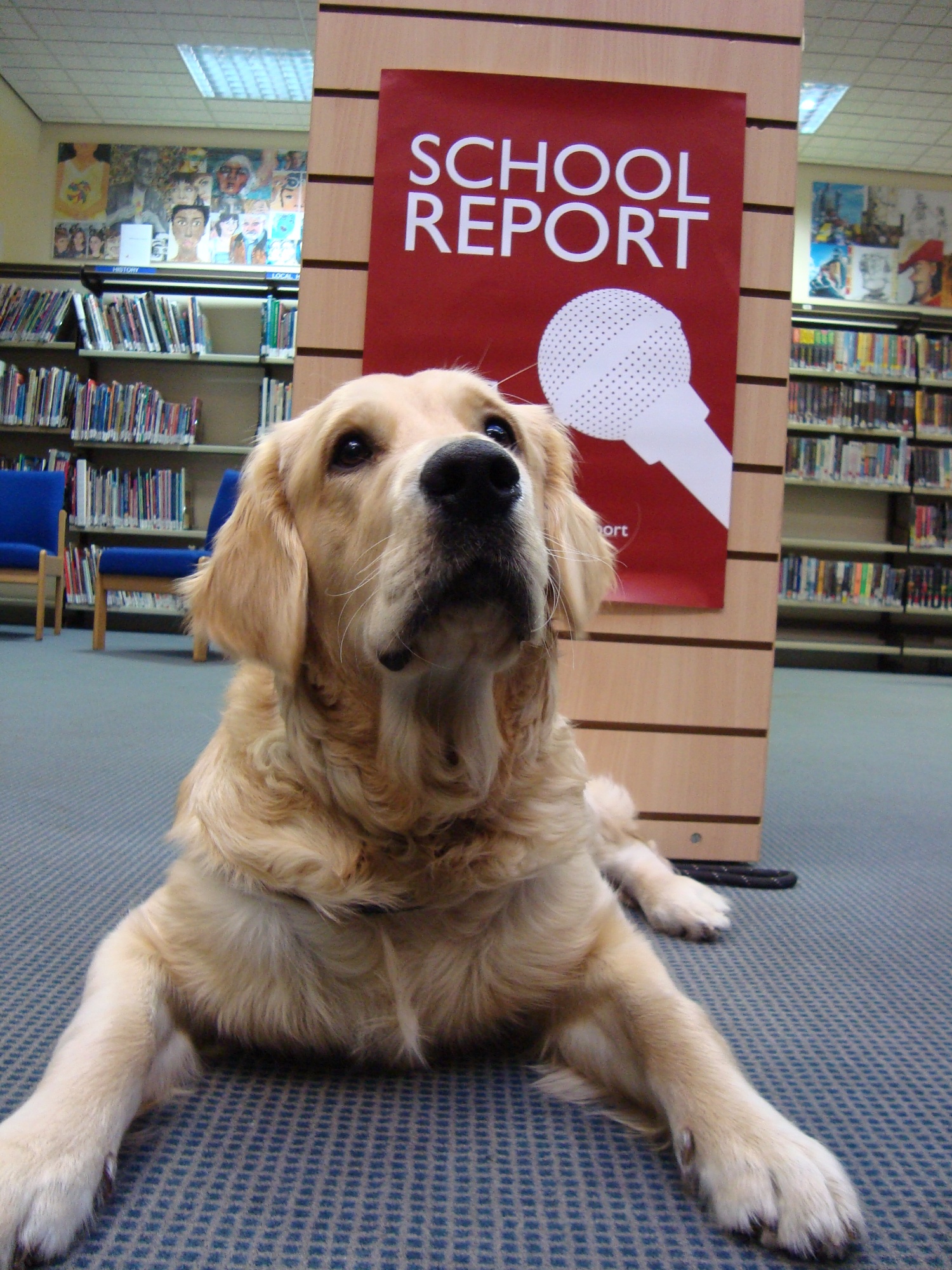 We are up and runninng on BBC News School Report Day! Our team are busy researching, interviewing, writing, editing... 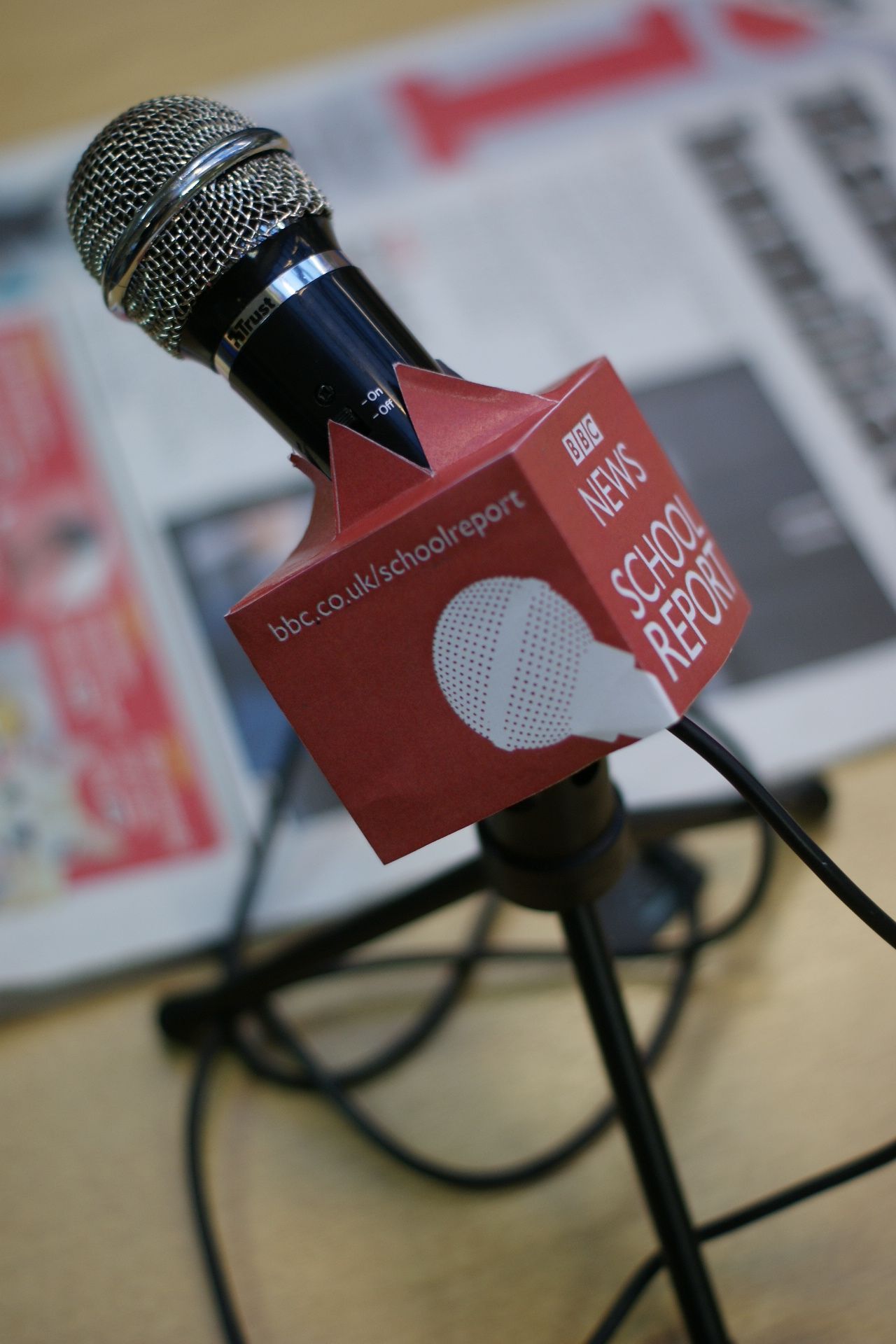 After the successful introduction of Denzil the dog - our pastoral helper and literacy facilitator - Deer Park has adopted a puppy, Denzil's nephew Cosmo, to follow in his footsteps. Look out for an article on ‘A Day in the Life of Cosmo', his daily routine, how he is learning the ropes very quickly and the very positive effect he has on our pupils.

This year our team consists of pupils in Years 7, 8, 9 and 10, managed by English tutor Mrs Wyatt.  We meet on Tuesdays after school in the English faculty in E3. Any pupils interested in joining us should talk with Mrs Wyatt or any members of the pupil team. 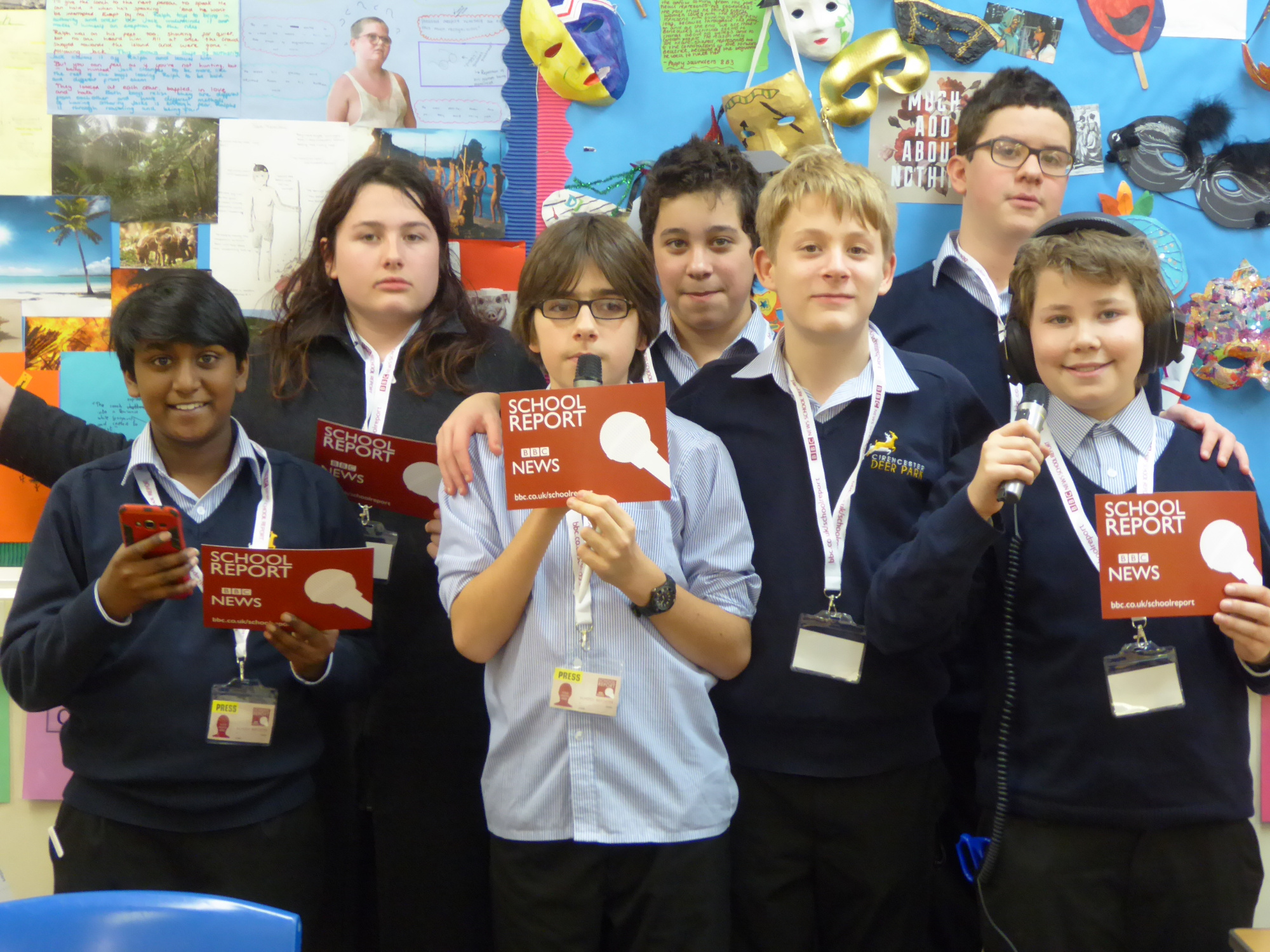 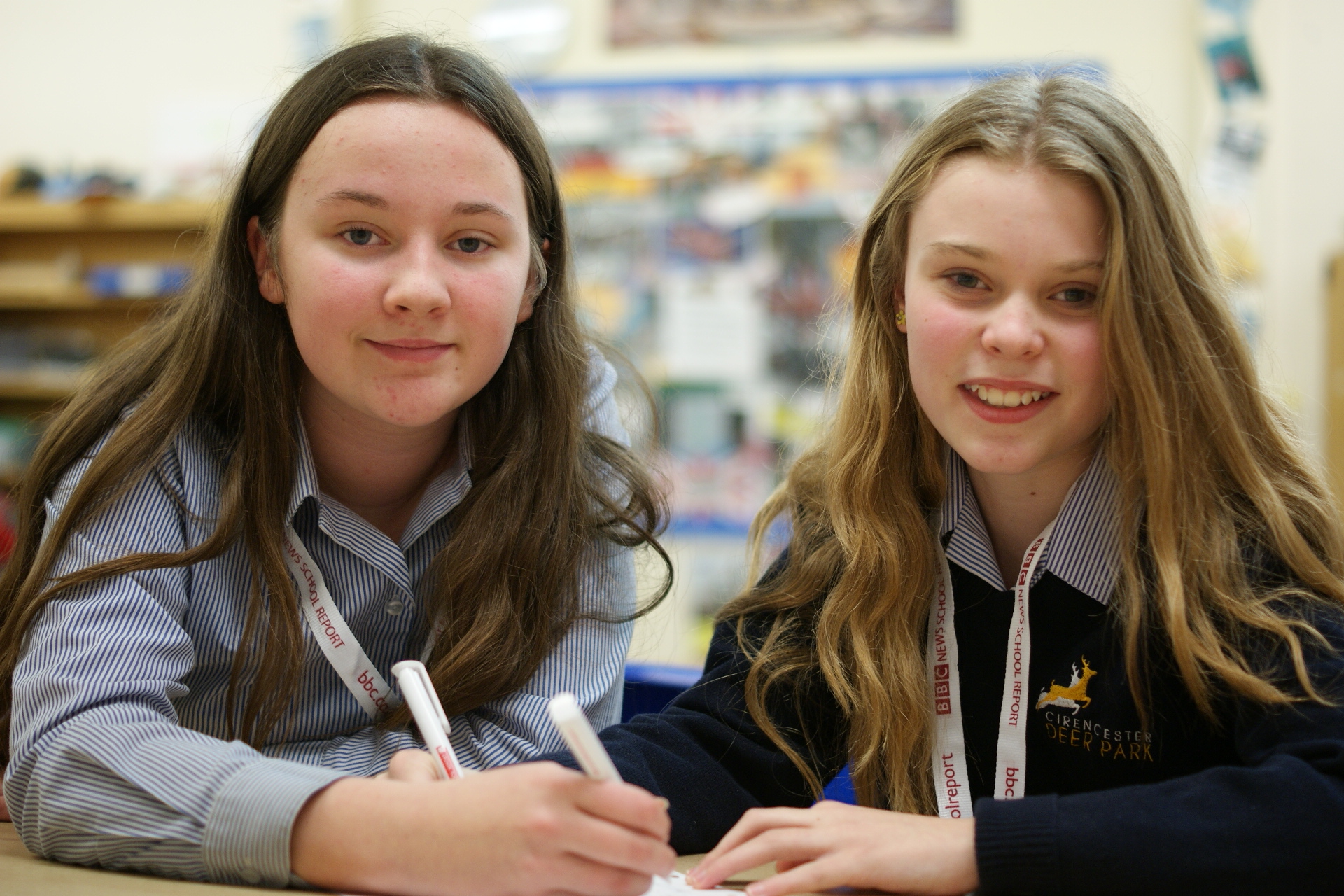 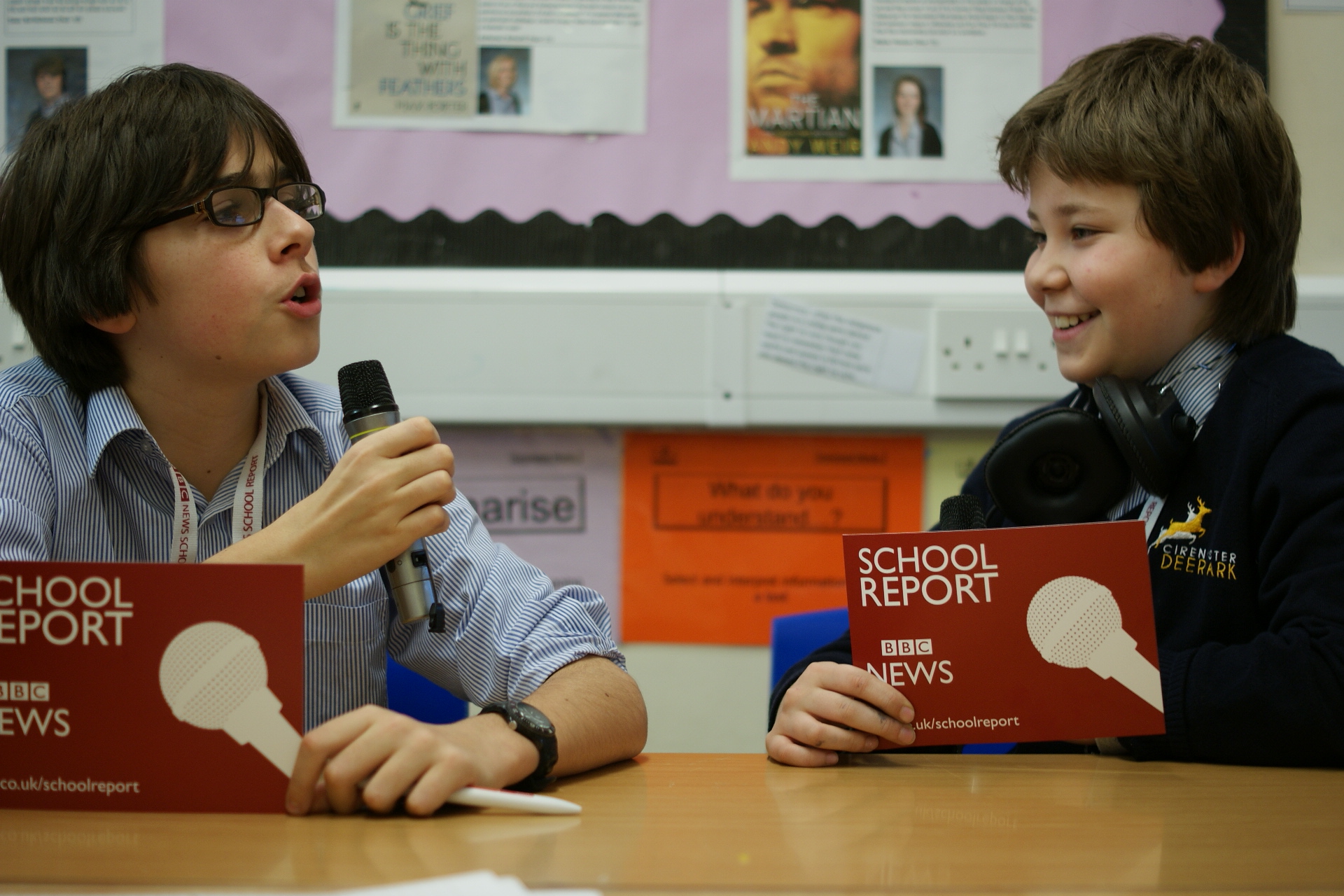 The BBC News School Report team requires a number of skills and pupils work together to plan, research, write, film, record audio, take photographs and make editing decisions. We introduce the three C's of scripting: being clear, concise and correct. Through practice sessions pupils are introduced to the pressures of News Day and helped to learn to work as a team to meet deadlines. The idea is not to create the perfect bulletin, but to focus on team building and time management techniques.

Some of our current team members share why they joined the club. I joined BBC News School Report because...

"...I knew it would help future opportunities and I could learn more about writing and the media." Charlotte, Year 9

"...I love to write and I thought that it would expand my vocabulary and I can explore the writing of journalism." Jenna, Year 8

"...my brother was already doing it. I like being in photos and videos  and I like writing and journalism. I would definitely recommend it to my classmates and fellow pupils." Ethan, Year 7