Pupils in Year 10 and 11 travelled to Holland for the Model United Nations...

During the first week of February 2016, fourteen intrepid pupils from Year 10 and 11 made the journey to Zoetermeer in Holland for the 11th annual Model United Nations (MUNA) at Alfrink College. MUNA is an annual fixture in our school calendar where pupils gather together from all over the globe and debates key issues facing the real United Nations. This year the conference at our Dutch partner school Alfrink College attracted over 350 delegates from schools and colleges across Europe in addition to visiting delegations from Calcutta in India and Beijing in China. 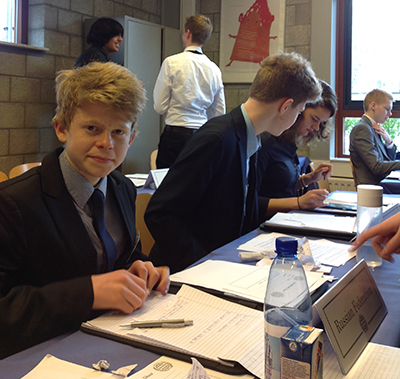 Delegates from Deer Park joined different committees and impressed everyone with their knowledge of the issues under discussions. Mr Johnson, Assistant Head and visiting MUNA Director, commented “What has been most impressive is the way our pupils have grown into the challenge of public speaking as the conference has progressed. Our pupils are working with students 2 or 3 years ahead of them and they have impressed everyone. In many ways this has been a transformative experience for them.” 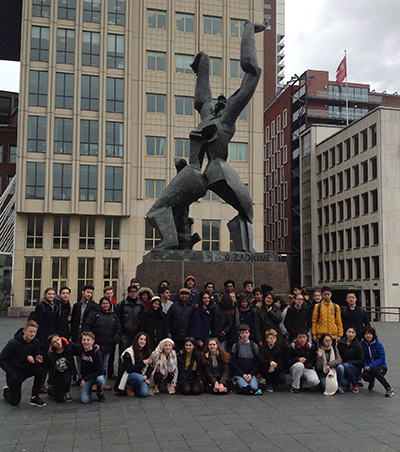 The experience for our pupils was an immersive one as they were staying with Dutch host families for four days. Charlotte, in Year 10, said “I was really nervous about staying with a family but they were so welcoming and helpful.” During the conference pupils were able to tour Rotterdam and investigated the role The Hague plays in Dutch politics and as a centre for human rights work across the world. Pupils held meetings with a variety of international workers including Dutch UN peace keepers and the Hague Peace Project who work to protect human rights campaigners across the world, as well as listening to moving accounts of survivors from mass killings in the Democratic Republic of Congo who went on to become Human Rights protesters. 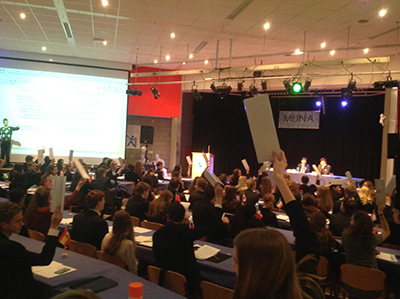 Edie, a Year 10 pupil, commented “Going to MUNA was a wonderful experience. I learnt so much about how the UN works and the processes they go through.” It was observed by the lead teacher for MUNA, Marcel Daas: “ The Deer Park students have really impressed their Dutch peers, and the quality of debate has been the highest ever.”

Henry, in Year 10, summed up the experience “By the end of the conference I was so confident in giving speeches and writing amendments. It was a great experience to work with people from across the globe.”

The annual trip to MUNA at Alfrink College in Holland is part of our school’s ongoing commitment to a global perspective in education for our pupils. It enables delegates to see the real world beyond the school and helps lend relevance to our History, Geography, RP and PSHEe curriculum.

A local MUN is held in Cirencester in September and organised by Deer Park in collaboration with other schools to prepare pupils interested in travelling to Holland the following year. Interested Year 9 pupils should talk with Miss Lillington for details.