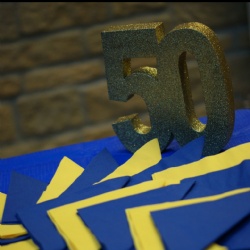 What better way to celebrate 50 years of comprehensive education in Cirencester than by offering our pupils a taste of learning across the last five decades (read more...) and opening our doors to the wider community and giving former pupils, parents, staff and governors the opportunity to relive their memories of the school:

'Thank you so much for a wonderful evening. It was lovely to see old friends, many of whom I had not seen for 30 years, and to see how the school had grown and continued to strive to be an excellent place of learning. I have always remembered the fantastic grounds and setting and feel privileged to have enjoyed an education at Deer Park.' Julie Berrie

'I came along to the reunion with my friend and we had a lovely time. It was very good to see the school doing so well; the young people who had kindly turned out to help were all very welcoming and friendly and a great pleasure to meet. The problem that my friend and I had is that now we are in our fifties, we all look very different to the gangly teenagers were at school. Thank you and the school for arranging this lovely evening.' Dordie Ketley

On Wednesday 12 October 2016 we were proud to mark Cirencester Deer Park’s 50th anniversary as a comprehensive school and to celebrate our achievements and those of our pupils over time. This year with the advent of a new progress measure, Progress 8, in the school’s league tables, the value we add to our pupils’ learning and life chances continues to be highly commendable.

As a fully inclusive school, we are, and always have been, committed to serving the diverse educational needs of all local children and it was an absolute joy to welcome back over 20 former pupils who joined Deer Park in the ‘first form’ in 1966 alongside more recent pupils and teachers in the evening. 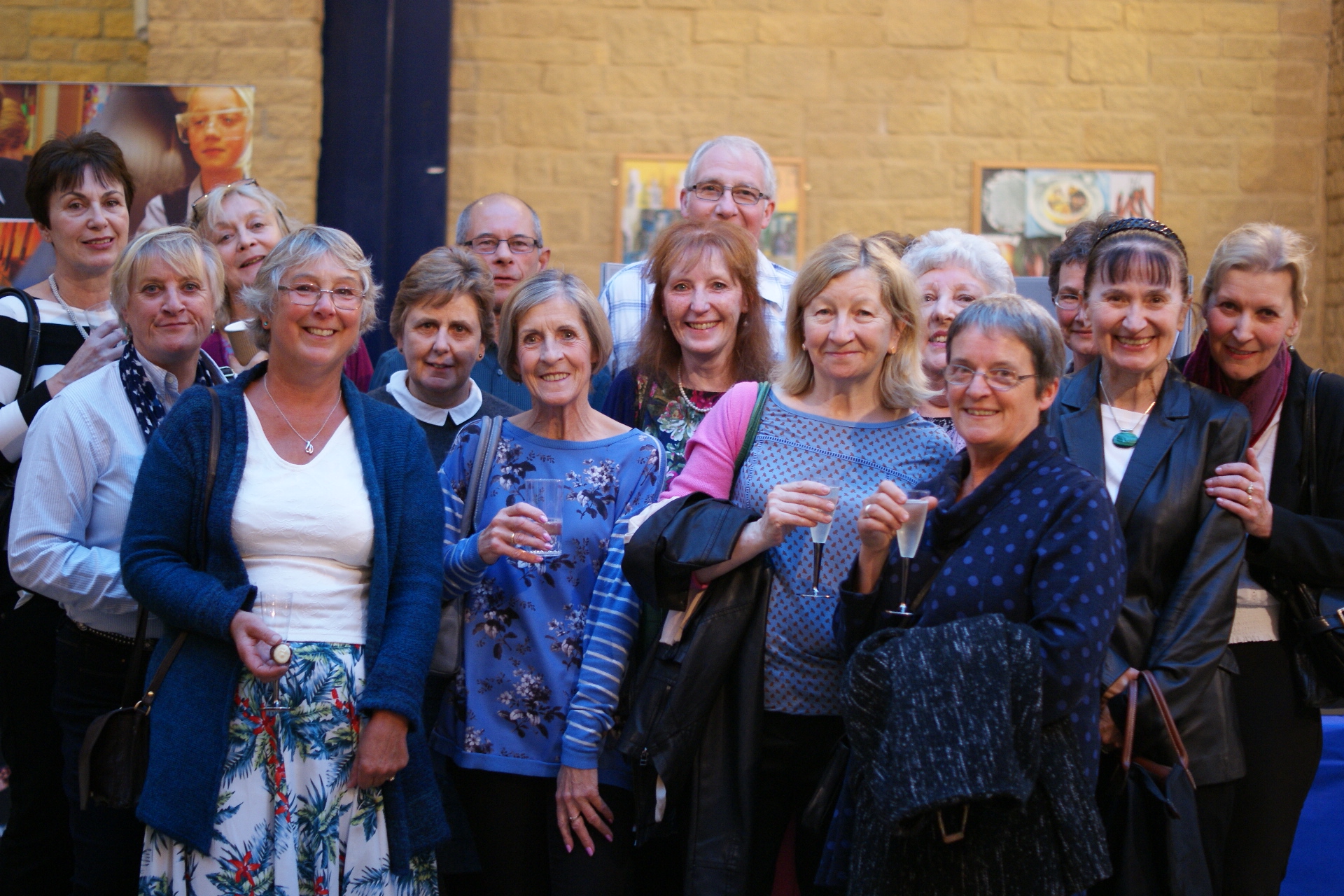 The first headteacher, Marjorie Davis, was fondly remembered and much admired.  Like subsequent headteachers, she was very much in the vanguard in 1966 and demonstrated tremendous resilience as she pioneered comprehensive education locally. Her words, taken from her presentation at the school’s annual Speech Day in 1967 and published in ‘The Cirencesterian’, are as current now as they were then and our present Headteacher, Chiquita Henson, incorporated them into her own presentation as she reflected on the schools’ development and ethos over the last 50 years and shared her belief that the school continues to successfully educate remarkable young people and reaffirmed Ofsted’s observation that they are ‘thoughtful, confident and enterprising’! 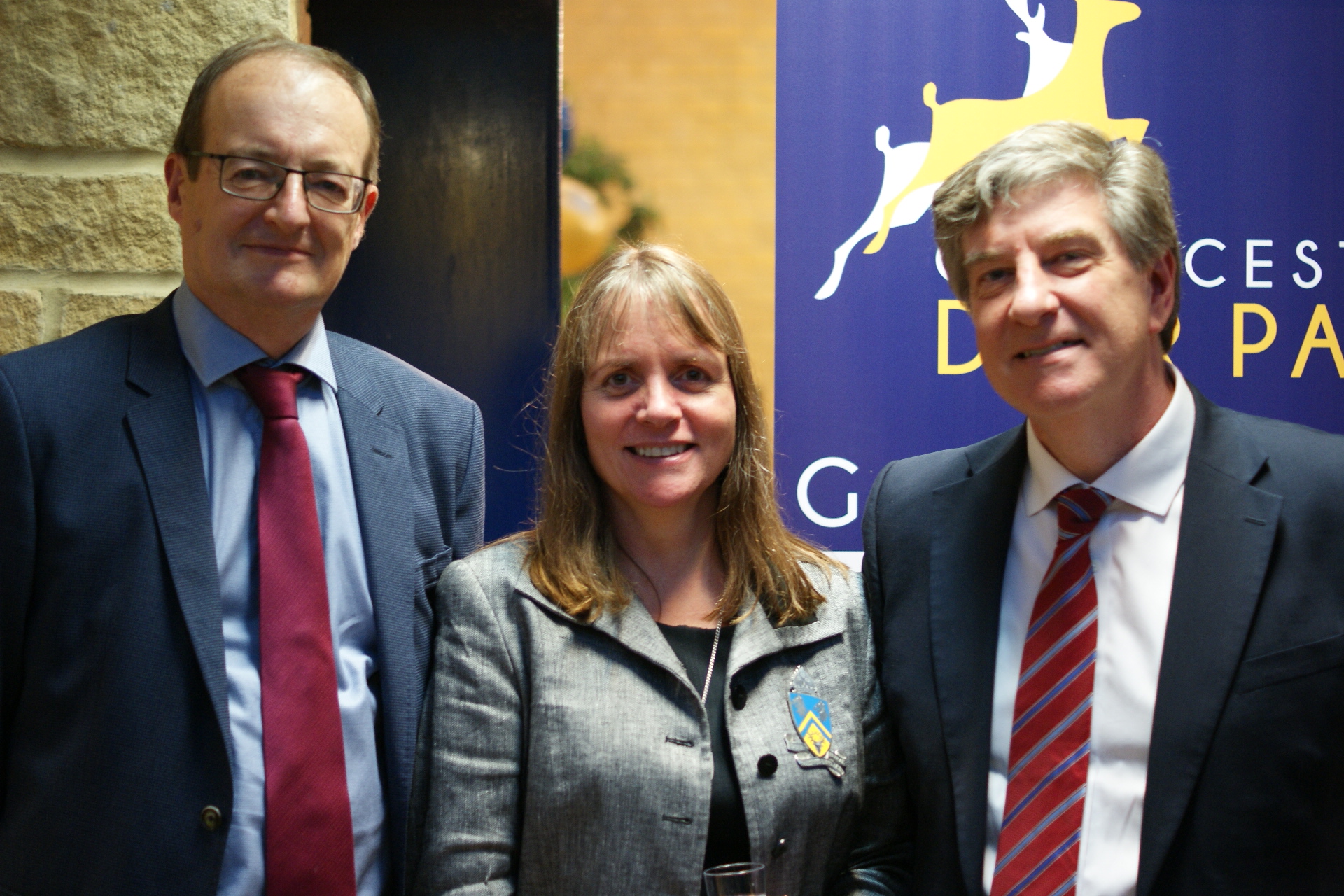 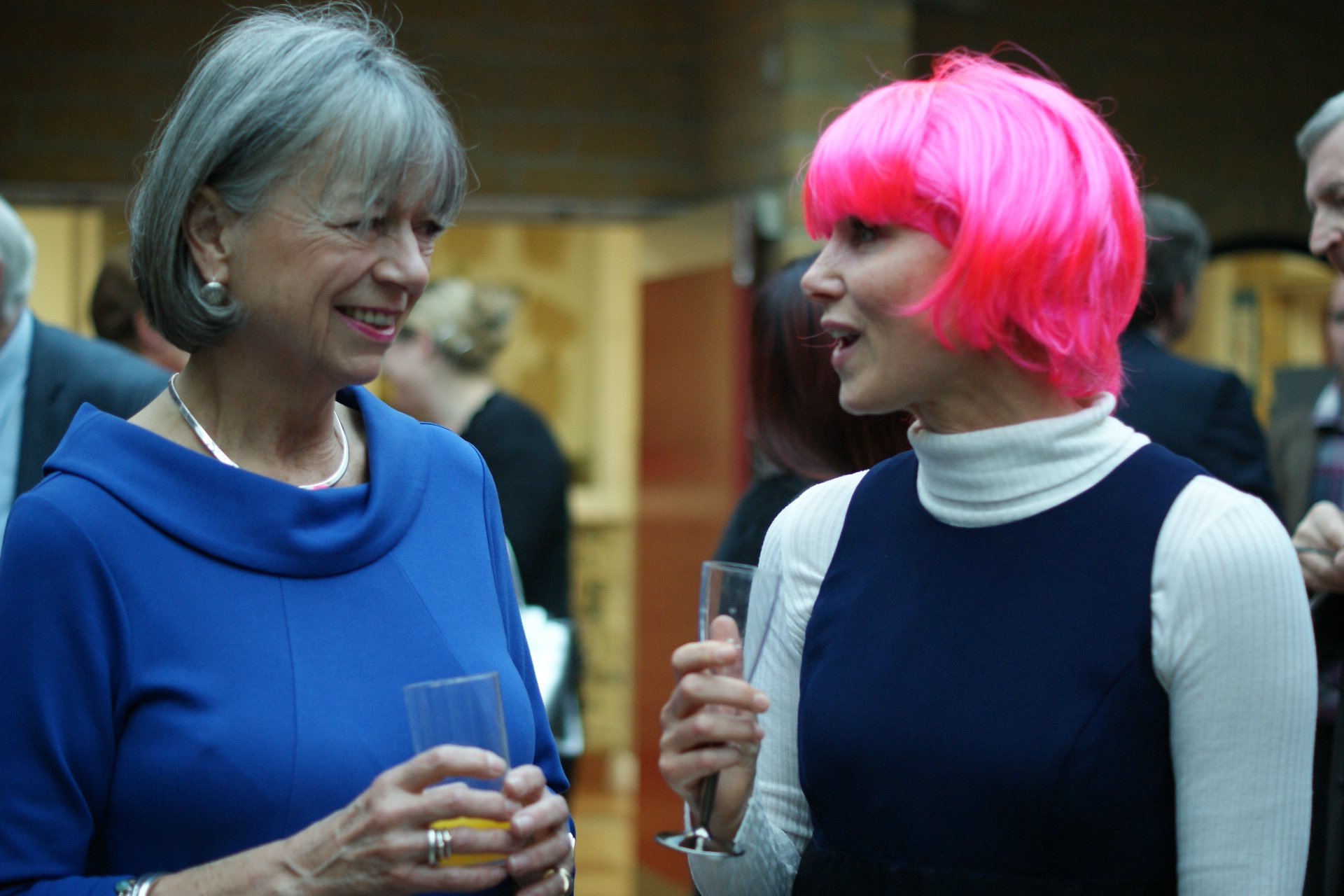 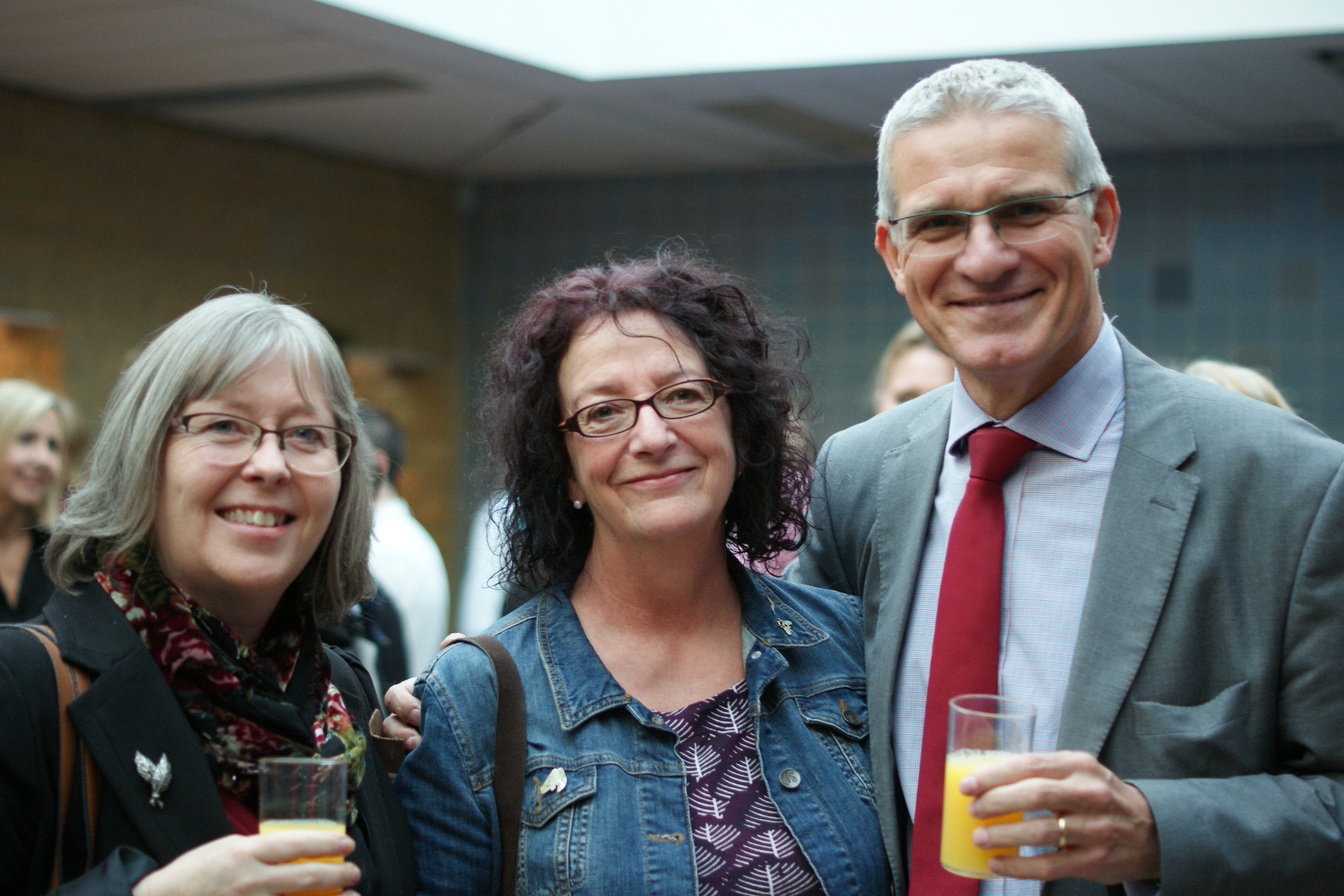 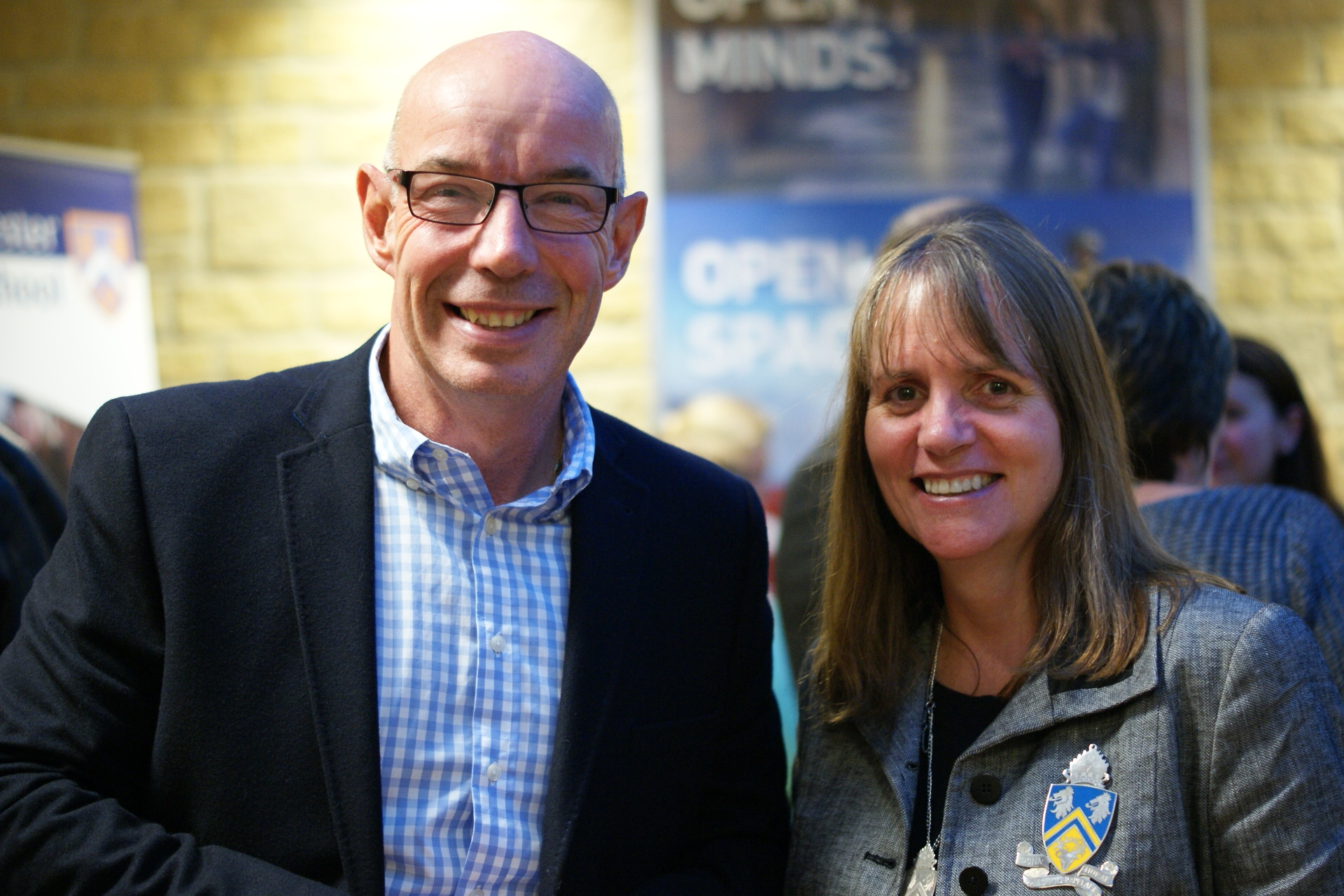 Chiquita Henson, also acknowledged the significant contributions made to education in Cirencester, Gloucestershire and across the nation itself by former Headteachers David Saunders, David Crossley and David Carter, now Sir David Carter, National Commissioner for Schools who immediately after the event tweeted: ‘Great to return to @CDPStoday for the 50 year celebration of being a comprehensive school. I was there for 6 of them & loved every minute.’

I was especially delighted to welcome so many former pupils, parents, staff, governors and our friends in the community back to the school on the evening of Wednesday 12 October for our 50th anniversary celebrations. It was good to mark all that is good about comprehensive education. It was lovely to listen to our guests’ personal recollections and to learn of their professional development. There were at least eight former members of staff at the school who are now headteachers or experienced leaders in education present at the event and they recalled how their experiences here at Deer Park had inspired them and contributed to shaping their careers. Having been here for a long time myself, it was good to re-connect with so many and share our memories.

In her presentation Chiquita Henson said it had been a privilege to serve with each of the 'David' Headteachers. Being effective Heads at Deer Park certainly contributed to shaping the school’s ethos and their careers:

I joined Cirencester Deer Park in 1989 as deputy of the then 11-19 School and was appointed Head of the new 11-16 in 1991. As a young Head I felt a deep commitment to build on the school’s current strengths but also to find new ones too.  I made a promise to governors when I was appointed that Deer Park would seek to convince every young person that they can achieve more than they first thought. It became the school’s first aim. It is this and the way that Deer Park does this that makes it stand out.  Perhaps most of all it was the ethos of trust that meant most to me. It was that sense of adventure, can do philosophy and positive staff and student culture that underpinned the success of the school and its students then and no doubt now too. At a personal level the comment from Professor Sir Tim Brighouse meant a great deal to me. He said to me then and repeated it a major conference last year that Deer Park was a school you would want to send your son or daughter to. What better judgment is there than that. The school retains a special place in my heart and much of my thinking about the characteristics of what makes a really good school were formed and developed in my eight years at Deer Park.’ David Crossley, Head, 1991-97.

'I just wanted to write and say what a brilliant night it was on Wednesday 12 October.  Deer Park is such a special place and I have such happy memories of working in the school as a receptionist. There was never an occasion when I didn't want to go to work.  It was so good catching up with ex Deer Parkers as well as some that I am still in touch with.' Carol Radway

'Thank you for hosting such a lovely event on Wednesday 12 October to celebrate Deer Park's 50th anniversary as a comprehensive school. It was so nice to see so many different people who all have memories of Deer Park. I thought Chiquita Henson's speech was just right with a lovely mixture of past and present tales and I feel proud to be a part of Deer Park.' Jo Chisholm, Parent and governor

Pupils learnt about the school’s anniversary in their assemblies and during the day on Wednesday 12 October 2016. Read more...