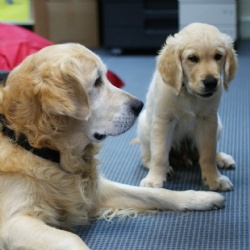 Back in January 2016 we decided to trial having a dog in school. Liz Lang, Deputy Head, writes: As the person leading this trial my initial thoughts were ‘Am I being ridiculous?’ and ‘Is this really the right thing to do?’  Looking back over the trial (and time since) of having Denzil in school, I cannot believe the profound difference that Denzil – one dog – has had on our school community.

When talking to family and friends about Denzil they are always curious about what he does during the school day: ‘He listens to pupils read’, I say.  I don’t usually have to qualify that Denzil doesn’t understand what’s being read to him, but actually, that’s part of his success with our more reluctant readers: he doesn’t judge them.  Denzil will look intently at a pupil reading to him and the result is that the reader feels great!  Denzil certainly enjoys being read to and this gives the reader confidence to keep going and to read more (and more). 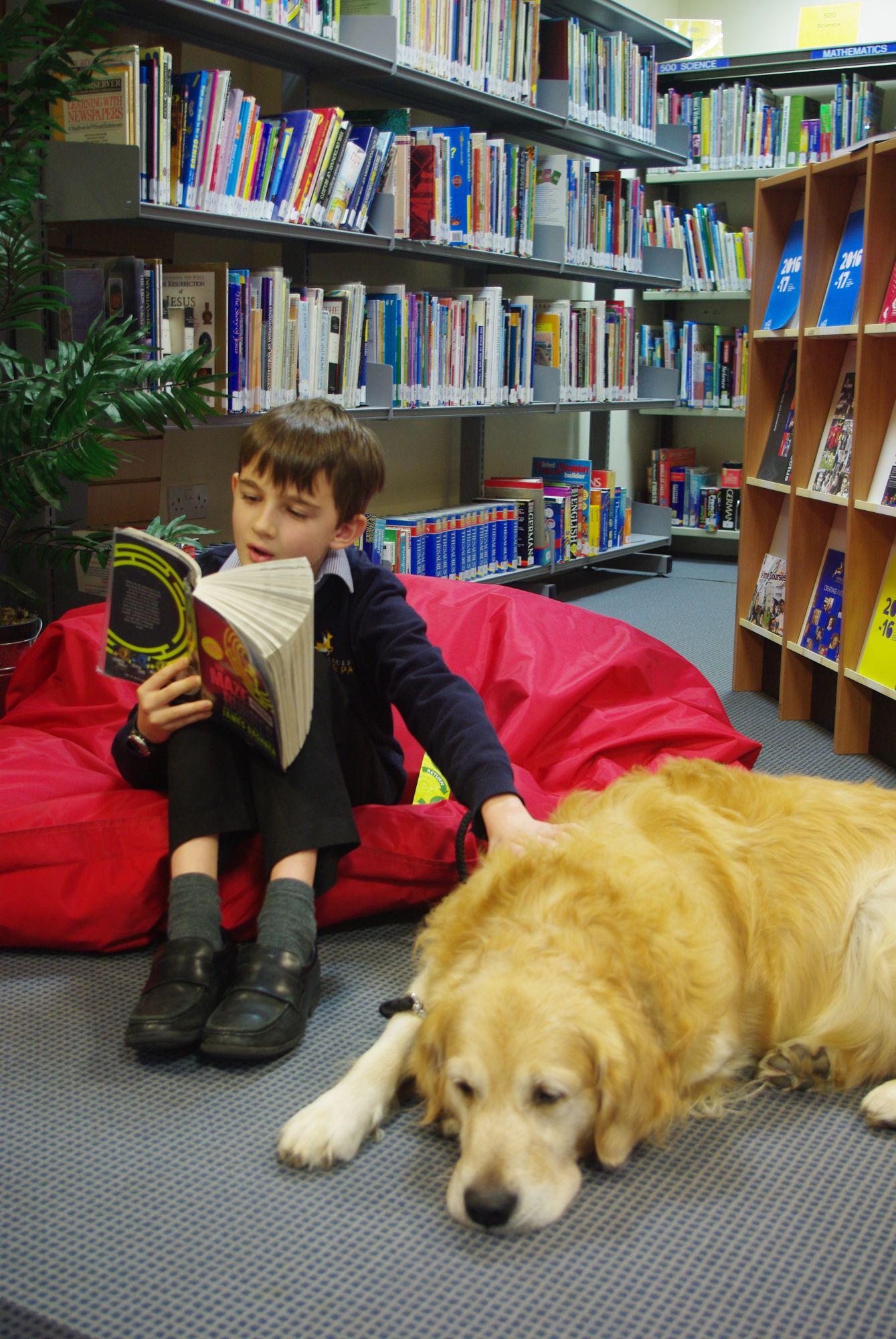 Since the trial began Denzil has been read to by pupils reluctant to read aloud to anyone and this has had, and continues to have, a positive impact on the pupils’ wider learning: as a result pupils have demonstrated increased confidence in reading materials in a range of subjects.

Denzil is the well-loved dog of Mrs Stubbs, Year Leader for Year 11, and continues to be in school this academic year for two days a week. He has a set timetable which includes time in the library, time on duty around the school site. Denzil spends some time in the Pastoral Office and he is sometimes in Inclusion, working with pupils who are spending time out of a subject lesson for a variety of reasons.

The emotional benefits of having a dog around school have also been really evident: pupils who are upset have been calmed by simply stroking Denzil – and he loves the attention!  He does have a knack of bringing calm – perhaps because he is so quiet. Everywhere you walk with Denzil, pupils and staff are pleased to see him. The pupils love throwing tennis balls around for him to chase and he loves playing with them.  The laughter generated by him playing with pupils is a delight to hear.

Dogs have been used to assist individuals coping with grief since World War Two. In school we have had some pupils who have been processing the loss of a close family member and Denzil has provided good therapy for these pupils: just sitting with the pupil concerned, allowing the pupil to stroke Denzil and demonstrate affection has helped whilst they have been working through their feelings.  Pupils who have been struggling to get through the door at school, due to anxiety, have also found Denzil to be great therapy: he has, on occasions, met the pupil concerned at their car and they have walked Denzil around the school site before beginning the school day.  By the time lessons have started they have become far less anxious and are able go to their classes and learn, which is ultimately what we want to enable every pupil to do to the best of their ability.

Pupils involved in the BBC News School Report earlier this year seized the opportunity to produce a report all about Denzil and what he does in school and this was aired on BBC Radio 4’s ‘Woman’s Hour’ on Thursday 6 October 2016.

"Hurrah for Denzil the dog!! Inspired idea and fantastic to go out of the box for reading. Bravo Deer Park School. Made me laugh and cry!" Radio 4 Woman's Hour listener

We have been so pleased with Denzil’s impact in school that we wanted more pupils to have opportunities to read to a school dog.  We took the decision in the summer term to invest in a school puppy.  We were so impressed with Denzil’s temperament – his well-mannered nature – that we wanted a puppy with the same character traits… so we now have a puppy from the same family as Denzil: our new puppy is, in fact, Denzil’s nephew!

Assistant Head Mr Johnson bravely made a decision to get a dog for his family 13 weeks ago which coincided with the School’s decision to train a puppy to work alongside Denzil. The result was the adoption of Cosmo as family pet and school dog. Named by Mr Johnson’s son, Cosmo means “relating to the world or universe”. This seemed an appropriate name for a dog in a school with such an outward facing and international ethos. 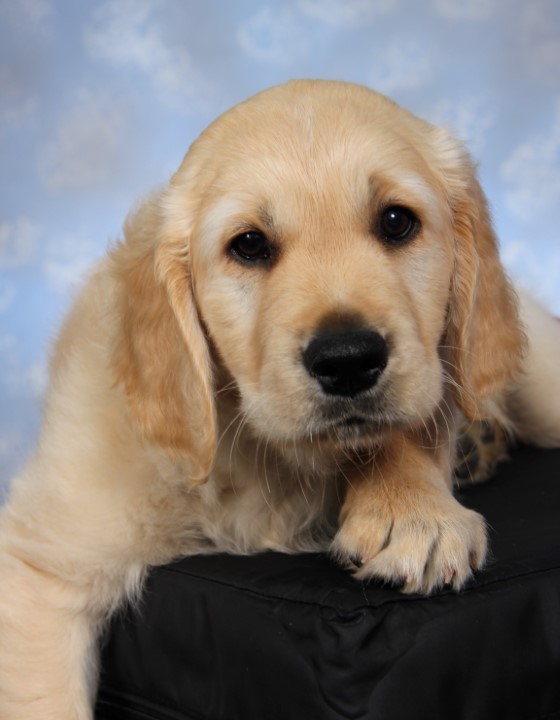 Cosmo has had a similar effect at school and at home. He has brought the community of the school closer together and has already had an impact on the wellbeing of our pupils- he is a recognisable and positive presence for all pupils and especially our more vulnerable learners”

Since September Cosmo has been coming into school on a part-time basis, gradually familiarising himself with the sights, sounds and smells of our school.  He has been a huge hit with the pupils  since making his first appearance. Cosmo will gradually start going to more lessons as he grows. Just like any very young child, Cosmo finds it difficult to sit still for too long but he has settled into school life remarkably well.  He is being trained so that he, too, will be able to listen to pupils read. Pupil well-being is really important to us: we know that the best learners are happy learners.  Cosmo and Denzil invariably make pupils (and staff) smile when they are around the school site and some of our most vulnerable pupils actively seek Cosmo and Denzil out at lunchtimes; because they make them happy. 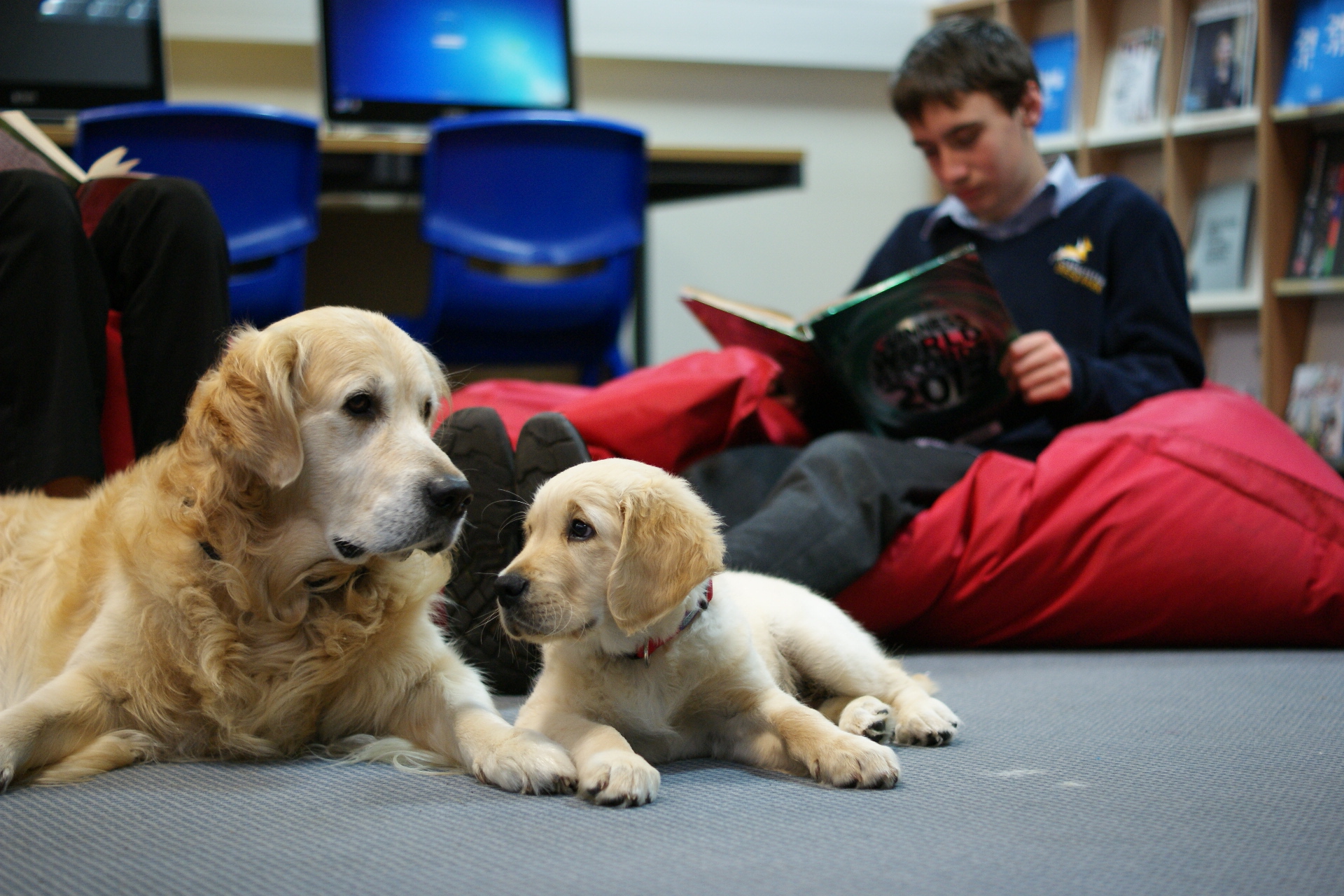 We will continue to develop the way that Cosmo and Denzil work in school over the coming year and we are confident that we will see pupils gain confidence in their reading as a result of this.  Looking back at the start of Deer Park having dogs in school, I did not imagine that we would see the positive impact on the school community that we have already. I look forward to seeing many more pupils reading and spending time with Denzil and Cosmo, seeing them having fun and growing in confidence as a result.