We are looking forward to marking the 50th anniversary at our special commemorative open evening and reception on Wednesday 12 October 2016.  We are hoping former pupils, parents and staff will join us to reflect on and share their experiences at the school.  To find out more, contact alumni@deerparkschool.net. During the day our current pupils will learn through the decades as each subject area plans to deliver the curriculum as it was at that time. 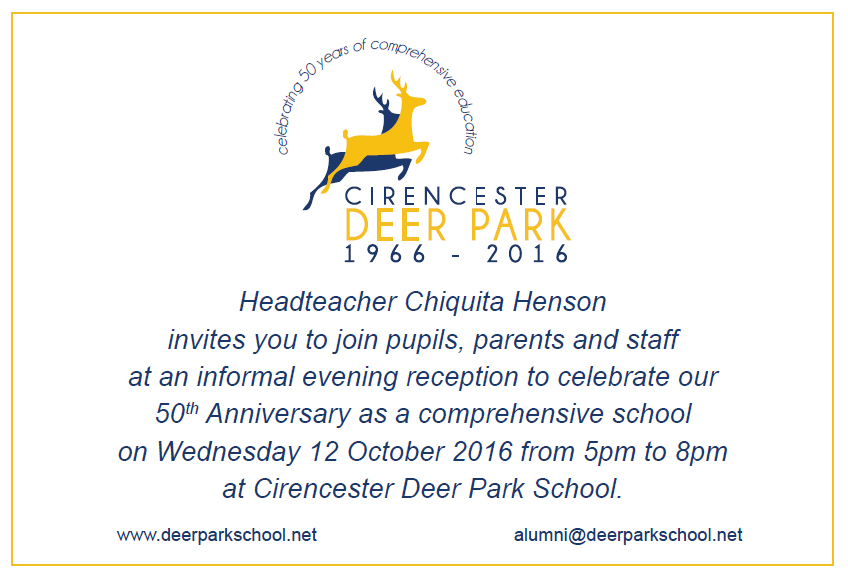 In September 2016 Cirencester Deer Park School and Cirencester College will mark significant milestones in Cirencester’s educational history. While each institution will celebrate their 25th year as an 11-16 school and sixth form college respectively, both will commemorate the 50th anniversary of comprehensive education in the town and reflect on the achievements of their young people.

While controversial at the time, the decision of Michael Ingram, Chair of the governing body of Cirencester Grammar School, to support the move to comprehensive education in Cirencester was enlightened and over five decades has provided Cirencester with exceptionally high quality education.

Our local education provision from 11-18 is, and has always been, very inclusive and dynamic.  Our young people continue to have every opportunity to achieve exceptionally well and progress successfully into the next phase of their lives and learning.

As well as looking to the future, Cirencester Deer Park School continues to build on the traditions of the past and the legacy of Cirencester Grammar School, founded in 1242, is evident in the school’s high expectations and commitment to excellence and its pupils’ achievements.

In 1966 Marjorie Davis, Head of Cirencester County Secondary School for Girls, was appointed Head of the new comprehensive until her retirement in 1977.  She was careful to ensure there was an appropriate curriculum for all pupils, especially from 1972 when the school leaving age was raised nationally from 15 to 16.  As Head, Marjorie Davis was determined ‘to build a relevant education for the future on a secure foundation of well tried ideas from the past.’  However, while she claimed to approach ‘innovation with caution’, the school often pioneered ideas and this positive ‘can do’ ethos inspired subsequent headteachers, David Saunders (1977-91), David Crossley (1991-97), David Carter (1997-2003) and Chiquita Henson (2003- present) and continues to permeate the school.

At Deer Park everything was possible! The staff were engaged and hardworking, the parents supportive and the children wanted to learn. My time at the school was amongst the most enjoyable I experienced in my career to date. It gave me the confidence to take on a second headship, set up the first multi academy trust in the South West, and then move on to become the first Regional Schools Commissioner in the South West and now the National Schools Commissioner.  My two sons were educated at Cirencester Deer Park School and they have gone on to start successful careers in London and Barcelona in the world of journalism and corporate marketing and both have much to thank the school for.

David Crossley, who was appointed to lead the new 11-16 school 25 years ago in 1991 and has gone on to influence education policy, has also reflected on his time at Deer Park: ‘I joined Cirencester Deer Park in 1989 as deputy of the then 11-19 School and was appointed Head of the new 11-16 in 1991. As a young head I felt a deep commitment to build on the school’s existing strengths but also to find new ones too.  I made a promise to governors when I was appointed that Deer Park would seek to convince every young person that they can achieve more than they first thought. It became the school’s first aim. It is and the way that Deer Park does this that makes it stand out.  Perhaps most of all it was the ethos of trust that meant most to me. It was that sense of adventure, can do philosophy and positive staff and student culture that underpinned the success of the school and its students then and no doubt now too.  To me it was important to do what you say and be judged by what you do rather than what you say.  At a personal level the comment from Professor Sir Tim Brighouse meant a great deal to me. He said to me then and repeated it a major conference last year that Deer Park was a school you would want to send your son or daughter to. What better judgment is there than that. The school retains a special place in my heart and much of my thinking about the characteristics of what makes a really good school were formed and developed in my 8 years at Deer Park.

Alongside Deer Park’s celebration, Cirencester Sixth Form College celebrates 25 years of post-16 education in the town on the 1 September 2016.  A series of activities are planned for the 25th anniversary year involving students, alumni, prospective students, staff, governors and the community of Cirencester.

The College’s first principal, Nigel Robbins, who was appointed a year prior to the College opening in 1991, commented, ‘Cirencester has such a rich history of education from the fifteenth century onwards and it has been an honour to work to build on that tradition in an inclusive educational system, where high achievers thrive and all students are challenged to reach their full potential.’

Kim Clifford, the current principal of the College, attributes this achievement of quality and excellence in the College to her team of dedicated and specialist staff, some who have been here from the very beginning.  Kim Clifford added, ‘Cirencester College puts the student at the centre of everything it does and is proud of its caring community ethos.’

The huge number of young people who have progressed successfully from the College, many from Cirencester Deer Park and Cirencester Kingshill, is a continuing source of pride in the quality of education available to our young people in Cirencester.