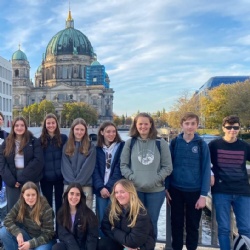 Forty Year 11 GCSE History pupils and four members of staff travelled to Berlin, the capital of Germany and the centre of the Cold War, from Thursday 20 until Sunday 23 October 2022. The aim of the trip was to discover more about the city's past and to support the pupils' GSCE History studies of Nazi Germany and the Cold War.

Following a day of travelling, with a weather-induced delay at Stanstead Airport, pupils had the opportunity to explore key sites in the East of the city when doing a walking tour with our expert guides Konstanze and Johannes. The tour included Alexanderplatz, Museum Island, the Berlin Cathedral, Bebelplatz and the Humboldt Forum. Our young people were able to orientate themselves with the city, as well as beginning to develop their understanding of this unique capital. We stayed in a hotel in the east with a view of the Berliner Fernsehturm, the iconic television tower. 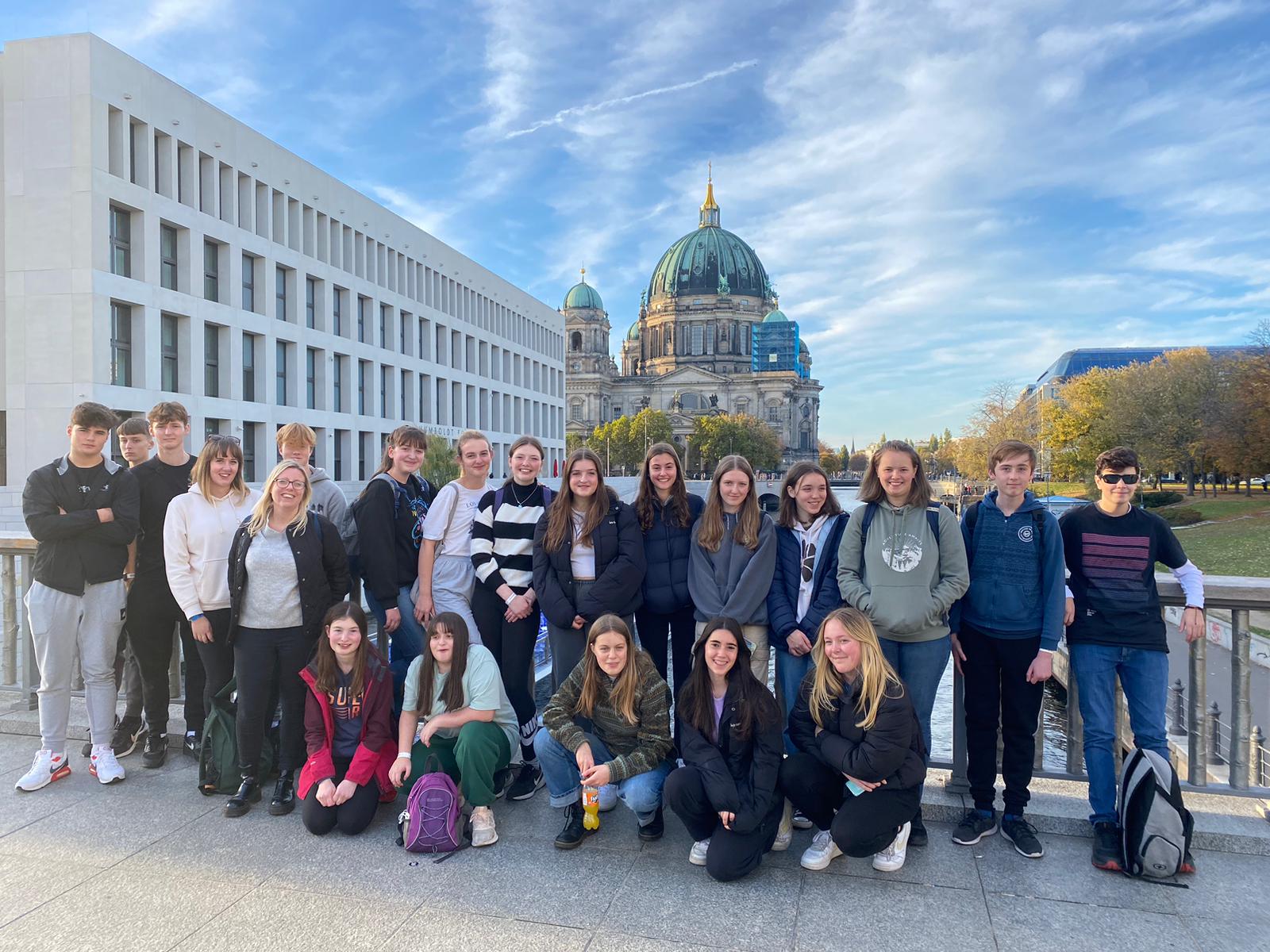 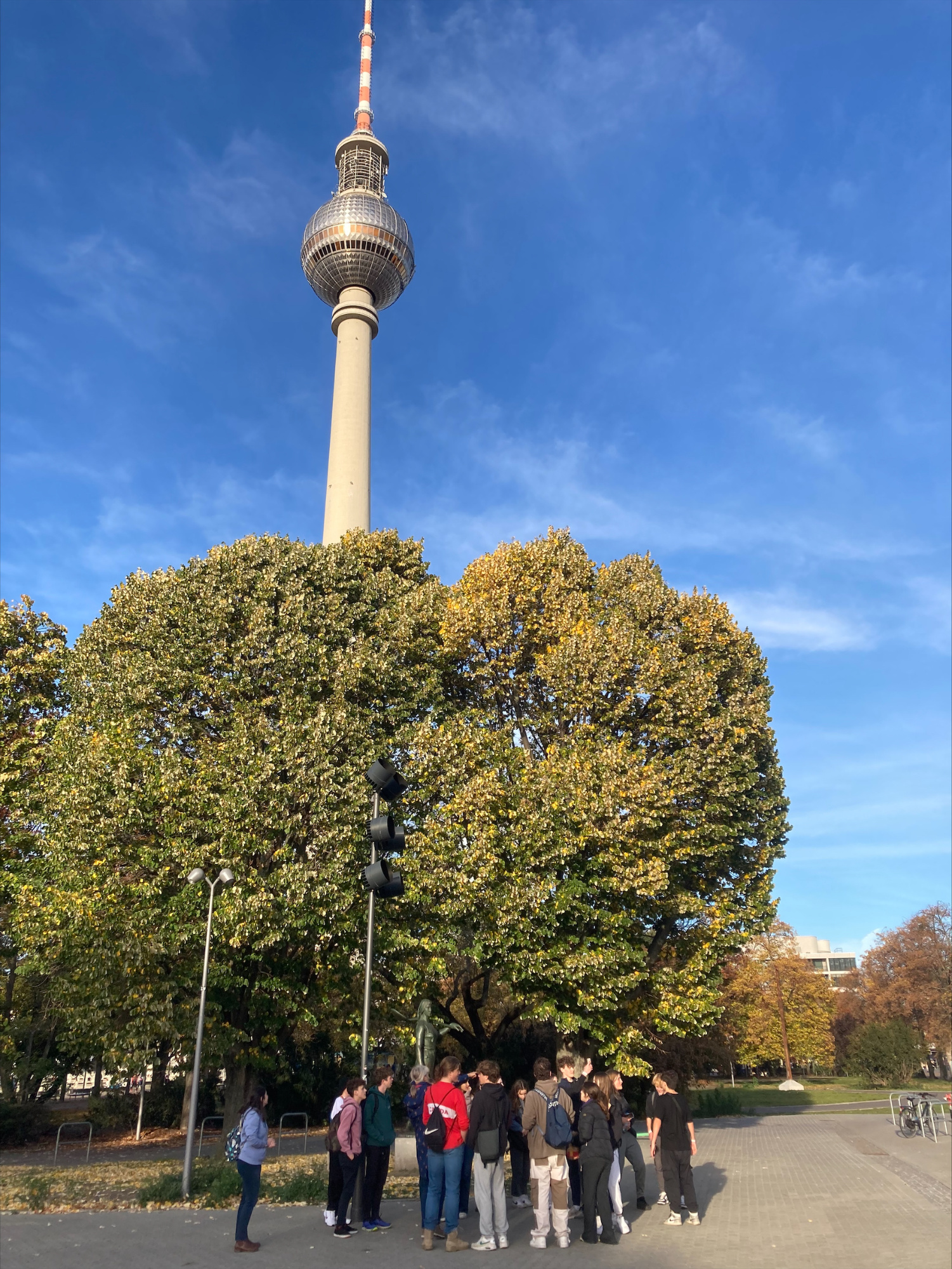 After a much-needed night of rest, our pupils were up and ready early on Friday for another busy day exploring the capital of Germany. Pupils walked to Checkpoint Charlie before splitting into two groups to visit the Topography of Terror and the German Spy Museum. At the former, pupils were involved in a source skills masterclass on the site which had previously been the headquarters for the Gestapo and SS, the Nazi’s secret police and security service. All the tour guides commented on the maturity displayed by our pupils as well as their engagement and participation. During their self-guided tour around the German Spy Museum, pupils were able to explore the role of Berlin as the spy capital of the world. Case studies of famous spies and the history of espionage were all covered through the interactive museum, with the laser maze being a highlight!

After some free time in the Mall of Berlin, the party regrouped and explored some key sights in the West of the city, including the Memorial to the Murdered Jews of Europe, aka Holocaust Memorial, the Sinti-und-Roma Denkmal, memorial to the Roma and Sinti people, and the Brandenburg Tor, before having the opportunity to explore the Reichstag Dome with an audio guided tour. A walk along Unter-den-Linden, with a stop at a chocolate shop, followed and we made our way back to the hotel with some very tired feet amongst the group. 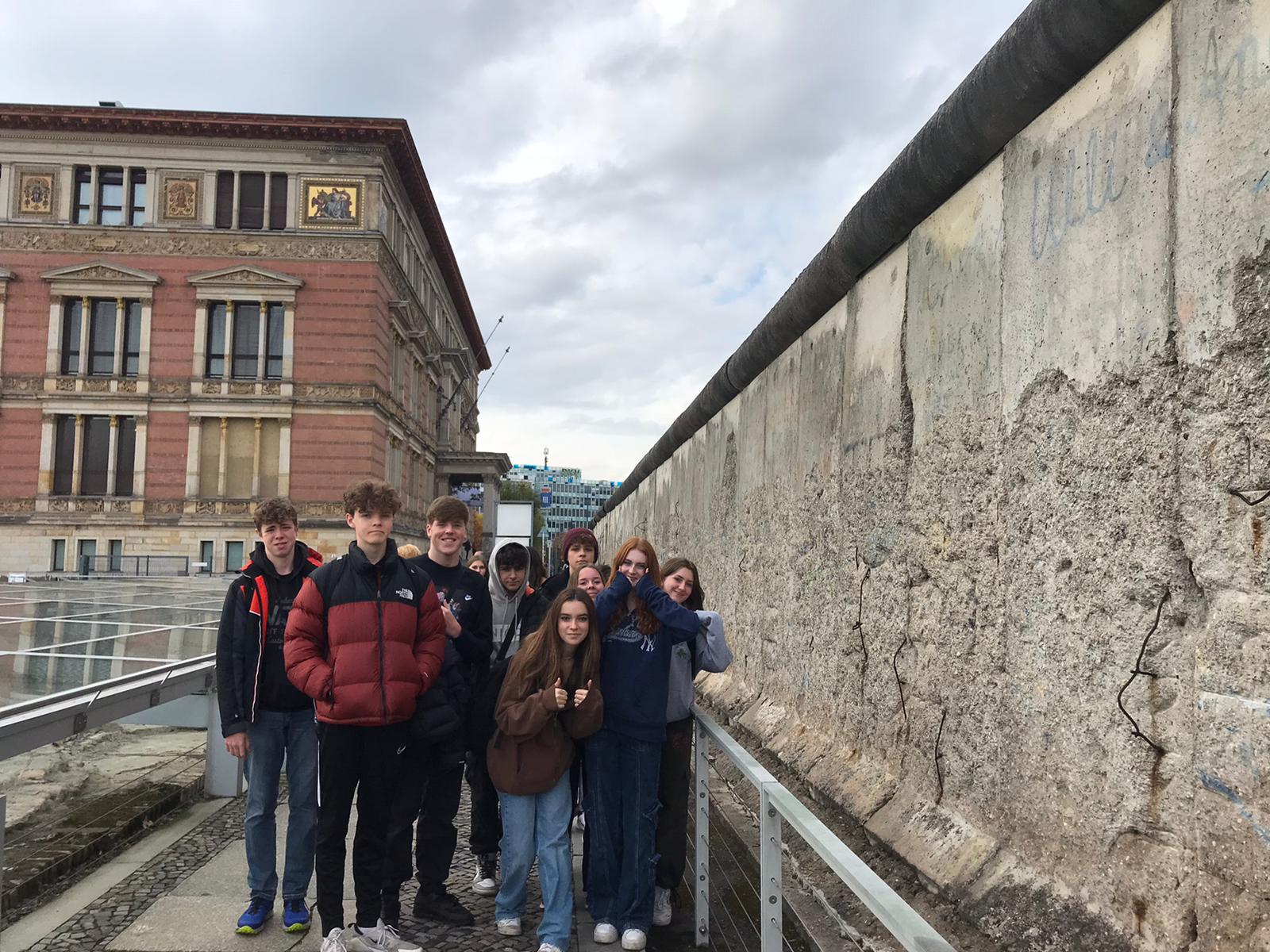 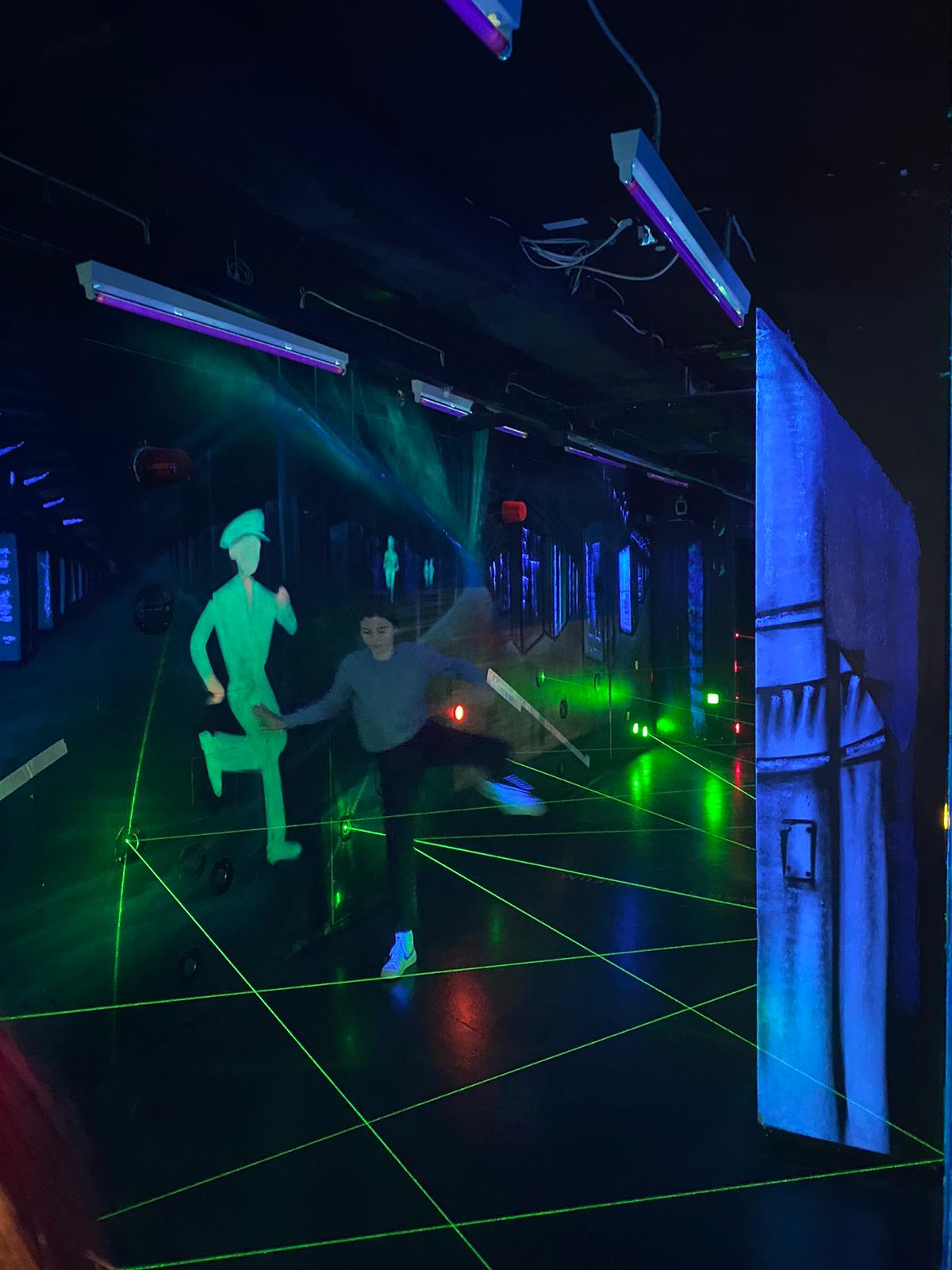 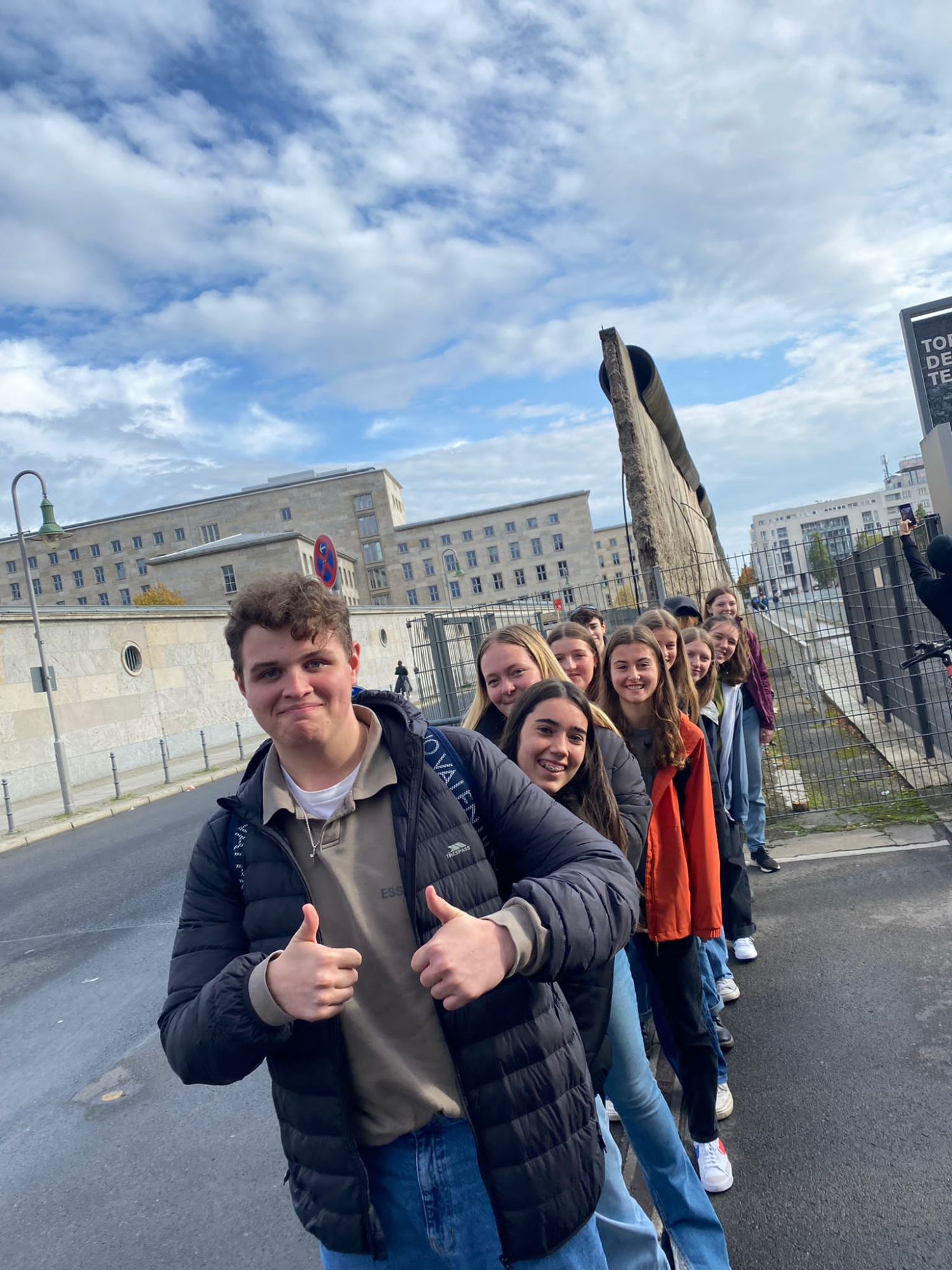 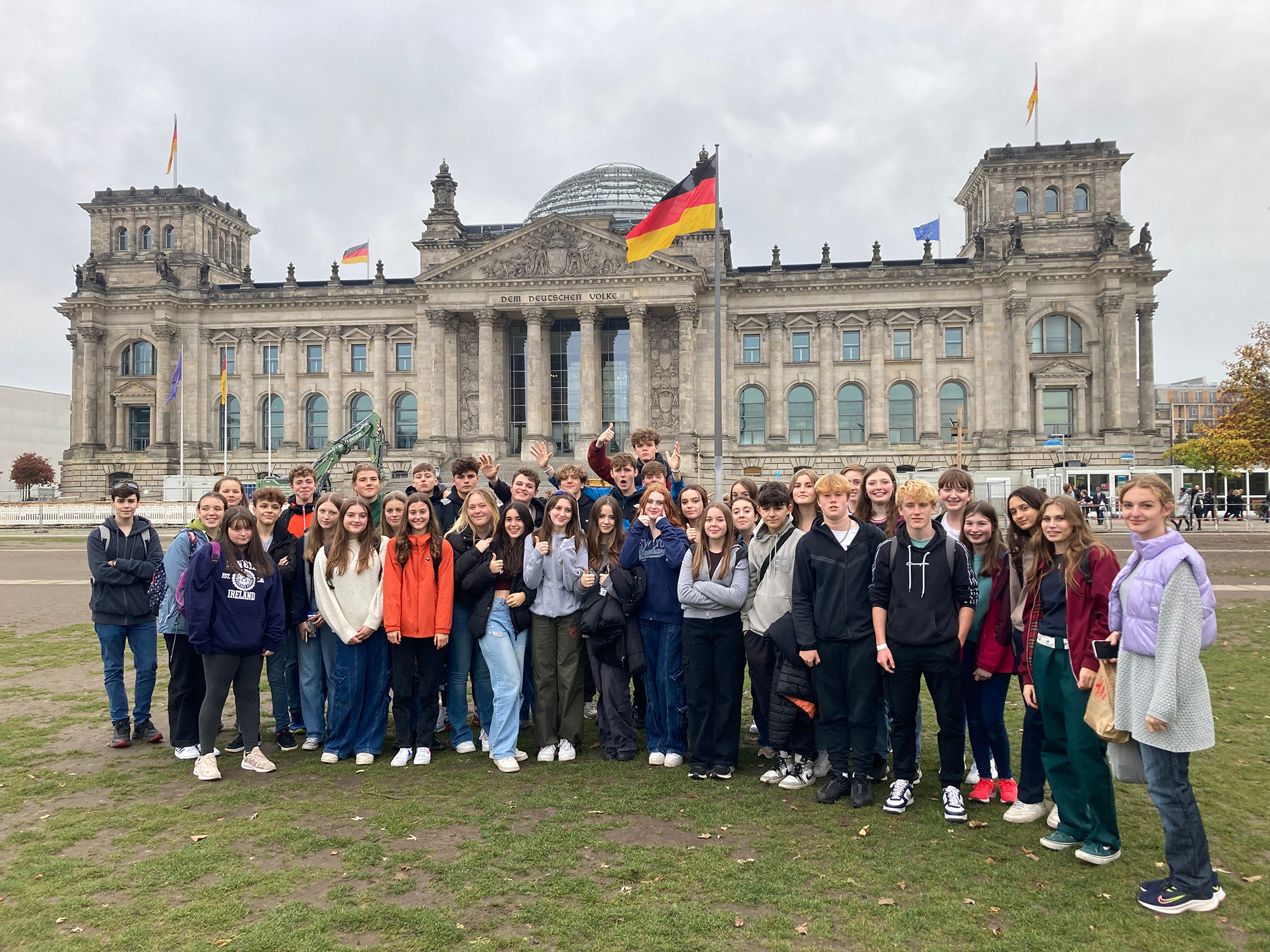 Saturday morning began with a leisurely breakfast before boarding our coach to the Open-Air-Ausstellung "Revolution und Mauerfall" and Stasi Museum. Pupils had the opportunity to explore an interactive display on the fall of the Berlin Wall before a self-guided tour of the Stasi Museum, where they discovered how the Stasi monitored the population of East Germany and found out about the fall of the secret police.

On Saturday afternoon we travelled to Sachsenhausen Concentration Camp where pupils were able to discover more about the conditions of the camp and discover the stories of some people held there during WW2. Primarily political prisoners, they included Stalin’s son and Martin Niemöller, a famous member of the opposition to the Nazis and co-founder of the Confessing Church, an organisation that undermined Hitler’s own Reich Church.

Over 30,000 people perished at Sachsenhausen and it was an emotional day for us all. All pupils showed tremendous respect for the memorial and were a credit to the school. Through the visit they deepened their understanding of persecution of minorities at the hands of the Nazis and the importance of Holocaust education.

To end our tour, we visited the DDR Museum on Sunday morning. This was an opportunity for pupils to find out more about life in Communist East Germany during the Cold War. The former East Germany was known as the DDR, Deutsche Demokratische Republik. The group had free rein to enjoy the interactive displays, including a drive in a Trabant (car) simulator and the opportunity to see inside a typical apartment (including the rather terrifying lift journey), and even to dress up in typical East German outfits. 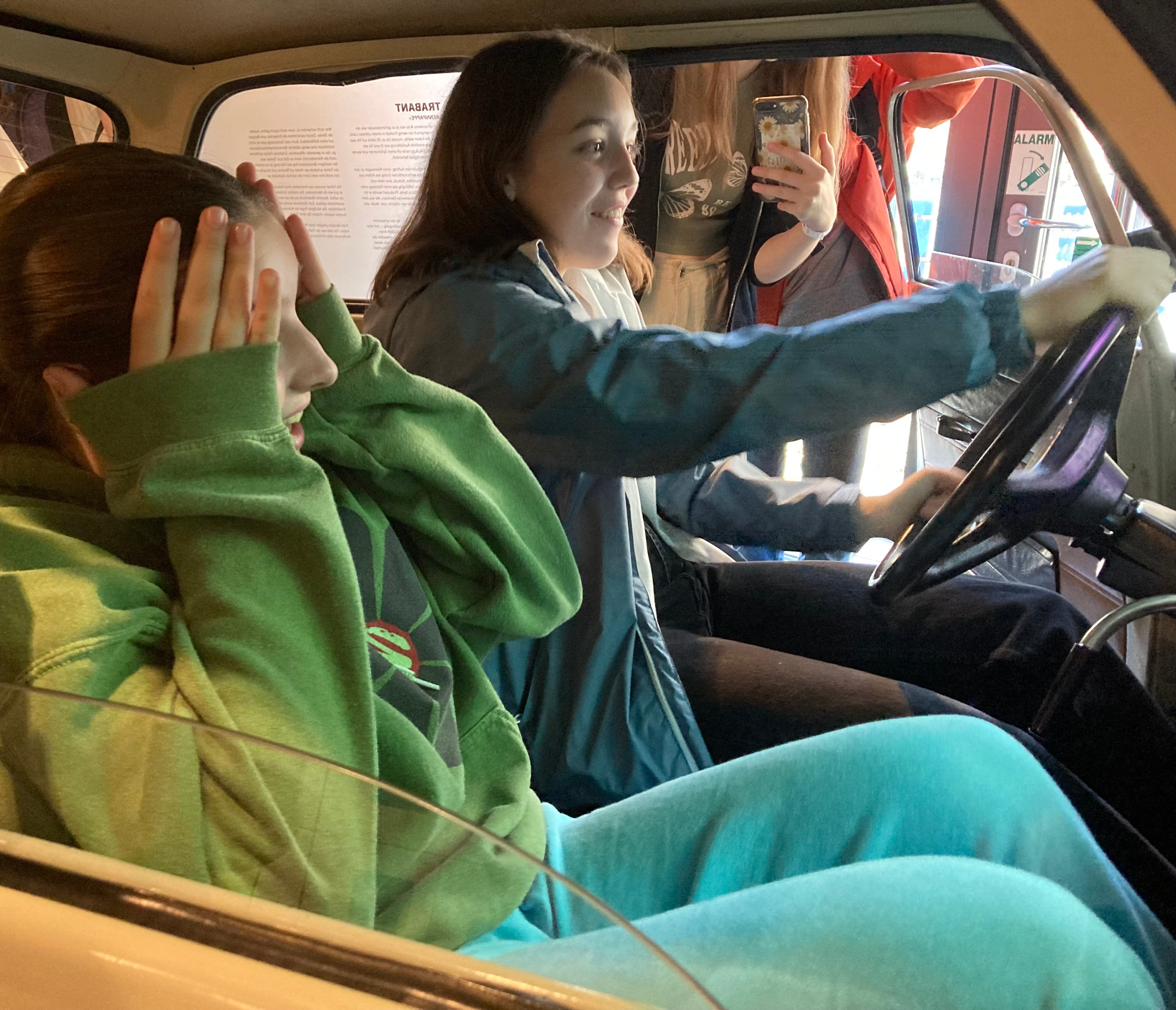 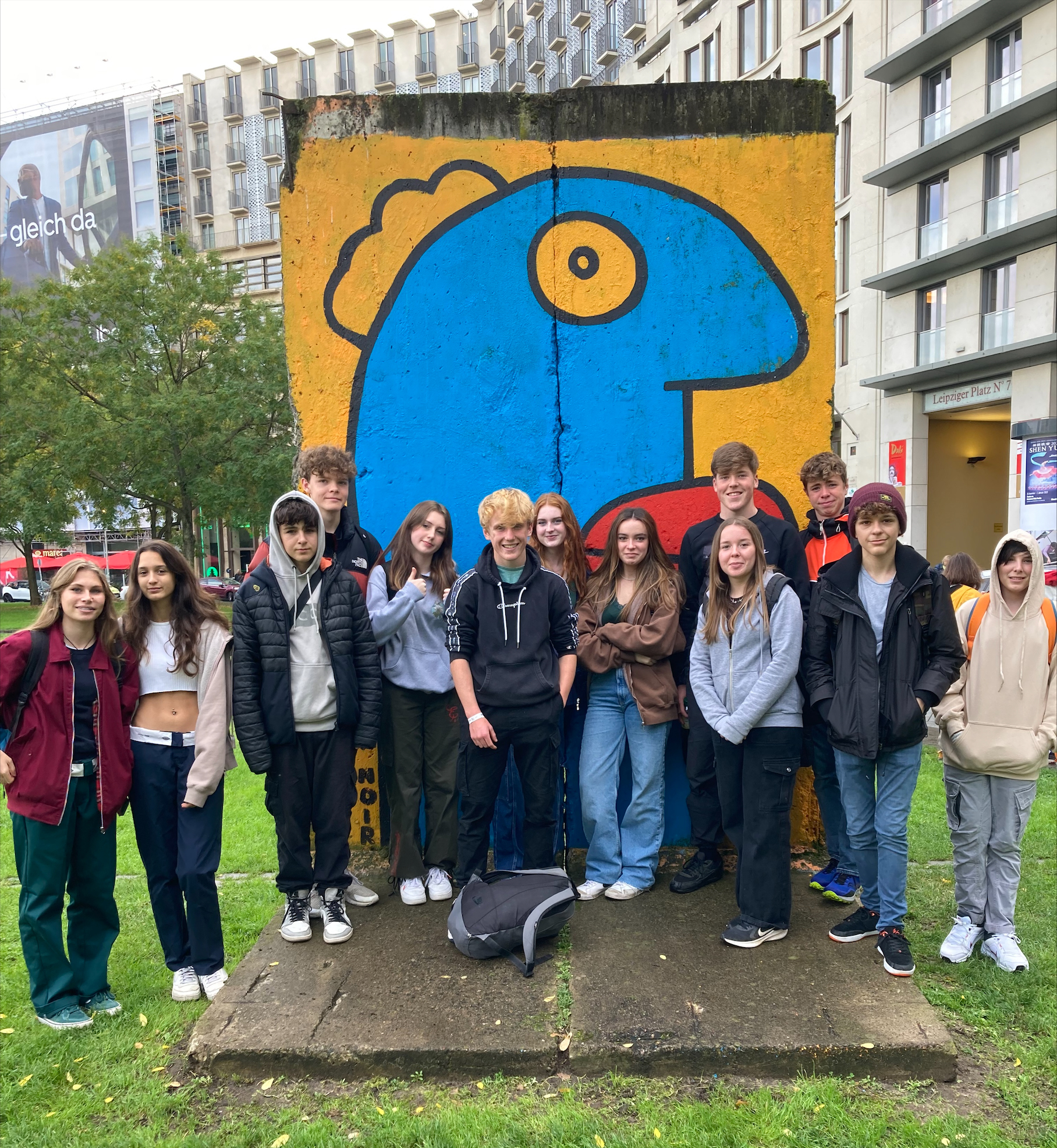 Following a final walk through the heart of East Berlin, we arrived at the open-air East Side Gallery. This allowed us the chance for some spectacular photographs before we boarded our coach to the airport and began the journey home. Throughout this whistle-stop tour, our pupils were fantastic and displayed exceptional levels of maturity. We cannot wait for our next trip to Berlin in October 2023.

Mr Ferne, Head of Humanities and trip leader, commented: "Throughout the course of the four days, the pupils and staff were a credit to Deer Park. The maturity, focus and independence shown was exceptional and they have enhanced their understanding tenfold. It was a pleasure to lead the trip and to work with such outstanding young people."

"I have really enjoyed the trip. My favourite part was the Reichstag tour - I found the view very good and the audio guide really informative." Arabella

"Absolutely amazing. We had a phenomenal time. We are so lucky to have such wonderful teachers. Thank you very much!" Kay and Emma

"An inspiring, picturesque and at times moving time. I highly recommend the trip!" Dan

"Berlin was an eye-opening experience. Our time there was incredible, both because of the bonding with our classmates and the historical sights we visited and the new perspective we gained on the events we have studied. It was an amazing experience and one we'll never forget!" Katie and Edna

"The trip was amazing, fun and informative. The teachers were absolutely awesome!"  Bradley

"One exciting new experience to another across the four days. A brilliant trip!" Charley

"This trip was amazing! I made so many memories and learnt so much in a fun way! Would I recommend? Yes!!" Bella

"We were really impressed with the pupils during the trip. The level of maturity shown demonstrated their interests in the history of Berlin, particularly at the concentration camp. It was great to see the pupils having fun together, looking out for each other and making memories that they will treasure once they leave Deer Park next summer." Miss Perry, History Teacher