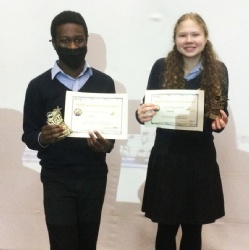 Young Musicians of the Year

On Wednesday 1 December 2021, the Expressive Arts faculty held the annual Young Musician of the Year competition. This is an opportunity for our pupils to showcase their musical talents and Mr Cook, Music teacher, was, as ever, hugely impressed by the instrumental skills demonstrated by Deer Park pupils.

Organising Young Musician of the Year in 2021 posed some unique challenges but I was really pleased that the event was able to go ahead before the end of the year. Due to the fluctuating Covid cases in the school and the regulations in place at the time, the difficult decision was made to postpone the evening concert both in the Summer term and the early Autumn term.

But it was third time lucky in December. Although we were unable to have parents in school as an in-person audience, we live streamed the concert using MS Teams, so that families were able to watch the performances from the comfort of their own homes. Despite now being fairly adept at using this broadcasting technology, and having used Teams to broadcast quite a few events over the last year, this always adds a bit extra pressure and 40 minutes before we were due to start the event, we were having some sound issues which fortunately we were able to sort!

One of the parents watching the event at home commented: 'My husband and I would just like to express our thanks to yourself and team in arranging the wonderful Young Musician event last night. All the children played superbly and with passion, just a joy to watch. Well done all.'

As part of my welcome to parents, I explained that pupils are split into two categories for the competition, Key Stage 3 and Key Stage 4, and that the judges were looking for the musicality of the performance and decisions were not just based on who chose to tackle the hardest piece.

The judging team was made up of myself, Miss Faux (Music Teacher) and Jaden Chandanam. Jaden is a former pupil who was previously successful in our Young Musician competition and was heavily involved in all the various musical events that the Expressive Arts Faculty put on whilst he was at Deer Park. He said about being invited back to be a judge: 'Thank you for inviting me to judge the Young Musician competition. I really enjoyed it, it doesn’t seem like long ago that I was sat where the performers are now. I thought the quality of the performances this evening was outstanding and could really hear, in the music, how hard the pupils have worked to prepare their performances. There is definitely some promising talent coming though the school.'

After a wonderful evening of performances, the judges left to discuss the merits of each performance and decide who should receive awards. This always a difficult task, but after some debate we arrived at our final decisions.

The judges decided to award a winner and two special recognition awards in both Key Stages. I would like to congratulate the following pupils on their successes:

Special Recognition awards went to Noah D and George B, who are both in Year 8.

The Overall Winner in Key Stage 3 was Year 9 pupil, Eleena P, who commented: 'I didn’t expect to win but am very happy to display my trophy on my shelf. I have recently done my Flute Grade 6 exam and achieved a Merit, so choose to perform one of my exam pieces which I have been working on for more than a year.'

The Key Stage 4 Overall Winner was Nigel B (Year 10). Nigel commented: 'Even though it was unexpected, it was very exciting to have won. I did a lot of practising, it certainly paid off and my piece was fun to perform. It was also very enjoyable to listen to all the other beautiful pieces.' 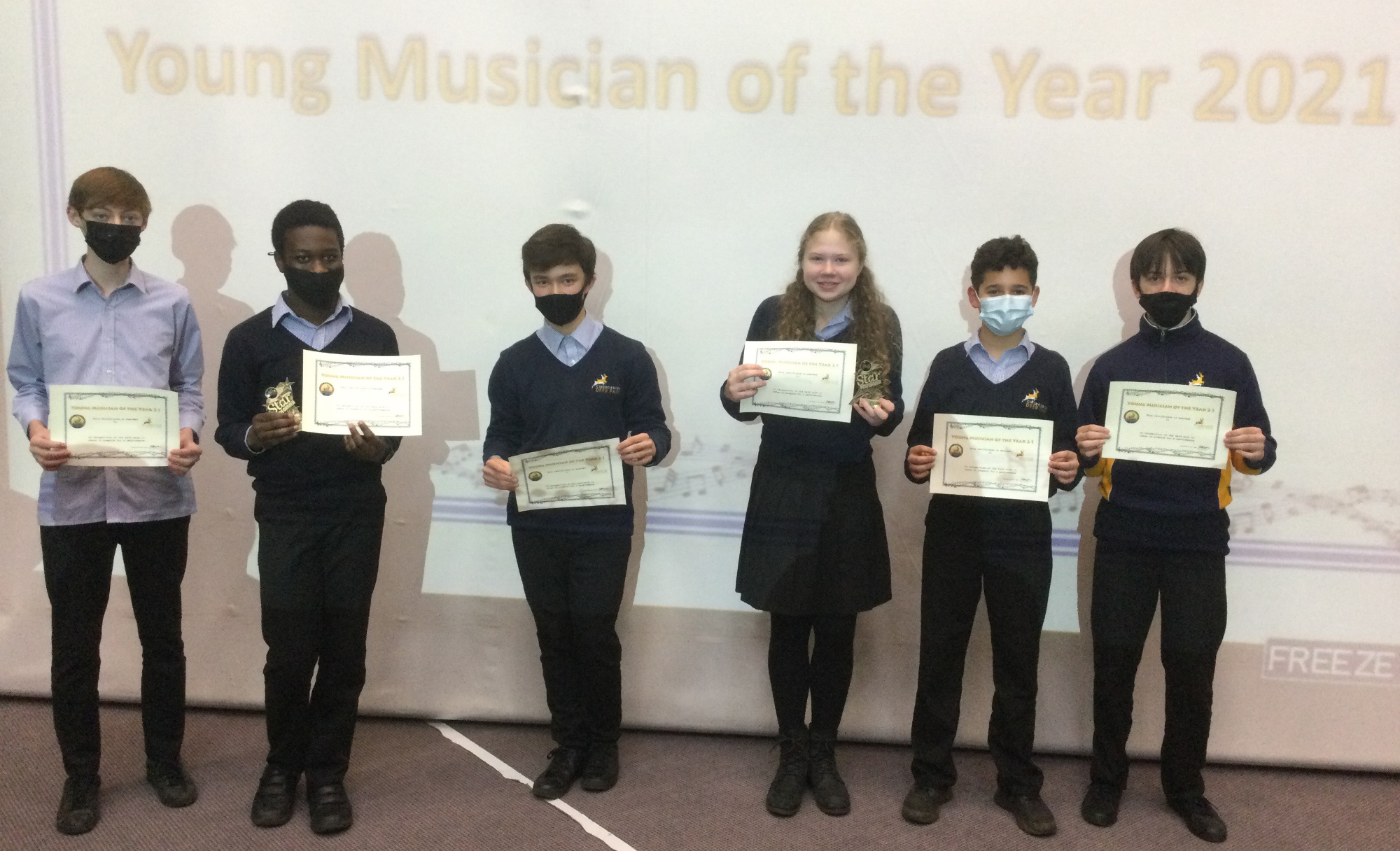 There were number of Year 7 pupils who entered this year. This was the first time they were involved in the Young Musician competition so the judges felt it was important recognise their contributions and announced two additional awards for showing a great amount of promise. These were awarded to Freya W and Harry S who both played with a great deal of confidence.

Freya said: 'I enjoyed taking part in the Young Musician competition. It was good to hear all the other performers, I was a little worried because they were so accomplished. I was pleased with my own performance and happy that I received a special mention.'

Mr Bellamy, Assistant Head, commented 'It was a really pleasant evening. The pupils played with aplomb and demonstrated a huge amount of resilience performing live, albeit virtually. Well done to the Team for rearranging the event several times to allow the pupils to shine. It was great to welcome Jayden back as a guest judge. Well done to both overall winners.' 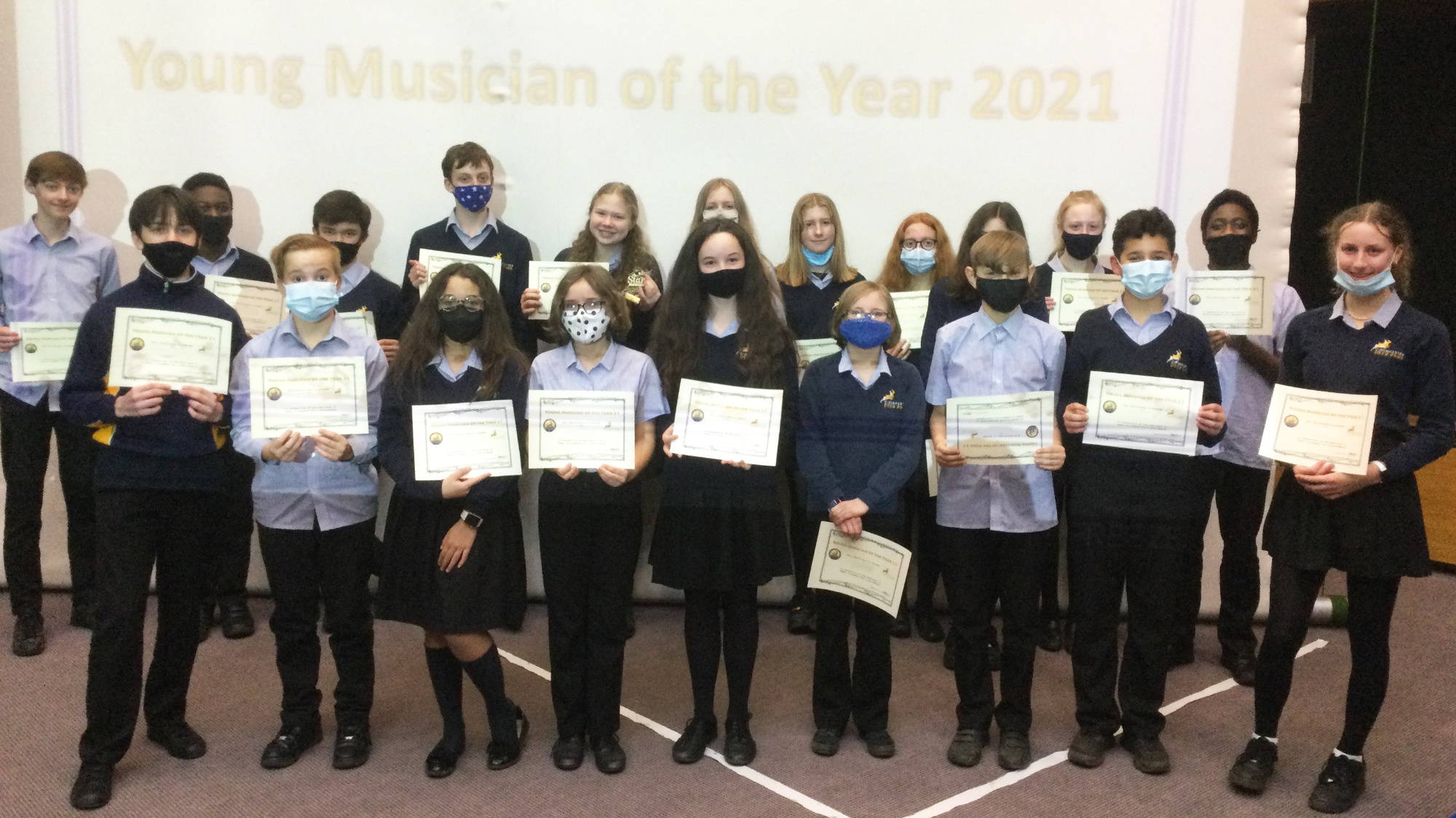 Congratulation to all the performers who made a wonderful evening of music.