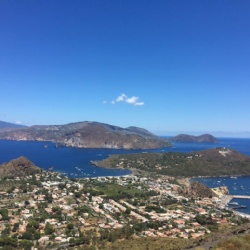 An amazing Geography field trip to Sicily during Enrichment Week.

At 01:30 on Monday 3 July, Mrs Buckley, Miss Lillington, Mr Ferne and 32 pupils from Cirencester Deer Park School's (new) Year 11 and Class of 2017 boarded the Alex Cars coach to begin their Sicilian Enrichment adventure. After a simple transfer via Bristol airport, we arrived in Catania, on the east coast of Sicily, just before lunchtime. On arrival, we met a person who was to become a true hero of the trip, Bruno, our immaculately dressed bus driver. 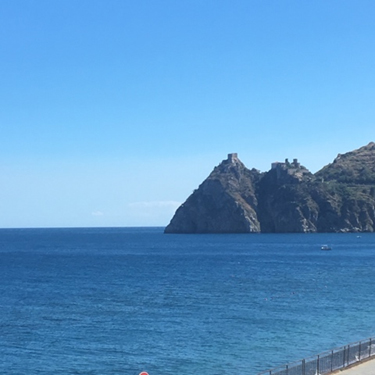 Our first stop was at Giardini Naxos, the first colony founded in Sicily in the eighth century. Here we were introduced to our first guide, Marta, and learnt all about the history of the area as we walked around the excavations of ancient Naxos. After a gelato in Naxos, we completed the transfer to our residence for the week Hotel Kennedy, in Saint’Alesso Siculo. As you can see, the views from the hotel were ‘bellissimo’ and we spent the rest of the evening relaxing on the beach and swimming in the refreshing waters of the Mediterranean.

A physical geographer's dream come true… the day we would explore Europe’s highest volcano: Etna! We travelled the first part by a cable car, with tremendous views of previous lava flows below, and a real insight into the extreme proportions of this epic volcano. Then we boarded 4x4 vehicles and ascended the rugged terrain in true venturesome style. We were guided by a knowledgeable geoscientist, interpreted by another guide, Rosa, who discussed the ferocity of past eruptions and how volatile the volcano has been. All the while smoking in the background, Etna was showing no signs of rest. 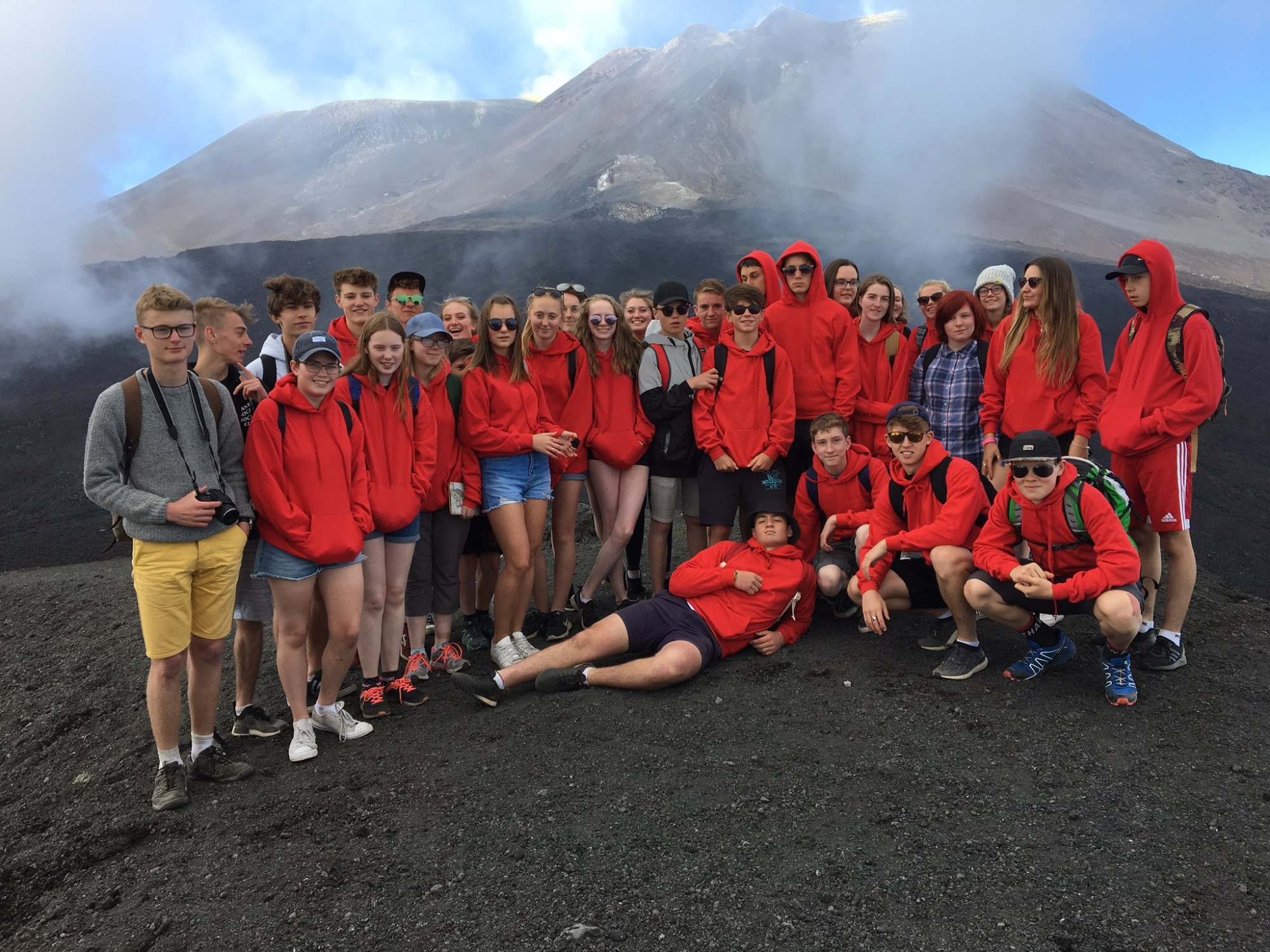 Our driver Bruno and guide Rosa stopped on the descent of Etna, where we were asked to climb through a small cave that didn’t look possible to fit a human in! Equipped with hard hats and torches, we walked through ancient lava tubes and discovered more about the types of lava flows and how these caves had since been utilised by locals for keeping their speciality granites cold in warmer climes. The day ended with a trip to the local museum where pupils were able to take on a kinaesthetic approach to learning about the causes, impacts and responses to Sicily’s volcanic nature.

Of course, no visit to Sicily would be complete just looking at one volcano! On Wednesday we boarded a ferry at Milazzo harbour to explore one of the most significant volcanoes along this destructive plate margin: ‘The Isle of Vulcano’. Did you know, the name ‘Volcano’ originated from this very Aeolian island? Aboard the ferry, we viewed spectacular scenery as we sailed past many characteristic geomorphic features of erosion and also, able to learn about the sustained eruptions at Stromboli, the ‘lighthouse of the Mediterranean’. When we were on more stable terra firma, we met out guide for the day, Carmello, and began our 500 metre hike up the volcano, where we stood overlooking the vast crater, with clear volcanic strata and the ever so strong presence of the sulphur smell. As if our decent was not enough of excitement, our guide allowed us to take a ‘special’ way down. Cue very dusty pupils and staff! We quite literally slid on our feet, as if we were competing in a new sporting event, down the steep flanks of the volcano. Unparalleled enjoyment all round! The day was great, and on the ferry back, the atmosphere was positive and buzzing. 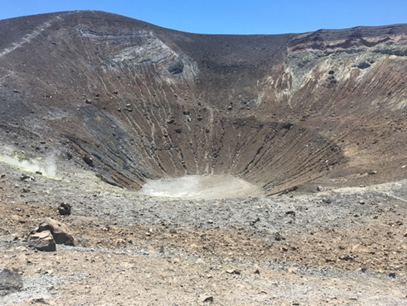 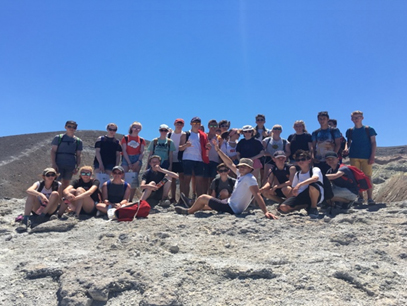 On Thursday, pupils and staff arrived in Stazzo where Mario and his team kitted us out in preparation for snorkelling. The team at Faro Diving Centre were welcoming and great fun. Mario and his team took us out in groups on the speed boats (which was an experience in itself!) and then we were guided along the coastline, where they detailed the significance of the marine ecosystem and volcanic crater that we were swimming in. After lunch and a few photos with Mario and his team, we boarded the bus to visit La Timpa, a Nature Reserve. At first, we learnt about the legend of Odysseus and the cyclops Polyphemus, and then we walked down through the nature reserve. After a swim in the sea and some granita and water it was time to return to Dominco, our new driver. All was well… until we had to walk back up the hill. This was such a challenge, but the Deer Park spirt was strong and pupils stuck together, encouraging one another along the way. 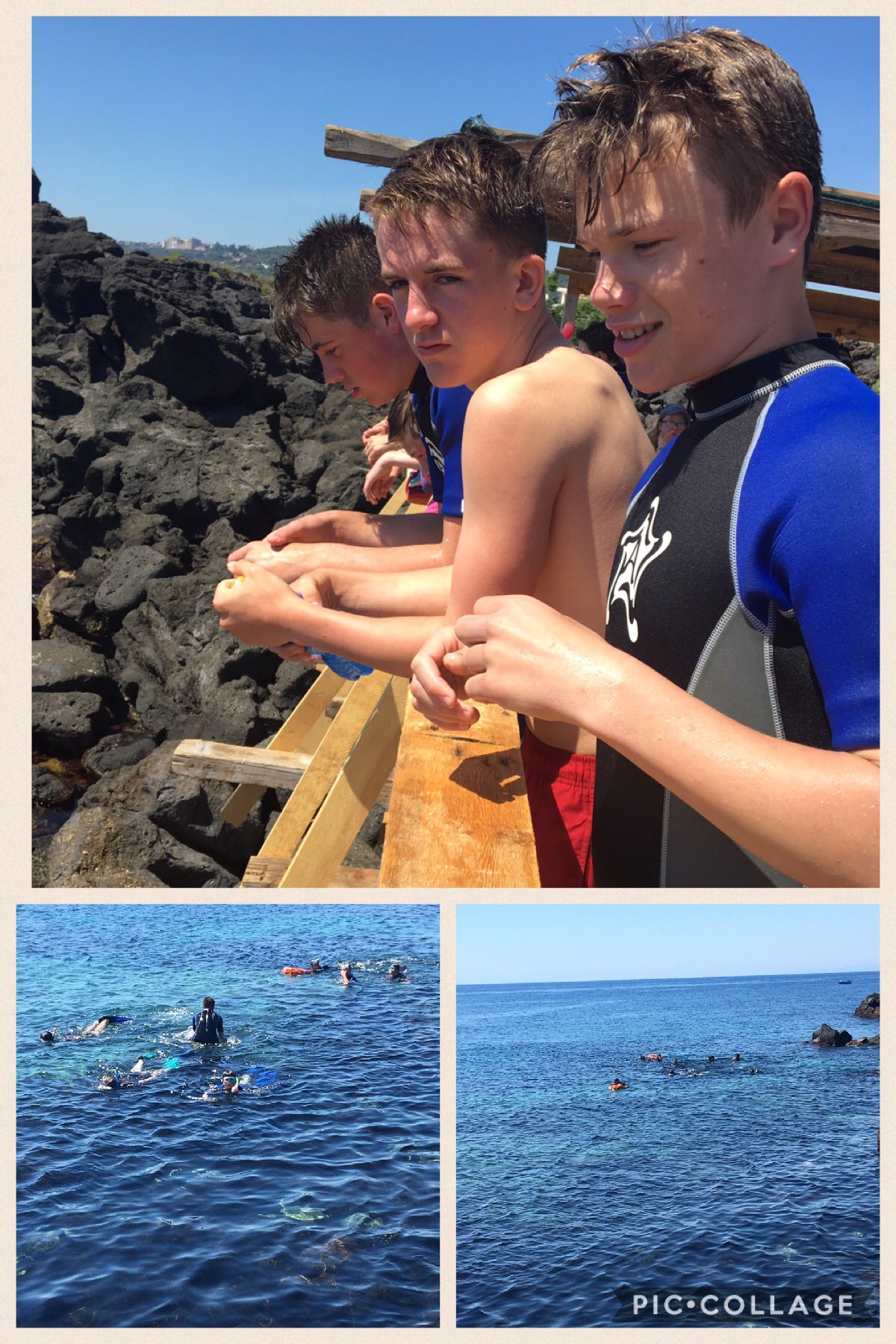 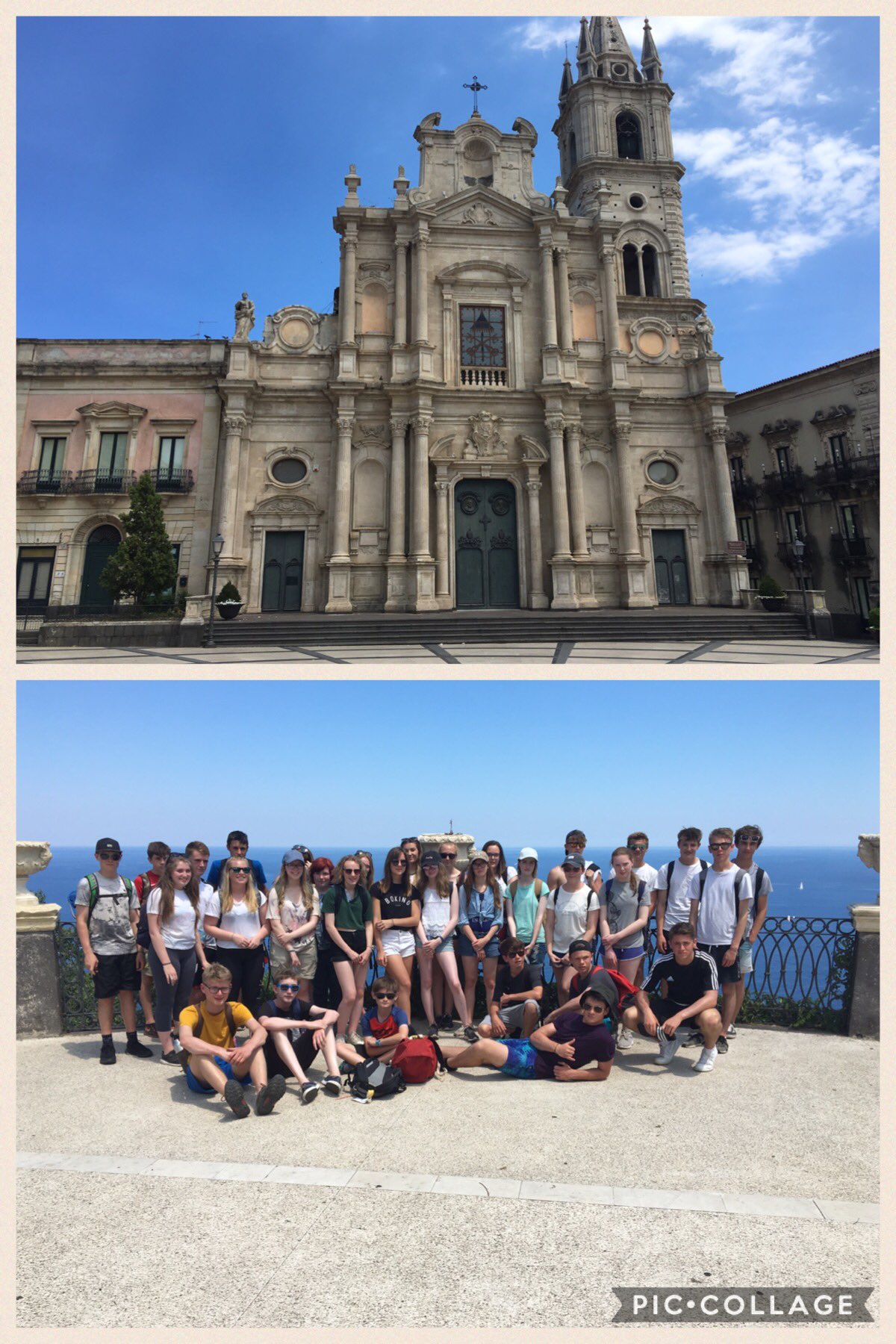 An ancient lava flow once filled the vicinity of our next destination, depositing some unique basaltic columns and steep sided gorge, with crystal clear, ice cold freshwater flowing through it. Of course, this was the famous awe and wonder destination of Alcantara Gorge. After a walk around the grounds to view the botanical gardens, enriched by the volcanic soils, we viewed the geological structures from the base of the gorge and enjoyed a paddle in the shallow water. 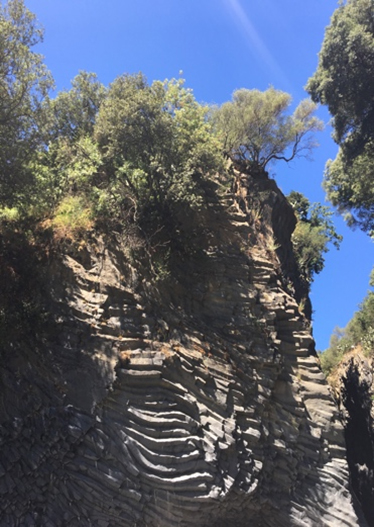 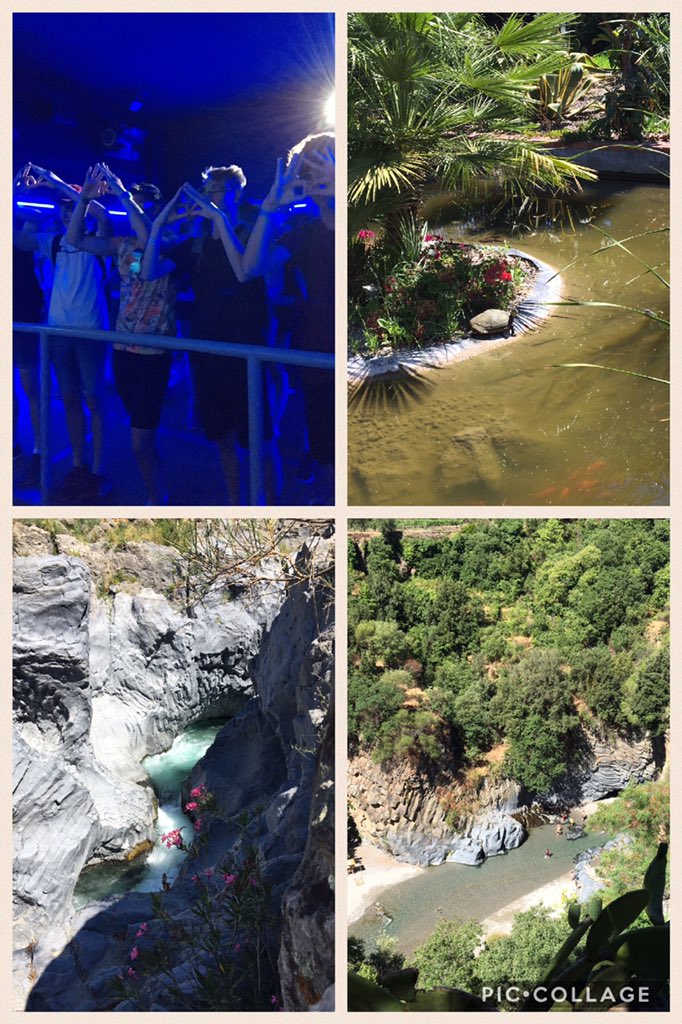 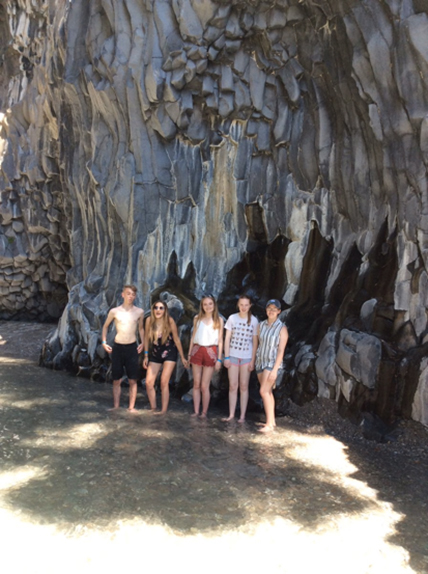 In the afternoon, we travelled to the picturesque town of Taormina, a spectacle of historic interest as we toured the Teatro Antico with our now beloved tour guide, Marta. The panoramic views from the theatre are breath-taking; it is an architectural feat, with doorways that frame Etna and viewpoints over the Bay of Naxos and towards the Straits of Messina. 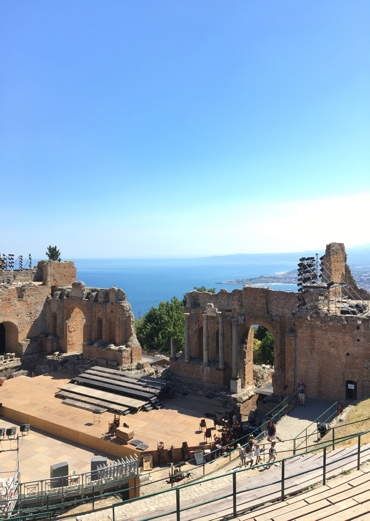 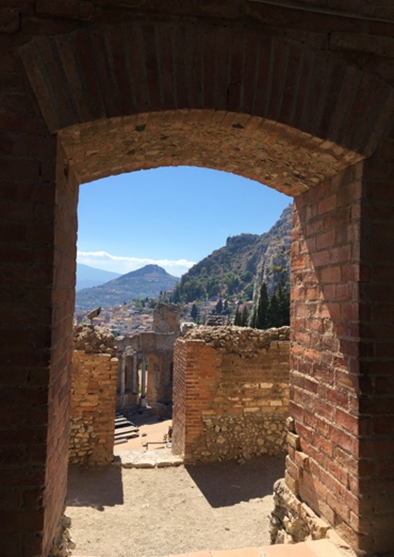 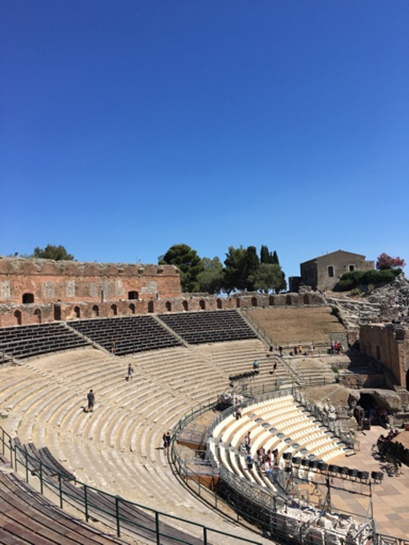 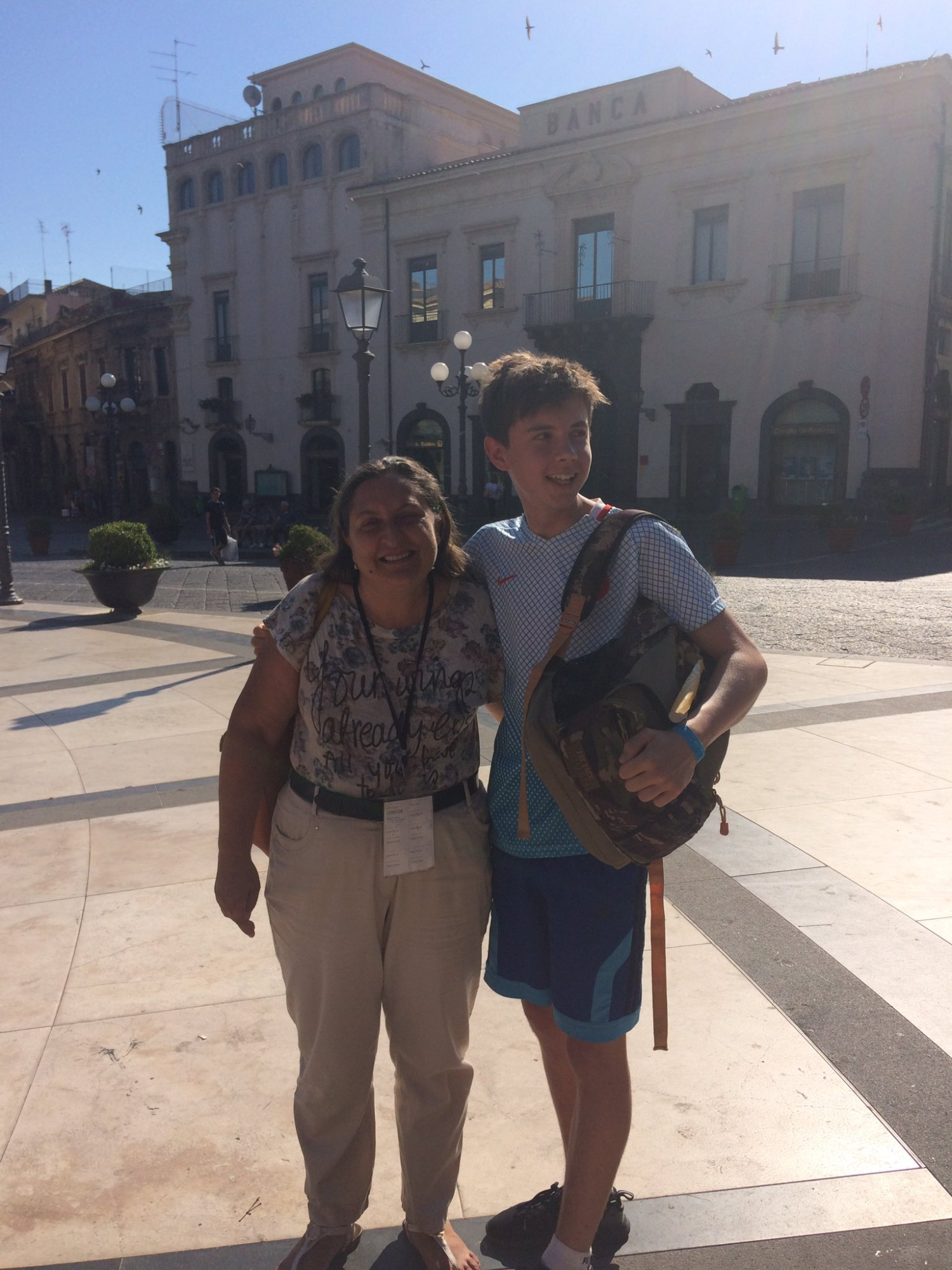 On our final day, Saturday, a lie in at last, pupils were able to sleep in until 08:30! After a continental breakfast, the hotel beach was our penultimate destination. Pupils used this time to play card games, swim and skim stones. A peaceful backdrop following a jam-packed itinerary. At 2pm local time, Dominico picked us up. As we said goodbye to the hotel, the manager commented on the calm nature of our pupils and how wonderful they had been. With the bags on board and rooms vacated, we headed to meet Marta for one last time, this time to visit the Riviera dei Ciclopi, a 12-kilometer long stretch of the coast located north of the beautiful city of Catania that goes from Acireale to Aci Castello.

Finally, we left for the airport at 5pm local time. Unfortunately, our flight was delayed, but our positive pupils did not let this get them down. After what can only be described as an ‘eventful’ flight, we arrived back in the UK and boarded the coach by 2am. The coach was silent as pupils caught up with some much needed sleep.

“Just wanted to say a big thank you for organising such a fantastic trip to Sicily! Jack had an amazing time and can't stop talking about the fabulous experiences and beautiful scenery as well as the snorkelling, food, games etc. and he has said that both the kids and staff were brilliant! We really appreciate your efforts in making the trip so memorable for everyone.” Parents

“The trip to Sicily was amazing! We learnt so much about the geography and history of the areas we visited and all the activities were so fun.” JJ (new Year 11)

“Thank you Deer Park and the Geography department for planning, arranging and executing an awesome week. Credit to all.” Parent

“Sicily was such a good trip, I enjoyed every day. Alcantara Gorge was the best thing in my opinion, I would definitely recommend the trip. Marta and Bruno made the trip even better.” Luke (new Year 11)

“Sicily was such an amazing experience, I now have a new found love of volcanoes and Mount Etna and its caves have taught me new things that will definitely benefit me as a geographer. I’m so glad I had this opportunity to share so many memories with my friends.” Kate (Class of 2017)

"I would like to thank the 32 pupils that took part in this Enrichment Week trip, they truly are a credit to Deer Park, and displayed resilience and compassion each day. The staff are very proud of them all and hope that they thoroughly enjoyed their experiences. Also, huge thanks to Miss Lillington, Mr Ferne for all of your help – it is much appreciated, you made the trip memorable for the pupils. Thank you." Claire Buckley, trip co-ordinator

Check out @Geografun on Twitter for more videos and photos from the trip.