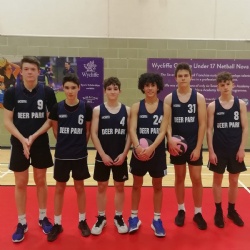 On Tuesday 17 December 2019 our Year 11 Basketball team played in the District Tournament at Wycliffe.

Firstly, we beat Farmors and Maidenhill, which were, on reflection, much easier matches. We also beat an extremely talented Thomas Keble side, where we played our best basketball, being collectively fantastic in attack and defence throughout.

In our game against Archway we were great going forward but our defence was opened up too easily, enabling them to get behind us and attack our basket too often. With scores at 13-11 to Archway we amazingly scored a three-pointer on the whistle which would win the tournament... but it was unfortunately disallowed as the shot came in just too late, ie after the whistle sounded. Seriously unlucky, but congratulations to Archway.

We were so close to being District champions but unfortunately it wasn't to be. Fine margins!  Congratulations to the boys for a great Deer Park performance.

"We were one second away from winning the tournament, which was really unlucky but I'm still really pleased with our team performance throughout the tournament." Tui

"I really enjoyed the step up playing with the Year 11's tonight and felt everyone played really well." Kai