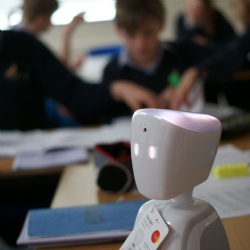 Mrs Davies, Head of English, has a classroom visit from a robot

In February 2019 I was asked if my Year 9 English class would be prepared to take part in an experiment. The Gloucestershire Hospital Education Service is piloting the use of several AV1 robots to connect children who are too unwell to attend school with their classes and teachers so that they can continue their education.

Following consultation with senior staff and our inclusion team, GHES provided one AV1 robot, on loan, to Cirencester Deer Park School and we were asked to trial it in some lessons and I volunteered! I love anything different – in English any robots are usually confined to the pages of a text – so I said yes straight away. I was even more excited when I recently read about the introduction of such robots in classrooms on the BBC News website that week.

The pupils in my class were also excited and we eagerly awaited the Robot’s arrival although we didn’t really know what to expect. Carefully, it was carried into the room and placed on one of the front tables. Although only about 18 inches tall, it looked like a little person, with eyes and a revolving head!

At the time the class were doing some preparation for their Year 9 English exam, focusing particularly on the question which asks them to explore the structure of a text. One pupil had left the classroom to watch the lesson and control the robot via an iPad. She was some distance away in another part of the school. Incredibly, she could control the robot from there, join in with the lesson and even ‘put her hand up’ to answer a question by lighting up the Robot’s head! 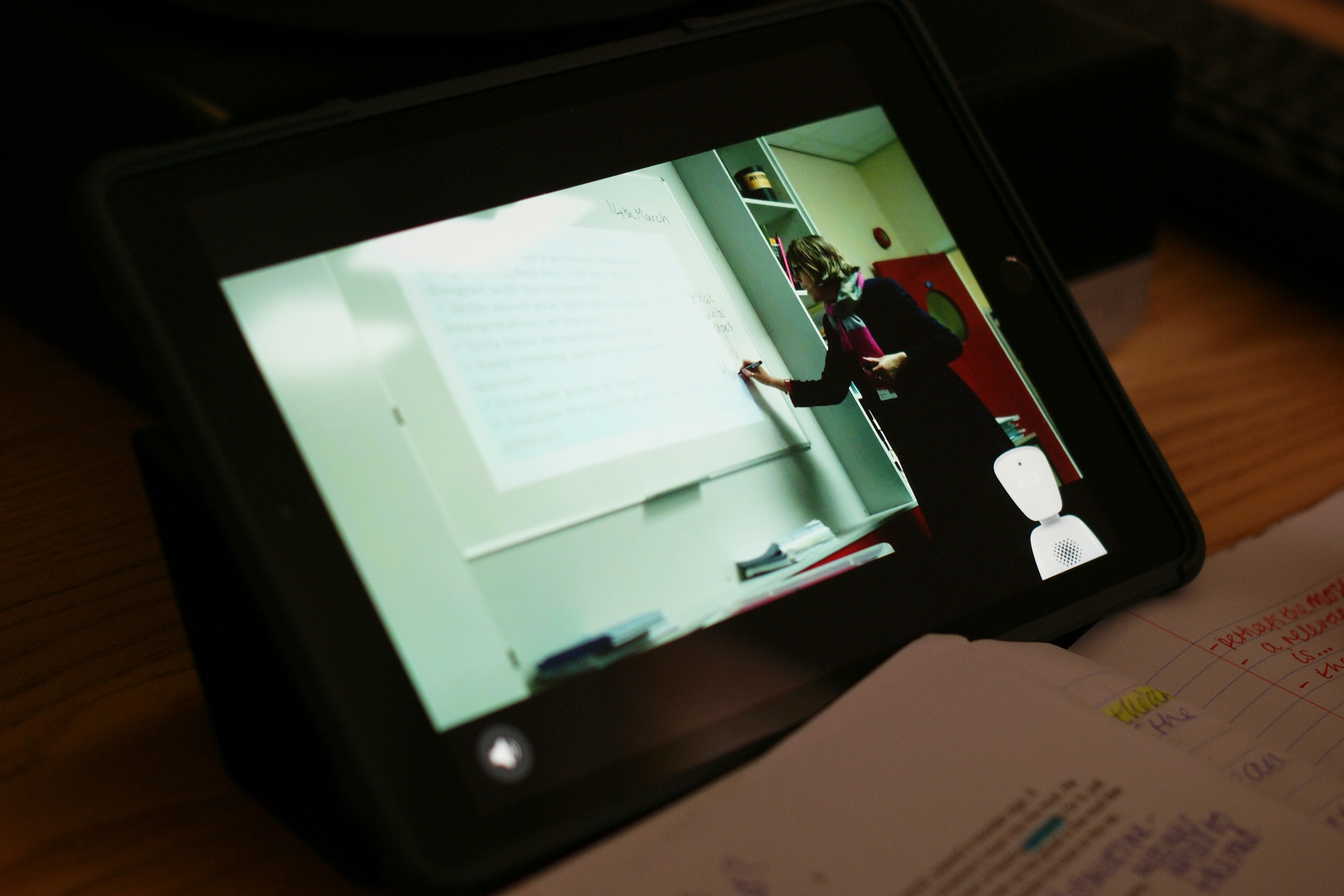 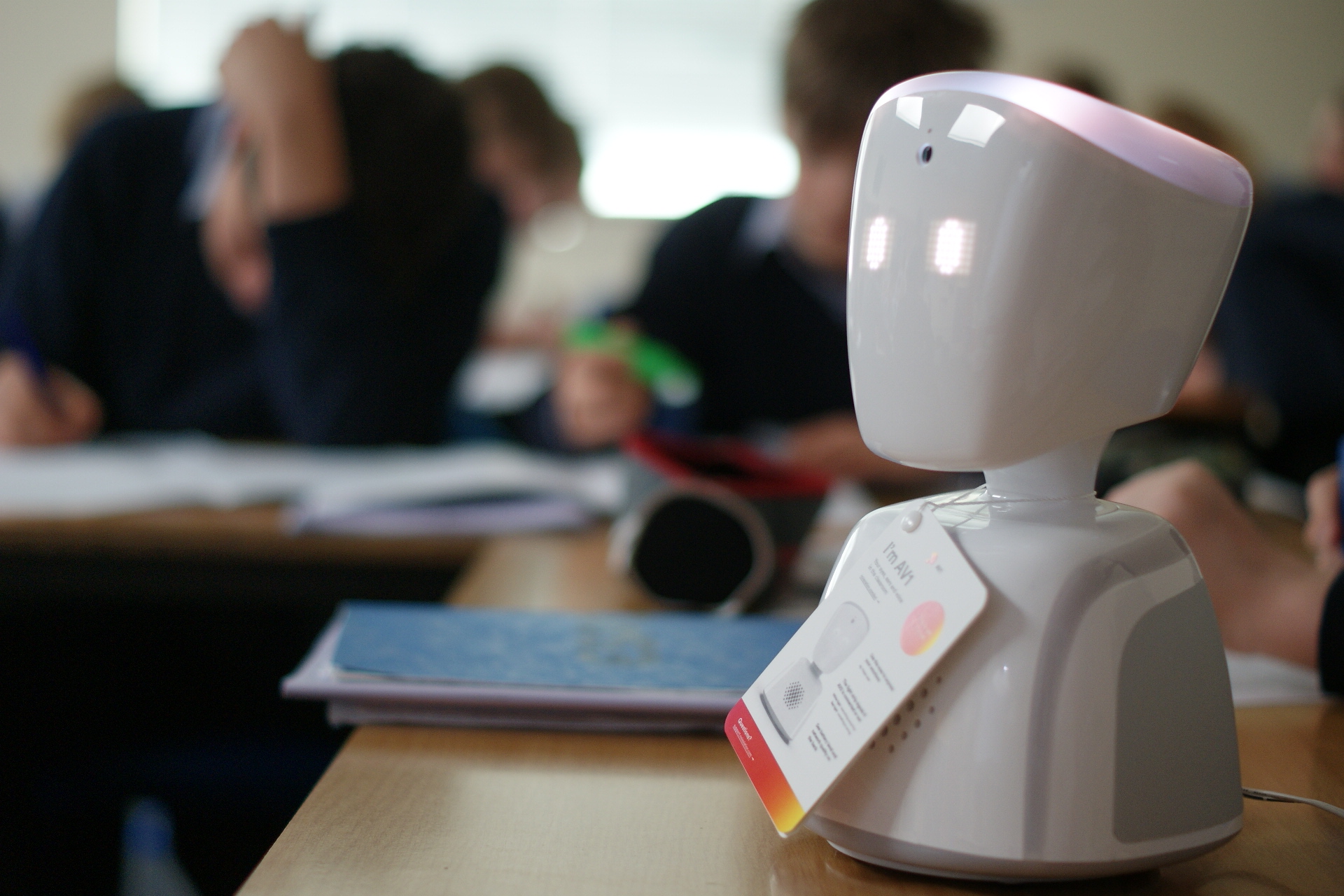 My class and I found it amazing that the absent pupil was able to participate in the lesson to such an extent. She read an extract from the text, answered questions and shared her written answer at the end. Her voice was loud and clear - there was no distortion and no breaks in the sound. We actually felt as if she was in the room with us!

‘Using the robot was a brilliant experience. I think it could really help others not in school. It was great fun too!’ Floss (Year 9)

Whilst the Robot generated a lot of interest at the beginning and the pupils were very enthusiastic about it, I do think that were it to be in every lesson, it would be really unobtrusive and no-one would take any notice of it - it certainly didn't get in any one's way. I actually liked having it there - I felt rather affectionate towards it; it really was like having a little person as part of the class and it seemed like I was talking to the absent pupil when I spoke to it.

At the end of the lesson there was some time for the pupils to ask what the experience was like from the absent pupil’s end; they were really interested in how she controlled the Robot and how much she could see in the classroom. She demonstrated the range and all the pupils gave her a wave!

This Robot’s visit generated a lot of interesting discussion and questions, for example, one day would you be able to just send your Robot to school whilst you stayed at home? Could a teacher ever be replaced by a Robot?

Deer Park is an inclusive school and I was delighted Gloucestershire Hospital Education Service invited us to take part in this innovative pilot. Our pupils are fascinated by new technologies and very supportive of their peers.

"Personally, I think the robot is a fantastic idea; a great way in educating people who can't get to school. Hope it works." Hugo (Year 9)

"It was cool having the robot in class. I thought it worked really well and it was super easy to talk with Floss through it. It was great." Clara (Year 9)