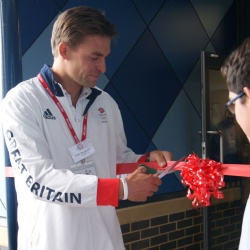 We were all delighted to welcome Peter Reed, OBE, back to the school to officially open our new flagship building which now houses our English, Computer Science and Religious Philosophy faculties. This event took place in the afternoon alongside the formal launch of The Corinium Education Trust of which Deer Park is one of the founding members.

In front of an audience of pupils, staff and invited guests, Peter was invited to cut the red ribbon by Chiquita Henson, Headteacher and CEO of The Corinium Education Trust, and, in commemoration of his visit and outstanding achievements, to unveil a special plaque in the foyer.

In his short speech, Peter reflected on the value of his comprehensive education and how much he had enjoyed his time at Deer Park. He said it was a privilege to be invited back and showed tremendous humility in accepting the school’s invitation to open the new classroom suite. He was touched that we had also chosen to fly the Olympic flag in his honour. 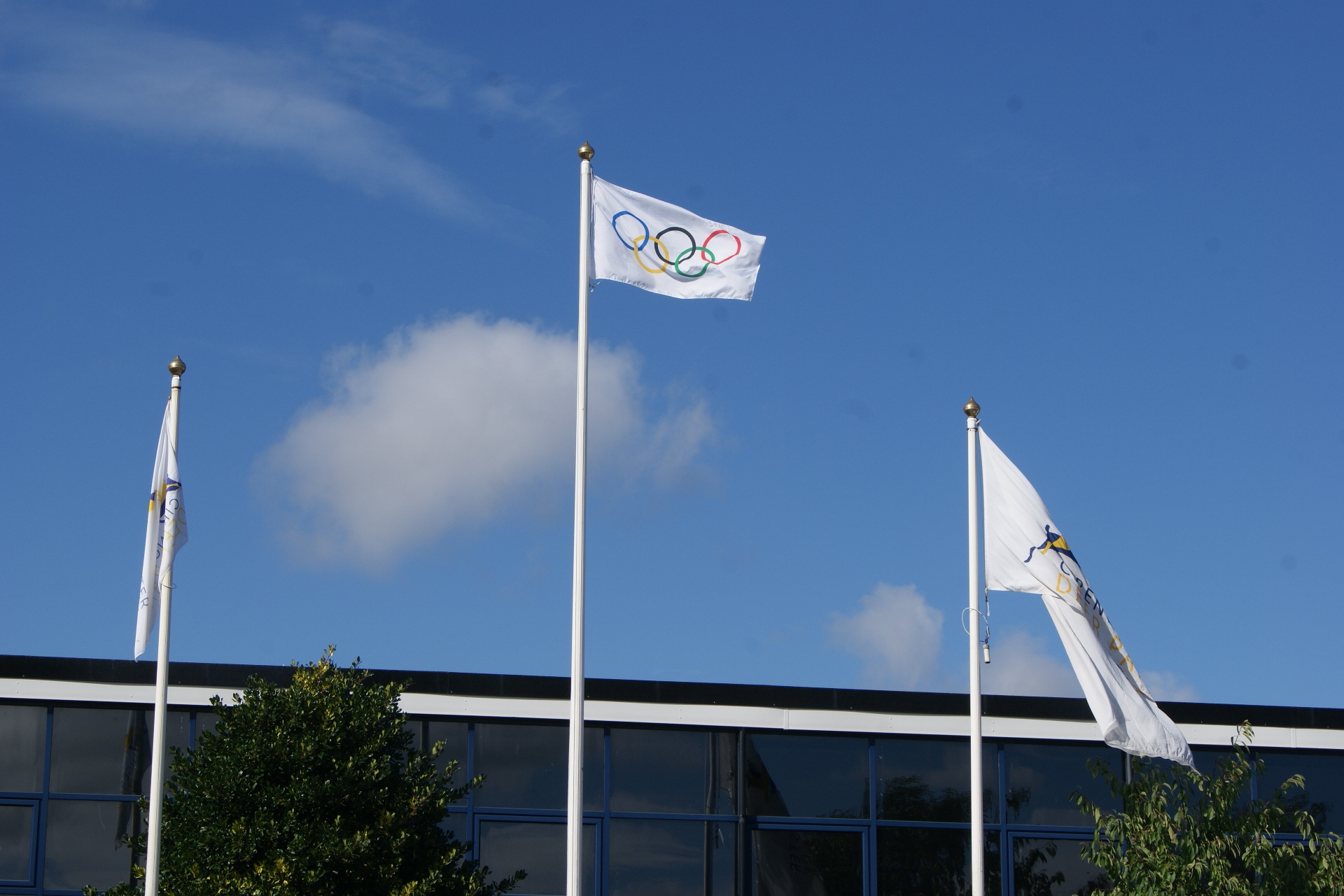 As one of the school’s former pupils, Peter Reed, a three times Olympic gold medallist, provided inspiration. Arriving on a motorbike, one of his new passions, his visit created quite a stir and there was much excitement around the school. Before the formal ceremony, chaperoned by Miss Brace, Assistant Head, Peter was introduced to our Games Captains in Years 10 and 11 with whom he shared stories and cake! He also toured Year 7 lessons. He reflected on his achievements and commitment to a rigorous training regime and allowed pupils to hold his gold medals. However, as an active role model, his consistent and encouraging message to all pupils was ‘work hard’ and ‘be kind.’

‘It was lovely to meet Peter again and welcome him back to Deer Park. I am extremely grateful to him for the time he spent with our pupils and his generosity of spirit. On behalf of the school, I wish him all the very best in the future.’ Chiquita Henson 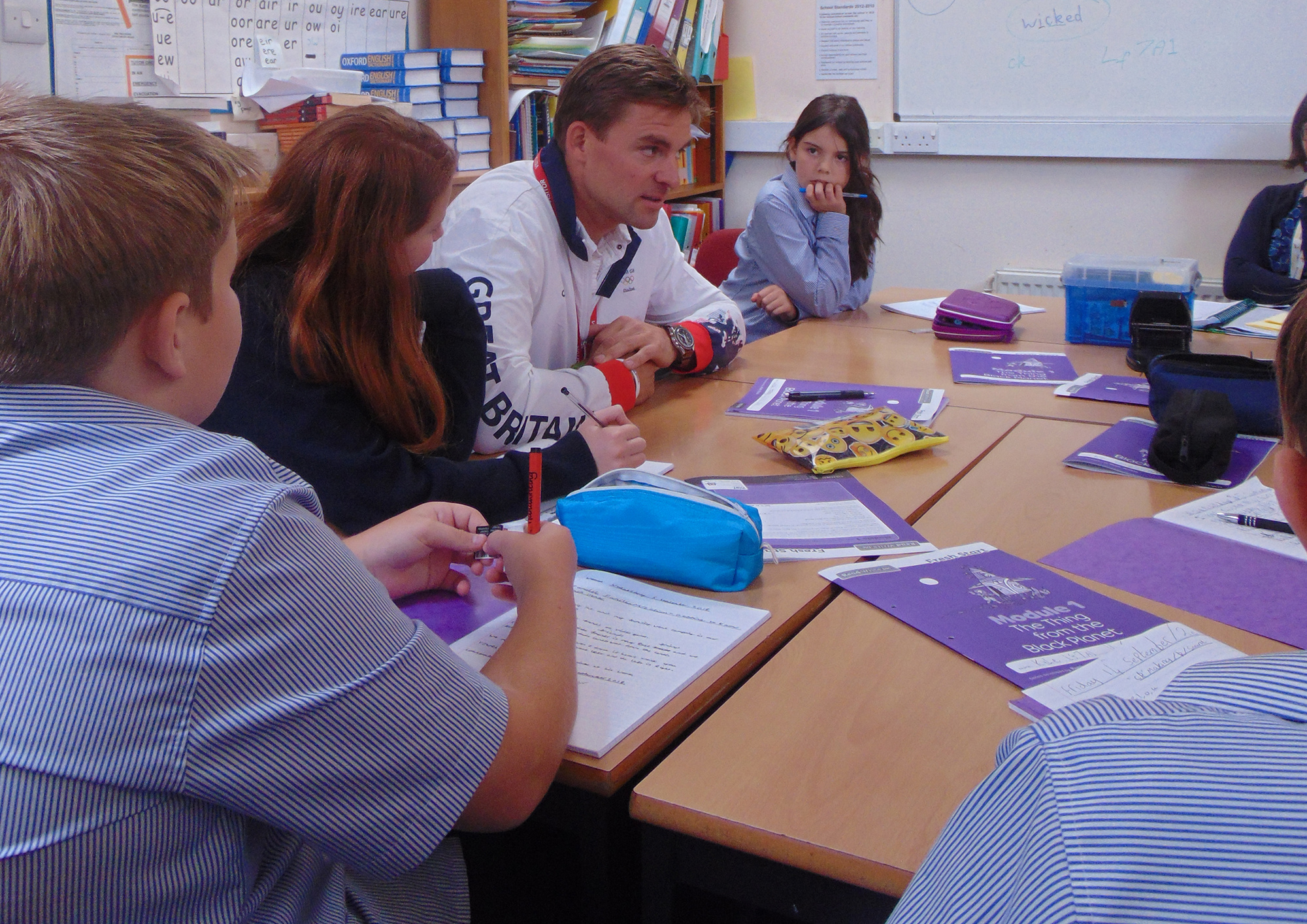 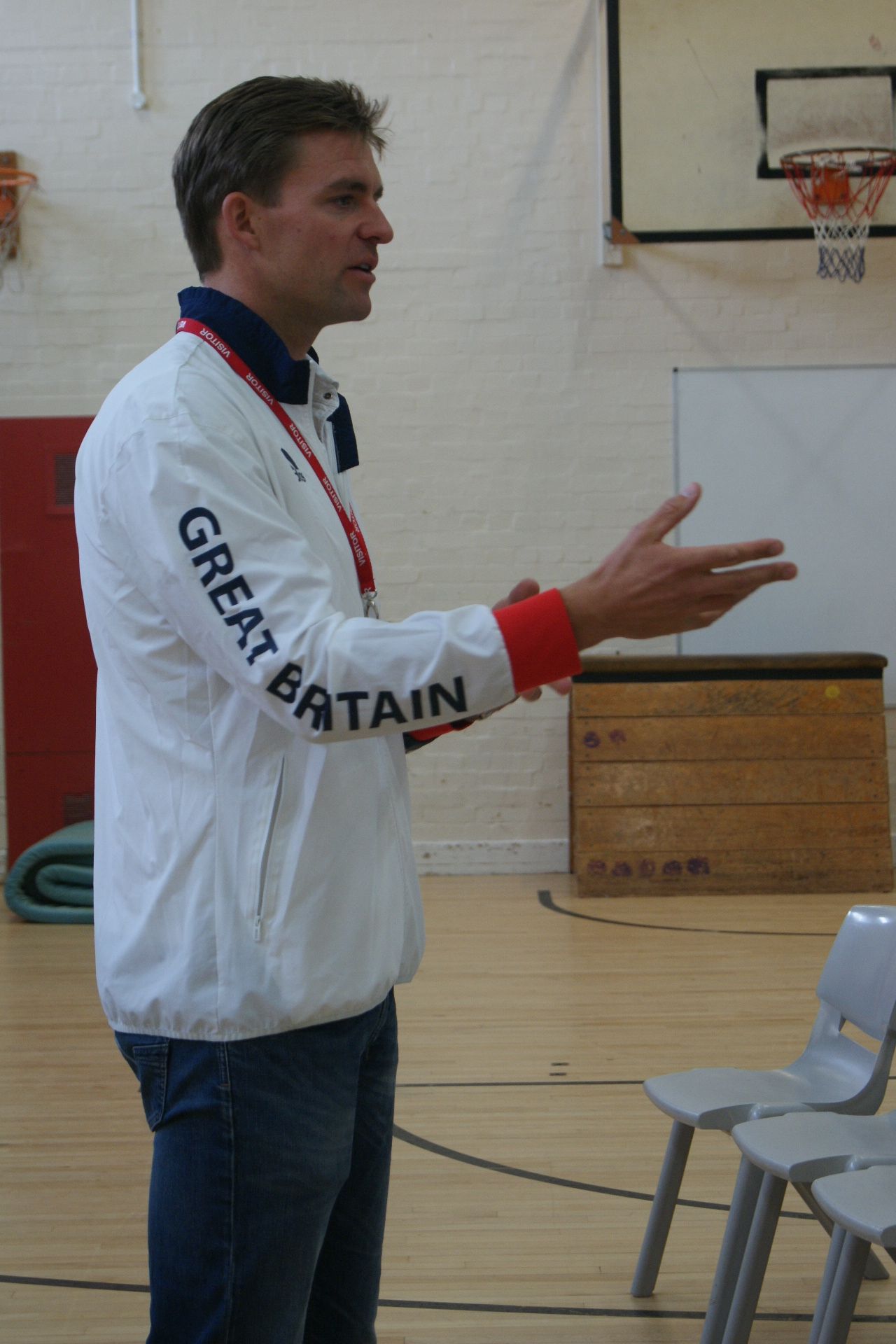 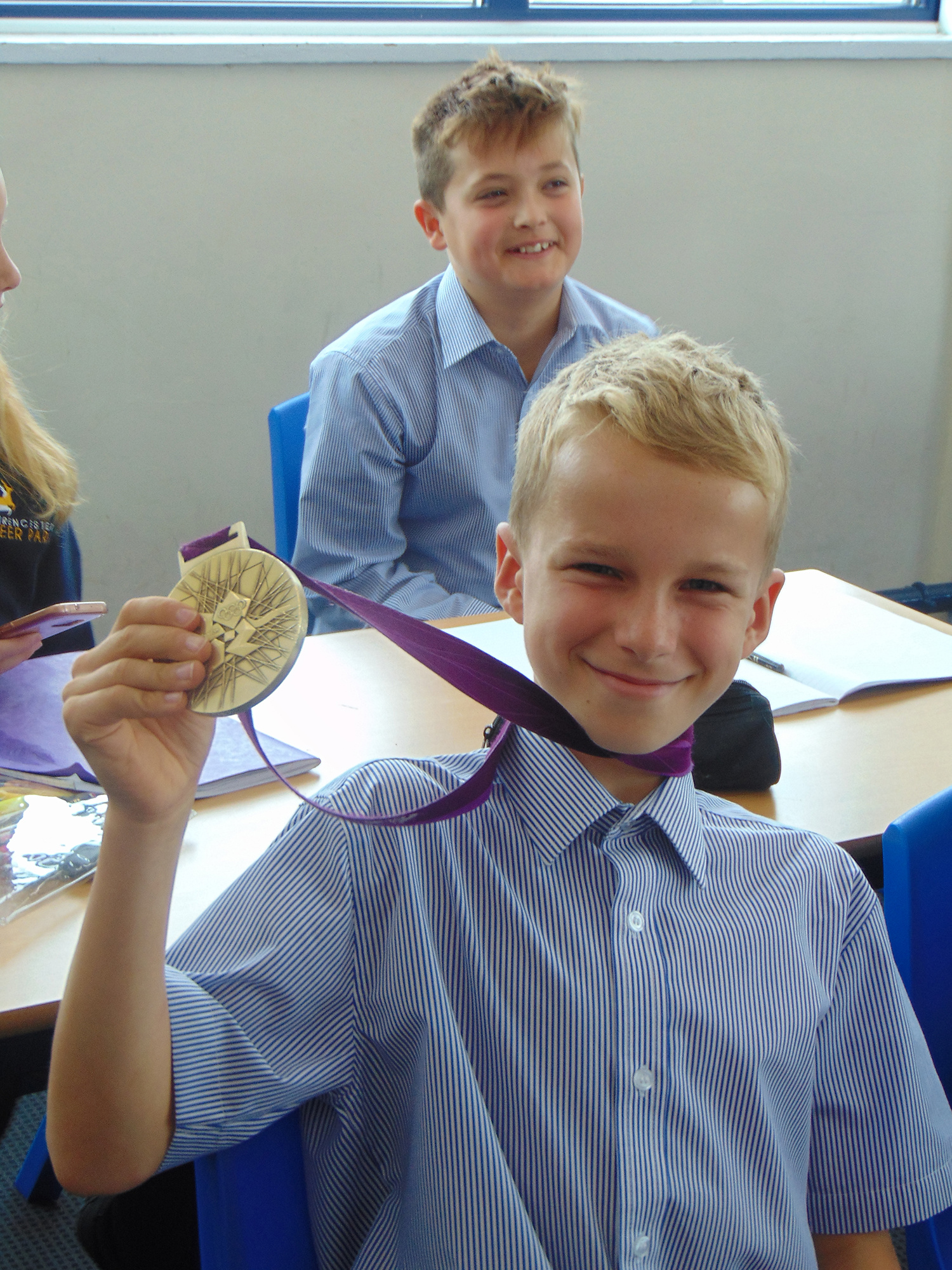 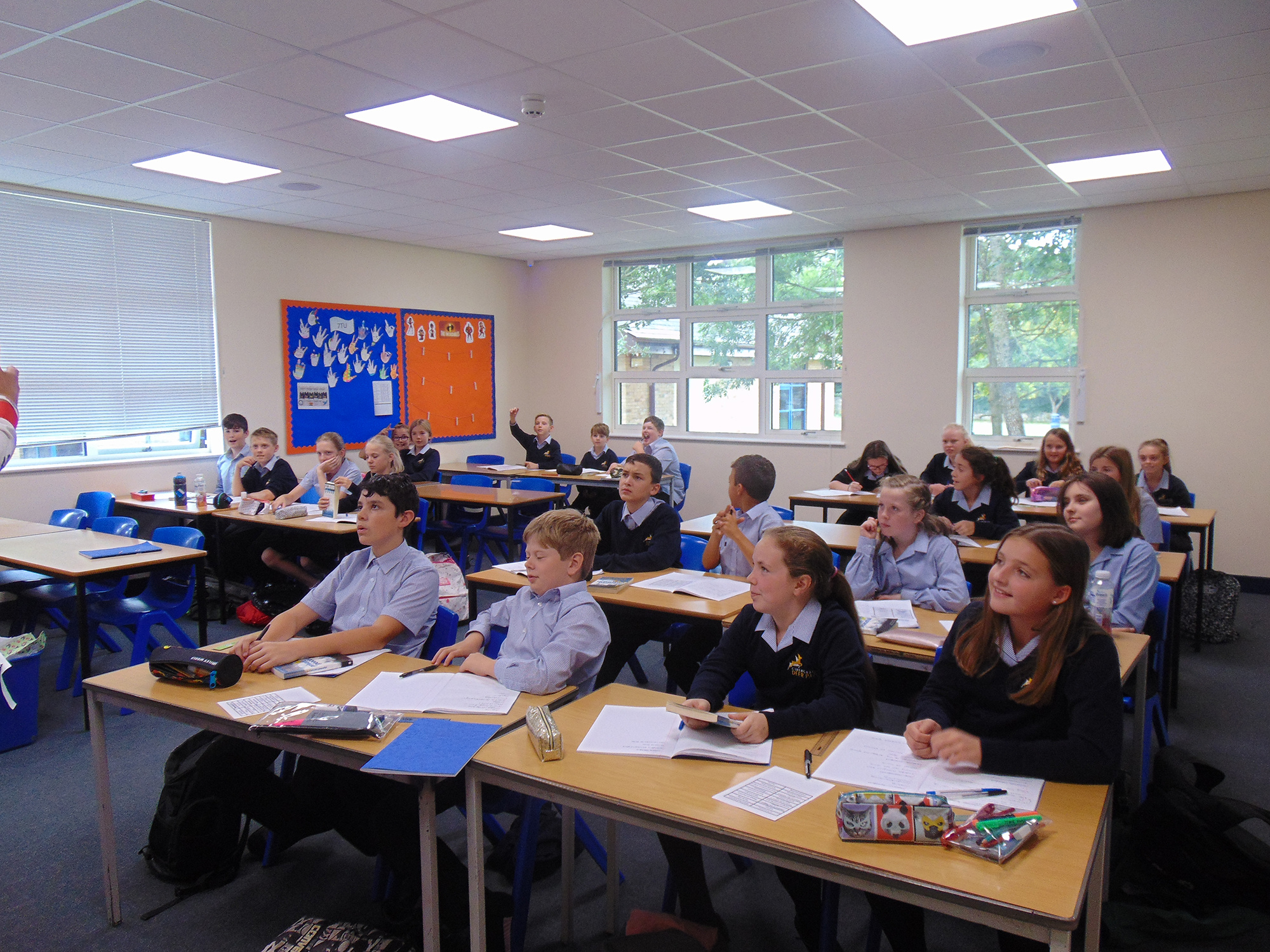 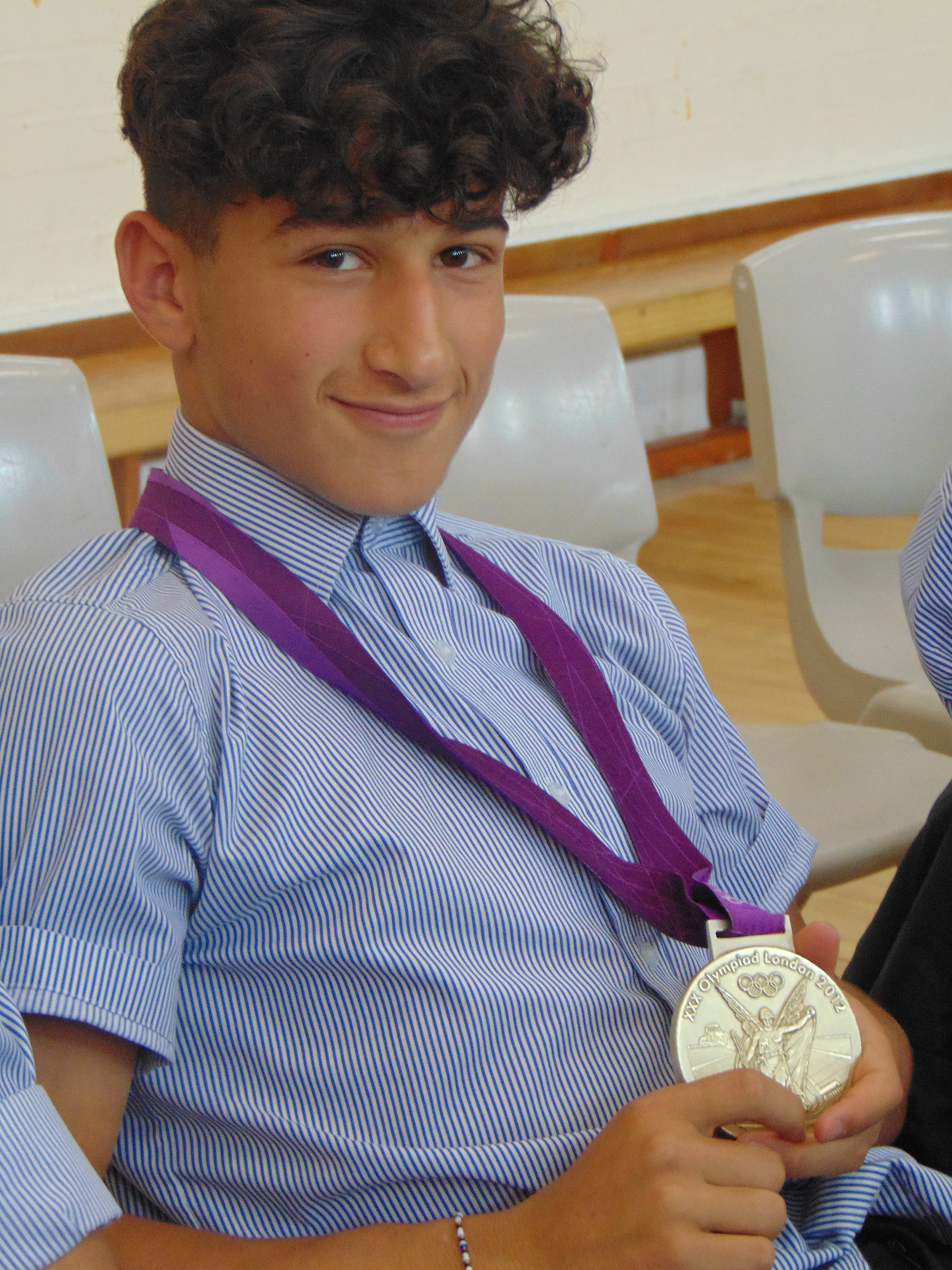 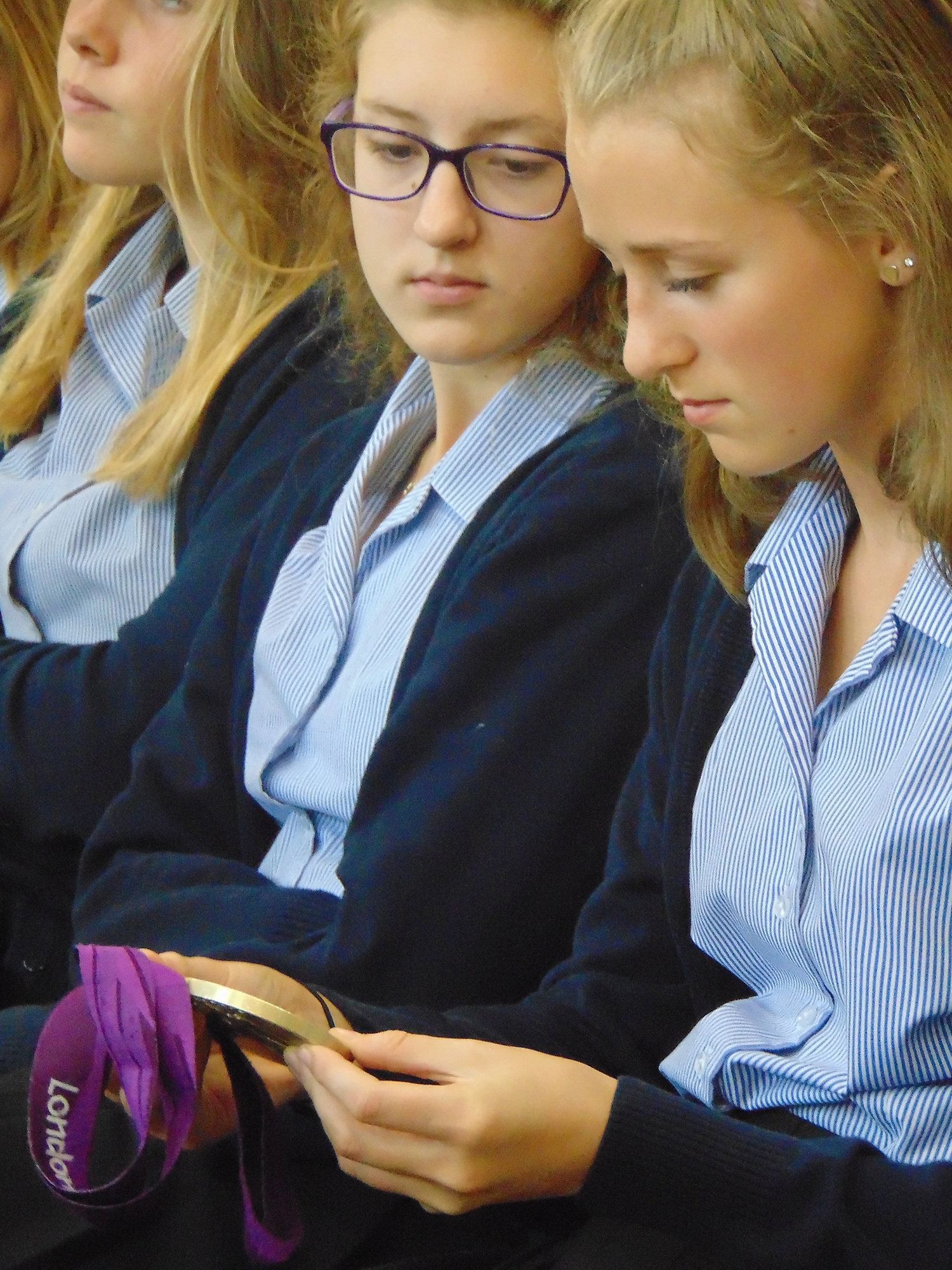 Peter was also interviewed by our Year 10 and 11 GCSE PE classes who had prepared questions in advance to help them understand key elements of the exam specification. This allowed them a unique opportunity to gain an insight into the life of a world class athlete. They were extremely grateful to Peter for the time he gave them on Friday and he commented positively on the quality of their questions, many of which he found pertinent and perceptive.

Pupils said "He was awesome" (Year 7), "I can't believe how heavy the medals are" (Year 7), and "That was a privilege" (GCSE PE) and "That was so interesting and it was great to have the opportunity to listen to him talk about his achievements and his setbacks" (GCSE PE). 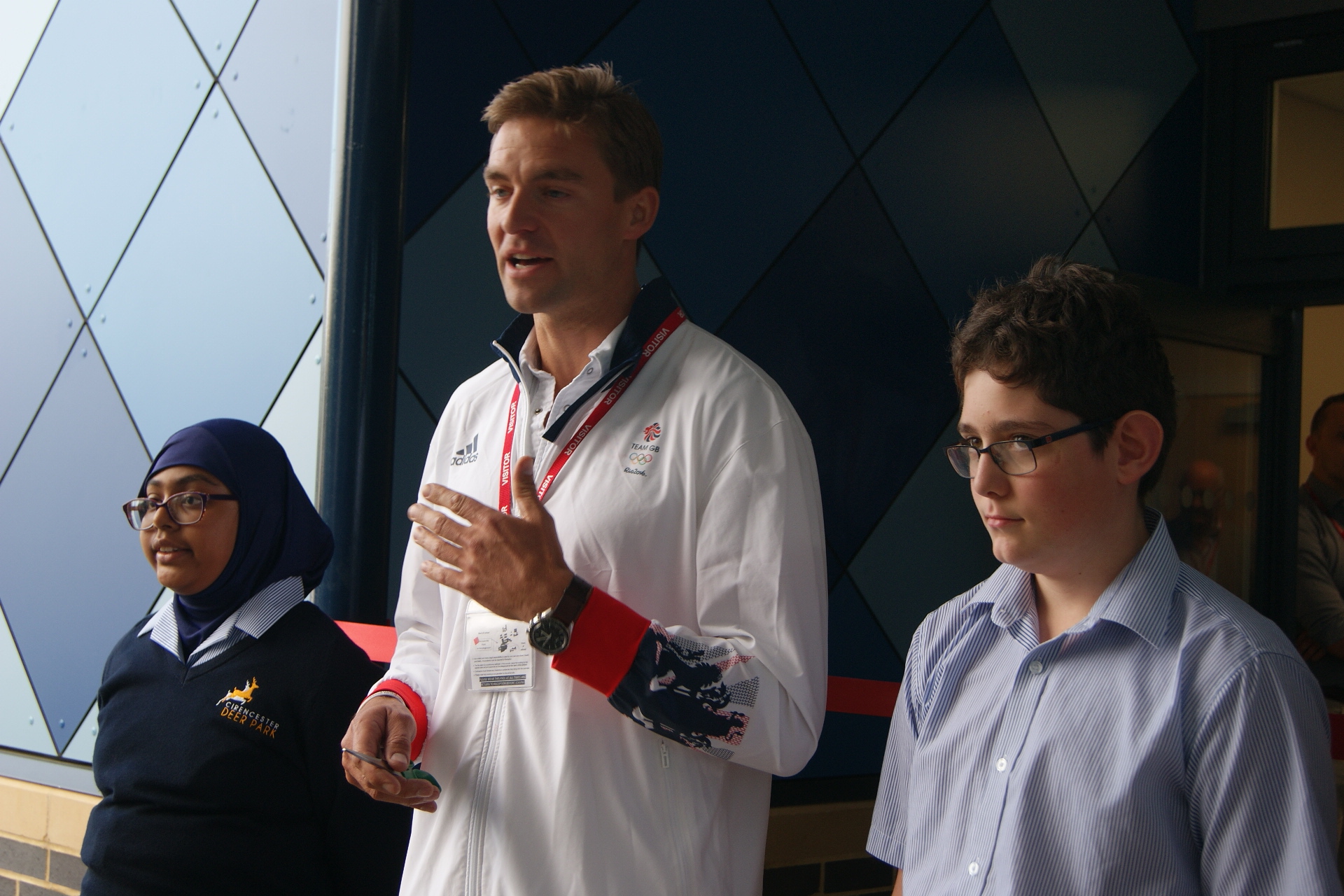 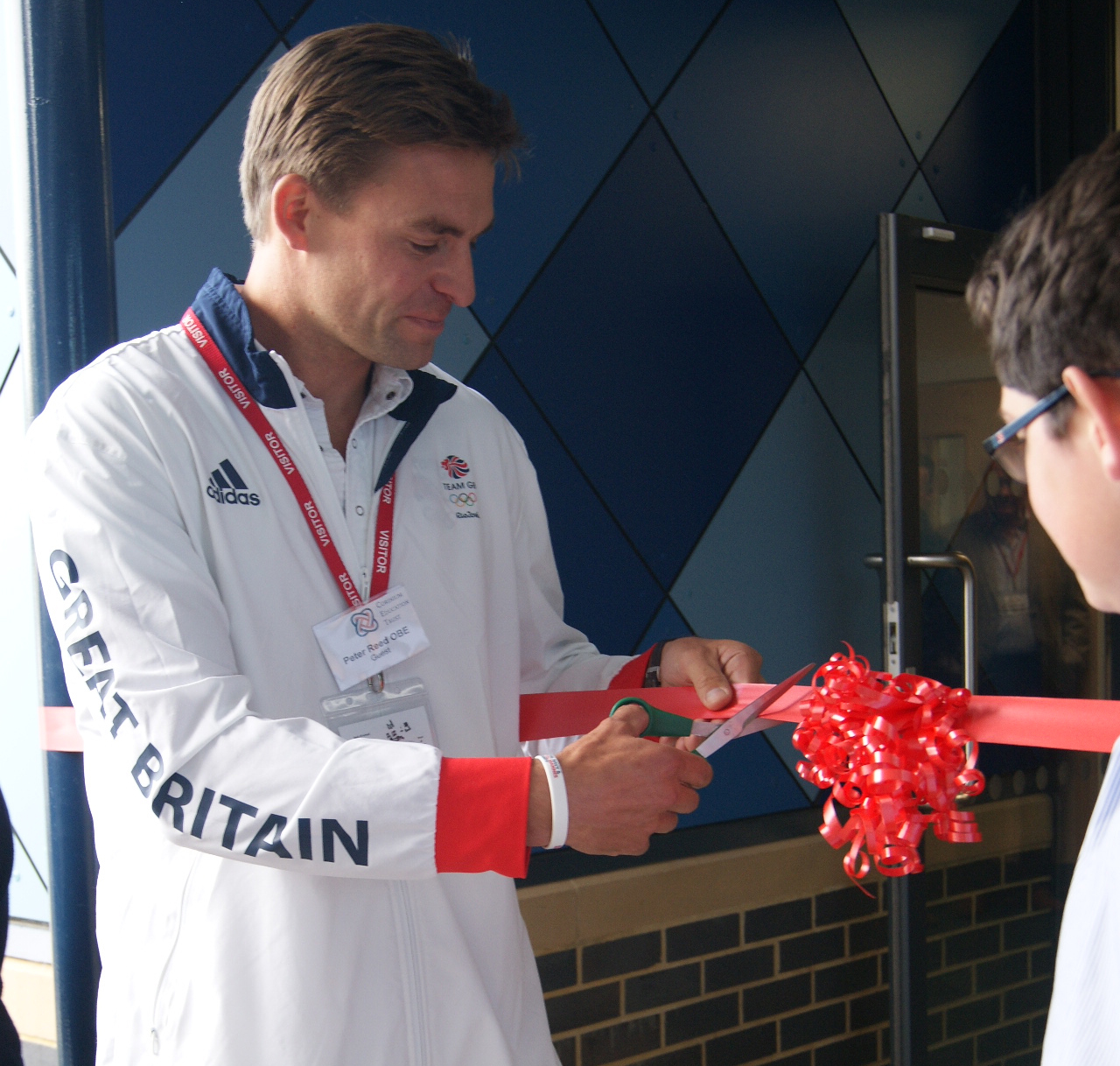 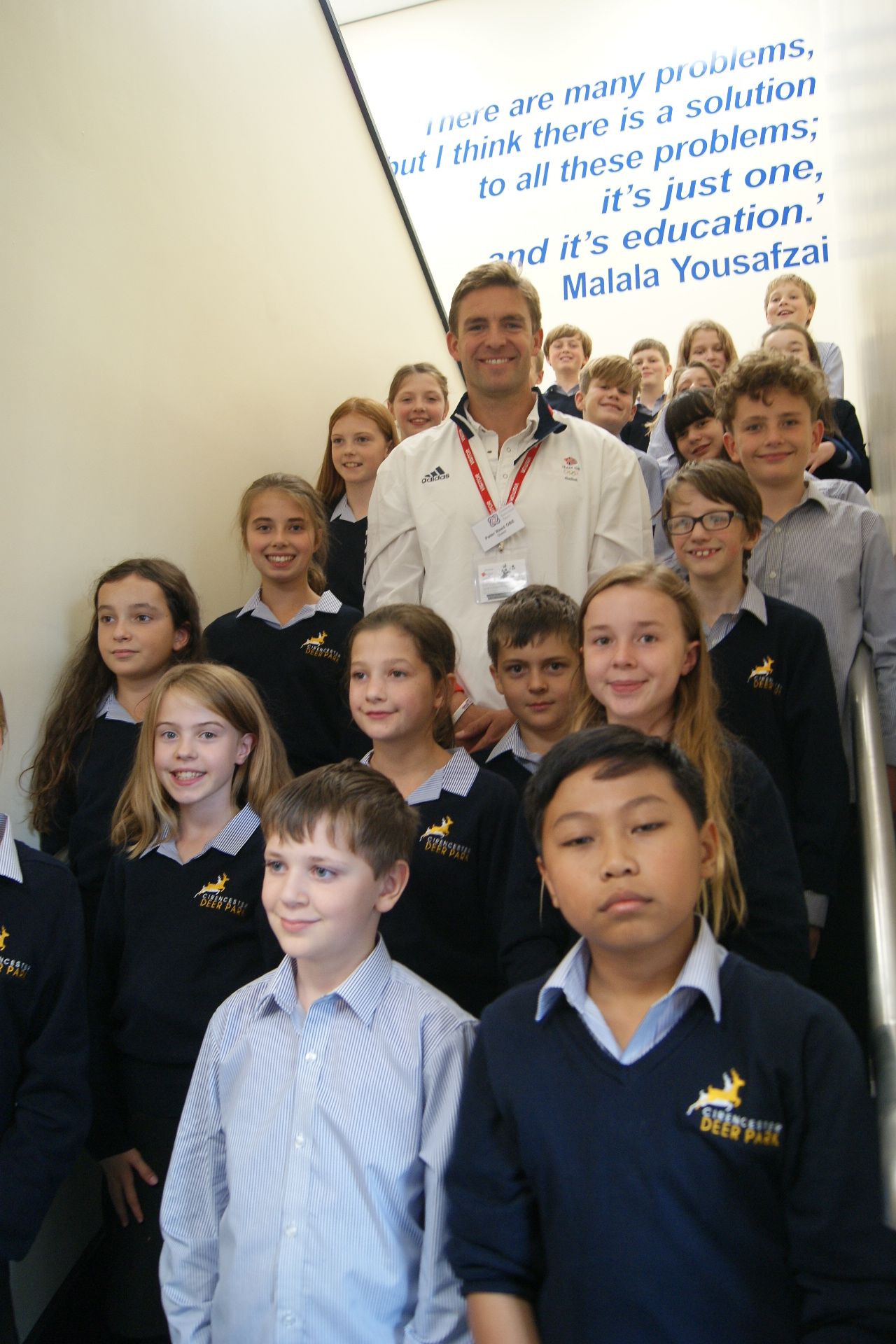 The opening of the new building was also an opportunity to thank the school’s architects ( Roberts Limbrick), consultant Simon Large and the building contractors (Feltham Construction). Chiquita Henson expressed her gratitude to everyone involved in the development of the new building which has significantly improved the welcome to the school. The large blue cube is similar to Dr Who’s TARDIS in that it appears much bigger on the inside and pupils and staff thoroughly enjoy learning in the light and spacious classrooms.

Chiquita Henson commented especially on how accommodating Feltham had been in allowing pupils and staff to tour the construction site at intervals to see the progress being made or to work out the Maths (Maths Faculty in Focus, January 2018) or evaluate its design (Design, Engineer, Construct with Mrs Evans)!

Graham Russell, Chair of the Corinium Education Trust and currently Chair of Deer Park’s Local Governing Body said ‘This new building at Deer Park is transformative and, coupled with the school’s new astroturf, is testimony to the commitment and ambition leaders and governors within The Corinium Education Trust share across all of its member schools.’