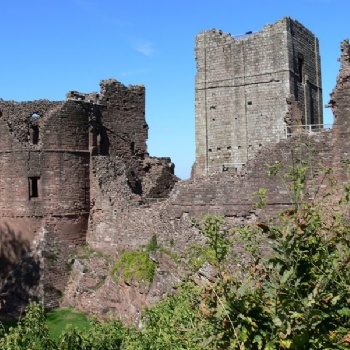 On Thursday 21 April a group of 60 Year 10 pupils visited Goodrich Castle in Herefordshire. The purpose of the trip was to deepen their understanding of Medieval Castles in preparation for their OCR GCSE History Controlled Assessment, which is worth 25% of their overall grade.

All of the pupils on the trip had already in lessons covered the background of why castles were first built across England and Wales after the Norman Conquest, as well as the features and development of castles over time. This trip was an opportunity for them to experience the reality and to identify the ways in which Goodrich fits with the national trend. The trip was led by Miss Hickey and supported by Mr Johnson, Mr Ferne and Mrs Ovens.

Upon arrival pupils were divided into two groups, for either a self-guided tour of the site or a guided tour led by Mr Johnson. Mr Johnson has visited the site countless times and everyone benefitted from his tremendous enthusiasm and expertise during the tour. He was able to draw attention to the host of former owners of this Baronial castle, including the notable William Marshal (1st Earl of Pembroke) who had been appointed protector for the nine-year-old Henry III, was regent of the kingdom in 1215 and whose family also signed the Magna Carta. The castle developed much under the ownership of Marshal, as well as under the rule of William de Valence, for whom the castle became more of a status symbol than for its original defensive purpose.

The tour covered the key features of the site including some of the best preserved ruins of any medieval castle in the country. The tour featured the Barbican, which is an exact replica of the Barbican at the Tower of London, as well as the Solar, the living accommodation for the Lords of the Castle including the de Valence family.

The Goodrich Castle trip will be an excellent base from which pupils can write their controlled assessment and it has given them a detailed insight into the History of this magnificent castle. Mr Johnson’s guided tour was the highlight and his passion has certainly enthused a number of pupils.

Those pupils on the self-guided tour had the opportunity to climb the 16 meter high ruins of the Keep to have impressive views of the River Wye and countryside below, as well as visiting the Dungeons.

After lunch outside in the Inner Ward of the castle, the groups had the opportunity to swap activities.

All pupils diligently made notes throughout the day which will help them with their controlled assessment. Staff were impressed throughout the day with pupils' enthusiasm and attentiveness throughout the tours, as well as their behaviour around the site. Pupils Jana and Maddy commented that “Goodrich was an eye-opening learning experience and will be valuable to our Controlled Assessment.” The castle staff were very complimentary about the school and the pupils' attitude during their visit.

Did you know that the castle was praised by William Wordsworth as the "noblest ruin in Herefordshire"? This excursion was an important educational experience which will be memorable for all of the pupils involved.