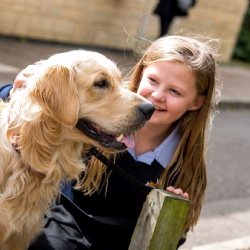 This year our School Dogs Denzil and Cosmo have been in lots of lessons with many different pupils. They have continued to be a huge hit around the school!

Following initial trials at the beginning of 2016, Golden Retriever Denzil and his nephew Cosmo (now age 7 and 1.5 respectively) are now an established part of life at Cirencester Deer Park School. Both dogs, owned by two members of staff, are in school at least two days a week and have their own timetables to follow! Their lessons may involve them being Listening Dogs in Year 7 Accelerated Reader classes, being in the Upper or Lower Pastoral Offices providing moral support or comfort to a pupil, enjoying watching our Key Stage 4 Horticulture pupils outside, or being on duty at lunchtimes, playing with pupils on the front field and playground.

Watching pupils grow in confidence around the dogs is something special, whether it is their pride in being able to take the dogs for a walk at break or lunchtime, in building a relationship with a type of animal of which they were previously afraid or caring for them as the dogs are moving around the school site.

As Cosmo has grown up over the past year we have been able to increase his timetable, so that more pupils have access to him in lessons. It is very tough to quantify but if you see Cosmo or Denzil in a lesson, you can see the positive impact that they have on pupils in the class: confidence levels rise and anxiety lessens. For our pupils this is great news!

In January, Deer Park was featured on the BBC Radio Gloucestershire 'School Shout' slot on the afternoon show, hosted by Nicky Price. Nicky had visited the school and also arranged for her colleague Francesca Osbourne to come to Deer Park and see the dogs in action. Read more...

Our BBC News School Report team created a video about the School Dogs for the national News Day in March. Read more..

In September 2017 we launched a Twitter account specifically for the dogs called @CDPSdogs and we are encouraging our pupils to send in their photographs of Denzil and Cosmo for inclusion.

If you have any queries about our School Dogs, please contact our Deputy Head, Mrs Lang.