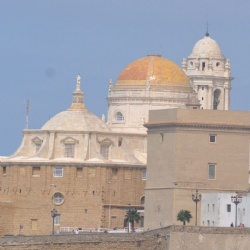 Year 9 and Year 10 pupils travel to Cádiz on the return leg of their Spanish Exchange.

On Tuesday 20 September excitement was high as 12 pupils and two staff met and took the National Express to London Victoria on the first leg of a journey to be reacquainted with Spanish friends who had visited Cirencester in June. Surprisingly comfortable, the coach is an under-used form of transport. The chatter amongst the pupils focused on temperature, what it would be like living in a strange house and communicating with our hosts. From the coach station it was a quick dash to Victoria train station to catch the 12:20 to Gatwick, from where we would fly to Seville. Flying British Airways, we were treated to exemplary service and arrived 15 minutes ahead of schedule. We literally walked straight through customs and were collecting our bags 15 minutes from landing. We were met by our coach driver, let's call him Dave, who took us to Cádiz to meet our hosts.

Getting off the coach, a swarm of arms were flung around necks as we were welcomed by our hosts for the week.  The sounds of trundling suitcases quietened as the pupils departed to their new homes. An early start was promised - Spanish pupils start school at 8:00am.

Pupils in Spain have 6 one hour lessons in the day, with a half hour break half way through, before going home for lunch at 2:30pm.  Not only do they have longer in the classroom, but their social time in school is shorter than in the UK; at Colegio Argantonio (Cadiz) there is no tutor time, no canteen facilities and very few social areas apart from the playground. They do not have half-term breaks, working solidly across three terms with just a sprinkling of bank holidays.

Arriving bleary-eyed at school on Wednesday, pupils had 3 hours of lessons, including Maths tests, drawing plants in Science and an opportunity to discuss schools in English. After break we took part in a masterclass of traditional Flamenco dancing, where the Brits learned a few new moves - it was exhausting yet fun as we grappled with trying to coordinate our wrists, arms and legs.

Then off to the old part of Cádiz, where we explored the architectural splendour of one of the oldest cities in Western Europe. Our hosts took us home for lunch before meeting up again after siesta time for a tour of the great Cathedral. Climbing the bell tower, which stands at 133 feet, certainly gives your calves a workout but it was worth it for the views: breathtaking, stunning, inspiring.  The cathedral itself was a work of art - the attention to detail, the vastness of the ceilings, the crypts for each Saint enclosed the central altar - and you could feel the peacefulness, the quiet and calm compared to the bustle outside. Then off for churros! Made from flour, water and salt, then piped and deep fried, churros are dipped in chocolate sauce or sprinkled with sugar before being devoured. No day in Cádiz would be complete without a visit to the beach, so we were dragged, kicking and screaming, to one of the many golden beaches that surrounds its perimeter.  At sunset, about 8:00pm, people started to drift home as the sand drifts along the shoreline. 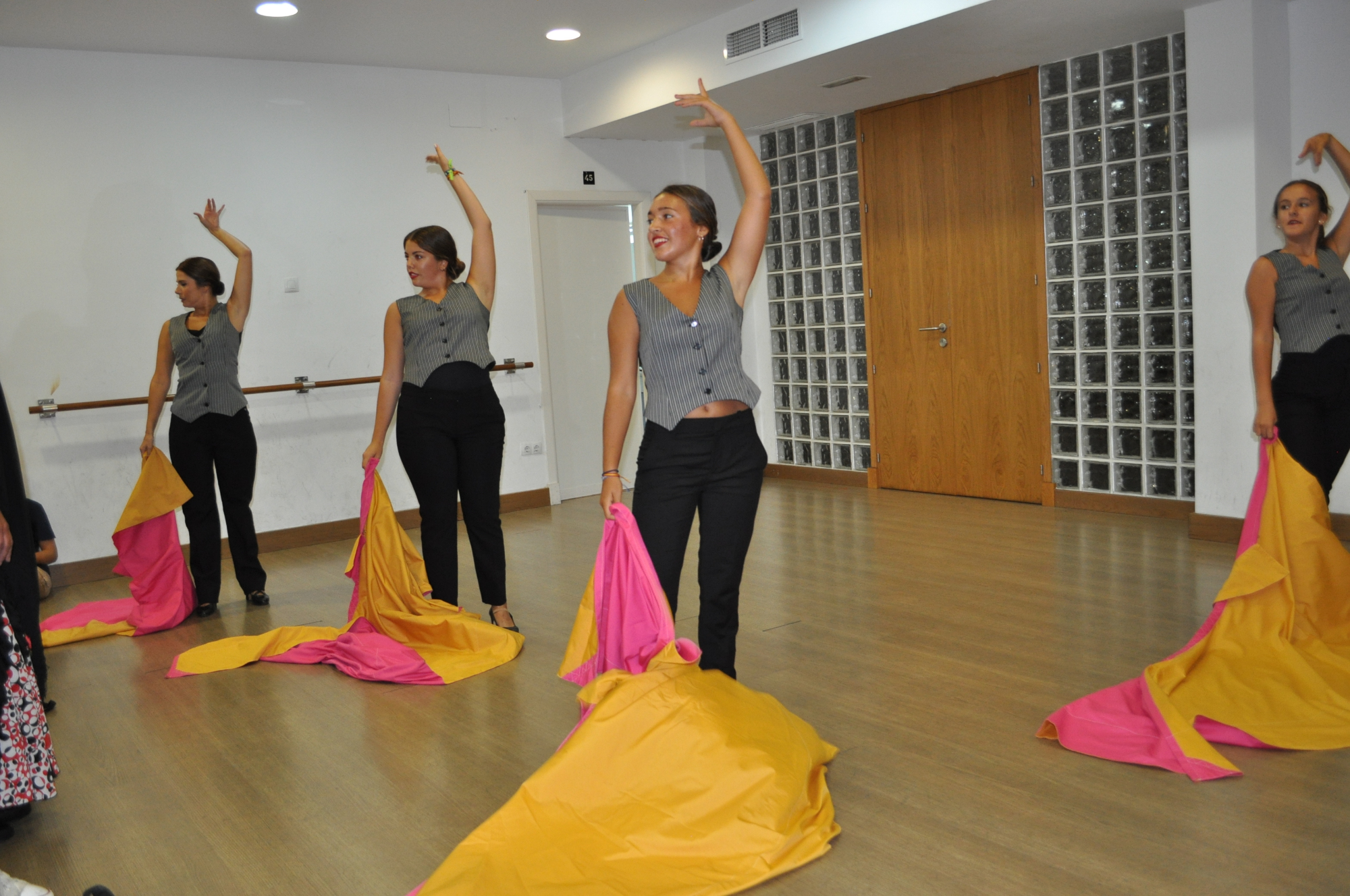 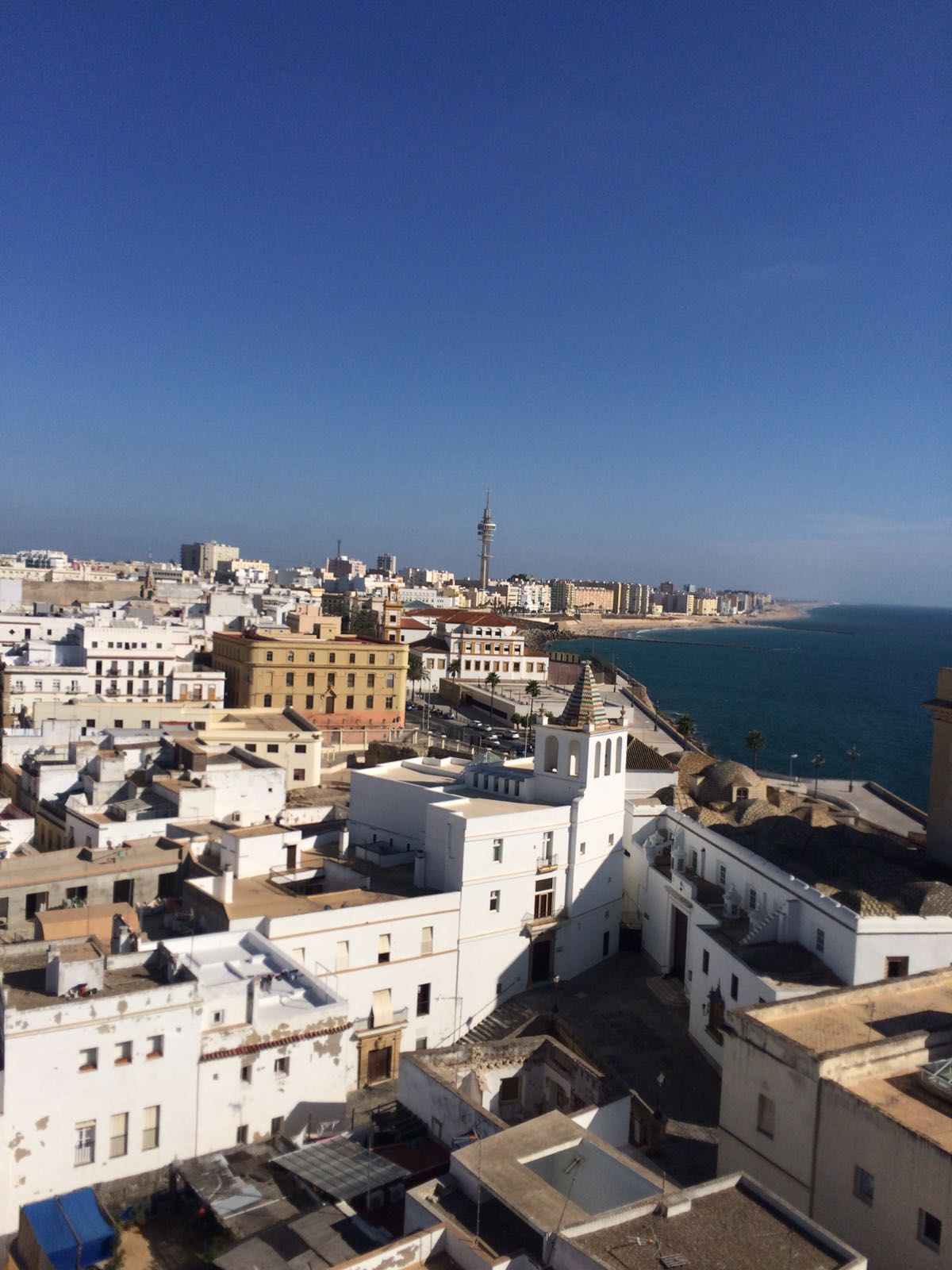 Thursday was even busier. School-based lessons in the morning as usual and then surfing lessons. In the UK we have swimming lessons as part of PE, the Spanish go one better. A dry run onshore allowed pupils to get familiar with the technical aspects of surfing. Donned in wetsuits and armed with surfboards, the group threw themselves in to the water aiming to recreate scenes from Hawaii Five-O. Determination to overcome the difficulties of actually standing on the board was evident as pupils battled with their positioning.  Of course they fell in but that was part of the fun and the smiles of success, however short or long-lived, was great to see. Surfing morphed into swimming as we stayed on the beach to have pizza, followed by volleyball and sand castles. With the temperatures in the 20s we could stay well in to the evening, departing again at 8:00pm. 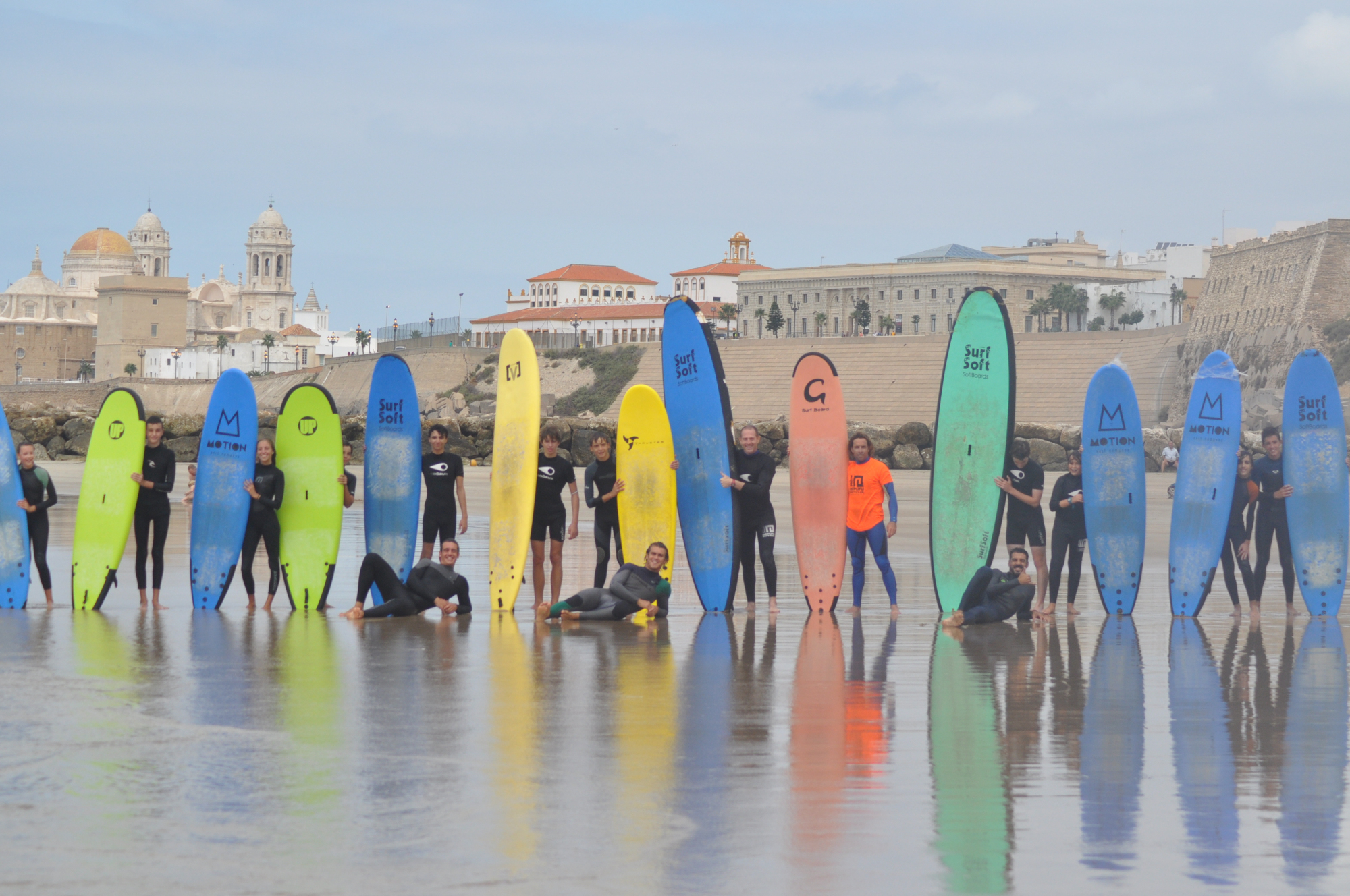 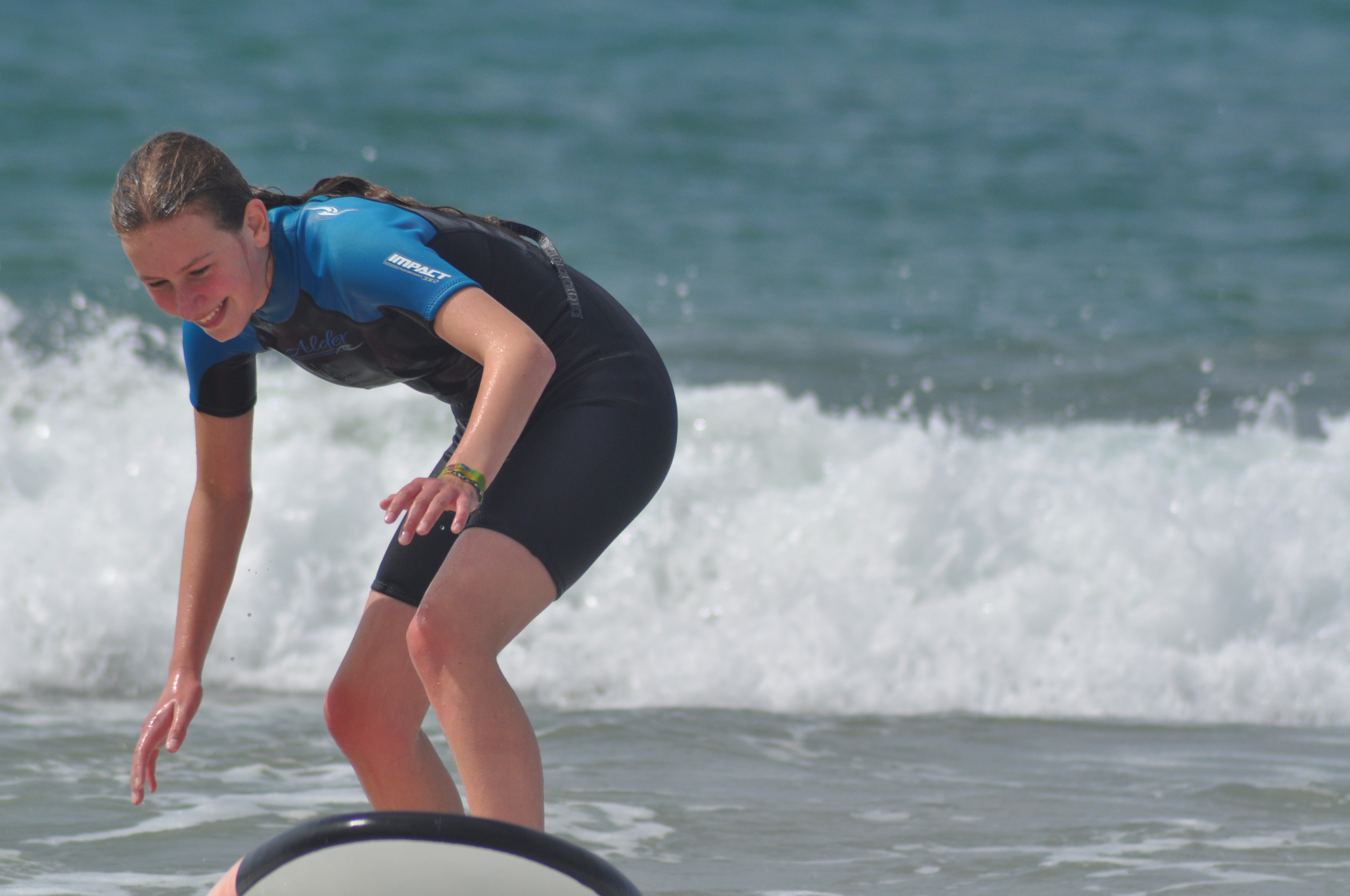 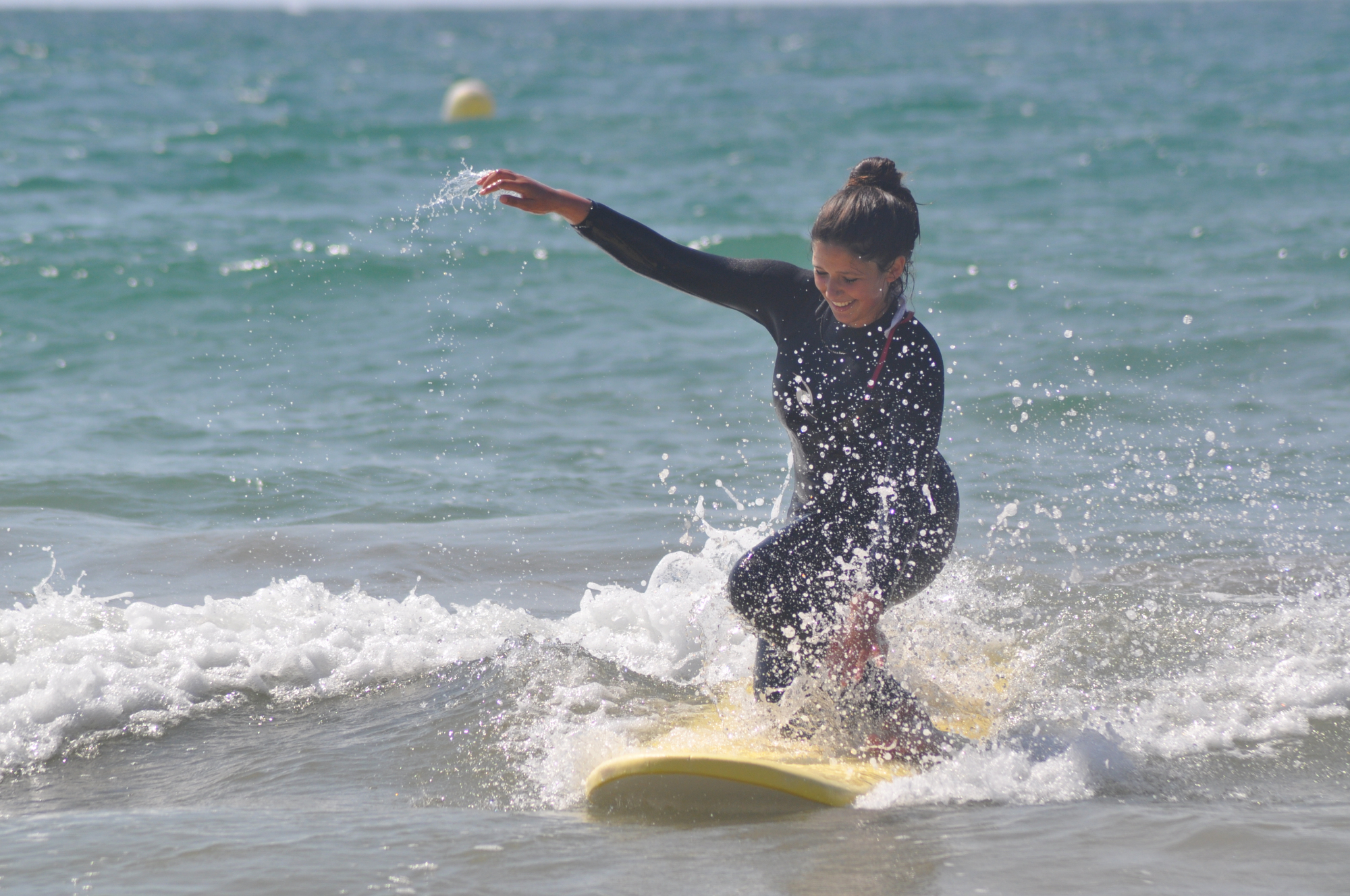 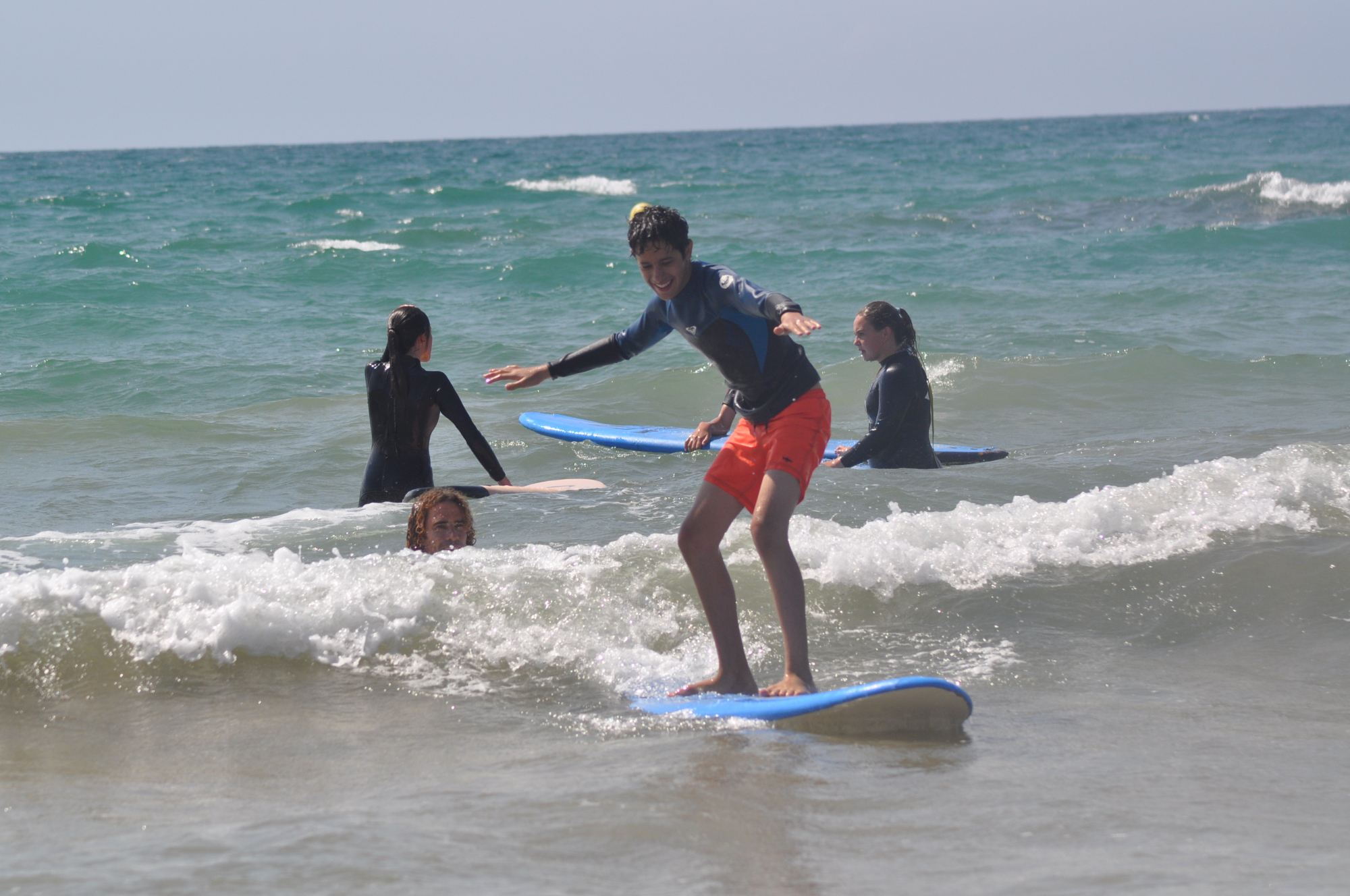 After lessons on Friday, our pupils immersed themselves in the Spanish language as they completed a Gymkhana (treasure hunt). Working in teams of 4 with a Spanish guide, they had to collect evidence to show they had completed tasks or answered questions. These included buying a postcard and stamps to send back to school, asking shopkeepers for prices and translating Spanish text to work out answers. The beauty of this was that our pupils had to speak Spanish to complete their challenges.  We met our Spanish hosts at lunchtime for pescaíto frito - squid, octopus, dog fish, cod's roe, whitebait and fish croquettes.  After lunch we had to experience another beach: La Caleta. 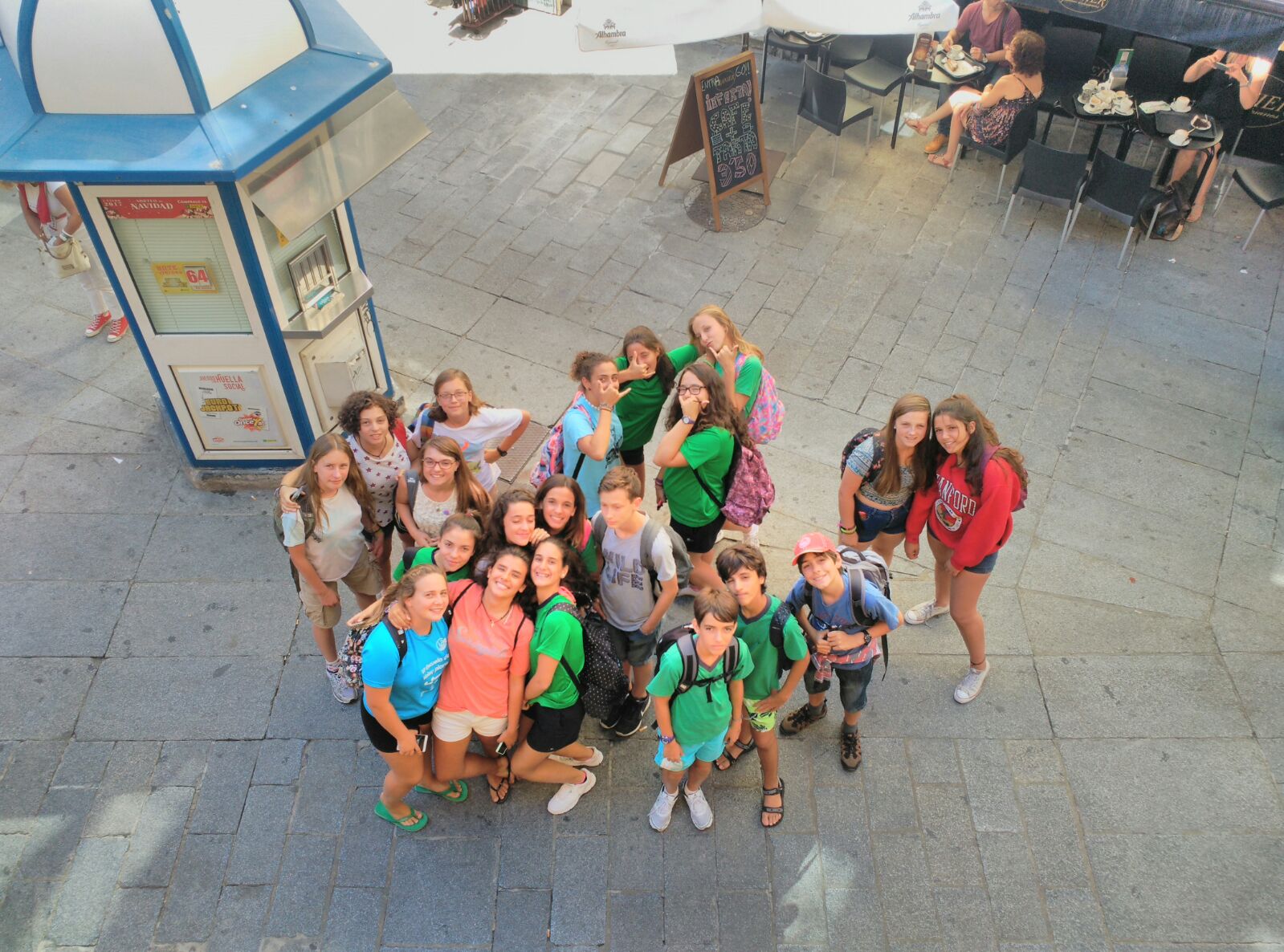 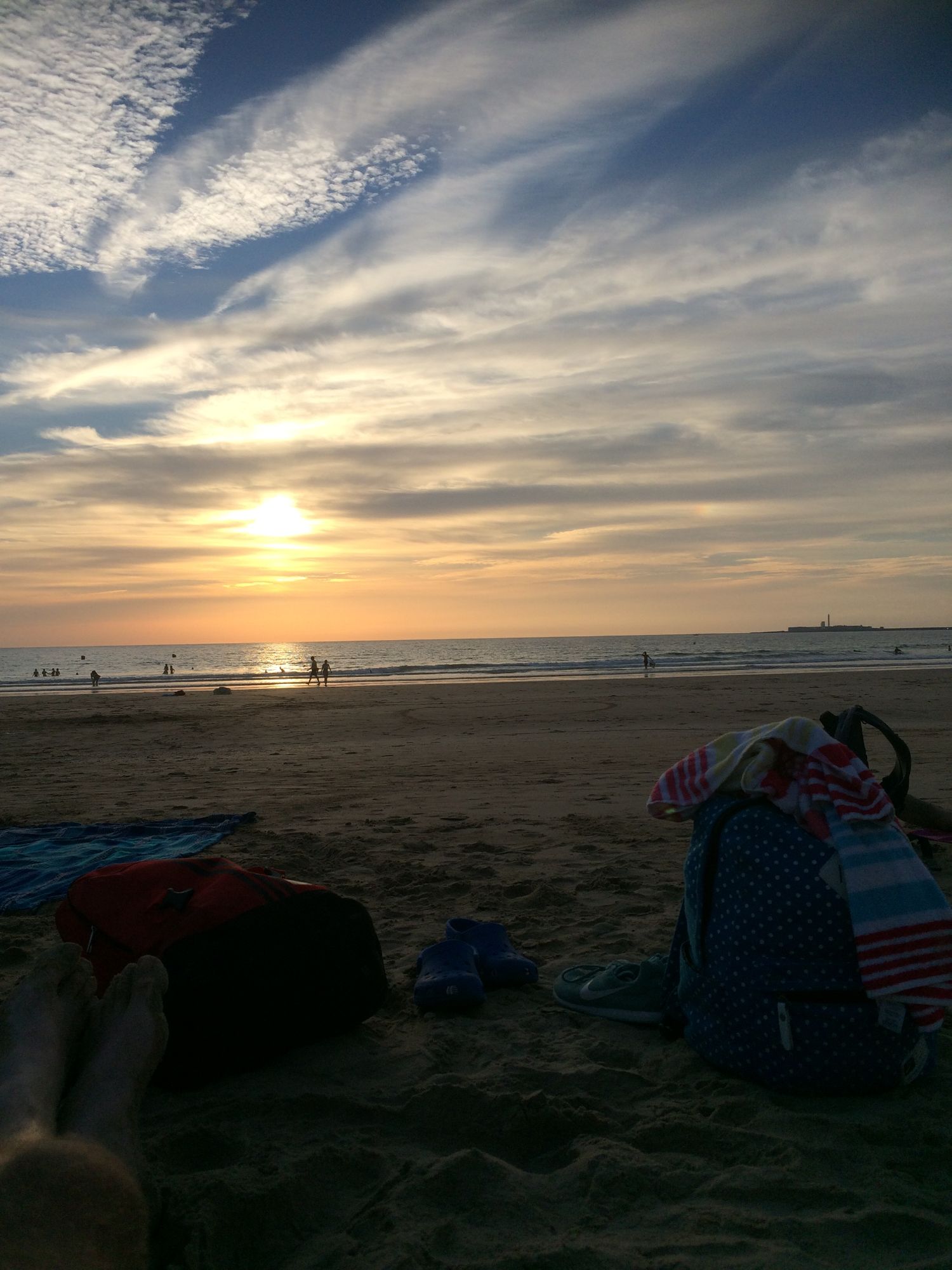 The weekend was upon us, with time to relax and recharge. Being a close-knit group, the hosts arranged to meet up at Bolonia beach, said to be one of the prettiest beaches in Europe. Wild and windswept, the dunes gradually strangling the surrounding countryside leaving reminders that there was once life. Prior to the beach we visited Tarifa, the southern-most point in Spain, with Morocco and the continent of Africa a mere 14km away.  This is also home to the tuna tinning factory which continued the heritage of the fish preserving techniques of the Romans, thousands of years previously. Beachside in Bolonia are Roman ruins with its Amphitheatre.  Perhaps Cirencester has more in common with this part of Spain than first thought? 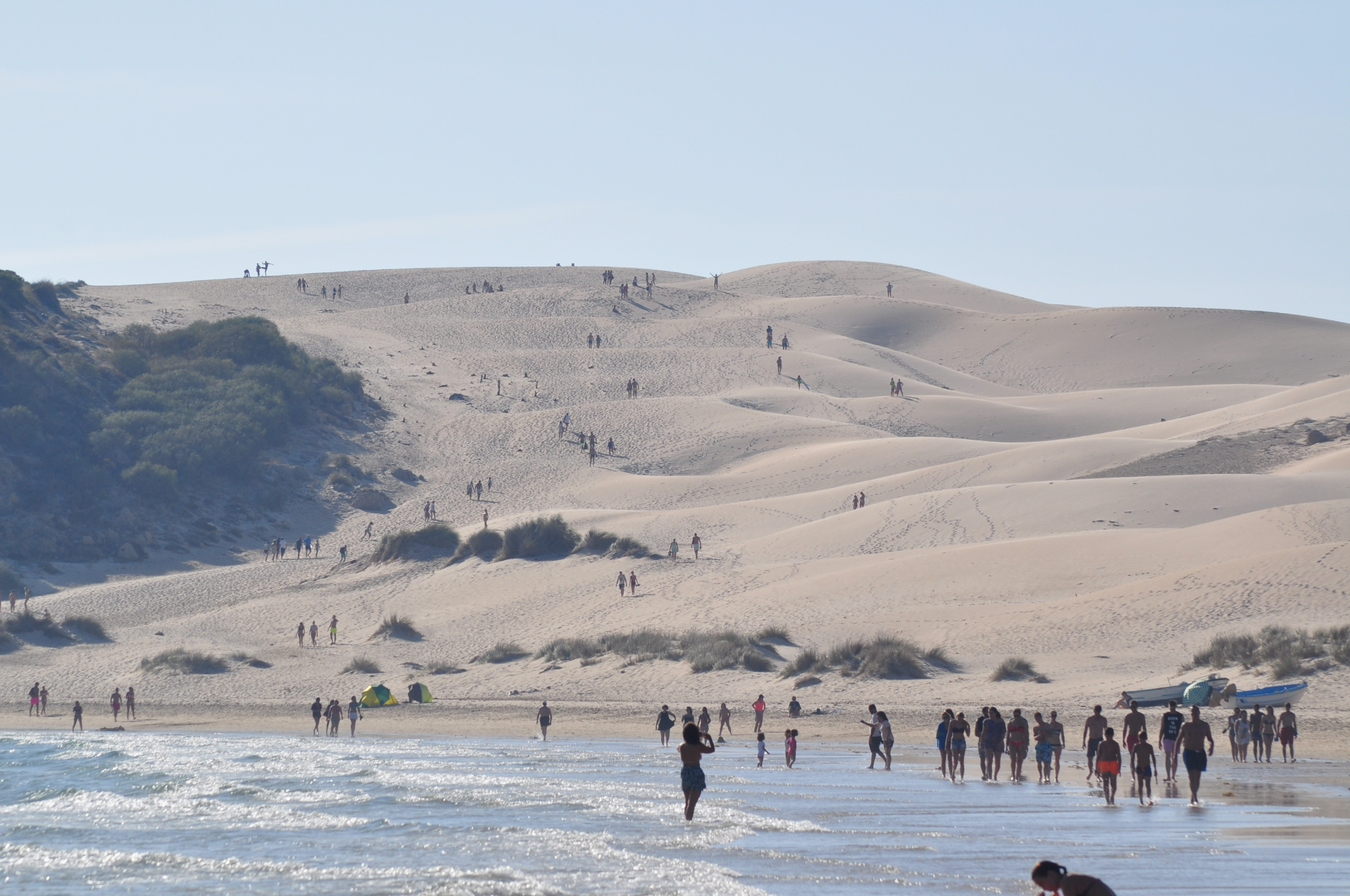 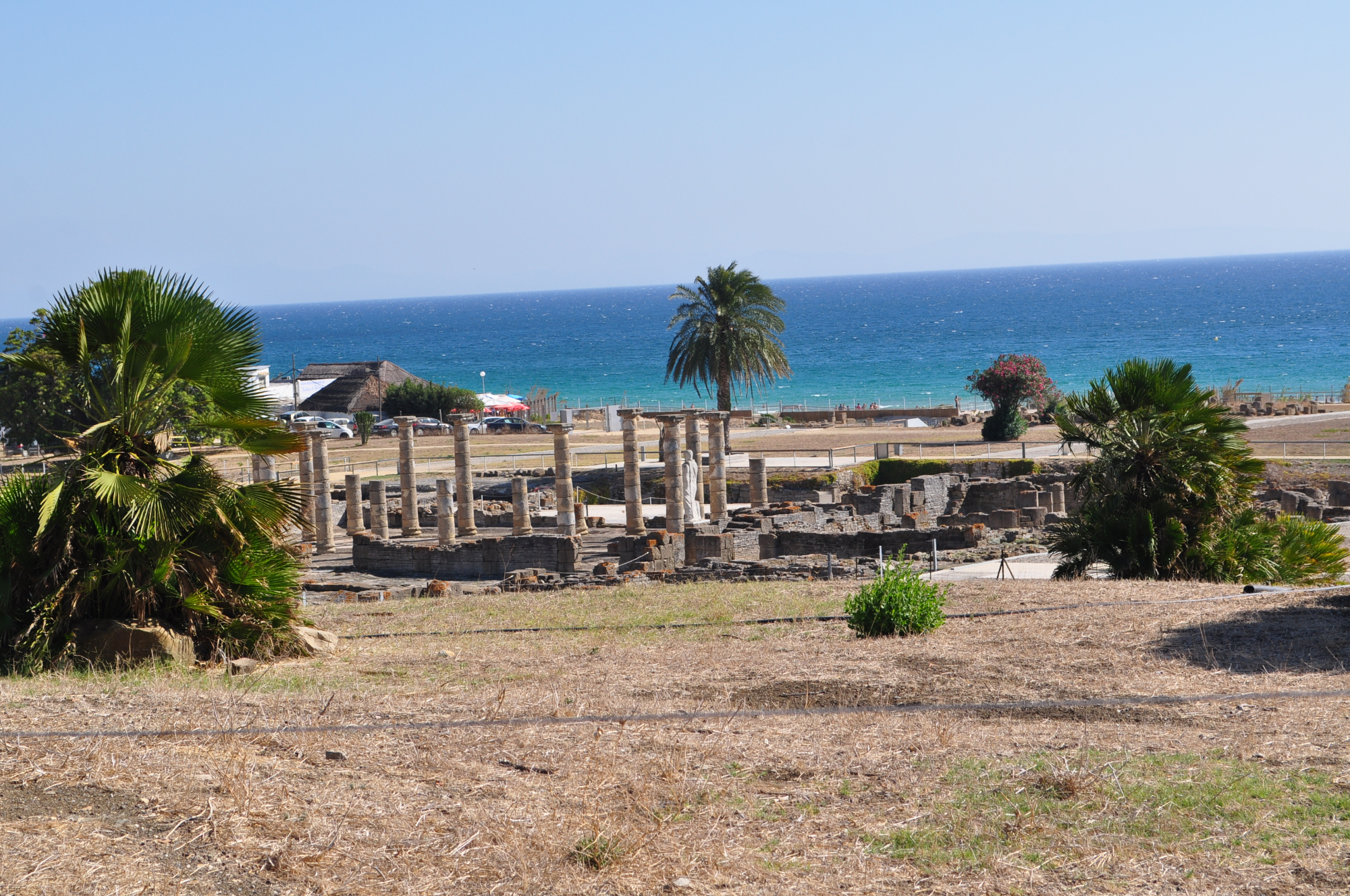 Pupils spent the weekend with their families doing a wide and varied range of activities. One family rented a villa in Tarifa to take full advantage of the weather and maximise the beach opportunities, whilst another helped to celebrate her host's Saint's day.

Monday was a day of culture and appreciation.  As usual, pupils attended school in the morning and then were treated to Cádiz's own Amphitheatre, which was once full of roaring Romans cheering the spectacles of the day. Monday, we found is not a good day for culture in Cádiz, as the museums and historical monuments are closed. We, therefore, had to improvise and had a mystery tour of the town before joining our families for lunch. Siesta time is important to the Gaditanos (Cádiz locals); it allows them to get ready for the beach.  Our last afternoon in Cádiz was spent enjoying the clear blue and warm temperature of the sea.  Swimming, splashing, snorkelling in to the evening whilst the exquisite sunset bid the Exchange a fond ¡hasta luego!

Seville was our final destination on Tuesday. The glistening sunshine reflected off the tiles in the Plaza de España, depicting each and every region of Spain.  We meandered through the ancient back streets, absorbing the picturesque sights including ornate architecture, statues and gorgeous courtyards. We even managed to catch up with an ex Deer Park pupil, Samuel Vickers, who has made Seville his home after studying Spanish at university. He now runs his own business in the centre of the city: La Banda Rooftop Hostel. We had lunch in Triana, a vibrant old quarter, with an amazing market (mercado) offering a luxurious choice of fresh food, with choice for every palate. Las Setas de Sevilla was our final stop where we were able to walk in the clouds to enjoy the panoramic view of the city.  The day was exhausting due to the enervating heat - temperatures rose to 40c by mid afternoon. 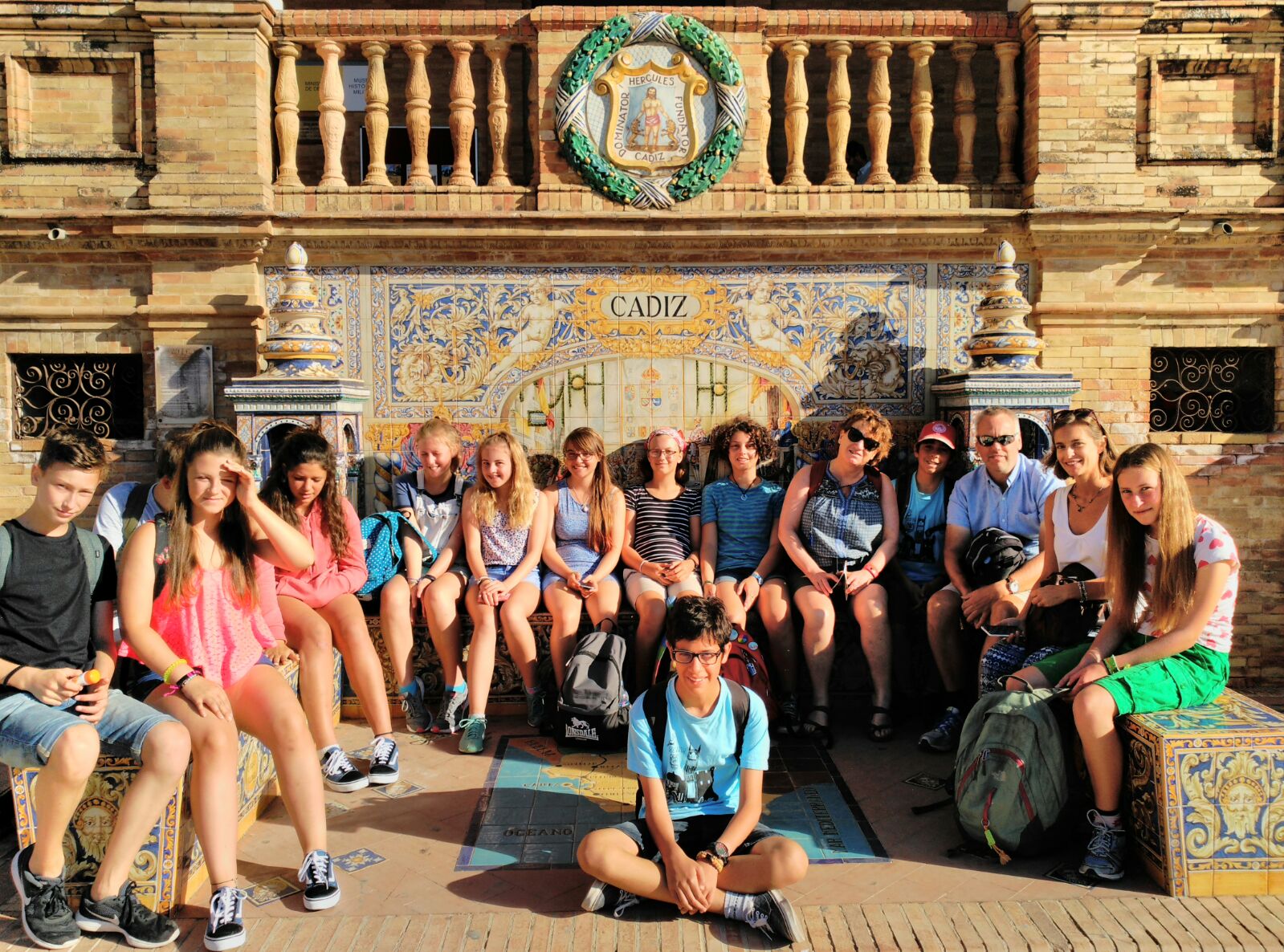 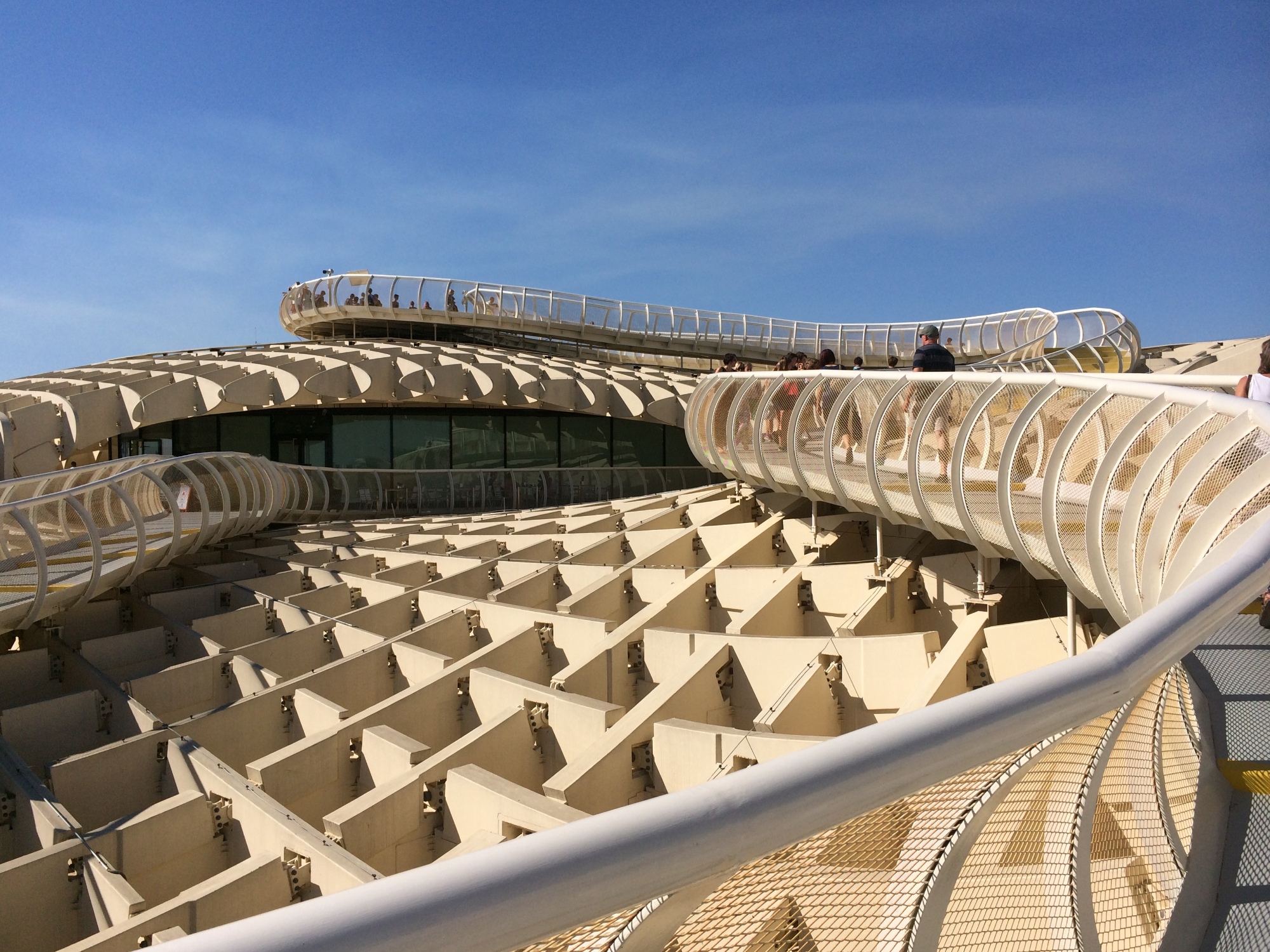 Emotional and heartfelt farewells were exchanged at the airport, leaving behind our friends and the start of the end of this year's Spanish Exchange. Plans have already been made for a return next summer to develop blossoming ties between families.

All the pupils and staff have taken fond and lasting memories from this exchange, cementing their original friendships and making new ones, ones which will hopefully be just a starting point and which will develop into life-long and meaningful friendships.

"Spain is a beautiful country, Andalucía is a beautiful region, Cádiz is a beautiful city and our hosts are warm and welcoming, so generous with their time, opening their homes to us. I have made new friends and understand a little more about the Spanish culture."

"The trip has really improved my Spanish and I have made some great friends. I enjoyed trying new things and being in a different environment. It was an amazing experience."

"I really enjoyed going to Cádiz. It was a brilliant experience - i loved learning about culture and how things are done in school in Spain. I feel much more confident with my Spanish."

"Whilst in Spain I made new friends, learnt Spanish and made incredible memories. I learnt how to surf and went to the beach every day. It was an unforgettable experience!"

"It was an incredible experience. I have learned alot about England and I made a lot of new friends."

"The best week of my life. I want to repeat it with these amazing people!"

"Friends are the stars - sometimes you don't see them but you know they are there forever."

"Amazing experience. Keep it in my heart and my soul for the rest of my life."

"It has been a fantastic experience but I will miss you very much."

One of our Year 9 parents shares her thoughts: "What a fantastic opportunity for our children! The chance to better their knowledge of another language, to experience another culture first-hand and to make new friends. All the other parents I spoke to wished they were going! My son returned from a week in the south of Spain determined that he will live in another country. The Spanish Exchange has been brilliant for us as we have both made new friends in Cadiz – the mother of our partner student and I have been using WhatsApp to communicate since before the Spanish students came to England in June and she and I messaged and sent photos to each other whilst we hosted the other’s son. Having always wanted to visit Cádiz, I am now much more likely to do so and will hopefully meet up with my Spanish counterpart whilst there!"

What a fabulous city, warm people, beautiful buildings and beaches! I was so proud of our Deer Park pupils and how well-behaved they were; respectful to their Spanish family members and always ready to join in. They showed great maturity in the quite big cities and on the journeys there and back. I felt blessed to return to stay with Esther Marcos (Co-leader of Spanish Exchange) and her beautiful family. Seeing her parents for lunches and siestas was like being welcomed back into the arms of long lost friends. An unforgettable experience thanks to the efforts of all involved.