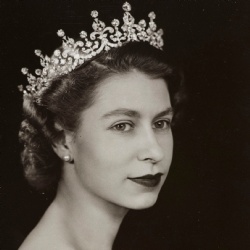 My first official communication to you all as your new Headteacher of Cirencester Deer Park School ought to be a reflection on my first week and an opportunity for me to ‘set out my stall’ for our mission, our vision and the values I want to promote in the school.

However, the death of Her Majesty, Queen Elizabeth II on Thursday 8 September 2022 has, rightly, taken precedent. I will postpone my first formal address to you until next week. Instead I have provided a transcript of the assembly the whole school received on Friday 9 September:

Queen Elizabeth the II died yesterday at the age of 96. She was our longest serving monarch becoming queen in 1952. Her death is the end of an era for our country and we enter a new era under a new monarch. Today we have come together as a school to mark her passing.

This is a significant moment for all of us, this is our lived history. The significance of the moment for you may well amplify over time. But don’t underestimate the impact this will have on us all.

As your headteacher it is for me to say something right and fitting to meet the importance of the Queen’s passing. I will admit that I did struggle last night. I am fortunate to know a lovely man called Stephen Beresford. He is a playwright. The words he chooses and how he places them alongside other words to make beautiful sense is a hard-earned skill he disguises as effortless talent. So last night I asked Stephen for help.

I asked him, “What would you say to over 1,000 pupils and staff to mark this unique, important moment?”

He told me he was truly honoured to be asked and asked me to give him a minute. He came back later that night with a speech. Rather modestly (genuinely so) he said it was a rough and ready first draft and thanked me for asking him for help with such an important task.

“Who are we? What do we stand for? What do we represent? What does it mean to be a part of this country - the United Kingdom? Does it distinguish us in any way? And does the death of the late Queen really mean anything beyond the death of a celebrity?

As young citizens of this country, you might not feel you can answer these questions. I'm not sure I can. But I suggest that the long life and reign of Queen Elizabeth II points us towards certain principles which seem, however obliquely, to sketch out an answer.

Firstly, we have to grapple with the question of constitutional monarchy. What does it mean?

Well, we - the British - have devised a system of governance which, on the one hand, seems to celebrate aristocratic continuity, but is actually part of a very radical tradition.

Long before the revolutions of most other nations, we executed our King (in 1649) and instituted a republic. We were very fast to experiment with various systems of bureaucratic or theocratic rule, but our parliament - for better or worse - felt that the authority of a monarch was the only thing that could really galvanise and empower the word of the nation's elected representatives, and so they invited the exiled Charles II to return and reign as King - although with certain conditions (these conditions were very important).

This schism between Crown and Parliament is re-enacted at every state opening of parliament. You may have seen it. The Monarch's representative approaches the House of Commons - just as Charles I did during the civil war - and finds that the door is slammed in his face.

The door is then reopened, and he announces that the Queen commands all members of the House to attend her in the House of Lords.

But we (and they) know that the command is only theatre. The Queen reigns by the permission of parliament.

Why does this matter? And why is this system, and the Queen's 70 years of service, still important?

Because in the principle of constitutional monarchy we have established that there is something in this country which is higher than money. Higher than celebrity. Higher than anything. When the Queen ascended to the throne in 1952 - scarcely ten or so years older than many of you - she made a pledge.

'My whole life, whether it be long or short, shall be devoted to your service.'

So, as you try to understand the deep feeling of the nation over the coming days, try to understand that we have not just lost a monarch - a crown-wearing, distant, grand figure - we have lost the greatest and most devoted servant that the public of this country has ever known.

The service continues. The crown passes. And so, although we mourn the death of our Queen, the first thing we have to say - and most particularly to you, the first, youngest citizens of his reign, and of this new exciting age, is -

God Save the King.”

'Our thoughts are with the Royal Family, our country and The Commonwealth at this time of bereavement and mourning. The passing of Queen Elizabeth II, is a significant moment in our history and we reflect on an incredible life lived in dedicated service. Our young people learnt more Queen Elizabeth II and her inspirational 70 year reign earlier this year when we joined the nation in marking her Platinum Jubilee in June. Only now do we realise how present she has been in our lives as we look again at the footage on the news and at the notes and coins in our wallets and purses and the stamps on our letters. We are grateful to her for her steadfast leadership and compassion.'