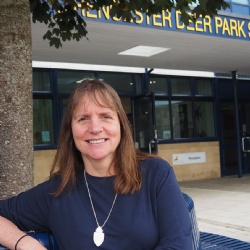 The departure of Chiquita Henson as Headteacher

During the last week of the Summer 2022 term, staff and pupils marked Chiquita Henson’s departure from Cirencester Deer Park School as Headteacher. After 19 years, Chiquita Henson moves into the full time post of Chief Executive of The Corinium Education Trust, or Trust Leader as she would prefer to be called. This is a post she has held part time alongside her role as Headteacher for the last 4 years.

While she was appointed headteacher in 2003, Chiquita Henson’s association with the school is significantly longer. After completing her PGCE in Bristol in 1984, she joined the staff at Katharine Lady Berkeley’s School in Wotton-Under Edge as a teacher of English. After 4 years there, Chiquita Henson was appointed to the post of Assistant Head of English at Cirencester Deer Park School. During her time at the school Chiquita Henson held several posts of responsibility, including Head of English, before moving onto the school’s leadership team as Assistant, then Deputy Head in 1994.

With 34 years of service at Deer Park, Chiquita Henson is currently the school’s longest serving member of staff by 7 years. There are only 3 other members of staff who were appointed before the year 2000.

As Head, Chiquita Henson has been responsible for, or involved in, the recruitment of 85% of the school’s current teachers and 95% of the support staff. 36 members of staff are younger than Chiquita Henson’s entire length of service at the school, with one having been born after she commenced her headship!

Pupils have always been at the forefront of Chiquita Henson’s leadership.

During her headship, Chiquita Henson has been responsible for the education of approximately 4,800 pupils over her 19 years and, if you add her time as a teacher from 1989 as well, this rises to nearly 7,000. She has taught many of our current pupils’ relatives, including parents and at least one grandparent! She is always pleased to catch up and learn of their progress in the world beyond the school.

I remember we celebrated my appointment to the post of Headteacher as a family with a trip to Legoland. I have been on a fantastic roller coaster ever since and the twists and turns, especially over the last two years, have got even tighter and sharper.

When I was first appointed, they erected a new school sign, but this time with no headteacher’s name on it. I don’t think anyone thought I would be here so long.

While this piece is explicitly about me, my leadership has never been just about me. It has always all been about our school and the learning community within and round it and how we welcome others and work in partnership.

I am extremely grateful to everyone who has contributed to Deer Park’s learning community during my Headship. I am proud of what we have all been able to achieve together and for the way in which all members of our learning community have embraced our vision.

I would like to thank the present staff, extended and strategic leadership teams, governing body and trustees. My colleagues work tirelessly for our pupils and, each one is tenacious and delivers bravely and boldly. At times we have had to make some tough decisions, but we have always aimed to do so with integrity. Something I have always tried to do as Head is keep the wolves from the door. I have tried to deal with the ever-changing educational landscape in a pragmatic way so that we can all concentrate on the important things: our pupils, their learning and life chances.

Cirencester Deer Park School is very special to me for many reasons. It is a great place in which to learn and work.

Thank you for letting me be headteacher and lead this school for much longer than I or anyone else first thought! It has been a great privilege and joy.

As Trust Leader of the Corinium Education Trust, my association with Deer Park will continue. I wish Richard Clutterbuck, new Headteacher, and all members of our school community every success in the future.’