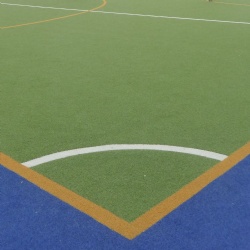 Girls and football at Deer Park

Year 7 and Year 8 Girls have had the opportunity to play football in their PE lessons since January 2022 and Girls' Football has been running as an extra curricular club after school for all our year groups since January too. We have had great interest and support with over 40 girls attending the club, some of whom play in mixed or all girls' teams outside of school.  Although football is often viewed as a male-dominated sport, with almost 3 million active female players, football is the biggest women's team sport in England.

At the end of March 2022, our U14 and U16 girls' teams played in the District Tournaments at Rednock School, the first time the girls have had the opportunity to compete in a school football team in the last two years. The U16s accrued 5 points throughout their tournament and the U14s got to the semi-finals. The pupils thoroughly enjoyed the experience and were a credit to the school.

Niamh (Year 10) "It's good that we have been fortunate enough to have the opportunity to play football against other schools in a tournament, I really enjoyed it."

Martha (Year 7) "It was really fun and everyone was very welcoming, so it was a great experience."