In tutor time on Wednesday 10 November 2021, pupils at Deer Park watched an online assembly on the theme of Remembrance. Such is the power of technology, we were able to reach back more than 100 years to note the first Armistice Day on 11 November 1919, with images of soldiers marching past the Cenotaph in London. The key messages of Never Again from the first Remembrance to this year’s theme that Remembrance is for Everyone were echoed throughout the assembly.

With the spirit of Never Again and the heroism and sacrifice of those who died in conflict to protect others firmly in our minds, together with the principle that remembrance is for all, Cirencester Deer Park School marked Armistice Day on Thursday 11 November 2021. At the eleventh hour on the eleventh day of the eleventh month, we paused for two minutes in school to mark the armistice (an agreement to end the fighting of the First World War as a prelude to peace negotiations), which was signed between the Allies and Germany at 11am on 11 November 1918. Although originally to remember those who had died in WW1, Armistice Day is an opportunity to remember all those of all nationalities who have died in all wars, including civilians.

Across the school site, pupils and staff stood in silence for 2 minutes at 11am. Year 7 led the Remembrance, lining up in silence at the front of school while other year groups stood in silence in their classrooms, the sports hall and on the playing fields. The youngest girl and boy in the school lowered the Union Flag to half-mast, a number of our pupils who are cadets were present in uniform and two of them laid wreaths of poppies at the base of the school flag poles, whilst a rendition of The Last Post was played across the school grounds.

"I enjoyed leading the cadets out to lay the wreaths by our school flagpole. I was extremely proud to be asked to do this." Max (Year 11)

I was impressed by how quickly our Year 7 pupils fell respectfully quiet once they joined us around the cobbled area at the front of the school. As the Union Flag was ceremoniously lowered, it was a time for everyone to reflect and, after The Last Post was played, all that broke the silence was the rustle of leaves as they fell to the ground behind us. It was very moving.

Over 100 years since the end of World War 1 and the deaths of an estimated 17 million people, we are reminded once more of the importance of dialogue between nations and the need for peace. 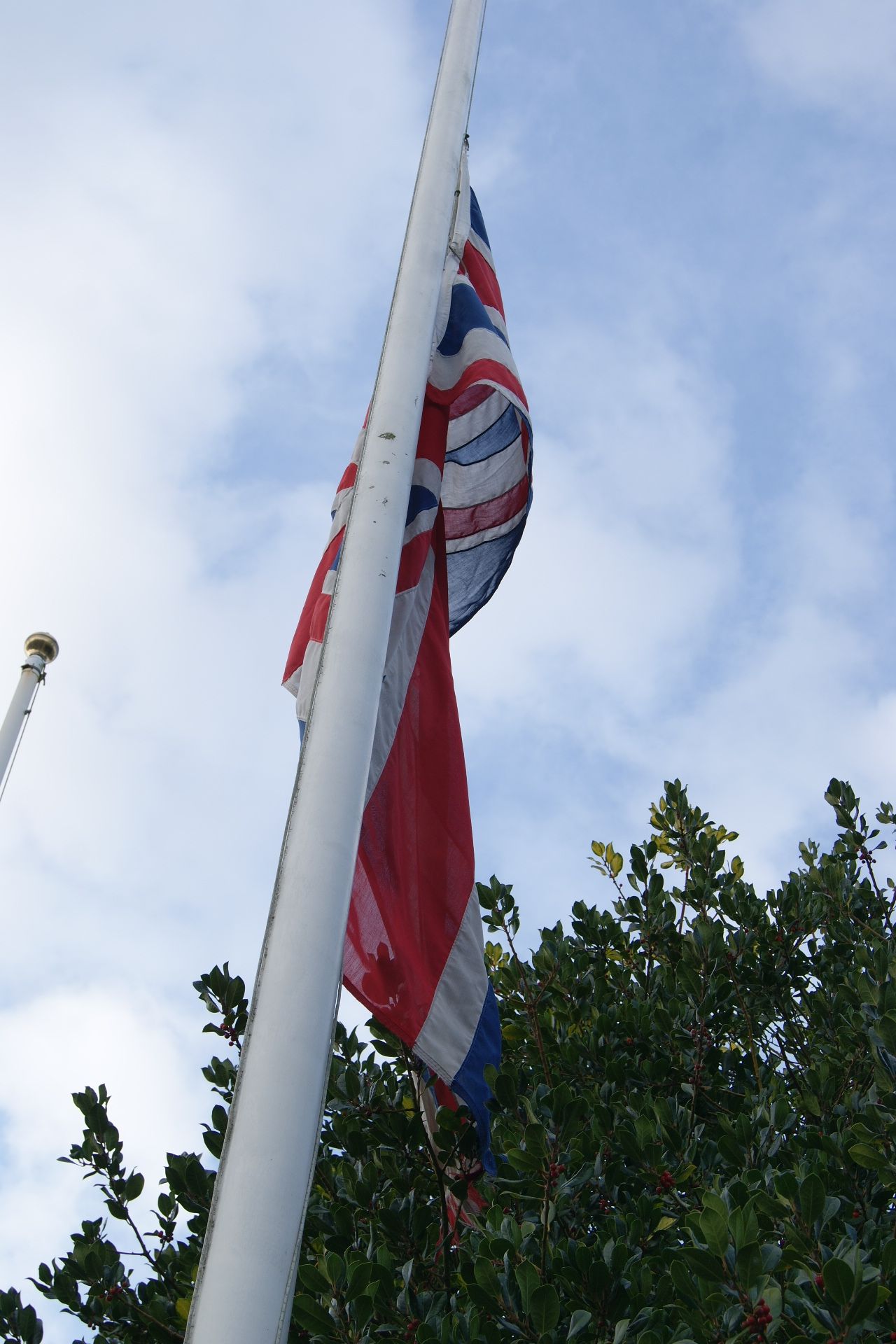 In Flanders Fields
by John McCrae

In Flanders fields the poppies blow
Between the crosses, row on row,
That mark our place; and in the sky
The larks, still bravely singing, fly
Scarce heard amid the guns below.

We are the Dead. Short days ago
We lived, felt dawn, saw sunset glow,
Loved and were loved, and now we lie,
In Flanders fields.

Take up our quarrel with the foe:
To you from failing hands we throw
The torch; be yours to hold it high.
If ye break faith with us who die
We shall not sleep, though poppies grow
In Flanders fields. 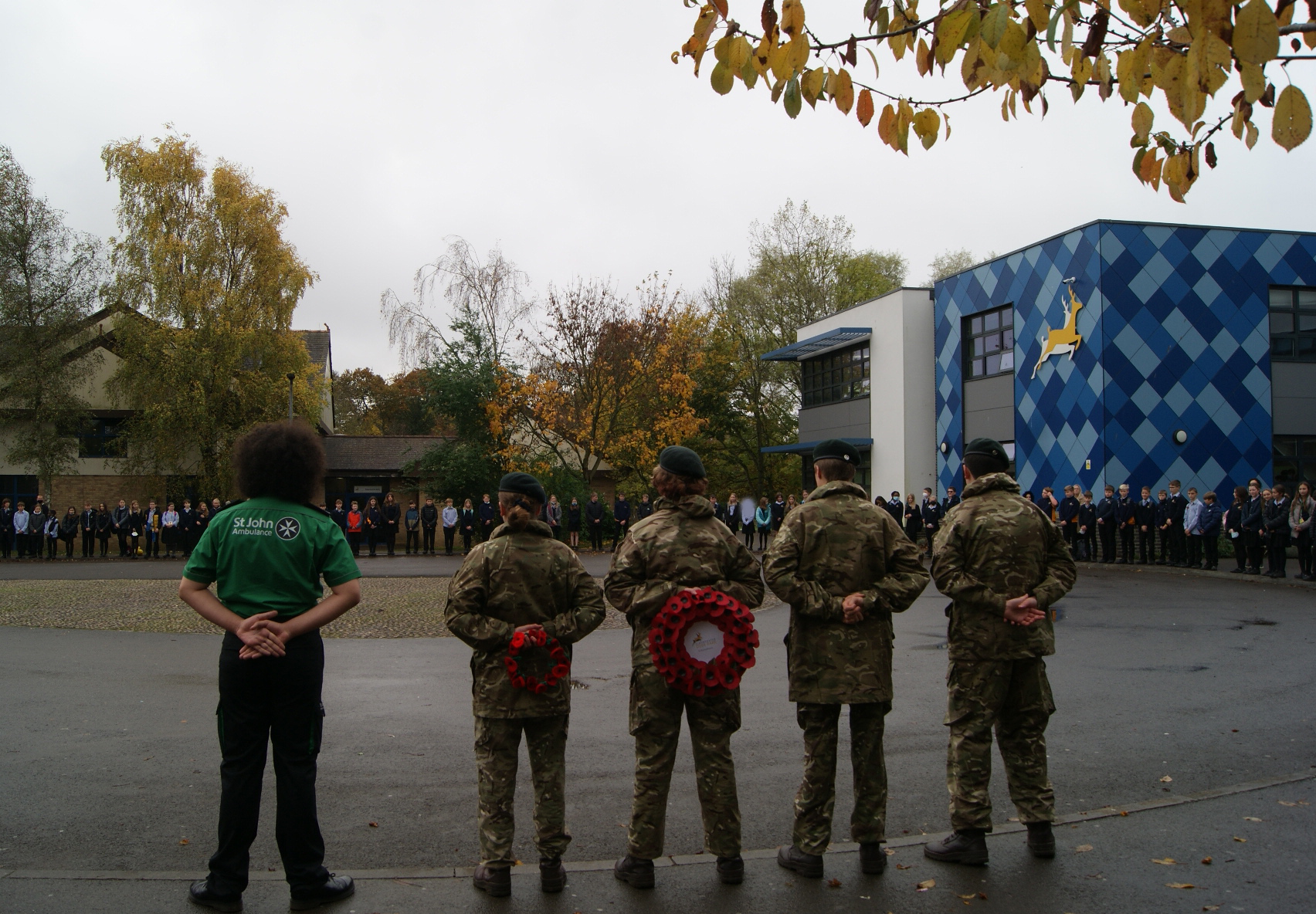 Year 9 poem by Allegra, studying a response to the poem 'Poppies' by Jane Weir

Red streaked bandage,
death lingers within the sky.
Fired eyes and hope-filled souls,
gallop upon ever-fighting stallions towards their fate.
Desperate clouds gripping the sky:
blockade the sun's smiles.
Overflowing bodies litter the crackled ground
As man gazes upon his fallen brothers up on piles
He starts to ponder was it worth fighting
neck to teeth, like rabid hounds.
Only then do they lay in their grave
poppies bleeding across misshapen fields.

We honour the fallen soldiers who fought savage battles.

In previous years our Year 7 pupils studied the powerful Michael Morpurgo book 'Private Peaceful' in English and for a number of years pre-Covid our pupils had the opportunity to travel with guides to the battlefields of Belgium, to see for themselves just what the soldiers, both fictional and real, went through. The guides helped pupils and staff understand the scale of death and destruction. If you have been to the battlefields, you will know that the Commonwealth War Graves Commission cemeteries are places of beauty and peace for so many who were sent to their senseless deaths.